Rain Or Shine, We Are Moving Forward! 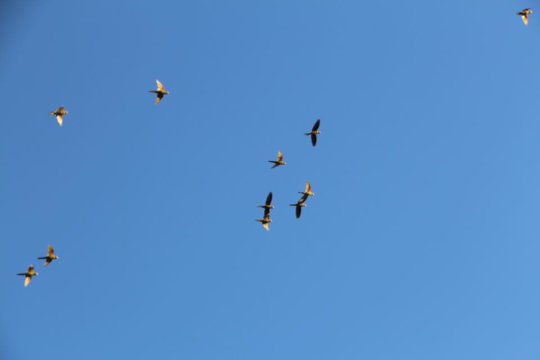 A few of our released Conures

With all of the rain we've had in SoCal these past few months, everything is looking so green! Including, as always, our wild parrots. The wet weather has helped their non-native food sources grow and bloom, so we are looking forward to seeing if that will lead to a higher number of eggs being laid during the very fast-approaching baby season.

Last month, we were finally able to release 12 Conures that had been ready to go for weeks. The weather delayed our release efforts. In the past when we have released around inclimate weather, we have a higher number of birds return as rescues in the days following the release. I like to call them "boomerangs", because they come right back when you send them away. Yes- these bird are wild, and YES they can easily survive during rainy or windy days, but going from a rehab facility back into the open urban wild can be a lot to manage at first. We opt to set them up for success in whatever ways we can, which includes waiting for better weather to plan our releases. I am happy to report that all 12 were happily released and have not boomerang'ed back to us!

Along with the usual day-to-day rescue and care of wild parrots here at SCP, our co-founder Josh has been overseeing the contruction of our brand-new, innovative, multi-enclosure complex at a new location south of where we currently operate. Honestly, the way Josh and Brooke have planned the new flight aviary layout is perfect for our needs. With this new facility, we have 24 acres to work with (as opposed to less than 2 that we use now), so the potential is immense! We have launched a new fundraiser to assist with covering construction costs, and will be hosting an online silent auction in May as well. Your continued financial support through Global Giving will still be allocated for daily parrot care, of course!

Once the new building is complete, we will be putting together a big HOUSE WARMING party to celebrate. The event will be a way to share our new location with our friends and supporters, and hopefully gain some more local community support for our cause. The additional space means we can rescue so many more birds!

Thanks again as always for your continued support of our work and our cause. The birds are healthier and happier because of you. 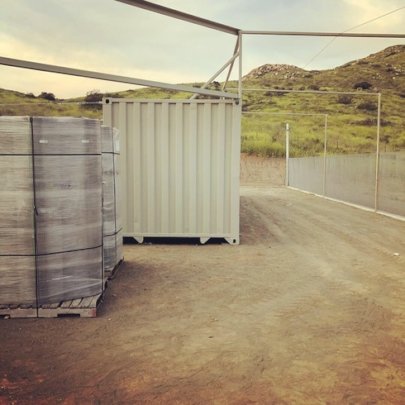 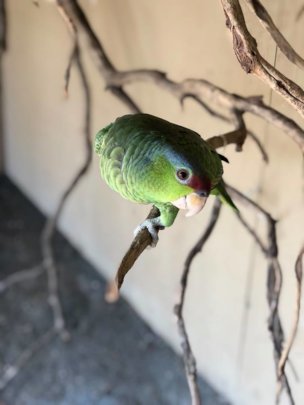 Hello and happy new year! We had a lot of successful moments in 2018, but it was a record-breaking year for our intake numbers as well. We are very excited to be looking forward to this new year and all of the potential it seems to bring along with it.

Thanks to your continued support, in 2018 we were active in the rescue of nearly 160 birds! Compared to 2017's final total of 118, that is huge! We believe the drastic increase is likely due to a crazy heat wave that came through right in the middle of Amazon baby season; many juveniles were found on the ground, assumed to be in need of help, and brought to a rescue facility. We are working on more easily-accessible information to share with SoCal residents about what to do when they find a parrot on the ground. Hopefully, with more education and resources, we won't see so many juveniles come into care.

Along with our record-breaking intakes came large-scale releases in 2018. For the first time since our inaugural release in 2014, we split the Amazons into 3 separate releases. In addition to multiple releases, we were also very proud to have 2018 be the first year we released in a location other than San Diego. Previously, we had been unsuccessful in tracking down the evening roost site for Pasadena's Amazon flock. This year, with the help of local volunteers, we figured out where they were sleeping. In total, we released more than 45 Amazons back into the Los Angeles area, and close to 25 back into San Diego. Now that we have some experience with long-distance releases, we plan to do as many as needed. This ensures the birds who are rescued from a specific area can be returned there, thus allowing the flock population to grow in a more natural way.

Finally, something I am especially excited about, our new construction project and expansion broke ground in mid-2018. Josh and his crew have been hard at work getting the area cleaned up, road graded, and new flight enclosures put up. We held a couple of fundraisers online to support the construction costs, including a Giving Tuesday campaign and silent auction. Please be on the lookout for additional fundraising opportunities in the coming months. Our goal amount is $15,000 total, and we have already raised about 10% of that. The new enclosures will be larger, easier to access and clean, and allow us to rescue even more birds in the coming year!

As always, thank you so much for your support of our efforts. It is only due to generous donors like you that we can continue to rescue wild parrots, educate the public about them, and further actions to protect them in our area. 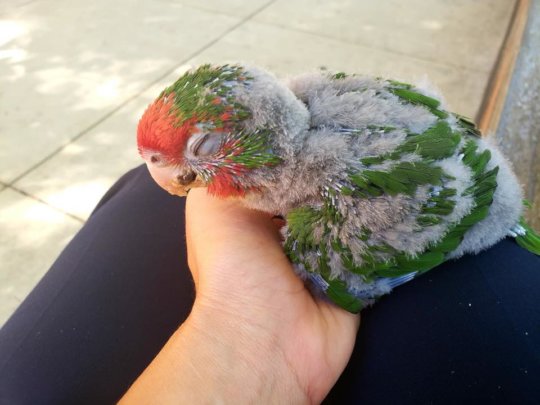 Thank you so much for donating towards the care of our wild parrot rescue patients! It is only with support from you that we were able to rescue a record-breaking number of birds over the past few months. In total, SCP was active in the rescue of 85 birds from July to mid-September 2018. Eighty-five!

Luckily, both Amazon and Conure baby seasons have ended as of late September. In previous years, we saw a drastic decrease in our monthly rescue numbers by this time of year. However, just like during Summer, our numbers aren’t dipping as low as before. While this means more work and resources required, we are very happy that our organization is known so well throughout the region.

Rather than bombard you with more stats and numbers, I’d like to spend the remainder of this report sharing a story of a little Conure (nicknamed “Emmett”) who came to us recently.

About a week or so into August, we received a call from a member of the public regarding a nestling-aged Conure she had in her care. The bird was originally found by a friend of hers, and had seemingly fallen out of his nest in a very tall palm tree. The woman who called us had been caring for this bird for several days, and had understandably developed an emotional attachment. She even hand-fed him every few hours! Although she was very attached, she also understood that this bird was wild, and she believed he should be given his best shot at being free. When she offered to drive him down from Los Angeles to drop him off with us, we were ecstatic. It is rare to find someone willing to make that trip, as it is usually a staff member or volunteer driving up from Jamul instead.

Generally, the best way for a baby wild parrot to remain truly wild is to put them with other birds of the same age and species. On the morning Emmett arrived, we also received a call from our rescue partners at Wetlands and Wildlife in Huntington Beach. They had 3 nestling-aged Conures in need of care. It was kismet! Emmett was only alone in the brooder for about an hour before the three newbies arrived. Since then, we have taken in a dozen more young Conures. They are all wild and on their way to eventual release back into the urban wild. Aside from his colored leg band, we can’t even tell Emmett apart from his foster brothers and sisters now!

This story is important, as it shows how much work a single rescue really takes. Someone found Emmett, someone else cared for him, he was driven from LA to Jamul, he has spent 2 months in our care with other young birds as his foster flock. Emmett’s success is a testament to the hard work and efforts of all wild parrot-lovers in Southern California. We hope he can inspire other folks to help whenever they come across a wild parrot in need.

Here are some photos of Emmett when he was young. Photo credit to Nurit K, who so lovingly cared for Emmett and sent him to us. 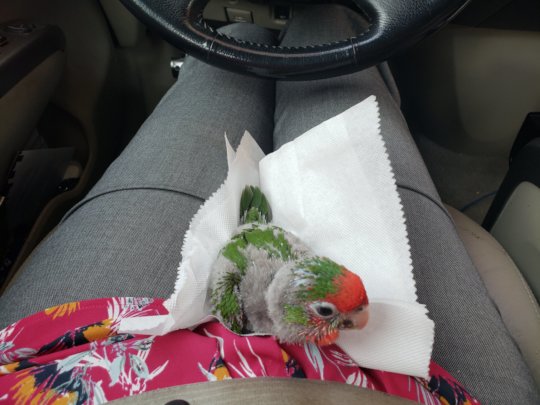 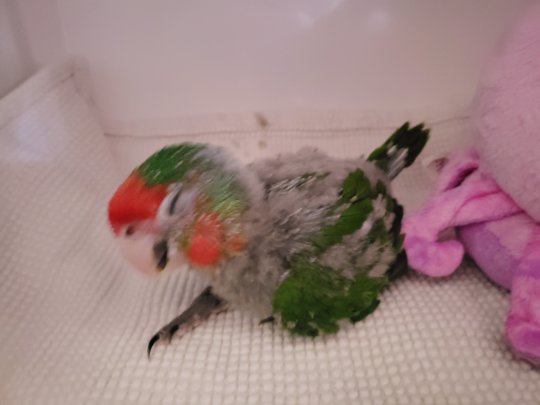 Emmett in the brooder 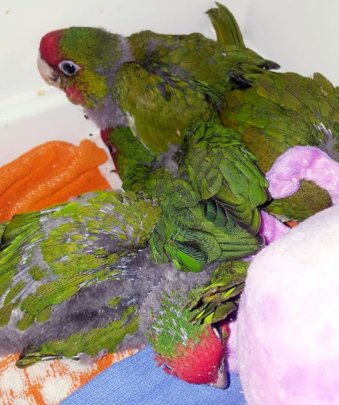 Emmett with his 3 new siblings!
‹ 1 2 3 4 5 6 7 8 ›
WARNING: Javascript is currently disabled or is not available in your browser. GlobalGiving makes extensive use of Javascript and will not function properly with Javascript disabled. Please enable Javascript and refresh this page.