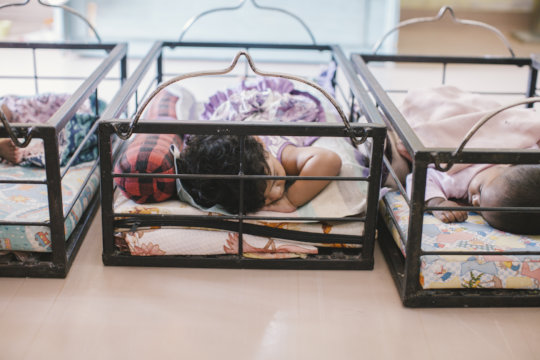 Our Snehankur adoption center has been helping abandoned children and their mothers for the last 15 years. We may be an adoption center but our focus has always been on our vision of helping and supporting women and girls who face difficulties and discrimination in their pregnancies and supporting their babies once they are born. Our support goes beyond the safe birth of the babies as we counsel and support mothers to take their rightful place back in society, with or without their babies. In fact, we are still in contact with the mother of our first ever adopted child.

We never know what each new day will bring, facing a range of challenges while rescuing and rehabilitating innocent infants and / or young mothers. As Mother’s Day approaches we would like to share a story of one of our brave mothers who overcame adversity to bring new life into this world. Sneha is just one of many girls who we work with forced to make difficult choices in the face of gender bias, age old traditions and societal pressure.

A bright student who was pursuing a career in civil services Sneha (21 yrs) had cleared the preliminary round of the required competitive exams for these positions and was getting ready for her finalswith some private training classes. Here she met and fell in love with a fellow student who promised to carry their relationship to the next level and Sneha came to trust him. However, when she fell pregnant, and asked him to marry her he made his excuses and fled.

Sneha was terrified to tell her parents who belong to the farming community and are from a low economic background. Ignorant to her situation, they took some private loans against their farm land and reduced the burden of supporting Sneha by forcing her into a marriage. Sneha did really well at hiding her pregnancy from her husband and in-laws, but as soon as she delivered her baby her new family immediately abandoned them both. While her parents were in a state of shock Sneha was also suffering a mental breakdown. On hand was one of our volunteers who took control and called our team. The call came in at 4am and, our team member Santosh started out immediately on the 3.5 hour journey for the government hospital where Sneha had given birth, accompanied by a nurse and a female care taker. After counseling Sneha and her parents, he brought them to Snehankur, our adoption center. After completing the legalities, Sneha and the baby were taken to a private hospital for check-ups and treatment. The gynaecologist advised that Sneha and child needed to be admitted for observation and treatment as both were mentally and physically very weak. Sneha’s hemoglobin count had dropped to 5% and she needed an urgent blood transplant and medication. Her baby boy also required special ICU as he had a low birth weight.

After few days of hospitalization, with neither her parents nor her in-laws willing to take her back, Sneha returned to our adoption center to start the process of relinquishing her son. She seemed to be still under tremendous pressure and shock and the next day she completely lost her vision. Our ever alert team rushed her to an ophthalmologist who referred her to a neurologist who advised this was a temporary blindness, psychosomatic in nature,that would recover in time.

Sneha has gradually recovered and regained her normal vision and her son is also fit and healthy and awaiting adoption. With all other support gone, Sneha is grateful that Snehalaya is helping her to continue to pursue her exams and reach her career goals.

So we would like to thank you for supporting us to continue to help girls and women like Sneha, offering alternatives to their innocent babies and helping them to fulfill their dreams and forget their nightmares. 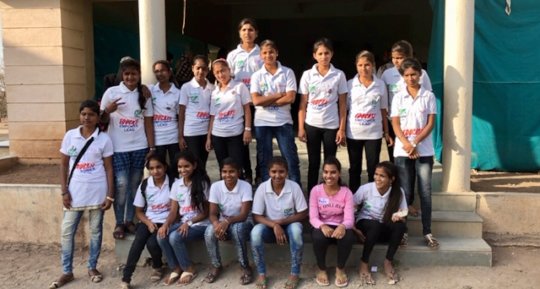 Thank you so much for your support in helping to educate the street children in urban communities. You can never over estimate what a difference you are making.

Last Saturday we hosted four workshops for eighth and ninth standard girls from our city schools in a program led by our Malala peer mentors who you are helping support. Our peer mentors, recruited from our slum schools and shelter home have attended a year-long campaign supported by Malala Fund to end the exploitation of children. The Educate.Empower.Lead. campaign gave them the skills which they were able to use to manage and present over the whole day. They helped nearly 70 local school girls conduct practical exercises to enable them to plan and manage their own awareness and advocacy campaigns to promote girls’ education in their schools and communities. At the end of the day they made a pledge and were inaugurated as our newest Malala peer mentors. They will report back on their progress on 12 July, Malala Day, and we can’t wait to see the impact they make.

As part of the workshop we shared a recent report issued by Malala Fund on the state of education in India. This reports that 25% of boys and girls are unable to read 2nd Standard text, 36% of girls and 38% of boys are unable to read English, a core subject, and 42% of girls and 39% of boys are unable to do basic arithmetic. These shocking statistics show why our work in our slum schools is so vital. Our after-school study classes focus on the basics of reading, writing and maths to ensure that our children can do better in the curriculum taught in their schools. We also supplement this with ad hoc activities in other subjects. For example, last month, our seven slum schools took part in a science exhibition, showcasing experiments and science knowledge to their peers, families and community leaders. You can watch highlights from the science exhibition below.

Joining the children was Aniket. A former beneficiary and now mentor and example to the younger children, he overcame many challenges to enroll in higher education.

Coming from an extremely poor background, he lived in one room with his mother, father and two sisters. His father, fuelled by alcohol, would often be abusive and make life tough for the young Aniket .

He dropped out of school and became a drifter, getting in with bad company and making a meager living selling Vada Pav, the ubiquitous Maharashtrian potato snack. Life seemed pretty aimless for Aniket and he was never far from trouble. That was until one of our Balbhavan education coordinators saw the potential of this young man and helped turn his life around. They spent time mentoring him and gradually involving him in their education projects and counseled and encouraged him to go back to school. Seeing he had a keen interest in football they helped him form a football academy coaching 20 boys from the nearby slums. Many of his team have played at state and national level under his training.

He is a talented and natural host of our Balbhavan Annual Cultural Shows and wins over even the toughest of audiences. His talent is also on display at the regular street plays that we perform in Ahmednagar. He and his fellow performers have won several trophies proving what winners they are.

Nowadays you’d wonder how Aniket finds the time to pack so much into one day. But that he does. As well as studying animation at his local college he provides a helping hand and is a popular figure at a nearby hospital where he works the nightshift. On top of this, he continues with his football coaching, can often be seen climbing poles to fix electrical faults in his community and is a regular volunteer at the slum community halls helping and mentoring children to take the right path.

His real dream is to become an actor, and he can be found practicing in front of the mirror every day to perfect craft. The good news is his dream has already become a reality as has just completed filming his first feature film taking a lead role in a Marathi movie.

Aniket is just one example of how your support is helping to improve the lives and help give kids access to an education that would otherwise be denied. Thank you! 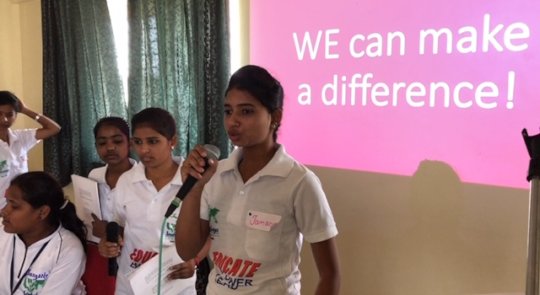 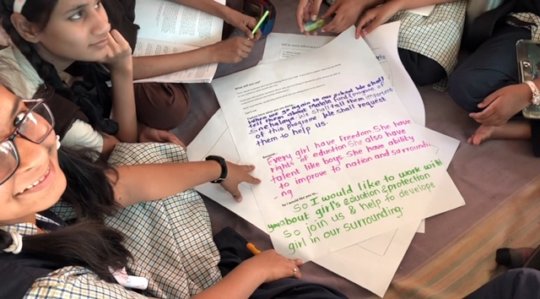 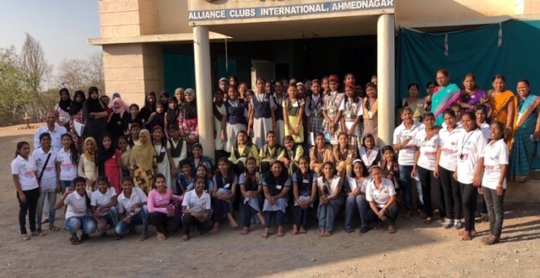 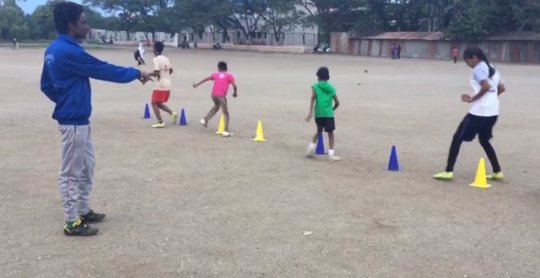 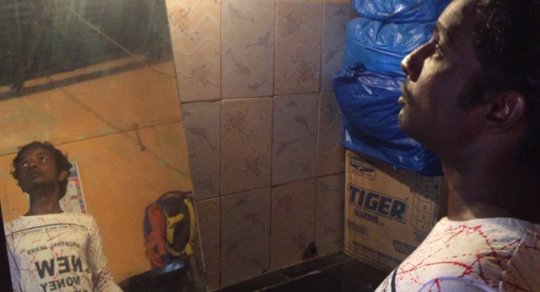 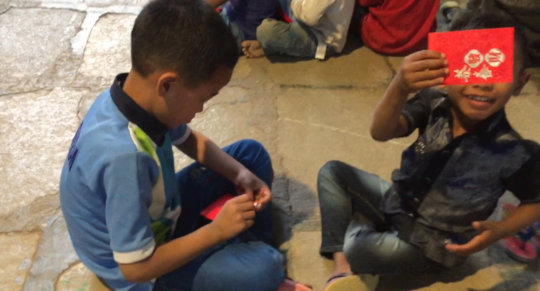 Prosperity for the Year?

Happy Holi and a big thank you for providing so much colour to our beneficiaries lives.

Remember what it was like when sitting your exams was just around the corner? After 8pm its study time here at Snehalaya and you can hear a pin drop as the kids begin to prepare for their up and coming exams. As you know at Snehalaya we are committed to stopping second generation prostitution and this we have successfully done since the opening of the Rehabilitation Centre in 1989. We believe that education is a powerful tool in society and we are equipping the kids with what is essential to take into their futures so they won’t be exploited like so many of their mothers have been. We’re sure you’ll join us in wishing the best of luck to all the students at this important time.

Many of the women who are in the sex work profession for various reasons often find it hard to leave but, as reported last August, we offer the women an escape route by setting them up in small businesses through our Sneha-Saksham program. One such lady who took up this offer is Sonali. After years of suffering abuse and hardship, for the sake of her daughter she left the red light area to begin a new life by starting her own tea and snacks stall. Hear her inspirational story in her own words in the short film made for ‘International Women’s Day’ below.

There is one date in the calendar that will offer some light relief at exam time and that is the Holi Festival (Festival of Colour) which is being celebrated today.The major Hindu festival welcomes in the spring because it is believed the season is full of color, and that’s exactly what you see as colors of all varieties are poured over anyone who happens to be standing nearby. transforming them into a human rainbow! This festival of joy is always eagerly anticipated at Snehalaya as special sweets are distributed giving the kids the sugar rush they need to dance for hours covered with every color you can imagine.

We are also preparing to meet and greet our new batch of volunteers from University of Leeds, UK. This year has seen people from all over the globe come to offer their skills and help with the further education and development of the Snehalaya children. We carefully screen and select volunteers who can contribute relevant skills and experience and this year's successful applicants provided cultural exchanges from Germany, Switzerland, Basque Country and for the first time - China. English teachers, Bobo and Jessie introduced the kids to their culture by celebrating Chinese New Year. The kids were shown how to use chopsticks, made dumplings, had their names written in Chinese, created special lantern cards and all were given lucky red envelopes containing Yen. The kids had a great time as well as savoring a whole new experience courtesy of our friends from China. 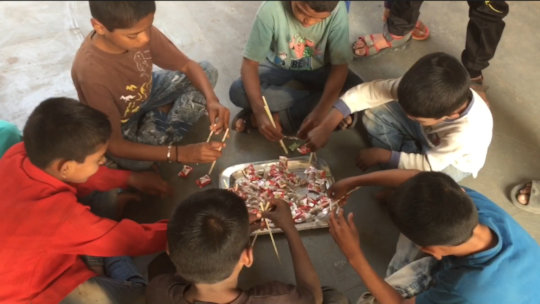 Can You Play Chopsticks? 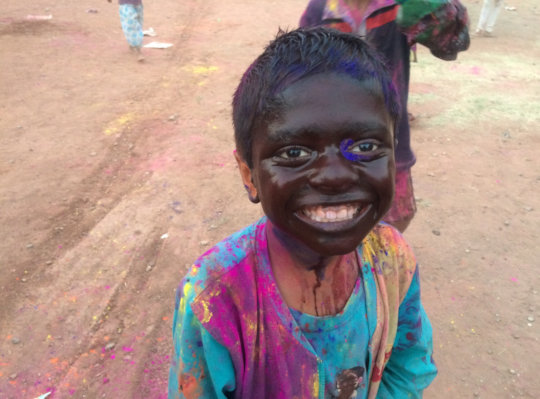 How Big Can A Smile Get? 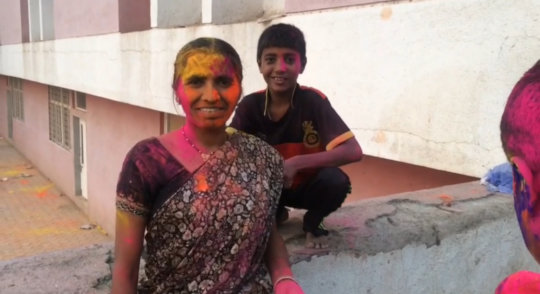 ‹ 1 ... 5 6 7 8 9 10 11 12 ... 35 ›
WARNING: Javascript is currently disabled or is not available in your browser. GlobalGiving makes extensive use of Javascript and will not function properly with Javascript disabled. Please enable Javascript and refresh this page.