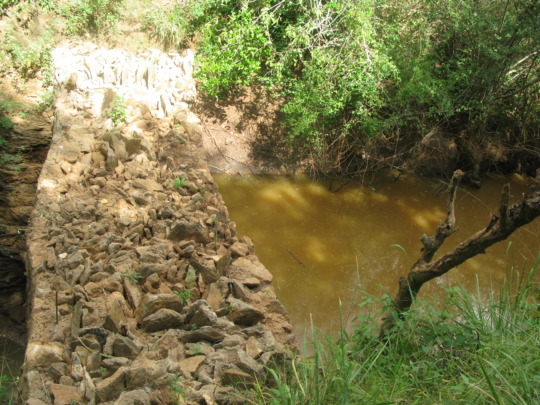 Regina, a resident of Mutulani reported, “The community is still laying strategies of achieving their longed dream of accessing adequate and safe water for their domestic needs. In particular joint efforts are underway to secure Kyanduu earth dam through constructing a fourth sand dam to prevent silting and increase water quality as well as quantity”.

The photograph captures the 3rd sand dam that was constructed last year to reduce siltation of the Kyanduu earth dam. One side of the dam is higher than the other so when it rains one end fill up with water and the overflow goes through to the other side cleaner (from the filtration barrier when solids get to settle down) before  the water flows to the main earth dam.

The community through Mawe is planning for a major campaign through approaching various individuals, organizations and the County government to support in initiating a sustainable water project.

Increased quality and quantity of water for Mutulani 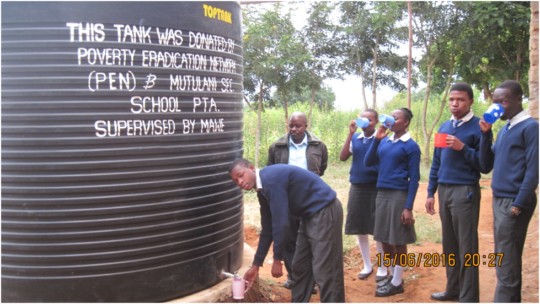 The Mutulani community through Mawe CBO requested PEN to support their two community schools with more water tanks to harvest rain water for increased amount of clean water.  Two 10,000 litre water tanks were bought for the two schools. The Mutulani primary school acquired a second water tank to secure another month of clean drinking and safe water by the school children

Mr. Masila the Mutulani Secondary school Board of Management Chairperson reported that though the rains did not fill the new water tank donated to the school, the students have some clean water to keep them from taking water from the dam which is muddy.

John a form three student also appreciated the donation of the water tank to their school remarked “when it rains and the tank fills up with water, our lives will be changed for the better due to access to safe drinking water and this will reduce cases of water borne diseases therefore improving academic performance of my school mates”.

PEN also donated two desktop computers to Mutulani Secondary school in efforts of supporting the students acquire Information Technology skills. In his closing remarks, the Mutulani Secondary School Principle cited PEN as among the institutions which have supported the Mutulani community in enhancement of both community and academic education through Global Giving among other initiatives. 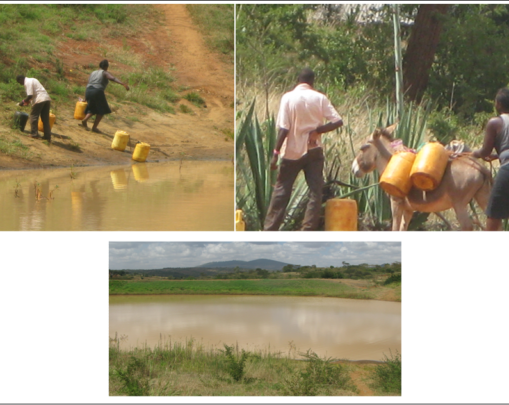 source of water and transportation

PEN Staff visited the Mutulani community in mid March 2016 and noted the following;

That the water Tank provided to Mutulani Primary School has been providing clean and safe drinking water for only one complete month when it is full of rain water.

By the time of the visit, the tank was empty and the Mutulani primary deputy headteacher reported that the rain water harvested in January was used up in February. She noted that when the tank is dry, the children carry water from their homes where she said that the quality of the water cannot be trusted since it is drawn from the open earth dam or other unreliable sources where water is mucky and not treated.

A standard five pupil reported ‘I did not carry water today because my water bottle broke and I have to borrow from my friend and the water is usually not enough for both of us’. Another group of school girls approached reported that ‘when the water tank is empty of rainwater we normally have to share with students who carry water from their homes or remain thirsty until we go back home.’

The Mawe CBO leadership also expressed the dire need in the secondary school which by the time of visit, the school was buying water which was being drawn from the nearby Kyanduu Earth dam. The School Principle reported that buying water that was ferried by donkeys was expensive and this water was not enough for all the needs of the school because water is needed for the Boarding students use, the science Laboratory, cooking and cleaning.

The community requested PEN to support the Secondary school to acquire a water tank to increase the amount of safe drinking water as well as adding the primary school a second tank to ensure another month of drinking clean especially during this month when the long rains are expected.

Procurement process is ongoing to purchase the two water tanks, one for the primary school and the other for the secondary school. This will be a cost shared effort between the PEN Global Giving project and the schools where the schools will construct the base of the tank and pay for the gutters and tank installation while the project will purchase two 10,000 liters water tanks.