By By Mary Mutuku - Project Officer

This project report covers the period between October and December 2017. The project; provide safe and clean water for 1500 children and women is aimed at improving water supply to Mutulani community, in Makueni County.

In an interview with Ms Francisca Kimuyu, a Mutulani resident and a member of Mawe CBO, she had this to say about the project in the reporting period, “During this period, the area received the October-December rainfall however it was poorly distributed. The crops germinated, grew and never managed to produce because the rains stopped in the third week after the onset. This has made the water sources reduce the amount of water for the people and livestock this calls for the community to focus on the water harvesting techniques trained earlier to tap more water in the next rain season. Hopefully the County Government reported to have approved to equip our Borehole that was drilled by Poverty Eradication Network (PEN) through the support of GlobalGiving UK. It is our hope that things will move faster now that the electioneering period is over because the extended political period in the country has not been giving room for meaningful development to take place.

I am indebted to PEN and all our donors through GlobalGiving for the support to Mutulani community. This project has opened a lot of opportunities and brought more light that has held the community together and plan for development of our area”

PEN is looking forward to undertaking the above once the pump is installed and water distributed to the schools and the community. PEN will also train the project management committee to oversee sustainability of the water project and initiate a WASH programme within the two schools. The initiative will include a water recharge system for the already sunk borehole and hygiene programme (hand washing, improving toilets and girl’s sanitation to improve health and keep the children in school towards improved academic performance

PEN and the Mutulani community are grateful to the commitment of our donors who have been tirelessly supporting this project. Many thanks and happy new year 2018 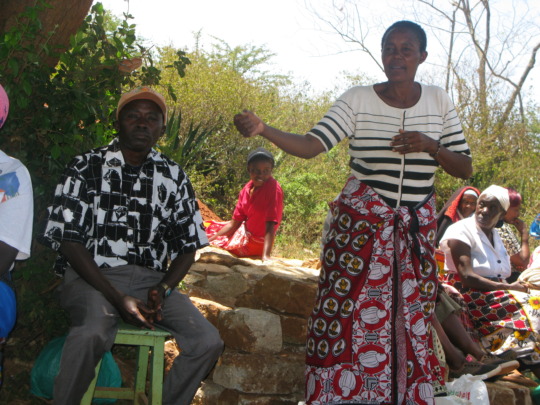 This report covers the period between July and September 2017. The project; provide safe and clean water for 1500 children and women is aimed at improving water supply to Mutulani community, in Makueni County in Kenya. So far, milestones have been witnessed by the community as exclaimed by Petronila, a community member, who expressed gratitude to the project and had this to say; “since PEN initiated this project in our community, we have witnessed streaming of benefits ranging from being educated on development issues such as water harvesting and good governance. Three water tanks within our schools for storing water harvested from rain waiter, a sand dam in Kyanduu River boosting the water storage and now the recently drilled Borehole which when fully equipped will ensure constant water throughout the year. We won’t tire in appreciating GlobalGiving and our Donors for these transformations in our community”

Achievements during the period

Meeting with the Governor

Poverty Eradication Network (PEN), the Mutulani schools and the community leadership have been meeting various partners to discuss possible partnerships in equipping the drilled borehole with a water pump, water storage facility, water distribution facility and installation of pipes for distribution of water to the Mutulani Primary and Secondary Schools and to the members of the community. We are hopeful that we will be able to complete this project phase once the political climate calms down after contentious presidential election slotted for October 2017. The Makueni County Governor has given the team assurances of his willingness to support the completion of the project as envisioned.

Development of a new project

PEN is in the process of designing a second phase of the project which focuses on upgrading what has been achieved to-date, with the main focus being on environmental conservation particular the recharging of ground water so that the borehole has sustainable and increased water inflow. This is critical because the ground water levels have been going down in the entire county due to heavy extraction and little effort to improve ground water recharge. We also want to improve value addition by proposing ways in which available water can be used effectively with little wastage as well improved sanitation, cleanliness and hygiene within the two institutions. PEN and the community are grateful for the continued commitment of our donors who have been tirelessly supporting this project

The flowing water in Mutulani 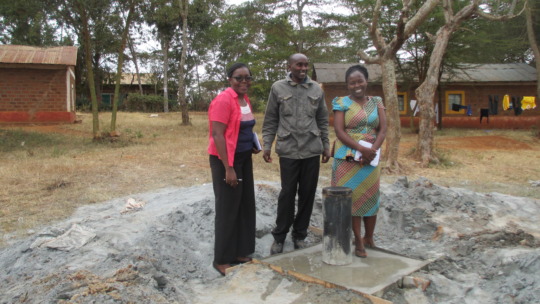 The site of the borehole.

It is my pleasure to present our project progress report for the 2nd quarter (April-June 2017). The project; provide safe and clean water for 1500 children and women, aimed at improving water supply to Mutulani community, in Makueni County, Kenya. The journey that was started in the year 2014 is now bearing the long awaited fruits following the flowing water that was witnessed on 30th June 2017

Achievements of the second quarter include:

Following the investigations of the borehole by WRMA & NEMA on the effects to the environment and the people within Mutulani after drilling, it was found that the borehole will benefit the community and will not cause any negative impacts to the area. NEMA License No. 0041810 of 19/05/2017 and WRMA Permit No. WRMA/30/KBZ/3EC/12667/9/11 were issued and paved way for the actual drilling

Poverty Eradication Network (PEN) contracted Kisima Drillers Company with the task of drilling the borehole according to the requirements issued by the Hydro-geological surveyor-Aquawel. Kisima Company was identified after a rigorous procurement process where they emerged the best. The drilling took place from 25th - 26th June 2017. The test pumping exercise took place from 30th June to 1st July 2017. The Borehole drilling report, water chemical analysis report and the test pumping report have been produced and the results indicate that the water is safe for human consumption

The drilled water requires a water pump to bring it out for use, installation of two storage tanks, electricity installation and pipes to distribute the water to the two schools and to the community. The post drilling activities mentioned above will cost £24,615.38this will actualize the dream of accessing water for use by the two schools and the community. PEN and the Mutulani community are engaging Makueni County Government to support the borehole with a water pump and distribution pipes. PEN will train the project management committee to oversee sustainability of the water project and initiate a programme of hygiene and sanitation within the two schools.

We are indebted to GlobalGiving and our donors who have sacrificed towards making this dream a reality. We are kindly calling upon well wishers and our donors to continue supporting this noble cause 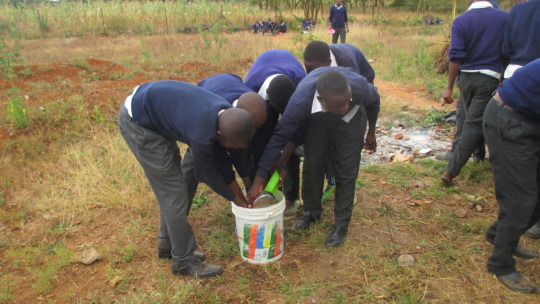 What the students currently use to clean dishes. 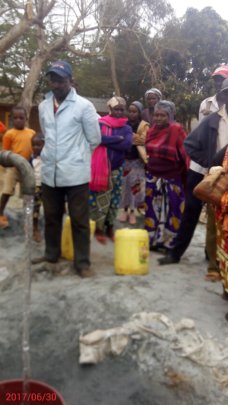 Some of the women who will benefit from the water. 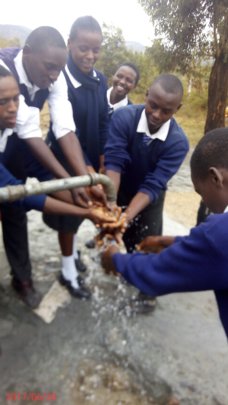 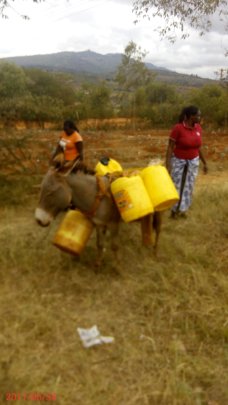