Family Planning in Nepal and the 'gag rule' 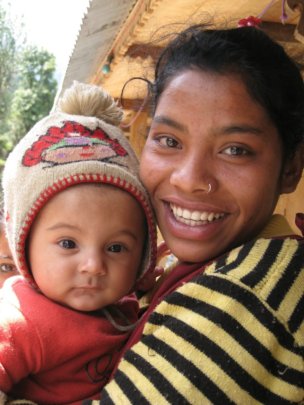 Access to family planning information and intervention is of crucial importance in Nepal’s efforts to reduce maternal and child mortality, and improve the health of Nepal’s children and their families.  Our Health Educator at the Rajbash Community Hospital, Mrs. Anjala Phunyal, spends a good deal of her visits to the communities of Rajbash explaining reproductive health and the importance and means of family planning. Mostly her audiences are women who still shoulder most of the responsibility for pregnancy prevention. Out of 26 attendees at a recent free healthcamp on vasectomies and implants (IUDs) only one was male.

As of May 2017 a newly reinstated American policy, called the ‘Gag Rule’, will make Mrs. Phunyal’s job much more complicated. Here is some background:

As we learned from a New York Times article by renowned Nepali journalist Subina Shrestha, Nepal used to have ‘a very high maternal mortality rate. For every 100,000 live births 539 women died’ back in 1996. It is believed that one of the reasons for these deaths was ‘unsafe abortions’. Until abortion was legalized in 2002, many women were imprisoned for having had abortions.

Like many very poor countries, Nepal had to rely on aid from other countries to provide health care.  Apparently the US became the largest donor to fund health and also family planning services, and Nepal started to make progress in reducing maternal deaths.

It all became very complicated when in 2001 the new US president (G.W. Bush) re-imposed what’s called a ‘global gag rule’ (a law left over from the Reagan years but reversed under Clinton) which suspended the US funding of overseas organizations that provide abortions or counsel patients on issues surrounding abortion.

The Family Planning Association of Nepal, the largest provider of contraceptives, lost part of its American funding. They had to lay off large numbers of health workers and their mobile clinics in rural areas. The provision of contraceptives was substantially reduced. Family planning in Nepal was profoundly set back.

Under President Obama the ‘gag rule’ was lifted again and the Family Planning Association of Nepal received a USAID grant of more than $5 million over four years. Health workers were hired to organize health camps and screenings for STDs and uterine cancers. Family planning advocacy efforts restarted and again much progress toward reducing maternal and infant mortality was made. This progress is now in jeopardy.

The newly reinstituted ‘global gag rule’ signed into law in May is now called the ‘Protecting Life in Global Health Assistance’, and while its funding covers international health programs such as those for HIV/AIDS, maternal and child health, malaria, family planning and reproductive health, the rule prohibits US money from funding international family-planning clinics that promote abortion or provide counseling or referrals about abortion services.

For healthcare organizations to stop providing abortions would be neither easy nor the right thing to do. In many places, one clinic serves multiple functions — taking care of women and children, treating HIV, testing for sexually transmitted diseases, offering family planning and contraceptives and sometimes abortions or abortion counseling — all extremely important functions.

In very poor, rural areas of Nepal, a legal abortion can mean life or death for a woman who gets pregnant unintentionally. If she can’t get a legal and safe abortion, she may opt for an illegal and dangerous one. In the case of an unmarried female, she may have to face the wrath of her family. Although State Department officials say that an abortion referral in the case of rape, incest, or to save the life of the woman is exempted from the rule, many providers are expected to refuse to sign on to an agreement that will generally restrict them from offering abortion services to those who need them.

Ms. Shrestha states: “American aid has made a very valuable contribution to women’s health, but these policy reversals undermine it. Nepali women’s welfare is vulnerable to the whims of each new administration.”

Dr. Naresh Pratap K.C., an official from the Health Ministry’s Family Health Division says: ”The impact of this will be huge.”

The restrictions under the new ‘gag rule’ will make Mrs. Phunjal’s job that much harder as they take critical family planning options away from women in one of the world’s poorest countries.

To read the entire article by Ms. Shrestha go to International New York Times, Feb. 10, 2017: ‘Donald Trump Redoubling on the gag rule and its potential effects in Nepal‘. 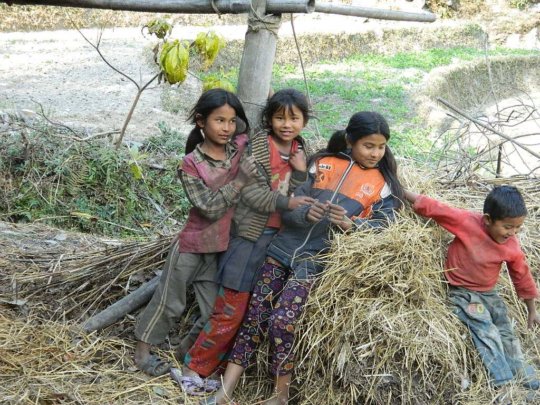 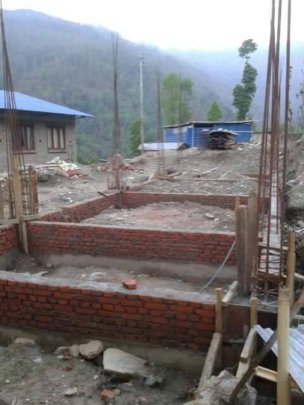 Foundation for kitchen destroyed in earthquake

The Nepalese Constitution addresses health care as a fundamental right, stating that every citizen has the right to basic health services free of cost. The reality, however, is far from this vision. While in urban areas access to care is readily available to a large percentage of the population, remote rural areas are often too far from a hospital or healthpost for people to benefit from timely treatment.

To remedy this situation, the Nepalese Government has made a push to establish and certify more Community Hospitals in rural Nepal.

Over the past two years, the DCWC’s Rajbash Hospital in the remote Kavre district has earned the trust and respect of the Nepalese government, and especially the Health Ministry. Recently our small hospital received the designation of ‘Community Hospital’ from the Health Ministry.  In Nepal a Community Hospital has to have 51 beds; since our existing hospital to date has only 15 beds, DCWC was granted the funds to build an additional 36 bed hospital to adjoin the current 15 bed one.  Also included in this grant are the funds to equip the new hospital to a functional level.  A new X-ray machine, financed through this grant, has already been delivered to Rajbash and immediately put into service by the overjoyed hospital staff. Work on the foundation for the new portion of the hospital is proceeding as we write. However, construction is not expected to be completed for at least another year.

While very generous, this grant does not include any provision for increased operating expenses. Increased capacity will require an increase in qualified staff. As of now a plan for how to meet these future expenses has not been worked out.

A second construction project is underway: The original hospital kitchen, in which the staff cooked for themselves and for patients, was badly damaged during the devastating earthquake two years ago. Thanks to funding generously provided by a long time supporter of the hospital, rebuilding has started in April; the foundation is being completed as we write. The staff is anxious to move the current make shift kitchen operation into the new building.

Inspite of all the ups and downs and changes in Rajbash, our staff has finally coalesced into a tight little group, united in the knowledge that they are doing important and noble work. Our friends from DCWC UK who visited Rajbash in April commented on the smooth running of the hospital and the sense of unity between staff members.

*Karin and Patrick visited the DC Headquarters of GlobalGiving in April. We were warmly received and so glad   to meet in person those who have assisted us over the past few years and are always ready with advice and encouragement. GlobalGiving will be sending a representative to visit Rajbash in the coming months and will provide us with feedback of their impressions.

*Our Nepalese founder, Akka Lama, visited and gave an update on happenings at the hospital and the charity.

*Steve and Jeanette Gross once again created a very successful fundraising concert while Akka was here.

*The Annapurna Basecamp Trek in April was a great success. More on that and pictures in our next report. 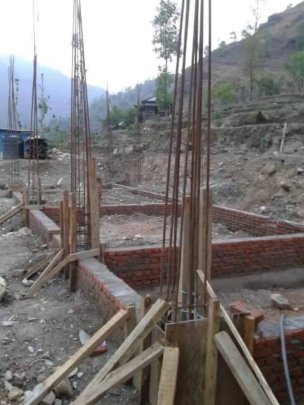 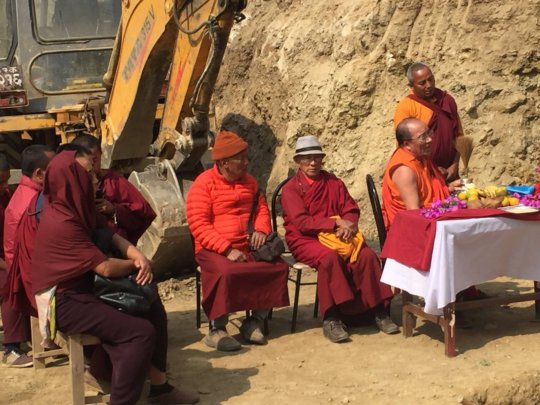 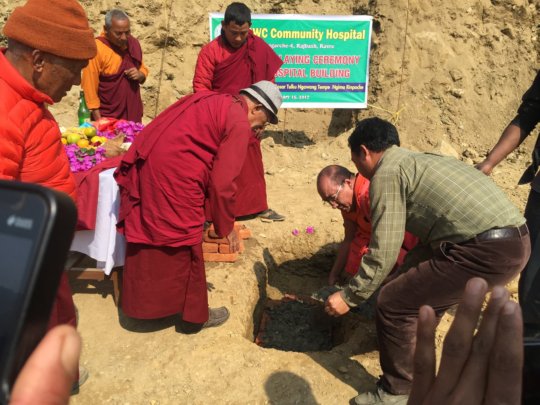 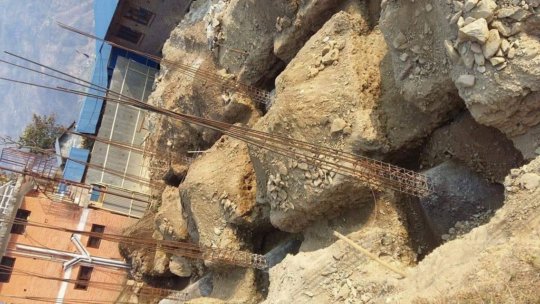 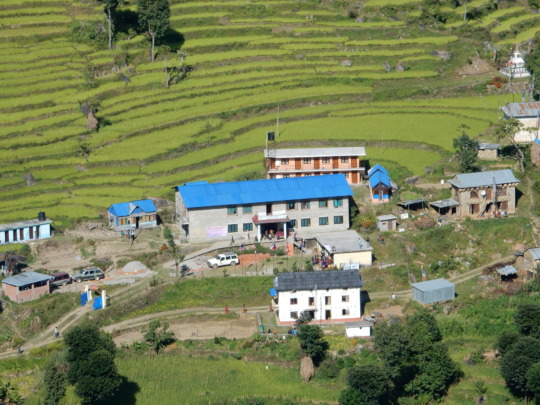 Sometimes, when coming to the computer to write a new report about the Rajbash Community Hospital, there does not seem to be much that’s very exciting or out of the ordinary to report (the kind of news that we here in the US are so addicted to).

However, were we to actually be in the village, at the hospital, “exciting” happens every day:

Water borne diseases, infectious diseases (we recently had some Typhoid cases), Gynecological issues, CVS & Respiratory Problems, broken or torn limbs, lacerations, mental breakdowns, pediatric illness - our staff deals with all of them day in, day out.

To us our hospital staff are true heros. Their commitment to the hospital and to helping their fellow Nepalis is astonishing and exemplar. Theirs are not ‘cushy’ jobs offering lots of distractions or even the presence of family nearby. Rajbash is a tiny, very remote, community of only a few dwellings - and the hospital. And the mountains and the river. They have the village and each other. Still, they are fully dedicated to their calling as healing professionals and available to their patients 24/7.

For nearly seven years the hospital has been a beacon of hope to the subsistence farming population of this very rural area. Every life touched through the dedication of our staff is a life educated, mended, healed, or saved. And it has been made possible by the caring and generous contributions of many individuals in many countries, but particularly the US. We are infinitely grateful for your participation in this ‘noble adventure’ and hope you will continue to support us into the future. 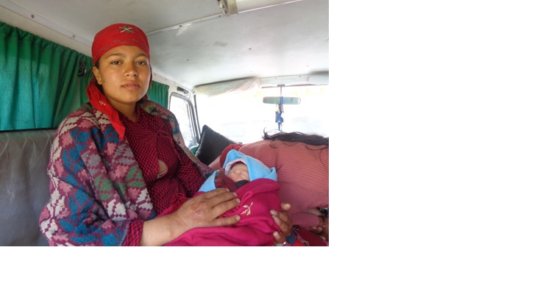 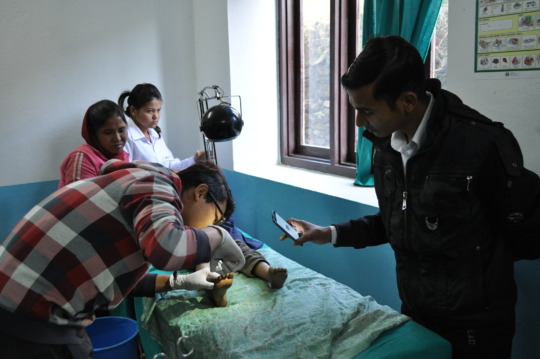 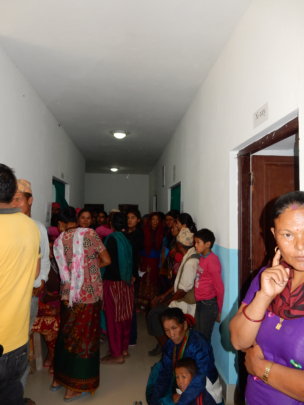 Waiting in line at free healthcamp