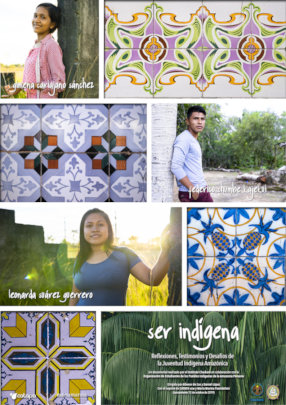 Last month, we finally released the audiovisual project "Ser Indígena" (Being Indigenous), which consists of a documentary and a photographic exhibition. The project is the result of a long work with the students themselves, with the aim to show their reality, dreams, and challenges, and to reflect on interculturality and what it means to be indigenous in the context of a more and more globalized community.

In this documentary, we get to know Jimena from the indigenous Achuar people, an Environmental Engineering student in Iquitos, who dreams of cleaning up the pollution that almost 5 decades of oil activity have left in her territory. We also get acquainted with Federico, a Language and Literature student from the Awajún people, who aspires to improve education in his community. Finally, we accompany Leonarda to her native Tikuna community on the Amazon. Leonarda is a Nursing student who hopes to contribute to the health of her people by combining traditional practices and modern medicine.

During the 50-minute journey, the viewer endorses the struggles, dreams and aspirations of these young indigenous students and their peoples, raising awareness about the importance of indigenous youth accessing higher education in order to choose their own destiny and become a fundamental part of this multicultural society.

Close to one hundred people attended the premiere in Iquitos on the 12th of October, the date coinciding with the International Day of Cultural Diversity (or Resistance Day, as some indigenous groups call the Day Columbus first arrived to the Americas). We also plan to project the documentary in educational institutions and other public spaces in the city to create broader awareness around the reality of indigenous students in Iquitos.

At the same time, we opened a photo exhibition in a popular café in Iquitos, portraying pictures taken during the production of this documentary. The exhibition has been visited by hundreds of local Iquiteños and tourists alike.

For the students, it has been a very important and enriching experience. They learned how to plan and organize an audiovisual production, and wrote their own script. Furthermore, they improved their communication skills and were proud to show and see themselves reflecting on their own identity. We plan to do more of this in the near future.

More support to fulfill their dreams...

Besides this successful audiovisual experience, we continue supporting the Organization of Indigenous Peoples Students from the Peruvian Amazon (OEPIAP) organizing training courses, receiving and guiding new students upon their arrival to the city and throughout their university matriculation process. Oepiap elected a new student leadership in July, who will carry on the work of the prior board, continuing the negotiations with the regional government in order to fulfill their biggest dream, to have access to a piece of land and build their own student residency.

Once again, we thank you for everything you continue to do to support indigenous youth in the Peruvian Amazon. 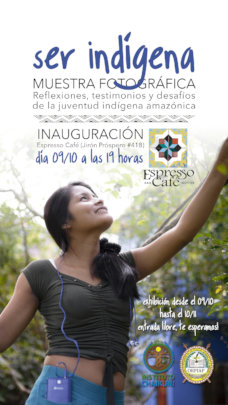 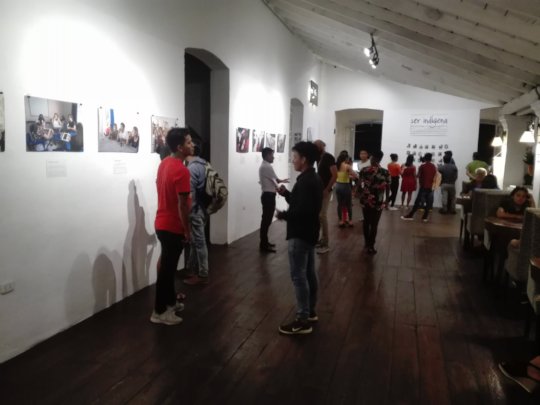 Enjoying the photo-exhibition with the students
Sep 16, 2019

The Amazon is Burning 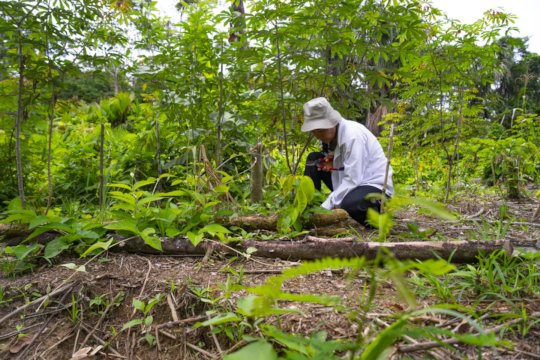 Agroforestry expert Silvia in the 'chacra'

The Amazon is on fire! As you must have seen in the news, tens of thousands of forest fires are raging across the Amazon rainforest, and continue to spread through the region at an alarming pace. The fires haven’t reached Peru – yet. However, they have devastated immense areas in Brazil, Bolivia and Paraguay.

While some fires are attributed to increased drought (unnatural in its occurrence and directly linked to a changing climate) most are deliberately set by humans seeking to clear the forest to expand business. In Brazil in particular, agri-business interests and cattle ranchers continue to set fires across vast swaths of forest in order to clear land for soy monocultures and cattle farms, fueled by the predatory right wing policies of president Bolsonaro.

With your support, we at the Chaikuni Institute promote an alternative to harmful slash-and-burn agriculture – the method which is largely responsible for these fires. At Chaikuni we promote a regenerative and diverse agro-forestry system called the chacra integral. One of the main characteristics of the chacra integral is a technique which involves letting chopped vegetation remain on the ground, which maintains nutrients in the bio-mass and mimicks the natural cycles of the rainforest ecosystem. The chacra integral system is a sure way to avoid fires in the region, because no burning is included in this process. An intact tropical rainforest is so humid that it is far more resilient to the spread of fires. A chacra integral promises a healthy and intact piece of rainforest, producing food, medicine and timber, providing myriad ecological and economic benefits to local communities as well as the global community.

Since we held our Permaculture Design Course (PDC) in May for local farmers from the surrounding communities of our permaculture center, we’ve continued to work on bringing these chacras integrales to their homes. By the end of the year, we set the goal to have installed 8 hectares of these rich agroforestry plots with participating communities.

The pioneers of this program are the local participants of the PDC, who we are working with to install these systems on their properties. We’ve started to visit them in their homes and on their land, collecting socio-economic data to build a solid baseline, which will later allow us to monitor the progress of this project. Just last week, we held a day-long course at our center to refresh the insights and techniques we learned from the PDC, focusing on the design of their properties, and in particular analyzing the best location for their agroforestry plots. In the case of one of the participants, we have already started implementing his chacra integral.

The work is done through so-called mingas. A minga refers to a day of communal work, and is very common for our region of the Peruvian Amazon. The owner mobilizes her or his family and neighbors to lend a hand in the field and offers them food in return. Our qualified staff accompanies and guides the work, and we also chip in with some of the food offered for the working crowd. From here onwards, we will assist in many more mingas to help establish the chacras integrales in the communities.

We are as committed as ever to keep creating a movement to regenerate the Amazon, spreading awareness and know-how that will also contribute to prevent future fires. Any donation will help us to take our project a step further.

Thank you so much for your support to local communities in the Peruvian Amazon and for being part of our movement. 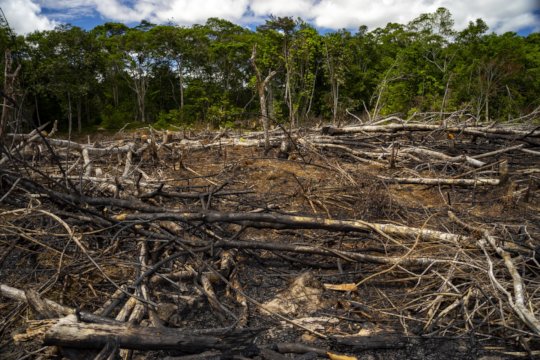 Site of a slash-and-burn technique 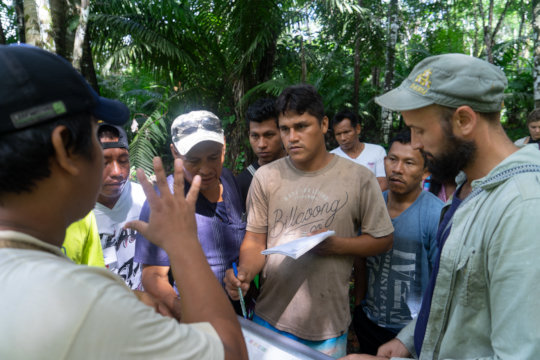 Planning the design for 'chacras integrales' 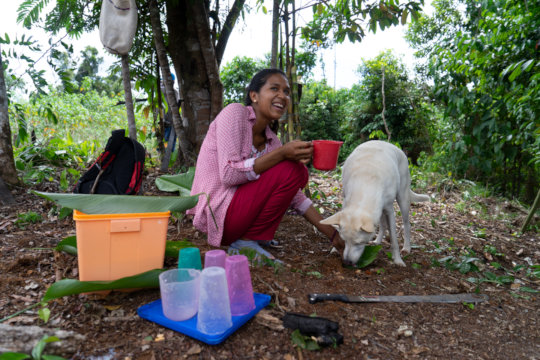 Taking a break from the heat during a minga! 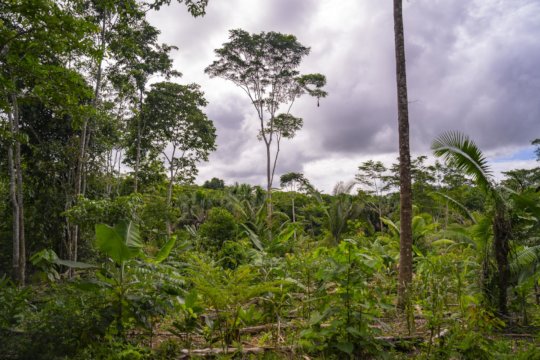 By Stefan Kistler - Executive Director of The Chaikuni Institute 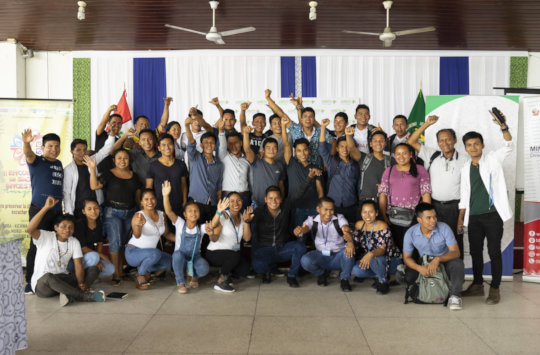 Last week, on August 9th, the world celebrated the international day of the world´s indigenous
peoples. While we at the Chaikuni Institute celebrate, learn from, honour and promote
indigenous peoples – their cultures, knowledge systems, cosmovisions, environmental
stewardship, etc. – every day in our work, we joined in the global celebration last week.
Our Loreto region of Peru is home to 31 indigenous peoples speaking 29 different indigenous
languages. For this year´s occasion, as last year, we teamed up with the local branch of the
Ministry of Culture and several other like-minded local organizations, to organize the second
encounter of indigenous Amazonian knowledge and wisdom and celebrate this incredible
cultural diversity.

Rather than being a simple showcase of “exotic” chants and dances, the event aimed at raising
awareness among the local population and exhibit a glimpse of the extremely rich cultural
indigenous heritage of our region. From birth to childhood, to adulthood, to death, and the
afterlife: 7 different indigenous peoples shared their traditions on how their culture perceives
the different stages in life with the audience in a large public park in Iquitos, through stories,
icaros (chants), dances, and rituals. Paradoxically enough, the local population in the largest
city of the region is often entirely unfamiliar with these ancestral knowledge systems.

Earlier in this week of celebrations, the Chaikuni Institute organized a full-day gathering of
indigenous youth. About 50 indigenous youth studying at different institutions of higher
education in Iquitos participated in the event, discussing their priorities on key topics such as
territory, development, health and sanitation, and their political organization. We furthermore
reviewed a preliminary version of our documentary about the indigenous students directly
with the protagonists and gathered important inputs for the finalization of the documentary.

Besides this week of festivities, we continued our advocacy to promote the project of the
student residency, exploring different concrete alternatives. However, the regional
government is very slow in presenting an alternative piece of land for the student residency
[after they announced that the land leased to the students had been designated for other
purposes (see the previous report)].

Nonetheless, we continue to accompany and support the
students in finding a new piece of land, and are exploring and defining new strategies to find
financial and technical support for the design, planning and construction of a sustainable and
ecofriendly housing project for the students.

We'll keep you updated with the latest news as we continue to run our campaign for the full
funding goal, and for the student residency to become a reality. Any donation will help to keep
us going.

We thank you for everything you continue to do to support indigenous youth in the Peruvian
Amazon.