A Ride to the Future! 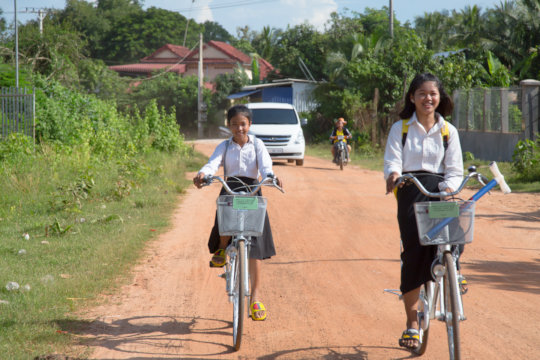 The school year in Cambodia starts in November, so to ensure students have means of transportation to school, Lotus Pedals gave away 50 bicycles to secondary school female students in Takeo Province in October.

After the giveaway ceremony at school, the program visited two students, Sreykat and Vattey, at their home and asked a few questions:
(a) if they think education is important and why,
(b) if what the new bike mean to them, and
(c) if what they imagine for their future.

Sreykat is 13 years old and studying in seventh grade. "The reason that I go to school is because I have a dream, which is to become a teacher of Khmer Literature. I think education is very important because if we are not educated, it will be hard to get a job. When we are educated, it is very easy, we can do any work," Sreykat explained. "Before getting this bicycle, I had an old bike that broke down very often and the brake didn't work either, so I was always worried that I would hit people or fall over because of the bumpy road. I am very happy to have received this new bicycle. Thank you (the donors) so much for your generous support."

16-year-old Vattey is studying in 9 th grade. Vattey wants to be a teacher and here's why: "I want to be a teacher because I want to teach my villagers to be educated so they can get a good job. I am very excited to have received this bicycle. This bicycle will help me to pursue my future. Before, I had an old bicycle to ride to school but sometimes it broke down on the way--the tire often got flattened or punctured--so I had to walk to school on 2km road."

"Sometimes my mother took my bicycle to the rice field, so I had to walk my younger sibling to school," Vattey added. Vattey is very grateful and would like to give her gratitude to all the donors for this generous gesture.

Your donations over the years have been so meaningful. Because of your generosity, we have been able to keep more than 3,000 girls in school as long as possible. We strongly hope that you will continue to stand with us to make our mission worthwhile. 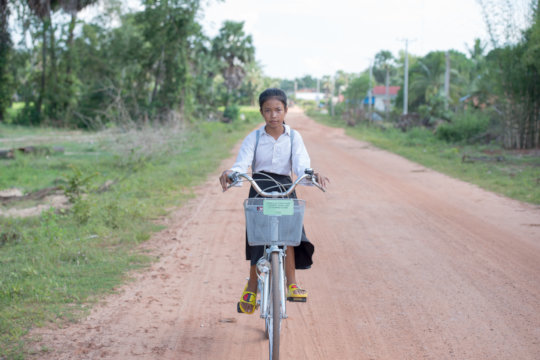 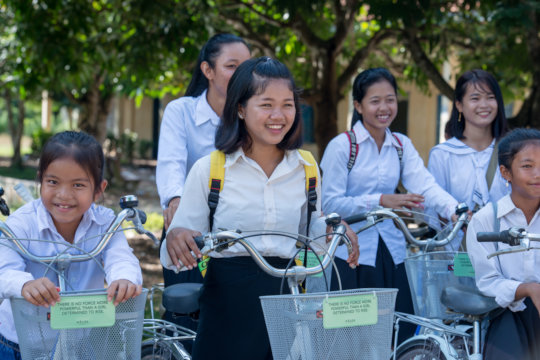 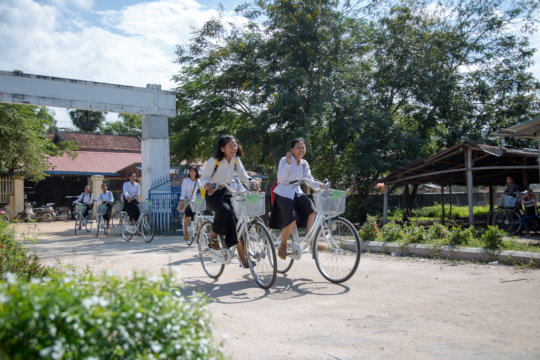 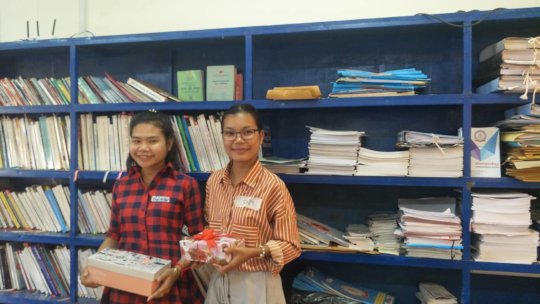 To help our scholars improve their English, as well as to stay connected with them, CATALYST has asked students in year one and year two to keep an English journal which they send to us through Facebook Messenger. The program provides small gifts as an incentive to the top three students who have written the most journal entries each month.

Since our year three students have a bigger workload at school, CATALYST has asked them to write one essay a month. In October one of our our students, Sophin, decided not to write an essay in English, but instead wrote a long reflection in Khmer showing her appreciation for the program and the donors for giving her the precious life-changing gift of education. Here is what she wrote:

"I am the luckiest person to have been in the CATALYST program. I have received sufficient support for my studies. I had never imagined I could afford tertiary education since my family is so poor.

The knowledge I have gained in the CATALYST program has exceeded my expectations. I have been able to attend many trainings which have built capacity in all of us CATALYSTAS. I still remember crying in the Self Confidence & Communication Training when I was encouraged to open up and speak from my heart.

Before joining this program, I wasn’t able to explore the outside world and I didn't have a broad general knowledge, so my thinking and expression was very limited. But I'm different now! With all the trainings that I have experienced, I have become a strong and brave person who can express and share her opinion much better both at work and school. Not everyone receives such a life-changing opportunity like this!

A once destitute country-side girl has become an outstanding student in the class at Vanda Accounting Institute and has been promoted as head of teller at Reach Thisak Micro-Finance. I wouldn't have come this far without the care and generous support of the program and all the donors. I will continue to study hard and I will not let you down. I will use my knowledge to help develop my country as much as I can. Thank you so much!" 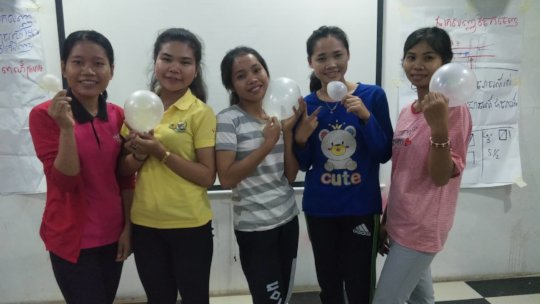 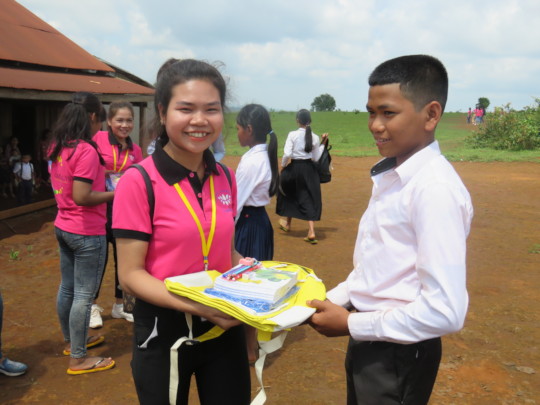 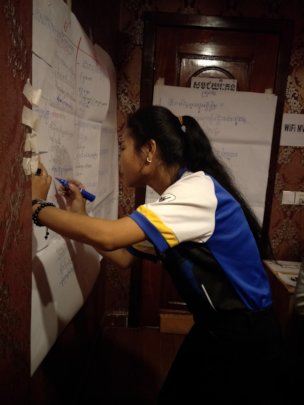 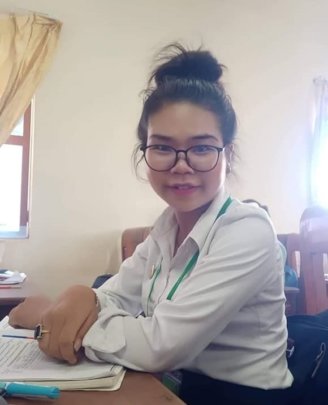 A Big Day for Lal, A Dream Come True for Kamini 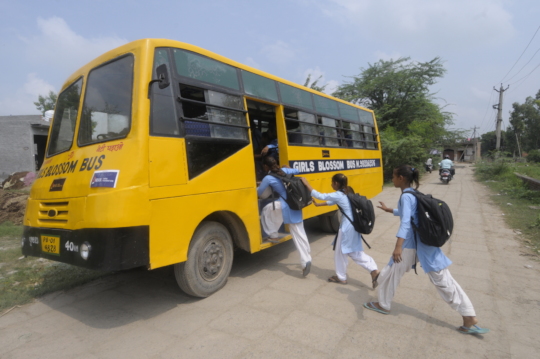 There are many obstacles girls from poor rural villages in India face simply getting to school, let alone remaining there.

In his book, Drawdown (2017), Paul Hawken eloquently tells us:

"Economic barriers include lack of family funds for school fees and uniforms, as well as prioritizing the more immediate benefits of having girls fetch water or firewood, or work a market stall or plot of land. Cultural barriers encompass traditional beliefs that girls should tend the home rather than learn to read and write, should be married off at a young age, and, when resources are slim, should be skipped over so boys can be sent to school instead. Barriers are also safety related. Schools that are farther afield put girls at risk of gender-based violence on their way to and from, not to mention dangers and discomforts at school itself."

Kamini is a recent addition to the Blossom Bus program. Her story illustrates Hawken’s views.

Kamini is from village Rajpur in India. She is the daughter of farmer, Lal, who has a small land holding, but is determined to educate his daughter. Kamini has a brother who is studying in the village school in eighth grade. Lal says that among his five brothers, none were able to study beyond eighth grade as there was no high school in their village.

When Kamini expressed her desire to study further, Lal felt he could not say no. He also wanted that for his daughter: for her to become an educated person, get a good job and earn a name for the family. Though Lal was earning a meager amount selling the farming produce, he was ready to sacrifice whatever necessary for Kamini to go to school. The biggest problem facing them was actually getting her there. Kamini would have to walk and it was four kilometers to the nearest school in Solara.

Kamini tried walking to school for some months but was facing problems on the way. Lal arranged to drop her off at school. To do so, he borrowed a motorbike from his brother, but could not do it regularly as sometimes the bike was not available and on other times he was busy with farming.

These arrangements were unsatisfactory. Kamini ended up staying home for 2-3 days a week, and for longer durations during the rainy season while the fields were water logged. It was simply not possible to walk on the muddy roads. Witnessing these problems, Lal became disheartened. He thought his daughter would drop out for sure and not able be able to complete her education.

Then something happened. Kamini came home from school one day with exciting news. “Pappa!” she exclaimed, “You’ll never guess! It’s a dream come true…there’s a free bus taking only girls to the Solara School!” The bus she spoke of? Blossom Bus, of course! That was a very big day for Lal. Lal shares, “I am now certain my daughter will complete her education, will go to college and be able to live her dreams!" 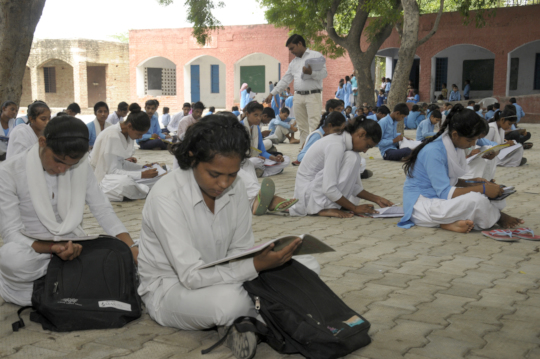 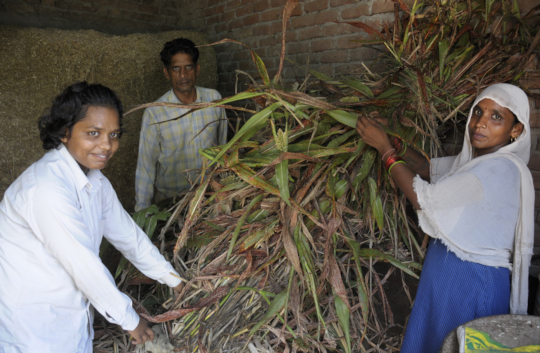 Kamini at home with her parents

‹ 1 2 3 4 5 6 7 8 9 ... 81 ›
WARNING: Javascript is currently disabled or is not available in your browser. GlobalGiving makes extensive use of Javascript and will not function properly with Javascript disabled. Please enable Javascript and refresh this page.