Postcard from The Riecken Foundation in Guatemala 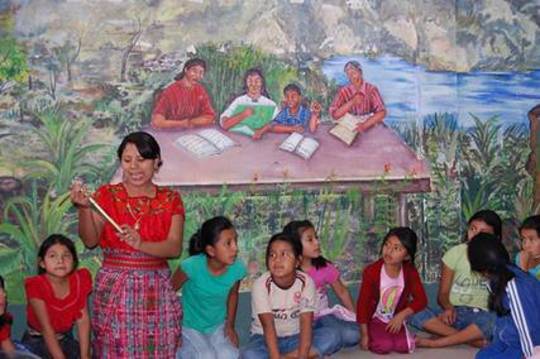 In February, six GlobalGiving donors traveled to Guatemala for a week of exploration, cultural submersion, and welcomed visits to four GlobalGiving projects. One of these projects is run by The Frances and Henry Riecken Foundation, which focuses on teaching girls how to read by involving parents and hosting educational activities at 11 community-managed libraries.

After a short boat ride across Lake Atitlan, we arrived at the dock of the tiny, immaculate town of San Juan la Laguna. Tuc-tucs transported our group up the steep hill to the town center to visit the final project on our itinerary – Creating Girl Readers in Guatemala, run by the US-based Riecken Foundation. The Riecken Foundation’s mission is to provide poor communities in Central America not just with libraries, but with access to information. However, the challenging US economic climate and diminished investments over the past several years have forced the Foundation to cut back significantly on its funding of these libraries; donors through GlobalGiving are now helping to diversify the project’s sources of financial support.

The difference between what we expected – a quiet, darkened space filled with books and shhh-shing librarians – and what we experienced – a lively, bustling center of community activity – could not have been more striking! We met Israel, the center’s director, and Olga, the librarian. Books did line the walls, but in addition, computers, games, and important information about community events and activities were present. Kids of all ages were engaged in different activities – studying, playing chess, and using the computers. We participated in a fun story hour designed just for young girls, which started with singing and movement activities, then the reading of a story about “La Mariposa” (The Butterfly) in both Spanish and Quiché, and finally, an arts and crafts activity, making our own butterflies. The space was clean, bright, and well-equipped, with colorful murals and characters from the Mayan alphabet painted on the walls. We all agreed that “lib rary” was a vast understatement of the space and important role in the community played by this center.

To check out their project page go to: www.globalgiving.org/3339

And just if you’re curious about the rest of the trip and where we headed after The Riecken Foundation: 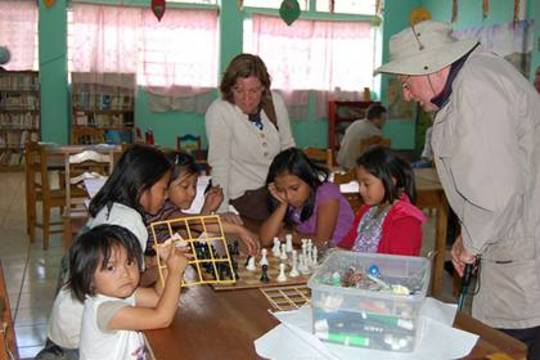 By Urbano Menchu - Rosa and the Xolsacmalja Library 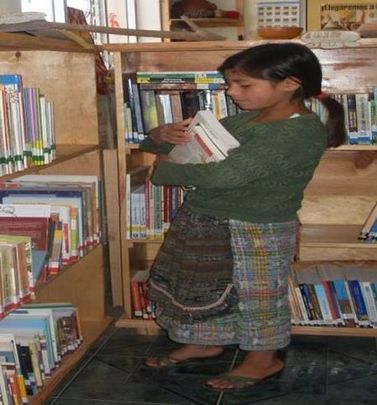 Eleven year old Rosa Elvira Chuc Castro lives in the small Mayan village of Xolsacmaljá, Totonicapán, and is in 5th grade. She lost her father when she was six years old, which has made life difficult for her, her three brothers, and her mother. However, she is very optimistic, eager to volunteer and interested in learning new things that help her to expand her knowledge. In March, 2009, a community library opened in her town and Rosa visits it every day to read about topics that interest her. Her mother decided to set conditions that Rosa could visit the library every day as long as she keeps up with her chores at home. Since she is the only daughter in the house, she has a lot to do, such as washing clothes and dishes, preparing tortillas and entire meals, watching after her little brothers, cleaning up, and more. Rosa proposed her own schedule to her mother: 9AM to 12PM, and 2PM to 4PM every weekday. This is the school vacation schedule. During the school year, she visits every afternoon to do her homework and help the librarian. She always arrives on time and always leaves on time so that she doesn’t get in trouble with her mother.

Rosa used to spend a lot of time alone in the streets of her town, receiving little support or encouragement from others to foster her personal development. When the library staff noticed she was curious about the new library, albeit shy, they proposed that she begin visiting more frequently, and she asked her mother for permission. She has become one of the library’s most consistent and helpful volunteers: alternating between reading and participating in activities and games, and helping with keeping the library clean and orderly. She has developed a love of reading, evidenced in that she has declared that one day she hopes to write her own book so she can read her own stories to other children. Rosa participates in story hours and book clubs in Spanish and Quiche (her first language) and other activities aimed at building a love of reading in girls. If it weren’t for the library’s trained staff delivering dynamic Reading programs and opportunities for volunteerism in Xolsacmaljá, it is likely that Rosa would not have the chance to gain all the new skills and experiences she has acquired this year.

Thank you for your generous contribution earlier this year which has helped us ensure these special opportunities for Rosa and hundreds of other girls like her through eleven community libraries in Guatemala. It is only through support from you and others that we are able to partner together with Guatemalan communities like Xolsacmaljá so they can generate such essential services for their communities. Please let us know what you think about our Girl Readers project, and how we can reach even more people who would like to support this work.

Have a happy holiday season and a prosperous new year!

‹ 1 ... 23 24 25 26 27 28 29 30 31
WARNING: Javascript is currently disabled or is not available in your browser. GlobalGiving makes extensive use of Javascript and will not function properly with Javascript disabled. Please enable Javascript and refresh this page.