Will, Jada and Billy 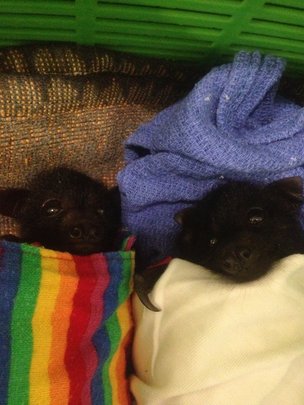 Will and Jada when they first arrived

Things are cooling down here now, and it's easy to forget the drama of the heat stress event late last year.

Attentive readers might remember that we helped look after some of the orphans from Casino, north of Sydney, because the local carers were over whelmed. The bats there are a different species, Pteropus alecto rather than the Pteropus poliocephalus we usually get in Sydney. This year, between the 2 species we put 100 baby bats through the facility- all of them using the lovely new cage. Of these, 62 were alectos, and 38 polios.

Most of us are much more familiar with the grey-headed flying foxes (poliocephalus) so this time I thought we'd tell the story of two alectos, Will and Jada. They were brought down by Tiere and Sarah, who did an emergency run to bring down some orphans to Sydney. You can see them wrapped up as bat burritos below. Very cute with much denser fur than our Sydney bats, they look like black velet.You can see the difference between them in the second photo, Billy is a grey headed one. But they all learn to hang on a laundry dryer, little by little until they develop their muscles. Eventually they start learning to fly too, and that's when they get moved into the new cage, so they can get a bit of space to develop their flying skills.

Usually we release from the cage to the local colony, but there isn't a colony of alectos near by so Jada and Will were taken back north and released at their home colony. Studies show that home raised bats have an excellent rate of survival when released, so we hope they are getting stronger and that soon they will be having pups of their own.

It's a lot of work raising orphan pups, and heat stress events are very traumatic. But when you are able to rescue and successfully release babies like Will and Jada you realise that it is all worth while. Some flying fox species (like our beloved poliocephalus) are ecologically vulnerable, and its so important that we are able to support them to survive.

Carers do part of the work its support like yours that makes it all possible.

Will, Jada and Billy, and the other 97 orphans we put through the facility in the last few months say thank you.
Now they are all in the wild, the cage is being used to help adult flying foxes, who have been brought in injured, mostly after being caught in garden netting. We will talk about them next time. 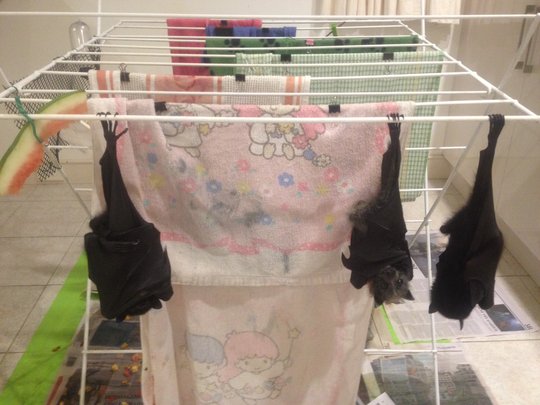 Will, Jada and Billy hanging out together 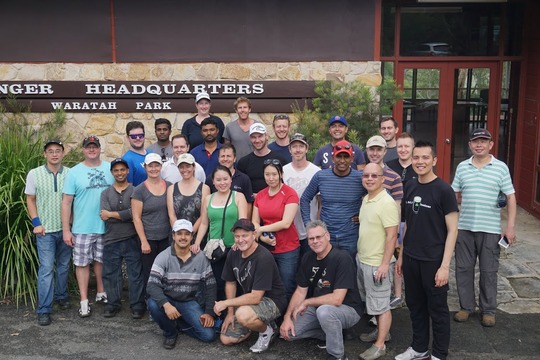 The word is now out about the great rehabilitation facility we have built with the help of your kind donations. We are now taking in more wallabies and kangaroos (macropods) from vets and members of the public from further afield as they have heard how successful our rehabilitation area has been.

We hope that you will continue to support Sydney Wildlife in our effort to povide great facilities for all of our native wildlife.

Tell us what you think of our expansion?

Since our last report, we have had 7 rescued macropods come through the facility. While looking after this many animals in the facility can be expensive with ongoing food and vet bills, it is a joy to know that because of your help and donations we have been able to give them the best of care and release them back to the wild in peak fitness, when healthy and/or old enough.

Here is a story on how two of these macropods came to be in our care:

Snives (Rescued from St Ives) - Adult Swamp Wallaby - was found stuck behind a shed in the backyard of a member of the public with grazes and bruises on its legs from trying to break free. After being picked up from the vets and being given treatment for her injuries, she has now fully recovered and is due for release.

Valentine (Rescued on Valentines Day) - Juvenile Eastern Grey Kangaroo - was seen daily over the course of a week visiting several backyards without a mother around. Sydney Wildlife and vets were called in to capture Valentine. As Valentine was wild and frightened, she was darted to sedate her and enable the Sydney Wildlife volunteer to capture her and transport her to our facility with minimal amount of stress or danger to herself. She has now put on weight but as she is still quite young and should still be with her mother, she will be in the facility for a while before we can safely release her back in to the wild. 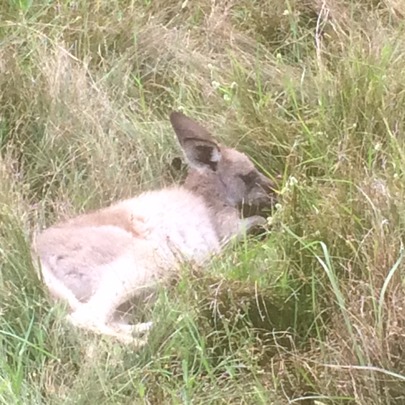 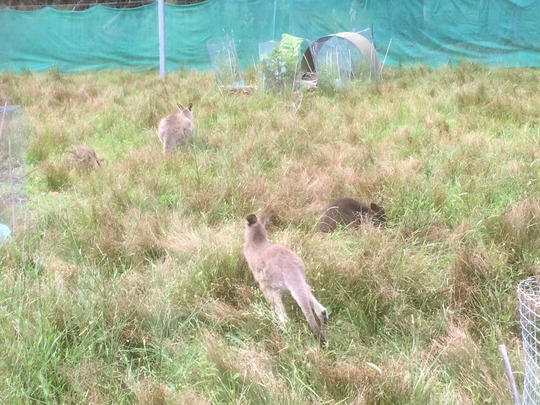 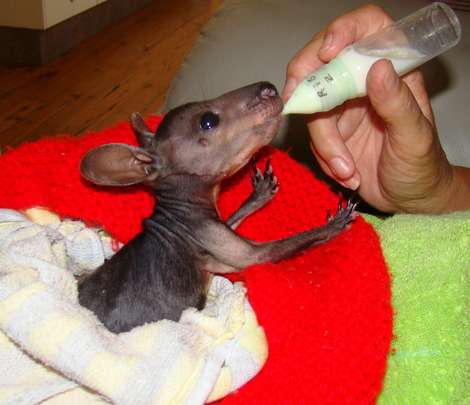 Cage finished and in use! 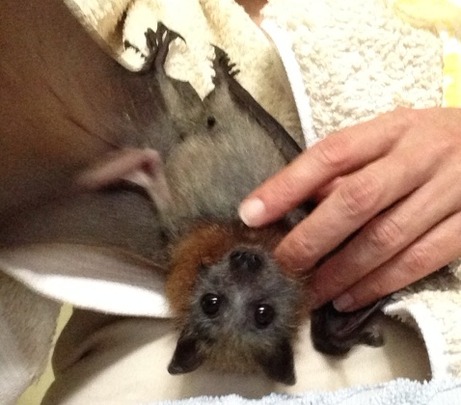 Great news! The new cage is now finished, certified and in use!

It's been a lot of work, and we still need to finish paying for it, but the great thing is that our baby bats now have a new creche to learn to fly and a bit of bat ettiquette before heading off out into the world. The new cage is lovely and has some very important features. It is double lined, to protect the babies from both predators and over curious primates, it has an "airlock" so we can enter and leave without risking bats flying out, and it's "dressed" with lots of things to hang  on, cloths to provide cover to be hide, lots of fresh folliage and of course dinner laid on each night.

As usual at this time of year, we've been doing a lot of cleaning, chopping and home delivery for our bats. The nightly chop is about 30kgs, which is a LOT.There's also a lot of cleaning. "What goes up", and all that... BTW did you know that bats (like most flying animals) have super fast metabolisms so they don't need to carry extra weight? The "food to floor" time is only about 20 minutes. They hang upside down/the right way up from their thumbs to poo? that way they don't get covered. But new carers feeding babies often do (the impulse to put the head on top is strong). All part of the learning process :-)

Anyway, fortunately we have quite a well organised schedule of people to clean, chop and hand out the buckets of fruit. The bats are as grateful and appreciative as teenagers, which is just as well, as they are being "dehumanised" in preparation for life in the wild. Hmmm..

This year we have 2 lots of youngsters: the local grey headed flying foxes and the black flying foxes that we took in from the north earlier in the season due to a heat stress event. The blacks will need to be released into their own colony, so they will have to be transfrered up north pretty soon.

In the next couple of reports we'll explain how the bats go from cage to the wild.

Thanks so much for being involved, and for all your support. 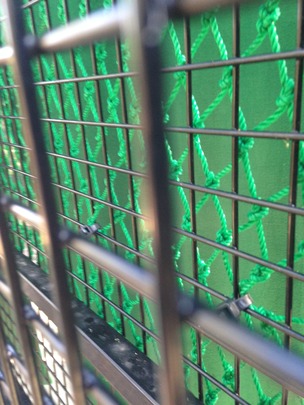 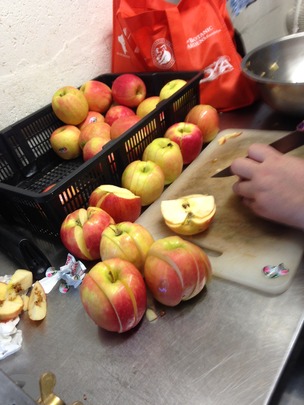 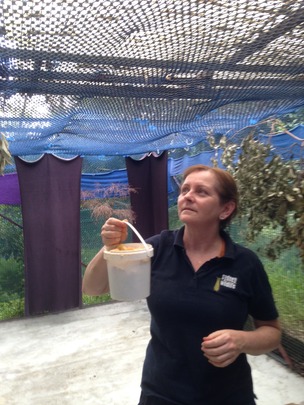 home delivery
‹ 1 ... 15 16 17 18 19 20 21 22 23 ›
WARNING: Javascript is currently disabled or is not available in your browser. GlobalGiving makes extensive use of Javascript and will not function properly with Javascript disabled. Please enable Javascript and refresh this page.