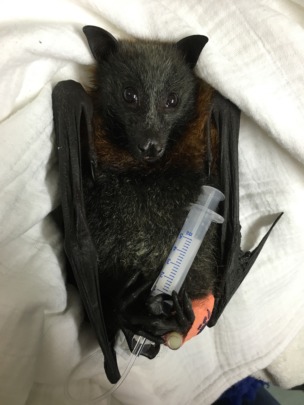 Jarrah was rescued from powerlines this week.

Winter is finally coming to Sydney- it's been unseasonably warm all April, and hasn't really felt like the end of season. But it is. The creche cage is finally empty- we had 89 pups this year, all grey headed flying foxes. Most of them were released into the local colony in Gordon, while 3 had to be taken North to Coff's Harbour. They were needed a bit more time to be release-ready. By the time they were, most of the main colony had moved on. Sometimes its easy to forget that naturally flying foxes are nomadic, and only stay long periods in one location because we have reduced their habitat so much.

This year wasn't the worst that we have endured, but certainly wasn't the best either. While there were no heat stress events in Sydney this season, there were some days that were close. We were able to put our heat stress training to use, and rather than intervene immediately, kept the "at risk"  colonies under surveillance. We worked in shifts, and cooperated closely with other wildlife rescue groups. We also equiped the branches with new sprayers, so that in case they were needed, we could cool the bats down efficiently. This is one of the ways that we aim to improve our care, even as climate change makes these events more common.

There was a bat heat stress event on the central coast this season, and a number of our carers went to help. They came back with car-loads of bats, that we cared for for the rest of the season. The unusual drama this year was that some of the bats in that colony turned out to test positive for ABLV. Fortunately none of the ones that came to Kukundi, but it was a timely reminder to remain careful and up to date with vaccinations. ABLV is very uncommon, but it can happen, and we need to be constantly aware.

Another threat this year came in the form of a hungry goanna. A 1.5 m goanna loitered for a while near the release case in Gordon. We reinforced the cage to make sure that he stayed hungry. He did. And finally moved off, no doubt rather annoyed.

Now the season has ended, the numbers of bats coming into care now is quite low. But there are still some, like Jarrah (pictured) who was rescued from powerlines this week.

There is always work to do, and we are lucky to have a great group of dedicated volunteers.

But equally vital our our supporters. This year I was stunned by the generosity of a couple of of donors, who have made repeated donations to help. I can't emphasise how much I appreciate your support. It is much more than just the money, its also knowing that there are other people out there who care, and share our entirely rational but maybe-sometimes-a-little-bit-bonkers obsession with bats.

We are very honoured and appreciative to have you on board supporting this vital but vulnerable keystone species. 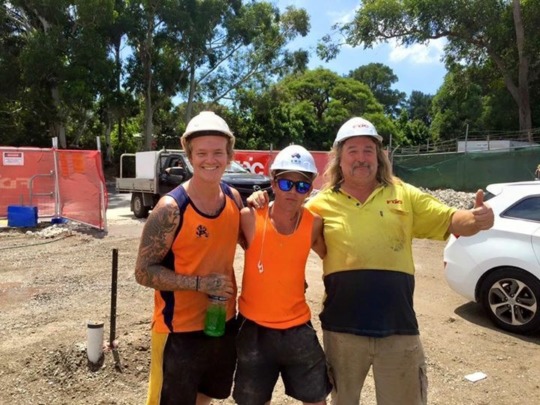 This is a story from one of Sydney Wildlife's Volunteers, Lynleigh, about one of her most recent rescues.

It started at a Scooter Workshop in Manly Vale on Sydney's Northern Beaches and ended on a construction site beside the Manly Swim Centre.

Sydney Wildlife got an Out of Hours call early in the morning with a report that a wallaby was stuck in some fencing on a busy road. She needed to be sedated and removed from the fencing. I loaded up my equipment and set off. Was it going to be that easy...? I'm sure you know the answer to that question...! Before I arrived on the scene she had managed to wriggle through the fence palings in a panic and was then on the loose on the main roads of Manly Vale Sydney.

Chasing a panicked wallaby through the streets whilst on foot is not easy. She boing-ed into the gardens of some units, then bolted off down a nearby street. It was only a matter of time before she hopped in front of a vehicle... Calls were flooding in to our office about a wallaby jumping haphazardly around the roads of Manly Vale.

I got in my car and tried to track her. A couple of hours had elapsed since the initial call-out so I was getting concerned about her stress levels - especially on such a hot day reaching 34C (93F). As I drove down the road I noticed a gathering of concerned-looking people outside a construction zone. A lovely Warringah Council Ranger was slowing the traffic. The poor wallaby had scrabbled underneath a massive skip bin where she was completely un-reachable. She was panting heavily and was hyper-salivating. The Rangers, the construction gang and I formulated a plan. I darted her with a tranquiliser, then when she was sleepy, the guys fashioned a scoop to push her towards our end of the skip. Wriggling under there for me was not an option, so we got one of the wiry construction guys to leopard crawl under there and grab her tail. Out she came.

After we secured her, the Rangers cooled her down by pouring bottles of water over her and then it was straight to the vet.

I rang ahead to Allambie Vet and they prepped the surgery for our arrival. As I pulled up, their doors flew open and the veterinary staff helped me in with my patient. They rushed her into surgery, recorded her vitals, put her on oxygen and a drip, cooled her down and administered pain relief. We discovered that she had a tiny pinkie joey in her pouch.

After an hour and a half of treatment by the extraordinary staff at Allambie Vet, she was released for transportation to Sydney Wildlife's Rehab Facility at Waratah Park. Our Facilities Manager rushed up there to receive the patient and we helped her to wake up calmly. She was soon relaxing after an immensely stressful day...!

Massive thanks to everyone involved.  A few weeks and several house calls later by the wonderful Terry Hills vets, she has now got the OK to be released along with her joey still in her pouch.

A great outcome for what started as a difficult and potentially dangerous rescue. 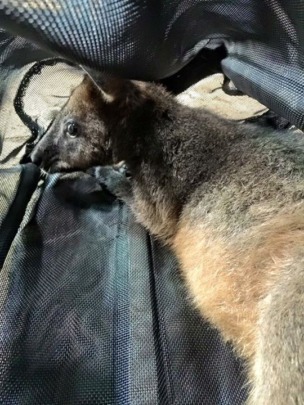 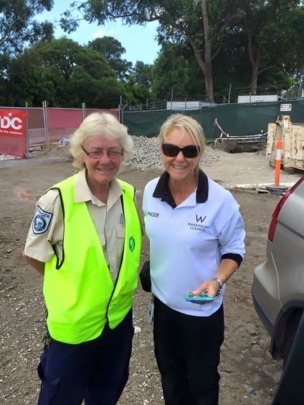 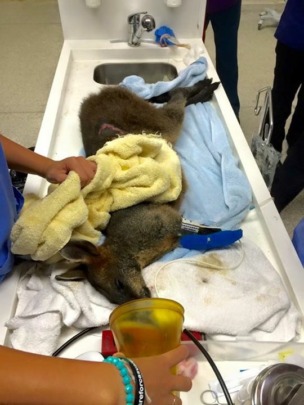 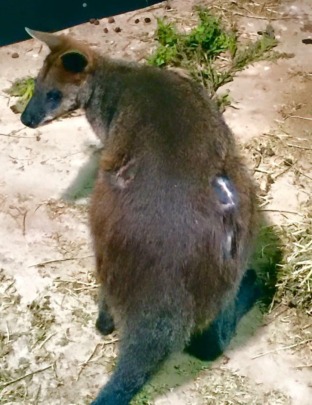 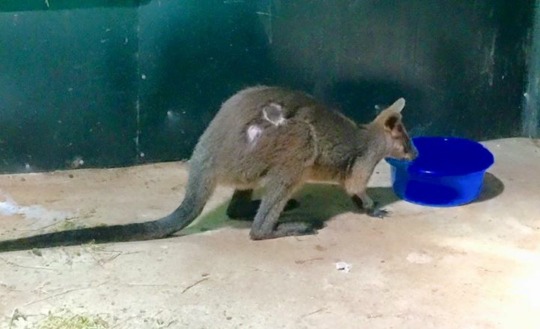 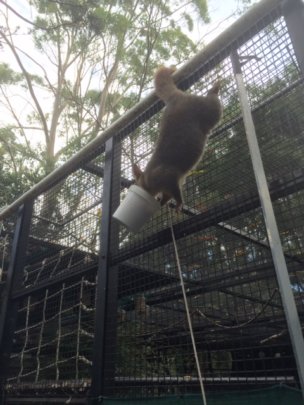 Something a bit different this report.

We are all busy chopping and hanging and cleaning for our small charges, and you might think this could get a bit dull. The average cut each day is about 35 kgs at the moment- spread between the orphans in creche, adults in the flight cage and the release site next to Gordon colony.

So this report I'm going to talk about what happens during the chop, and what makes it fun. First of all its social. Most people have groups of friends that chop together regularly. Its like a coffee club, but much more work and better for you. And the other part that's fun is that not all our friends are human. Take a look at the photos and see who comes to visit (ok, some of it is cupboard love, but hey, it works for me). Water dragons, brush turkeys (all sizes), kookaburras, possums, bats...beautiful location..lots of excerise lugging stuff around (cheaper than the gym). What's not to like? I mean apart from the hours of menial labour, cleaning up poo etc.

If you live in Sydney, and love bats, why not give it a go? 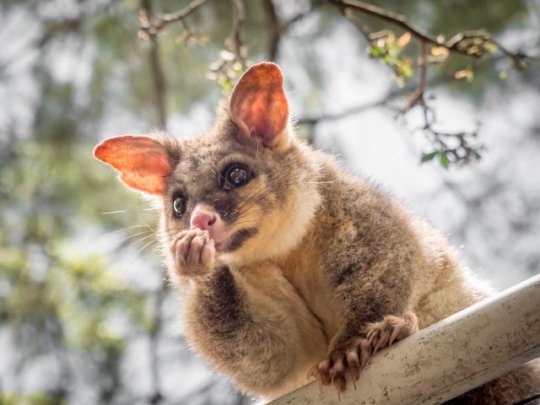 cheeky but also beautiful (thanks to Lynne Yeaman) 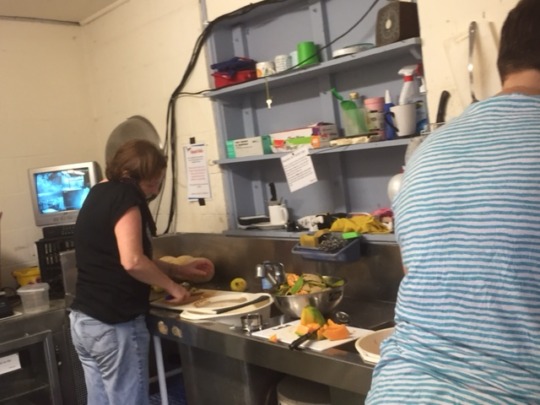 here we are chopping.. 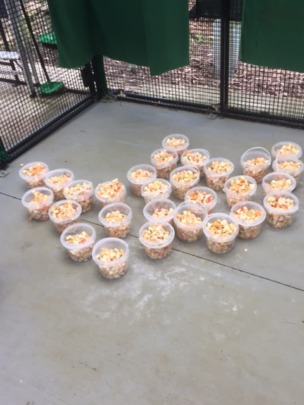 here is the food for the creche 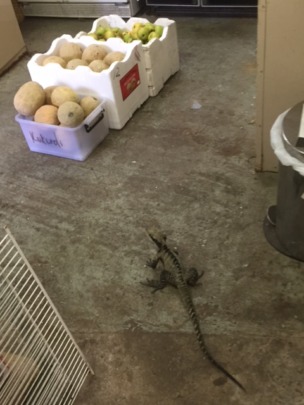 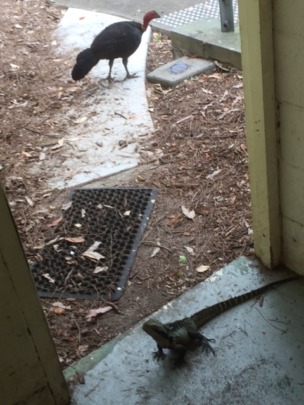 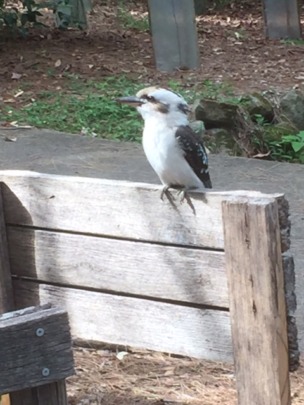 and kookaburras too
‹ 1 ... 12 13 14 15 16 17 18 19 ... 23 ›
WARNING: Javascript is currently disabled or is not available in your browser. GlobalGiving makes extensive use of Javascript and will not function properly with Javascript disabled. Please enable Javascript and refresh this page.