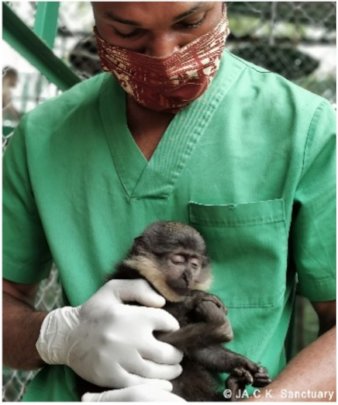 Thanks to donors like you, we have exciting news!

When PASA and J.A.C.K. (our member in Democratic Republic of Congo) orchestrated the biggest rescue in our 20-year history, we knew it wouldn’t be easy.

Smugglers had stolen 25 young monkeys from the forests of the Democratic Republic of the Congo, stuffed them into hidden compartments in a truck, and drove them for days across Zambia into Zimbabwe. They planned to sneak the monkeys into South Africa and sell them into the international wildlife trade.

As soon as PASA learned that the monkeys had been confiscated at a border checkpoint in Zimbabwe, we leapt into action.

Every day for months, we and our partners emailed, called, messaged, and met with government officials in Zimbabwe and D.R. Congo in efforts to bring the monkeys to a PASA-accredited sanctuary. A few days ago, a delegation from DRC including Franck Chantereau, the director of PASA member J.A.C.K., drove to the Zimbabwean border to personally transport the monkeys. We are thrilled to announce that the team safely delivered the monkeys to J.A.C.K. sanctuary!

It is because of supporters and advocates like you that this historical rescue is possible. Thank you!

This was an extremely complex rescue. It took signed and stamped Letters of Authorization from the Zimbabwe Wildlife Authority, multiple Mission Orders from the Congolese government, visas, veterinarians, COVID tests, travel crates and a whole bunch of oranges and watermelons to actualize this extraordinary rescue. The pandemic complicated efforts and drew out the timeline.

During their 39-hour trek from Chirundu, Zimbabwe to J.A.C.K, the monkeys stared out of the peepholes of their wooden crates. “It is as if they know they go back home,” said the rescue team.

The monkeys spent months confined in small cages at the Zimbabwe border without adequate care while we worked tirelessly to rescue them. As a result, they’re underweight and some need immediate medical treatment, which they are now receiving from the veterinarians at J.A.C.K sanctuary. However, the monkeys appear happy and playful, climbing and leaping in their new high-quality enclosures. The large, naturalistic outdoor habitats built especially for these monkeys include feeding stations, jungle gyms, platforms, and nests that can be moved up and down for cleaning.

The monkeys, which include endangered golden bellied mangabeys, still have a long road ahead of them. They need nutritious food, medical care, and rehabilitation after months of captivity. We’ll work with J.A.C.K. and other PASA members to return as many of the monkeys to the wild as possible.

We're sure you’re as relieved us that these innocent monkeys are now safe and receiving expert treatment and care. This success would not be possible without you. We can’t thank you enough for your continuing support through months of obstacles. 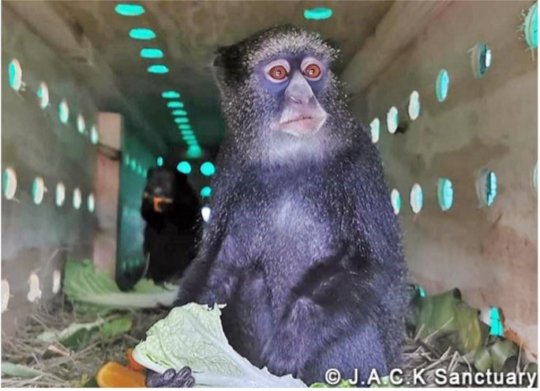 Transport to a PASA sanctuary for rehabilitation 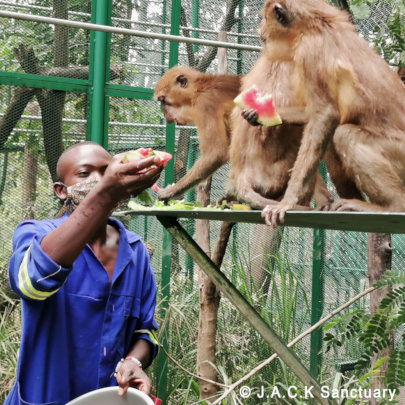 Finally, safety and care after months of waiting 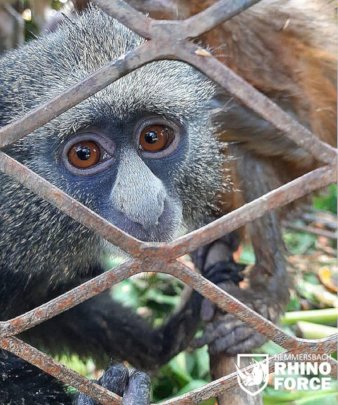 Over 20 monkeys were trapped in cages for months

You Gave Ujasiri a Safe Home 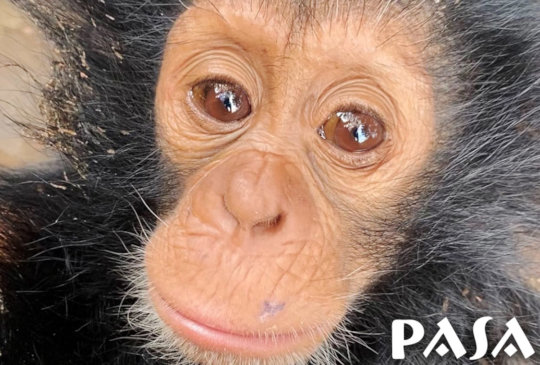 This year required courage from all of us. In October, infant chimpanzee Ujasiri was found by park rangers in the Democratic Republic of Congo. The helpless orphan was named Ujasiri because it means courage in Swahili.

Little Ujasiri was rushed to PASA member sanctuary Lwiro Primate Rehabilitation Center after being confiscated from the military in a conflict zone. He was dehydrated, underweight and infected with parasites.

Your support allowed dedicated sanctuary staff to save his life with urgent medical care. At first, Ujasiri would not play or groom, important natural behaviors for infant chimpanzees. The trauma he had experienced caused him to wake up panicked at night. But because of your help, he is making a full recovery. His appetite is stronger than ever (Ujasiri’s favorite snacks are peanuts, apples, grapes, and tuna!) and he has even been introduced to new chimpanzee friends. This would not have been possible without you!

Like Ujasiri, PASA member sanctuaries across Africa have had to summon courage to face this unexpected year: 2020 has been extremely tough. Your generosity has allowed the sanctuaries to survive this challenging time in history, allowing them to continue their extraordinary commitment to the animals in their care.

You kept Ujasiri safe and gave him a second chance at life. He and other rescued animals are receiving the care they need, even as the pandemic persists. Thank you for courageously standing by Ujasiri to help him and other orphaned apes and monkeys survive this year. 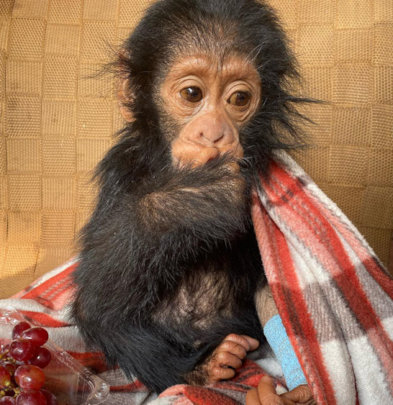 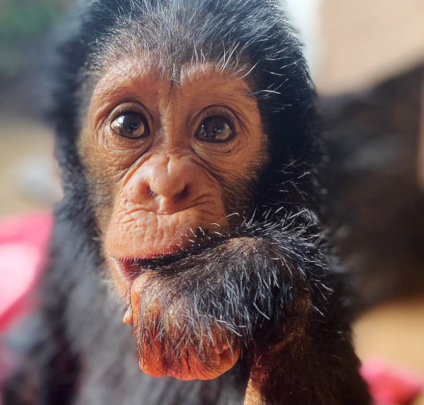 Fighting Against Increased Cruelty to Primates 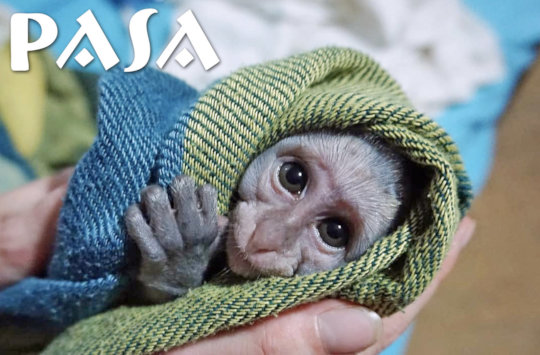 Every day that the coronavirus crisis continues, more apes and monkeys are being hunted and tortured at the hands of humans. PASA member sanctuary Colobus Conservation in Kenya told me that they are responding to about 15 animal cruelty cases each month. Your support has been essential to their primate rescue efforts during this difficult time in history. We can't thank you enough.

What’s the link between the pandemic and cruelty to primates? Here’s the truth:With the sudden loss of revenue from tourism, many people living near our member sanctuaries turn to illegal activities that harm wildlife, like hunting and the pet and bushmeat trades, to make a living. Farmers also resent primates for eating crops, especially when times are tough. They see the monkeys as pests. This can lead to inhumane treatment, like trapping and stoning.

As these cases are on the rise, you are helping our members continue their animal rescue programs. Colobus Conservation and other sanctuaries have been financially devastated by COVID-19, but your generosity has made it possible for them to address their top priority – providing food and medical treatment for the animals in their care – while still saving more animals in need.

These rescues include that of a lone baboon recently found slowly crawling outside a hotel in Kenya. An arrow pierced through his soft fur and ribs, missing his lungs by just an inch. Colobus Conservation rushed to save the baboon. Luckily, they performed lifesaving surgery and nursed him back to health. Today, he’s wild and free again!

Thank you for giving this baboon and other monkeys in need a second chance at life.  By helping our member sanctuaries survive this difficult time in history, you’re making sure that primates can be brought to safety and that our members can resume their community education programs – where they teach that baboons and other primates are intelligent creatures worth treating with respect – as soon as it is safe to do so.

Colobus Conservation and other PASA member sanctuaries depend on you to save every ape and monkey in need. Each day that the pandemic continues, more primates urgently need to be saved from horrific treatment… and no one knows how long this will last. I can’t tell you how grateful I am that you have joined us to protect these innocent animals from violence. 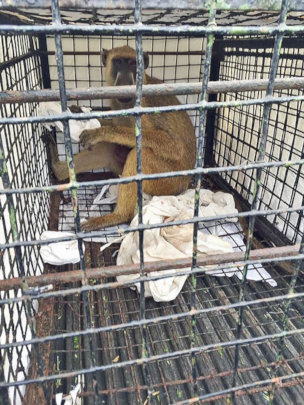 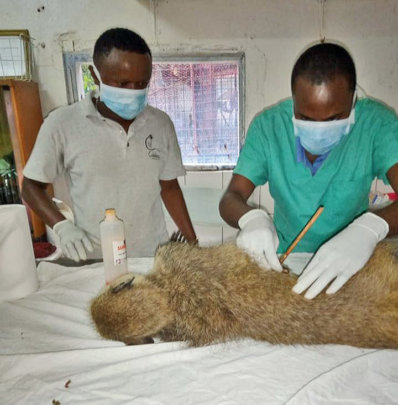