Looking Back on Precious Moments with the Talibes 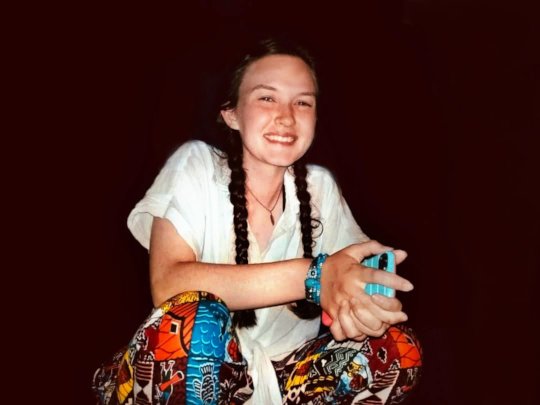 My life has more than considerably changed for the better thanks to my experience during the two months that I spent at Maison de la Gare as a volunteer. It will be impossible for me to forget all the lovely kids and adults I met at the center. My trip revolved around them and I will always be grateful that they made it as wonderful and lively as it was.

The talibé children in Saint Louis face a lot of hardships but, no matter what, they are brothers to one another. They laugh and play together. They also wrestle and fight like all kids. But there won't be a day when they won’t smile at you when you make a funny face. And working at Maison de la Gare meant leaning into that happiness and providing a space where the kids can be kids.

Through my experience, I was exposed to a totally new, totally different culture. As someone who has rarely had fewer than two jobs, spending two months in Africa has allowed me an immensely happy and calm season. In this brief moment, and for the first time, I wasn’t terribly worried about everything. I loved my job and I had friends who loved me; it was everything I could have ever asked for. Of course, the stay wasn’t comfortable like my life in the United States and there were things I could have done without, but I was so grateful to have the opportunity to be there in a strange place, surrounded by kind people and kids, without a thing clouding my mind.

As a student, I am determined not to waste the opportune environment I am in. I attend an excellent university full of extraordinary people, and such a position is scarcely attainable in most other places around the world. I have gained valuable experience working through a significant language barrier. I have gained cultural immersion in a foreign country and greatly expanded my ability to communicate and be courageous in new situations. With these new skills, I have new confidence and can expand my work prospects internationally with valuable experience already under my belt.

As a citizen, I am now capable of bringing a culturally educated voice to my life’s range of influences. I can raise awareness and contribute to refined views of certain types of social issues. Now, I can advocate for those that might not get a voice otherwise.

I will have to use incredible will to not let what I learned through my experience fade away. In the future, I will struggle to ward off my ingratitude, my self-destructive behavior and my temptation to place my own needs above those around me. Watching old habits return to my life terrifies me; I just hope the terror is enough to keep me from returning to my old lifestyle. In any case, in the future I will seize my opportunities to make known the reality I came to know in Senegal; the good and the bad, the personal and the public.

We invite you to read the full reports written by each of the former volunteers who are quoted below: Sam Kenney, Alessandra Battioni, Tommaso Arosio and Myah Freeman. 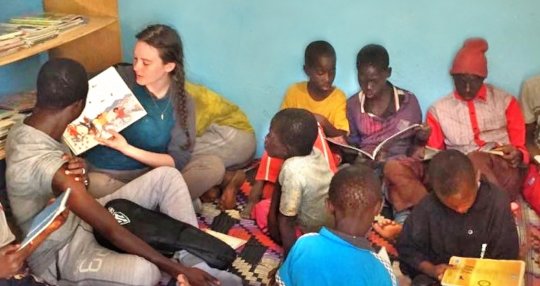 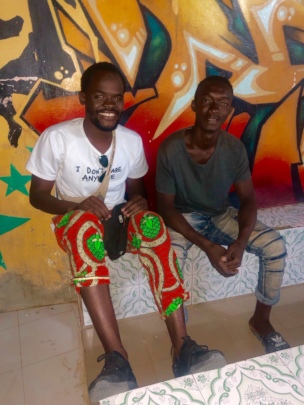 Sulayman has always been a quiet, positive boy with a gentle spirit and a smile. He began with the karate program early, not long after karate was first offered at Maison de la Gare. Sulayman earned his yellow belt at one of the first cérémonie de passage about three years ago. As he is originally from The Gambia, Sulayman speaks some English. Karate helped build up Sulayman's self confidence and discipline and he began to devote more effort to improving his English and learning math, allowing his thoughts to drift to a possible future, fuelled by education.

Sulayman remembers that when he was a young boy he lived happily with three brothers and two sisters and his mother and father in the Village of Welingarau in The Gambia, until the age of six.

Then, at the age of fourteen, Sulayman's mother wanted him to go to Saint Louis to be a talibé to better learn the Quran. So, he was sent by his Marabout to a daara in Saint Louis. Saint Louis has a reputation as a place to send one's sons to learn the Quran, among poorer villages, anyway. Perhaps many parents are unaware of the miserable conditions to which they are sending their children.

Sulayman noted that all of the younger children in his daara were forced to beg for daily quotas of money. A little bit older, he only needed to beg or work for his own food.  None of the children, including himself were fed or offered any type of health care when needed. No one was sent to school. Sulayman did not like what he saw of how the younger children were treated.  He was taught the Quran during the day, but there was no place for him to sleep at night at the daara.  Sulayman spent the first three months sleeping on the street, in doorways of homes, getting little sleep as he needed to quickly move away when anyone entered or left the house in whose doorway he was sheltering. He learned to ask for food from door to door to feed himself. Sulayman arrived from The Gambia with good clothes, but everything except what he was wearing was soon stolen in the daara.

Not too long after arriving in Saint Louis, Sulayman heard about Maison de la Gare and he made his way there. He saw the Maison de la Gare classes in session and he realized education could be the key for him. He spent as much time as he could at the centre, as life was much better there than on the streets or in the daara. He joined the karate program, working at it diligently until he earned his yellow belt.

After his first three months in the daara his marabout left for Casamance in the south of Senegal and Sulayman was able to sleep in the daara now, with more than 50 other boys.

Sulayman was permitted to return to The Gambia to visit his family twice in 2015. After two and a half years living in the daara in Saint Louis Sulayman had had enough. He left, and from that time on has existed in Saint Louis by couch surfing with friends. Sometimes he would sleep at Maison de la Gare's emergency shelter. He spent as much of his time as he could improving his English and learning math, in Maison de la Gare's classes and in classes offered by other associations. His goal was to learn enough that he would be able to someday integrate into school back in The Gambia. He supported himself working in the market helping to make cooking pots, operating the grinder to finish them. Sulayman earns enough money working to buy food.

Since this summer Sulayman has been seriously considering the idea of returning to The Gambia to go to school. The lack of resources to pay school registration fees and the fear of the unknown has held him back. This week things changed when a fellow Gambian, Tijan arrived in Saint Louis. Tijan had been a talibé who had wanted nothing more than to become educated. About three years ago, after frequenting a Maison de la Gare for several years, Tijan confided to an international volunteer that he had been considering attempting to find a way to migrate to Europe, as he heard that minors who arrived there would be enrolled in school. Maison de la Gare figured out how he could instead return to The Gambia where he had the right to go to school, but no practical means to do so. That was three years ago. This summer Tijan graduated from high school and is now preparing to begin university, to study business and economics in 2020. This week he had come to Saint Louis to visit at Maison de la Gare before starting university.

Sulayman, seeing Tijan's successful example, made up his mind that perhaps the seemingly impossible may be possible after all. The school he thinks he could go to is near his cousin's house. He is hoping to be able to stay with his cousin, and hopefully eat two meals a day there. And, Tijan lives just 20 minutes away in case he needs help.

The ongoing school fees will be a challenge. And, he is not sure his plan for living arrangements will be workable. But, he is full of hope and optimism. Sulayman is determined that his time is now. Before Tijan and Sulayman left for The Gambia, Issa, the President of Maison de la Gare, spoke with the two boys, offering advice. Sulayman also received much appreciated life advice and encouragement from Abdou, the head teacher at Maison de la Gare.

Tijan and Sulayman left Maison de la Gare together, excited about the future and we said goodbye.  Two days later they arrived "home" in The Gambia. Sulayman has had a meeting with the director of his school. He began high school this January, despite his age of 21 years.  And, he has found a math study group to join to help catch up for years of lost education and prepare him for what lies ahead. The future is looking bright. 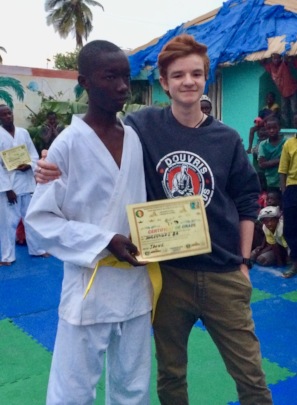 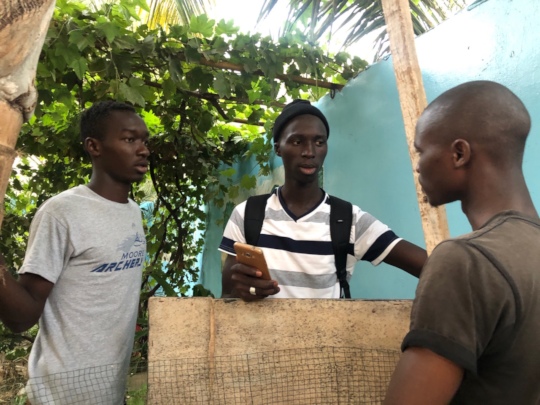 Sulayman discussing the future with Tijan 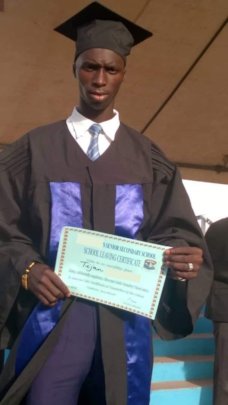 Tijan's graduation: the impossible is possible 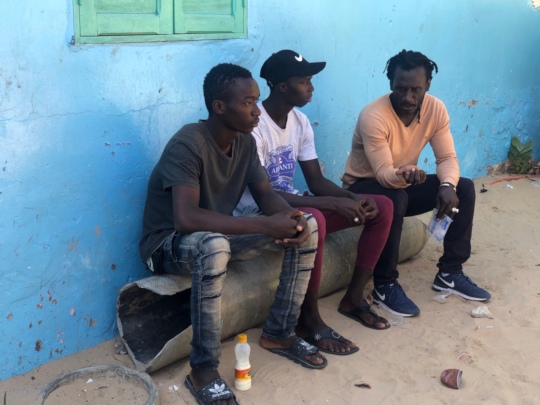 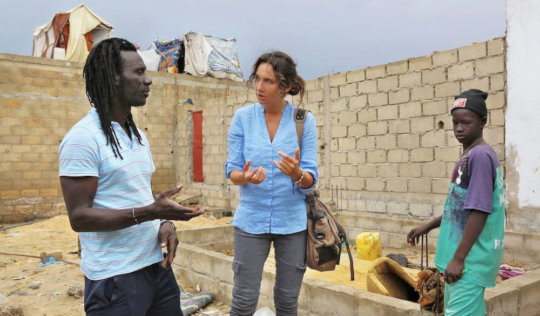 Forced begging is the most prevalent form of human trafficking in Senegal. Human Rights Watch estimates that every day more than 100,000 talibés – children living in religious schools to learn the Quran – are forced onto the streets under the threat of violence to beg for food or money.

Most live far away from home, sent by their parents to study the Quran, and live under the care of marabouts, teachers who run a daara or Quranic school. However, many of these children end up living without food, medical care or even a roof over their head, and receive little or no education.

The Kulczyk Foundation is supporting Maison de la Gare to reach more children, including through funding transport for the organization's night-time rounds looking for children sleeping in the street, so they can cover more of the city.

“The lives of most talibés in Senegal are shaped by violence, fear and despair and I was shocked to see the conditions many are living in. But when I visited Maison de la Gare during the filming of Begging for Change, I saw children filled with hope. With the Kulczyk Foundation’s support, Maison de la Gare will be able to reach more boys in the city of Saint Louis to offer these children safety and security,” said Dominika Kulczyk, Founder and President of the Kulczyk Foundation. “Collective action is now needed to change the mentality of the people who have allowed modern slavery to become an everyday norm in Senegal.”

“People say human trafficking happens in the shadows. In Senegal, it’s not like that. In Senegal it’s so obvious, so out in the open. It’s shocking … this is just exploitation. It's trafficking. It's slavery,” said Kouyate. 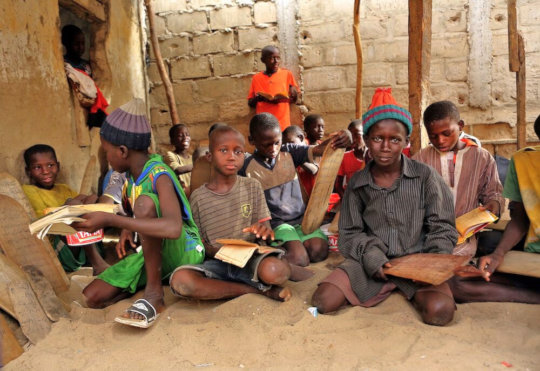 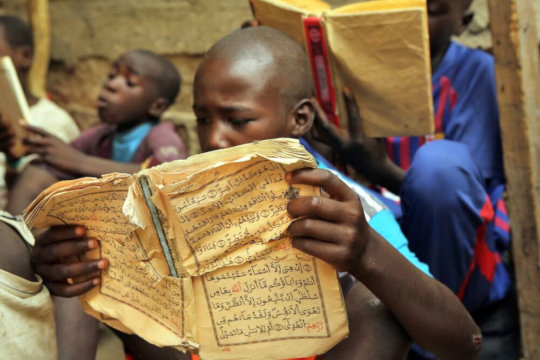 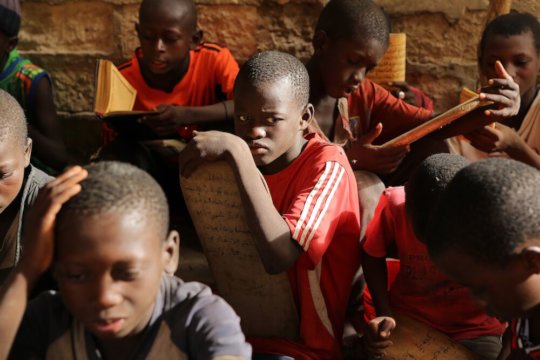 ‹ 1 ... 6 7 8 9 10 11 12 13 ... 53 ›
WARNING: Javascript is currently disabled or is not available in your browser. GlobalGiving makes extensive use of Javascript and will not function properly with Javascript disabled. Please enable Javascript and refresh this page.