During the months of December, January and February, the "Goal for Equality" project did:

"We can see the changes mainly in our community, with our friends. We can see that the girls are increasingly wanting their space, wanting to play. It is so. Thus, after this project we can see beyond, we can see that we can multiply this information that we have, and I think we can do it." Young monitor 7

-   Boys in favor of the empowerment of girls

“I feel like a multiplier at home. Because, as incredible as it may seem, I have a very macho mother in my house and we always debate and fight about it - about the relationship between man and woman. For her, in a relationship who will always be wrong is the woman. This kind of thing that happens in my house I have to debate and try to change my mother's opinion on these matters... there is still chauvinism” Young monitor 13

“After Goal for Equality, the day-to-day life with our children and young people improved a lot, because there was a lot of not wanting a girl on the team. As one woman's goal was worth two goals, the boys only included the girls because of that. Now they themselves notice when there are no girls on the team .... they say, "why do not girls want to play?", and they go after them. This is really cool, and it was changing after our project. Because it served to open the eyes not only ours (of the monitors), but also of all group (students)” Young monitor 10

“In the old days, there was only one monitor girl in the middle of 15 boys, within the training. Some time ago, the girls began to show up in the sport. Now there are a lot of girls looking to be monitors and we were not like that, in the past there were very few girls wanting to be sports monitors. We, monitors, are good multipliers because we bring the women here.” Young monitor 11

“I think the main change was the girls putting themselves on. The boys' jokes are no longer fun. The girls started to talk more, we showed them for example that Marta won more gold balls than Messi. They had no idea what the female players' lives were like, their stories. So I think the main change was for them to empower themselves more. Often they do not practice for lack of stimulation, they realized that they can contribute as well, because the question of chauvinism still has to be worked hard with them.” Educator 4

“I and my friends were playing in a court here in the neighborhood. One boy said that we were not going to play because we were girls - "What are you doing here on the court? Girls do not play football." And I said, "Who told you that? I do not think the same way you do." Got it? I tried to show him that it's not the way he thinks... I will not stop playing because the boy told me that I cannot play because I'm a girl.” Young monitor 3

“The cool thing about the Goal for Equality Project was that we also included the children... we not only had soccer, but we also had dance, capoeira and various activities. He even had a girl with a baby, with a cloth wrapped around her body, like a kangaroo, and the baby was there with her while she was doing graphite. So she did not have to leave her son to go. It was like this, the community was participating, there were many people who took the family so it was not only the women, but the whole community and the whole families.” Young monitor 10 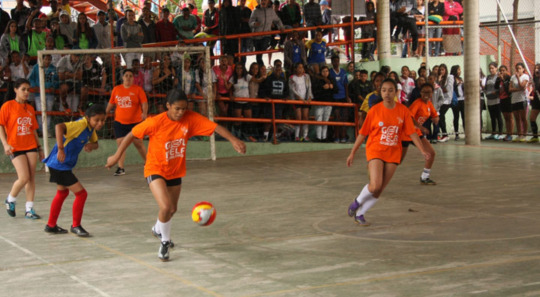 During the months of September, October and November, the "Goal for Equality" project carried out actions involving students, educators and young people in order to promote gender equality and the empowerment of girls, such as:

As a highlight, we mention the Goal for Equality Tournament, which took place in September. The event was intended to be an affirmative action for the empowerment of girls and women.

The flagship of the tournament was the women's futsal matches, with 150 girls and women playing in a total of 22 teams present. During the day there were parallel activities animating the audience during the games: female collaborative production of graffiti, gender cinema with projection of videos on the theme of gender equality, open dance class, capoeira and music. At the opening of the event the young monitors of Gol de Letra performed a small theatre play and the social agents made a presentation, both showing daily situations of respect and diversity. The event had a great audience, there were 468 people between participants and spectators.

The main challenge in the period was the articulation of the community to ensure participation in the Goal for Equality Tournament. The young leaders played a key role in mobilizing the female teams that participated in the games. All 16 monitors had the task to identify female soccer teams to attend the tournament. In addition to identifying, they had to encourage their participation in the event. There were 22 teams that participated in the tournament, of which 12 were mobilized by the monitors and made the registration a day before the event. In the end, as previously described, the challenge was overcome and the tournament was a success!

Another point worth mentioning in this period is the formation process of the educators in the gender equality theme. We noted that this process has broadened the knowledge of the group on the subject and empowered the educators to put it into practice. We identified that the group of educators show better intent in proposing activities on the theme of "gender equality" to the students. 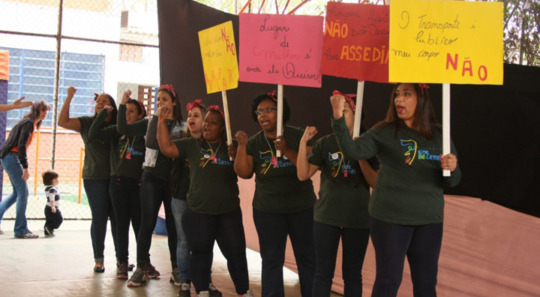 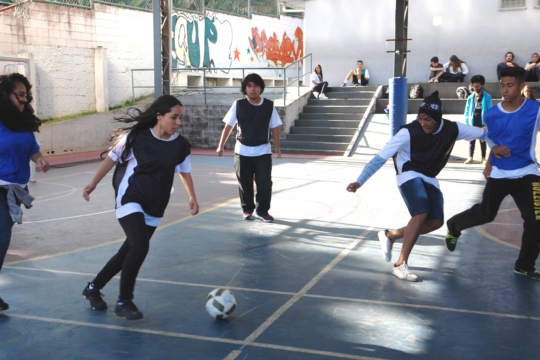 During the months of May, June, July and August the actions of the "Goal for Equality" project were taking form and drummed up interest of young people and the community. Currently girls represent 30% of participants and the dialogue about gender equality has been permeating all activities, which we consider a great conquest.

Other points worth mentioning:

- Increasing the number of people served. In the beginning, we predicted to attend 150 teenagers for futsal activities and nowadays we attend 202.

- Moreover of football activities, several others activities were offered to young people in that period: fencing and Frisbee workshops; sidewalks for sports centers; research about Olympics games and cultural features of different participating countries.

- The open events for community (walking, leisure street and Leisure activities on Saturdays) we guarantee the activities which waken interest in the female public, encouraging and increasing its share.

- Girls realise and understand better their rights and their capacity for social changing, besides being possible to look on people from the community more informed about the women’s rights and gender equality.

Although the period is full of conquest, challenges exist. The resistance to dialogue about gender equality, especially from boys, is still common. Some boys still avoid talking about this theme. They come from parent’s background based on a super-masculinity culture even family and community. As a consequence, the challenge today is inserted to us is the sensitization of this group for discussion about the girls equal participation in all of subjects and activities. We know it takes time to get attitudes changing, especially when those are sustained in cultural issues, but we won’t conserve efforts to strike this goal. 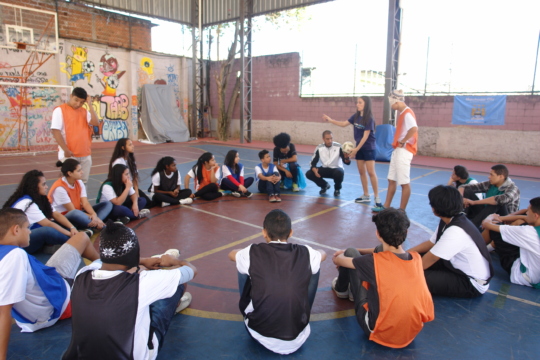