Opening of Shelter Delayed to Due Coronavirus 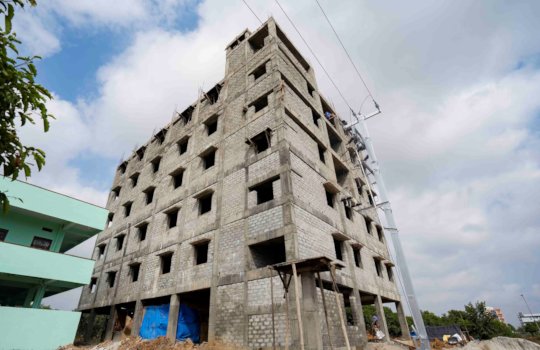 With the shutdown of India on 3/24, all construction on the 150-bed shelter came to a halt. It's disappointing, especially since it is so very close to being done! Rest assured, as soon as the lockdown is completely lifted, our workers will be back at work!

The good news is that we still have three other shelters that are providing more than 60 young girls and women a new chance for life! Some girls are as young as 4 years old when they come to us. These are girls whose families were going to dedicate their daugthers to a life of ritualized sex slavery. Older teenage girls are ones who have been rescued and redeemd from that horrific life.

When you give to this project, you provide on-going shelter, care, healthcare, AND education to girls whose lives have been stolen from them. You are restoring hope, giving freedom, redeeming their future.

When India went into lockdown on March 28, 2020, access to food and water for vulnerable families became even more difficult. People were not allowed to venture beyond 3KM from their home without a pass. Migrant workers, mostly men, were forced out of their homes in large cities and forced to travel by foot for days without food and water.

The good news is that women who had water wheels were still able to get clean water! They were able to use the water to make rice, dahl (beans), and breads. They could keep their hands clean and insist on good handwashing for their children.

They could also keep their businesses going. Many own at least one water buffalo and sell milk to earn income. Some have a small vegetable garden to feed their families and to sell to their neighbors.

We're so thankful for those who continue to give these life-empowering tools to vulnerable women. Quite literally, these wheels are keeping them and their families in good health during the time of COVID-19.

When You Give A Girl Wings

Located in a small remote village in southern India, Manjula’s childhood home housed a family of eight. As a little one, she was unaware of the daily burden to put food in the bellies of six children. She didn't understand the constant struggle to find shoes to fit growing feet. A one-room hut surrounded by her family was all she needed to sleep peacefully and dream about flying high enough to touch the stars at night and the clouds by day.

But as she grew, the painful reality of her circumstances began to surface. Her brothers were forced to drop out of school to provide food for the family. Her teenage sister was forced to marry very young, something families did to reduce the cost of the dowry, for one less mouth to feed, and for two less feet to fit. Manjula’s home became a place of instability and fear with questions like "Will we eat tomorrow? Will I be the next to marry?"

And then, at just 14, her home shattered and her flight path nose-dived. With the family facing a severe financial crisis, her relatives gathered to decide Manjula's fate. Just like her grandmother and aunt before her, she would be dedicated to the goddess as a jogini, an ancient practice of ritualized prostitution that still exists today even though it is illegal. By dedicating her, Manjula’s family believed they would be blessed by the gods and avoid paying a dowry for her future marriage. Sometimes, Joginis also receive small fees so Manjula would be contributing to the family income. As a Jogini, Manjula would become the property of her village to be used by any man, anywhere, any time for the rest of her life. Her wings were about to be clipped forever.

AND THEN YOU RESCUED MANJULA

You support the Jogini Freedom Fighter in Manjula's village who got wind of the impending dedication. With her mother’s permission, Manjula moved several hours away to our shelter where she no longer worried about her next meal or new shoes. She no longer feared being awakened in the middle of the night by her neighbor's husband or the drunk farmer down the road. She slept fitfully at first, but over time, peacefully as counselors and mentors gently worked the demons from her fears and prayed love into her soul.

Through the daily rhythms of morning chores, school, evening meals, and bedtime prayers, Manjula’s wings began to mend. School was hard for her at first. Yet as her heart healed, so did her mind. She eventually graduated from high school, earned her junior college degree and completed her teacher’s training.

YOU GAVE HER WINGS TO FLY

Manjula now lives in her very own home and teaches at one of our schools in northern India. She doesn't worry about food or clothing. She cherishes every moment in her own space: no bad dreams, no selfish men, just safety and security, hope and peace.

Because of you, Manjula has found her voice to empower other young women, to give them wings to fly.  She wants a better life for people like her. And most of all, she wants the Jogini system ended forever.

WHEN YOU GIVE A GIRL WINGS TO FLY, SHE SOARS!