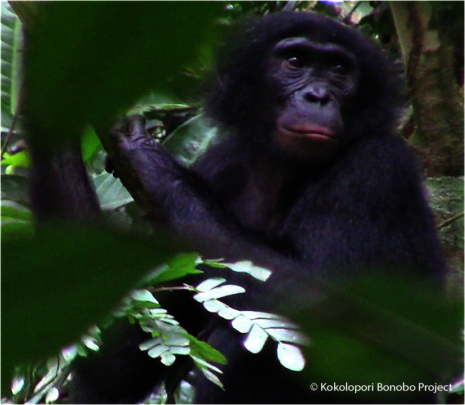 The BCI team has just returned from an exciting visit to the Kokolopori Bonobo Reserve! BCI president, Sally Jewell Coxe, and our field team were accompanied by some special guests—including activist and actress Ashley Judd, filmmaker and co-founder of Nature Needs Half James Brundige, and renowned wildlife photographer Frans Lanting. Before the expedition, BCI and Ashley partnered on a petition to raise global awareness about the importance of protecting bonobos and their rainforest habitat. She is so enthusiastic about our work that she wanted to see it first-hand! Upon her return to the States, Ashley said of her trip to the Congo: “It changed my life.”

During the expedition, the BCI team visited with our community conservation partners within Kokolopori and environs, and we initiated some promising new projects.We met with the Kokolopori Bonobo Reserve Association and other local groups, as well as partners from neighboring sites, to assess progress and confer on future plans. We kicked off an environmental education program that will benefit all schools in the reserve, and beyond—and we laid the groundwork for a far-reaching awareness campaign. A soap-making project was also initiated under the leadership of a local women’s cooperative. Of course, the major focus of the expedition was visiting the bonobo groups being monitored by our dedicated tracking teams. We joined the team from the Max Planck Institute (MPI) and visited the Ekalakala and Nkokoalongo bonobo groups and learned a little bit more about their neighbors, the Bekako group.

The very first day, Ekalakala and Nkokoalongo groups met in the forest, which was super exciting! Stay tuned for more images and footage of the expedition, to be released in the coming months.

We’re happy to report that all members of the Bekako group have been identified and named, thanks to the help of the MPI researchers. While Ekalakala bonobos are named after colors and Nkokoalongo after musicians, the Bekako bonobos are named after rivers. We are in the process of habituating the Bekako group and understanding its ranging patterns, to prepare for future research and ecotourism. We have learned that from time to time, this group interacts with the two groups currently being studied by MPI. In fact, the Bekako bonobos had an encounter with the Nkokoalongo bonobos during our expedition! The team has been working diligently to gain a better understanding of the composition of the Bekako group, nearly half of which are juveniles and infants, which bodes well for the bonobo population of Kokolopori.

Generous support from donors like you has helped to sustain our monitoring teams and conservation programs at Kokolopori. Want to make an even greater difference? This Wednesday is GlobalGiving’s GG Rewards Bonus Day. Starting at 9:00AM EDT (July 18th), GlobalGiving will make available $120,000 in matching funds. Donations will be matched while funds remain, with recurring donations matched 100%!

As always, thank you for standing with us…and please help BCI and our partners by spreading the word about our work! 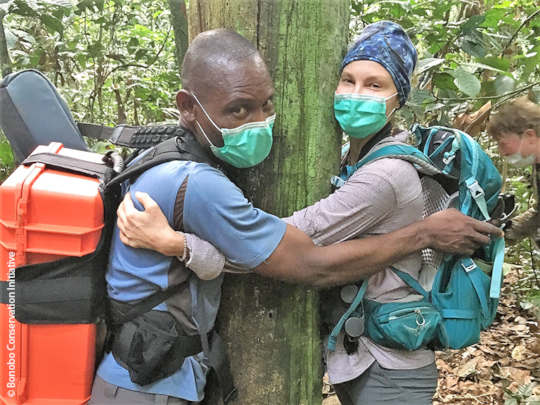 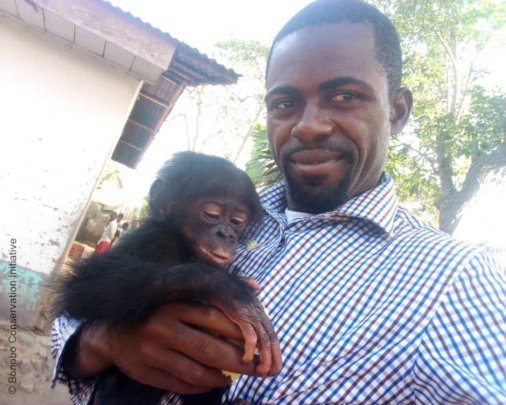 We are pleased to report that we have successfully rescued another orphan bonobo! Orphans are an all-too-common side effect of the bushmeat trade, and few survive without their mothers. Thanks to the combined efforts of BCI staff and partners, this little bonobo will get a second chance at life.

In early March, BCI community partner Héritier Mpo was on assignment in the Sankuru Nature Reserve. While in the village of Hiekele, the chief informed Héritier about the orphan, a female approximately two years old. A hunter had killed the bonobo’s mother for meat, and then two days later sold the baby bonobo as a pet to a soldier from Lodja. Working with provincial and military authorities, Héritier and BCI staff devised a plan to retrieve the bonobo.

Many people within the Congo and beyond are still unaware that it is illegal to keep bonobos as pets. Humans are ill-equipped to provide for the physical, social, or emotional needs of bonobos, and pet bonobos usually do not live long. After informing the soldier about the law, Héritier successfully negotiated for the bonobo’s release. He obtained the necessary paperwork—no small feat given that Sankuru is a new province and still establishing its government services—and prepared the bonobo for transport to the Lola ya Bonobo sanctuary in Kinshasa. She is now doing well and awaiting her official name.

This orphan is one of the lucky ones. We are grateful for her rescue, and all the other orphan bonobos we have helped to safety. Still, the vast majority of orphans do not have a happy ending. Rescuing a bonobo can be difficult and dangerous. It requires awareness on the part of the community, political and legal support, and perseverance and bravery on the part of our field staff. As we celebrate this rescue, we recognize the contributions of the people who put their lives on the line every day to protect the bonobos. We also gratefully acknowledge you—your support makes it possible to train and equip our field teams, provide economic alternatives to poaching, and spread awareness about the importance of conservation.

As always, thank you for standing with us! 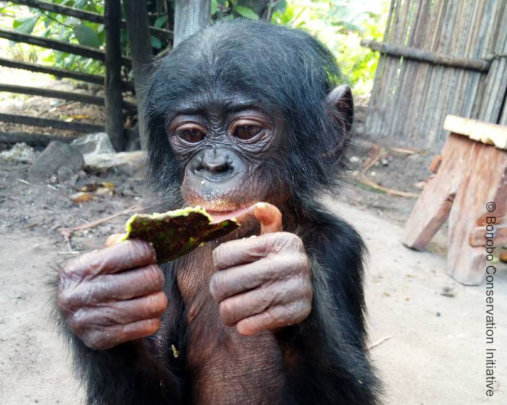 Enjoying a snack before her trip to the sanctuary
Jan 16, 2018 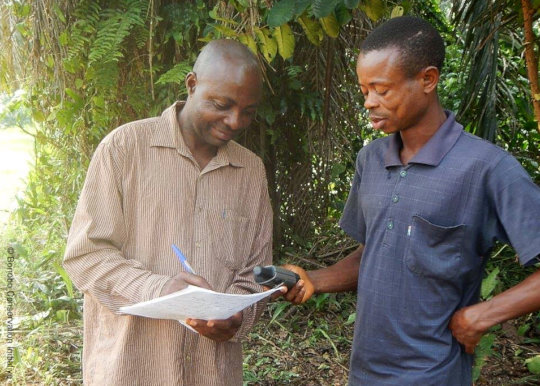 2018 marks an important year for us at the Bonobo Conservation initiative. Not only will we be celebrating 20 years of protecting bonobos and empowering their human neighbors in the Democratic Republic of the Congo, but we will also mark 10 years of partnership with GlobalGiving in October! We are grateful for the family of collaborators that we have built over the years. And we are grateful that this family continues to grow!

While he has been a part of our team for several years, Albert Alukana recently embarked on a new mission of his own to expand bonobo protection near his home village. Albert was employed as a nurse at the Kokolopori health clinic, where he was inspired by the Bonobo Peace Forest concept. He saw that there was a way to simultaneously preserve rainforest and wildlife while securing better economic opportunities for his local community.

Albert left Kokolopori and traveled back to his village in the Bosoku sector of the neighboring Tshopo province, where he spearheaded the effort to form a conservation association focused on bonobo protection. He began by gaining the support of his community, and extended his efforts to nearby villages. He then pursued and received authorization from the local government to establish a conservation program in the area. After getting trained in GPS mapping techniques, Albert recently completed delimitation of what is now known as Foret Riche. During this process, he confirmed the presence of both bonobos AND forest elephants! We’re excited to work together on the next phase of mapping this high biodiversity area, and to develop a conservation program with our new community partners!

We are so proud of Albert and our other partners in the Congo. The progress that we have made so far in protecting bonobos is testament that our approach is working and continues to work. Your support has made this all possible. As we look forward to a new year and a new decade of progress, we also look forward to taking Albert’s project--and those of our other Peace Forest partners-- to the next level. Working together, we are creating a brighter future for bonobos and all who share their rainforest home.

As always, thank you for standing with us…and please help BCI and our partners by spreading the word about our work!