"Speak Volume With Your Action" Campaign

by Education as a Vaccine 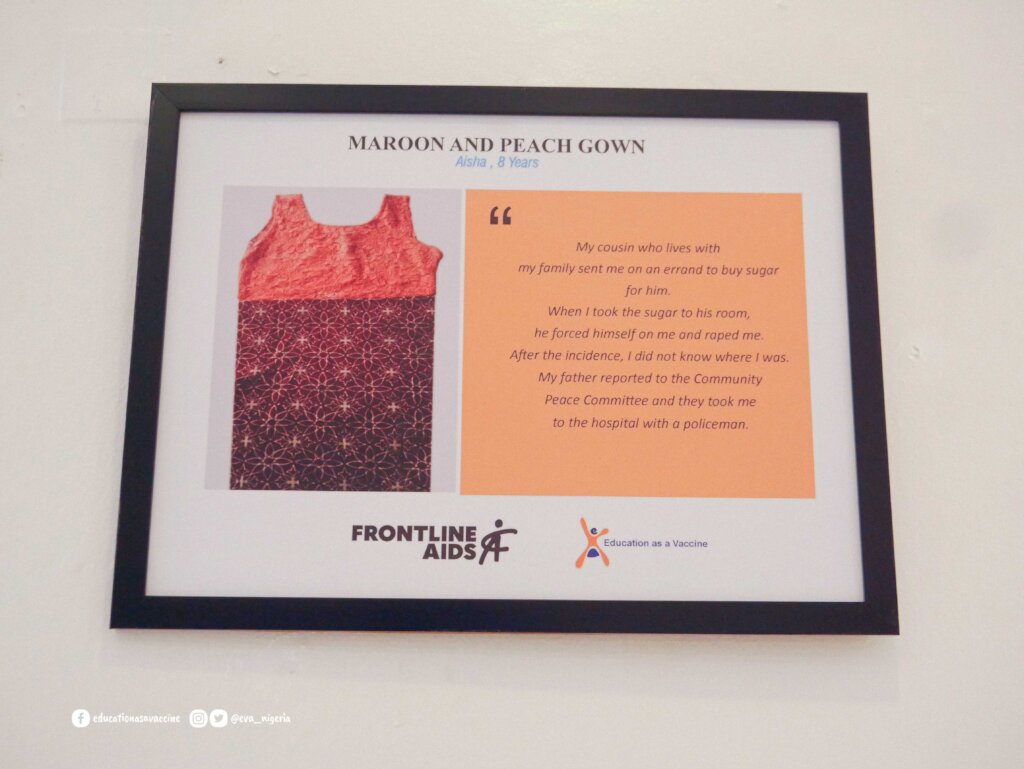 This report provides an overview of EVA's "Speak Volume With Your Actions" campaign. The campaign contributed to ending violence against women and girls by using storytelling and imagery to shift negative norms, break the culture of silence and push for the implementation of the VAPP Act in Abuja's Federal Capital Territory.

We worked with selected young women whose capacity we built around gender equality and women empowerment, sexual and gender-based violence. We utilized EVA's advocacy training guide and trained them on developing a strategy and work plan, planning an exhibition, advocacy campaigns, and using radio and community dialogues to sensitize their communities. We then supported the young women advocates in collecting stories of female survivors of rape and pictures/descriptions of what they wore during the incident.

Furthermore, the advocates launched the What She Wore Campaign using Instagram as the main platform while sharing on other platforms such as Whatsapp, Facebook and Twitter. They shared advocacy messages around the provisions of the law and the responsibilities of the duty bearers and citizens in implementing the Act. They also used radio to increase their reach and hosted community level exhibitions and dialogues.

We reached Four hundred and seventy-two (472) people with increased knowledge and awareness of the VAPP Act through the campaign. In addition, we reached about 5 million people through two live radio broadcasts and 1.7 million people through social media interactions. Furthermore, Four (4) decision-makers made commitments to implementing the VAPP ACT and doing more for the SGBV response in the states. More importantly, we built the capacities of eight (8) young women to advocate for women's and girls' rights to end the VAWG in the states and enhance their leadership skills.

Highlights of the training were testimonies from the female advocates who shared their excitement about increased knowledge.

Mayowa noted that in addition to changing her mindset that people get raped because of what they wear, her communication skill also improved.

"I have learned to speak up, not just for myself but for others. Advocacy is fun if done right. I will be looking forward to more opportunities like this; it has given me more courage'' - Aishat noted.

"I was not aware of all the various forms of abuse or the norms in society that promoted rape culture and victim-blaming. I didn't know that a VAPP act existed. I gained great knowledge on this topic. In the future, if I or someone I know or someone around me encounters or is going through any form of abuse, I know how to handle such a case better."Doose said.

The exhibition was generally well-received as a critical contribution to the prevention of SGBV compliance in Nigeria and has piqued a great deal of interest from several other stakeholders. We have received requests from the UNFPA Country Representative and the Australian embassy, who would like to display the stories at various events. This is a testament that the stories have been/are an excellent tool for deep reflection and garnering action to end SGBV.

While the ‘Speak Volume With Your Actions’ campaign was exceptionally illuminating, there is space for significantly more.

Our work with rape and sexual assault victims showed the need to link some of them to support services, especially care groups, psychosocial counselling, and legal advice/services, as it was not enough to simply document and collect the stories.

Also, there is a need to focus on community-level awareness about how and where to report and the systems deployed to address SGBV. This is mainly for the gatekeepers who believe that their traditions and culture have conferred on them the ability to handle cases of SGBV.

Education as a Vaccine

Donating through GlobalGiving is safe, secure, and easy with many payment options to choose from. View other ways to donate
Education as a Vaccine has earned this recognition on GlobalGiving:

GlobalGiving
Guarantee
Donate https://www.globalgiving.org/dy/cart/view/gg.html?cmd=addItem&projid=54682&rf=microdata&frequency=ONCE&amount=25
Please Note
WARNING: Javascript is currently disabled or is not available in your browser. GlobalGiving makes extensive use of Javascript and will not function properly with Javascript disabled. Please enable Javascript and refresh this page.