Donations to this project are eligible for a 300% match as part of the HOPE FOR CORALS campaign! (while funds remain)
Climate Action  Fiji Project #57059 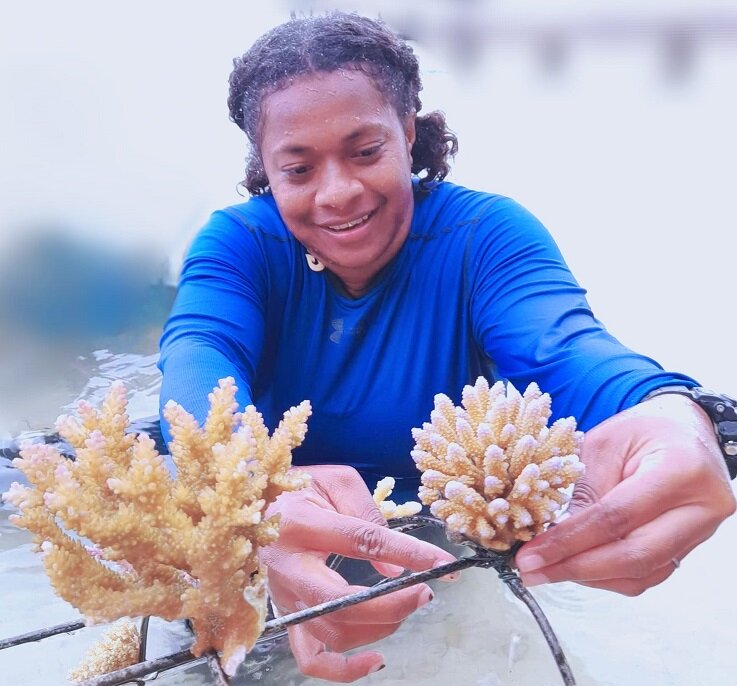 Coral reefs are predicted to die out within 30-50 years from intense marine heat waves. Reefs of Hope is a revolutionary intervention to rescue heat resistant "super corals", found at the upper limit of possible survival, and in danger of dying out in the face of Global Warming. Samples of these heat adapted corals are moved to the safety of cooler outer reef areas, creating heat resistant breeding populations of corals, which in turn accelerate natural coral adaptation and recovery processes.

The oceans worldwide are warming at an alarming rate. Sea levels are rising disrupting indigenous peoples villages. Corals have been stressed, which causes them to lose their internal algae and bleach. With severe bleaching most corals die. Even bleaching resistant "super corals", which can tolerate much higher temperatures, will die if the water temperatures rise beyond a critical level, or if hot water lasts for months.

Action must happen now, and simple methods that are community appropriate are being used. Heat resistant super corals with the ability to naturally endure higher temperatures and resilient to the threats Global Warming poses to coral reefs, are sampled and moved to the safety of cooler reef areas where they are grown. Temperatures are predicted to remain under the bleaching threshold of the super corals for decades. These corals represent the same species of corals that are dying from bleaching,

Saving heat-resistant coral genotypes and transplanting to safer, cooler waters can buy time for these marine species. Many fish return to bleaching degraded reef "deserts", given new habitat from the hardy corals. Breeding coral populations are restored and so adjacent and down-current areas are impacted positively. An amazing cycle is established of life returning and becoming bountiful again within 5 to 10 years. Community no-take areas are being established in tandem with the coral work

GlobalGiving
Guarantee
Donate https://www.globalgiving.org/dy/cart/view/gg.html?cmd=addItem&projid=57059&rf=microdata&frequency=ONCE&amount=25
Please Note
WARNING: Javascript is currently disabled or is not available in your browser. GlobalGiving makes extensive use of Javascript and will not function properly with Javascript disabled. Please enable Javascript and refresh this page.