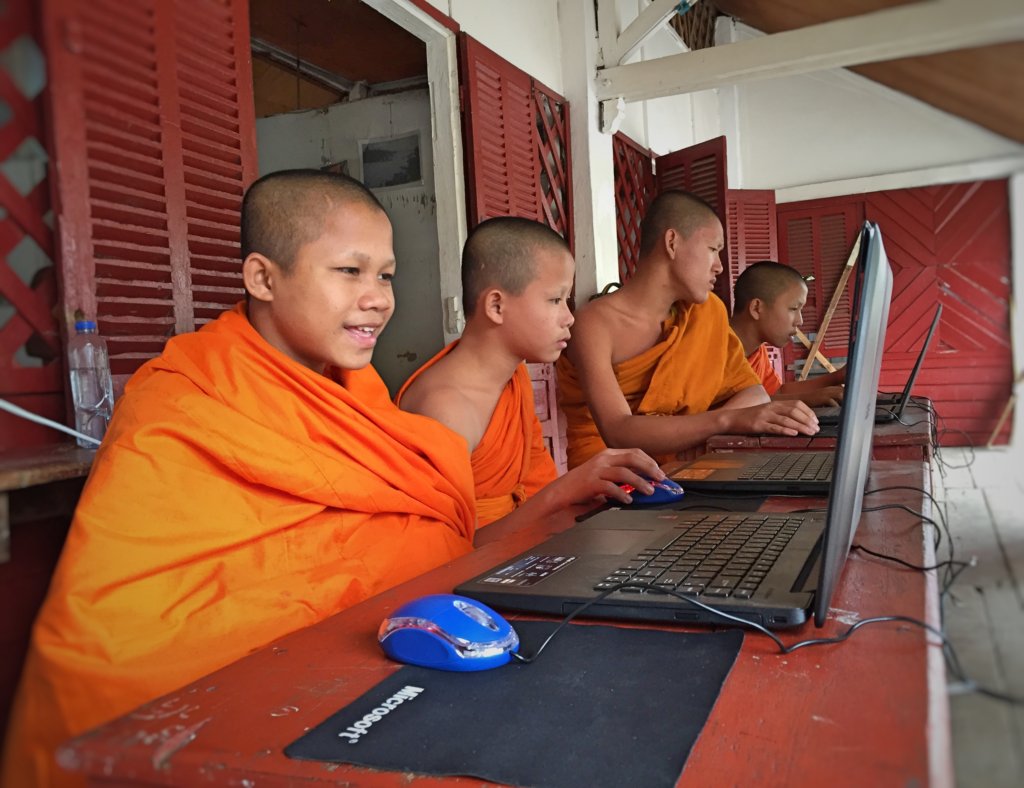 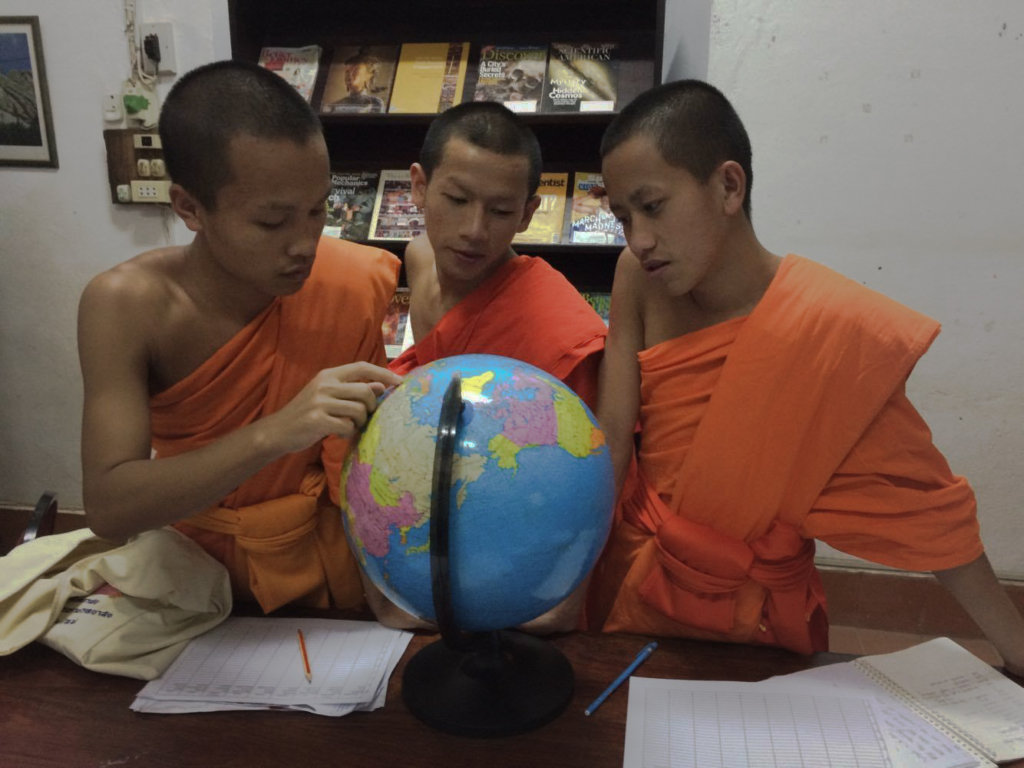 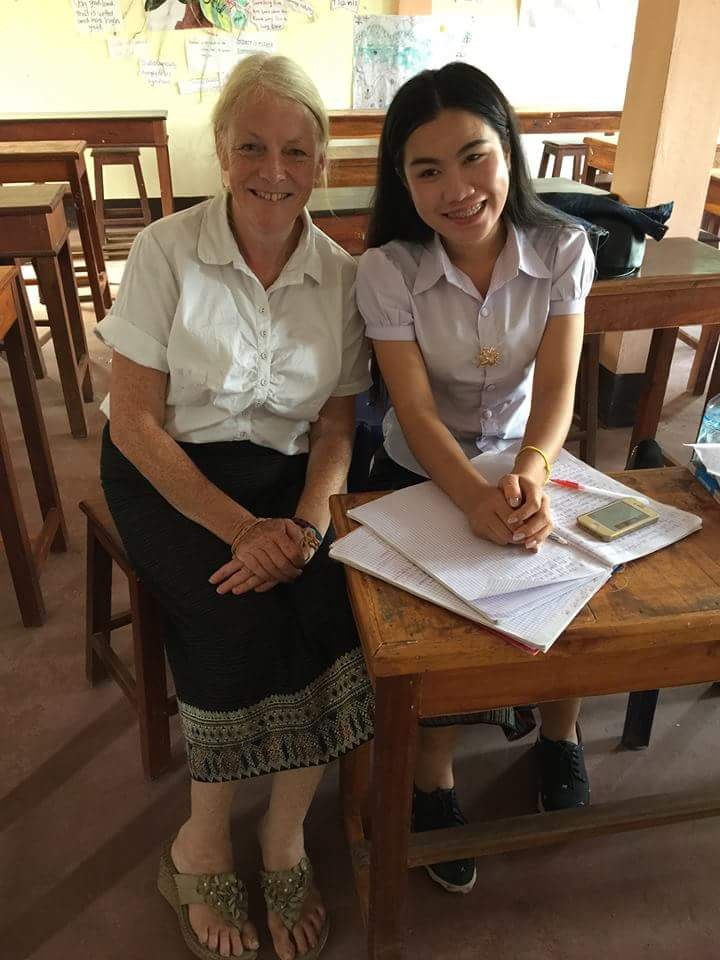 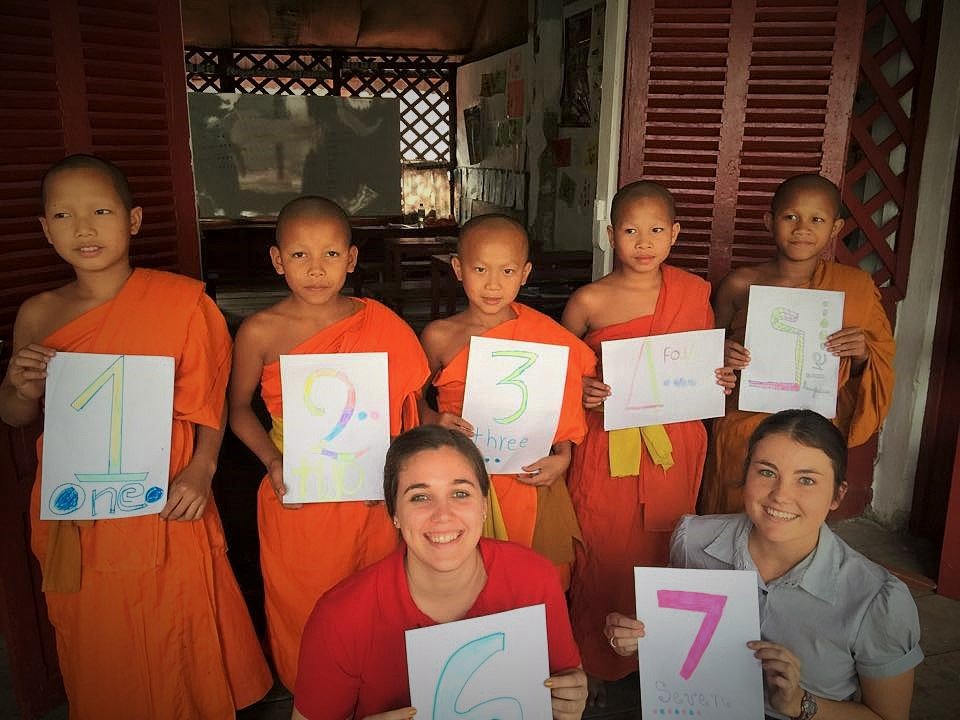 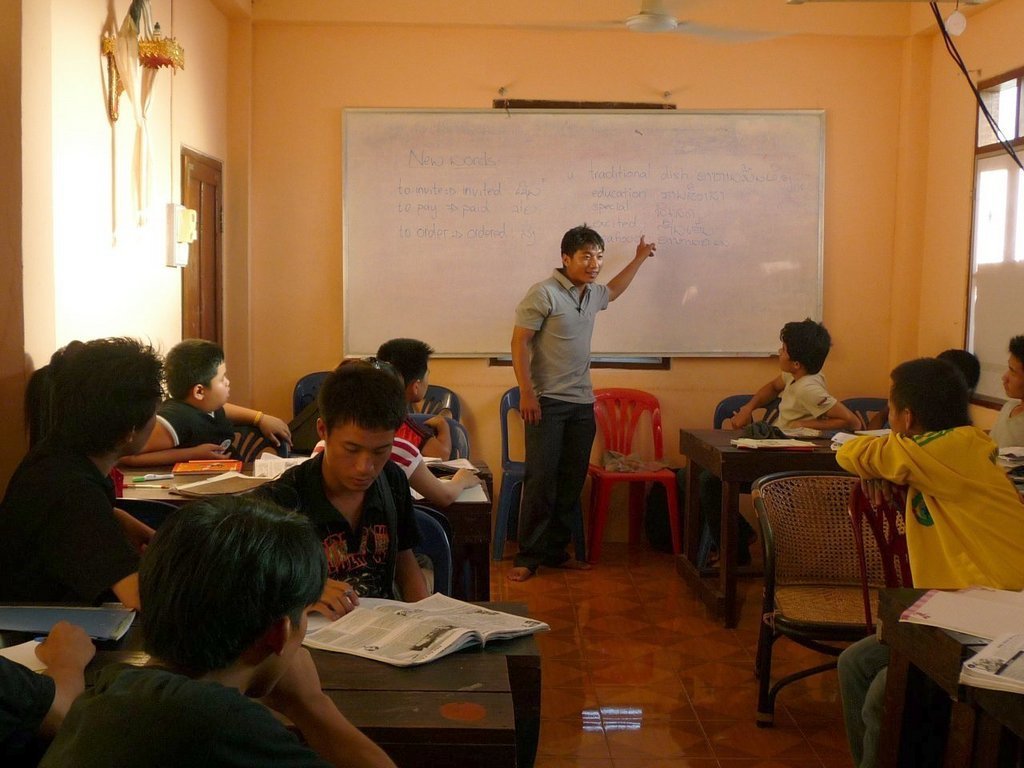 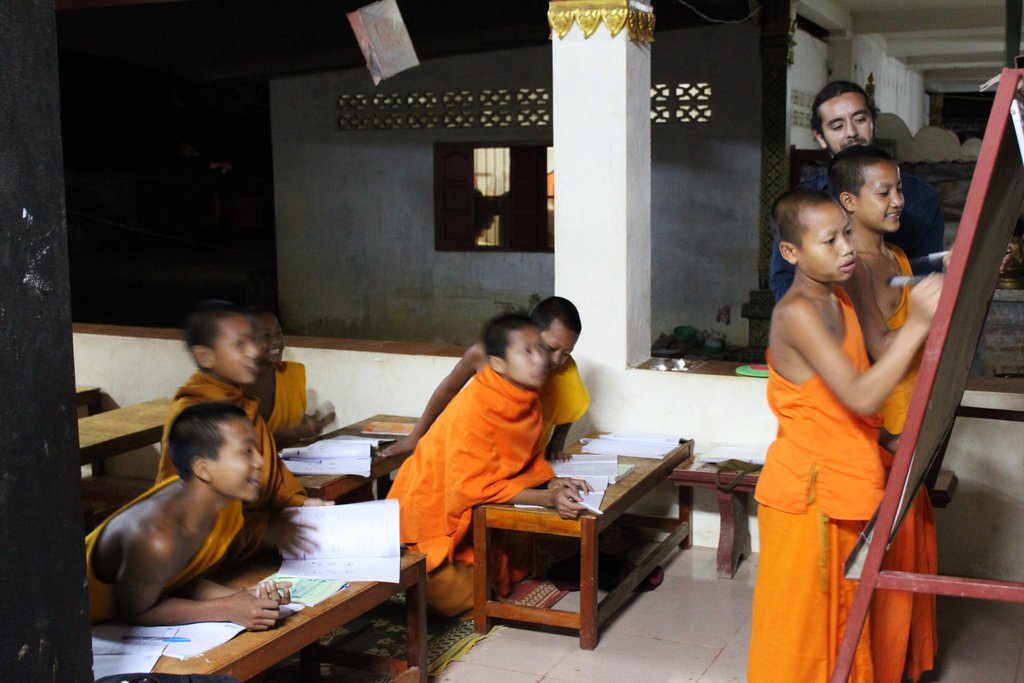 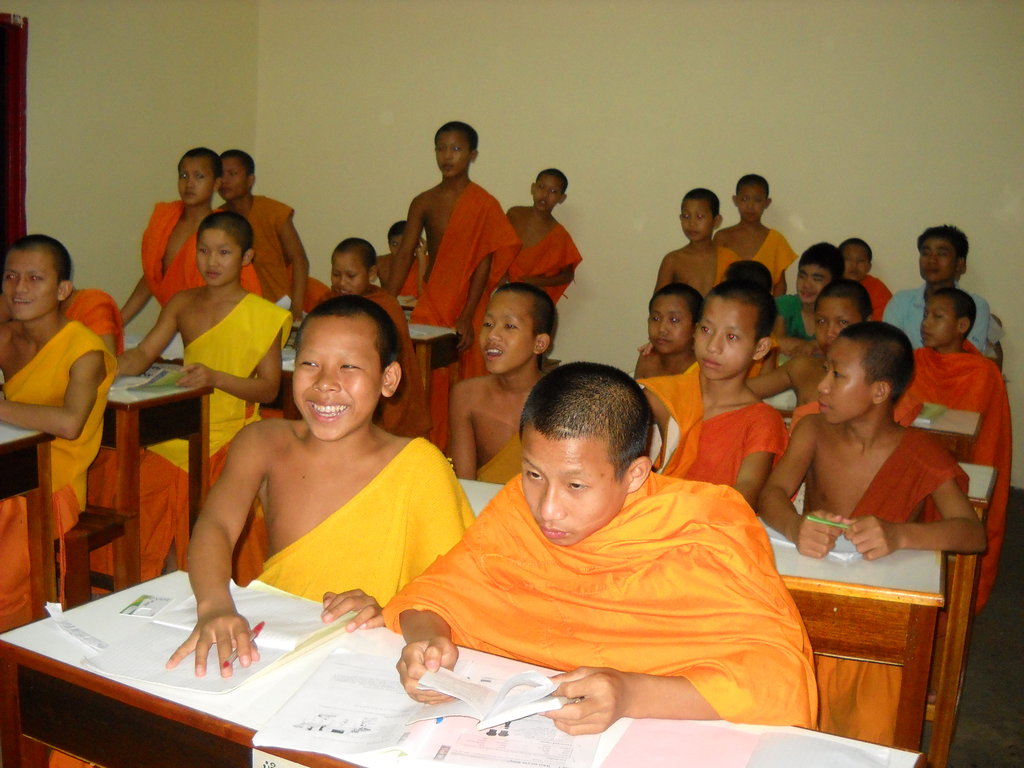 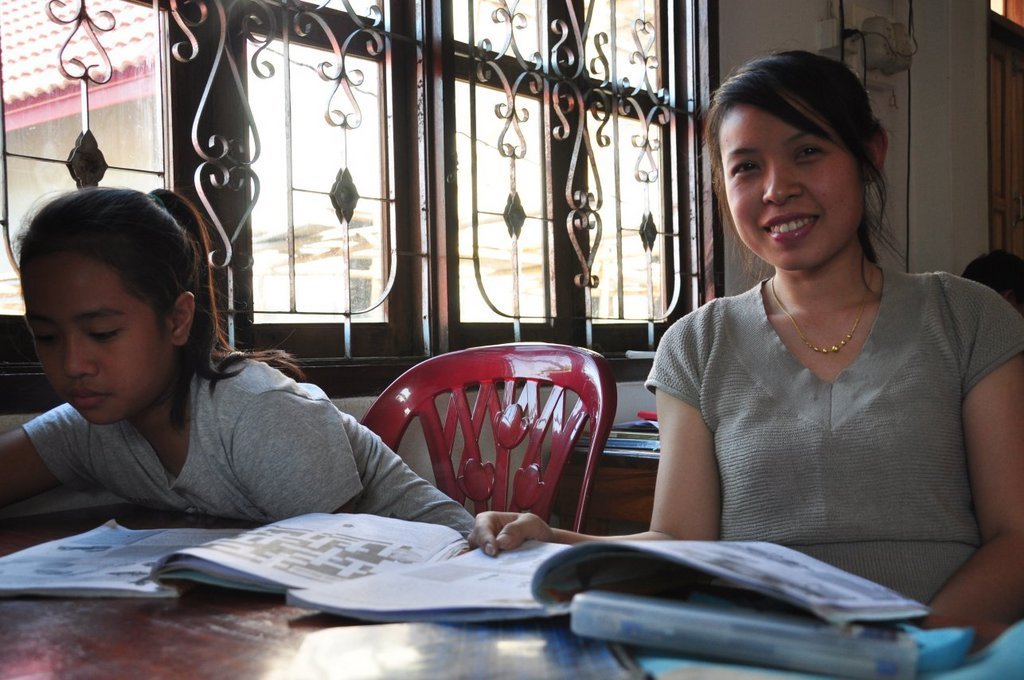 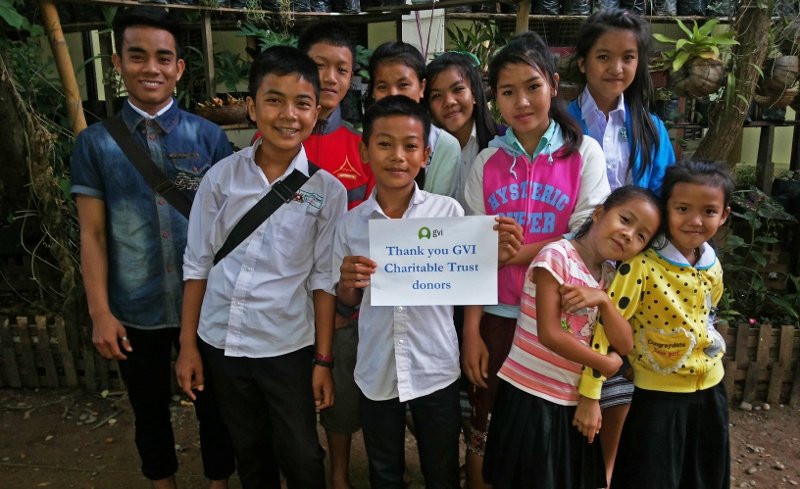 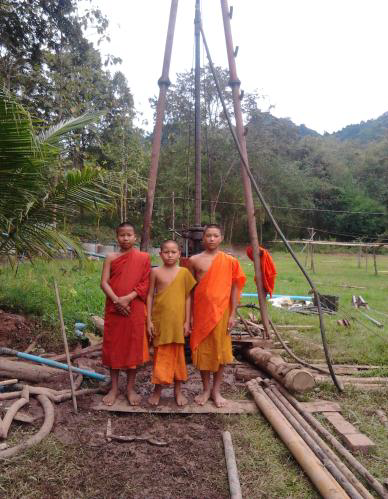 Donations received from the Charitable Trust has been sent to several of the temples where GVI volunteers teach English.

One of the temples that was a recipient was Wat Pha-O. This temple is outside Luang Prabang in a rural environment. It is a large and important temple that is home to over 270 Novices. The donation was presented to Monk Ongeo, the Abbot of the temple. Monk Ongeo stated that this donation would be put to the use of digging a bore to access water. The photos show Monk Ongeo with the donation and the work that has already commenced in digging the bore.

Other smaller donations included whiteboards for 2 other temples – Wat Na Luang and Wat Mano, and a third whiteboard was given to one of our Lao teaching partners, Mr Nii who conducts English classes in his home village in a traditional Hmong house.

A further donation was given to one of our favourite temples, Wat Pasa Viet, for the purchase of a wheelbarrow and cement for the Novices to firstly make the bricks and secondly build a fence on a section of the temple’s property.

Not only are we teaching English, but we are now also making improvements to the environment that the children are being taught in.

GVI Laos began its first construction project in August 2012 with one volunteer, David Bartlett. David was here for 2 weeks during August. The project target for this first time was to refurbish the classrooms at Wat Mano. The school at Wat Mano is the primary Novice Monk School. GVI has been teaching English at Wat Mano for over 2 years. Primary aged Novices complete their primary schooling at Wat Mano before commencing their secondary education at either Wat Pha-O or Wat Sipphouthabaht.

A special feature of Wat Mano Primary School is the collaboration that has occurred  between GVI and Mylibrary.  Mylibrary is a well resourced and active library in Luang Prabang that also works with establishing libraries in schools. Mylibrary and GVI have worked together on a computer project at Wat Mano where the computers supplied by Mylibrary assist in the teaching and learning of English. Mylibrary supplied the computers, desks and programming whilst GVI installed a secure room for the computer space.

An aim of GVI is to work in partnership with locals and through this project, several partnerships were formed. The Director of the primary school and the Abbot of Wat Mano approved the work under GVI’s management and  a local carpenter worked alongside the GVI volunteer. The outcome of this project are 2 brighter and better equipped classrooms for the Novices to study in and the Teachers to teach in.

A blog story on this project can be found at www.gvilaos.blogspot.com

For details on the projects on offer in Laos, see the website at  http://www.gvi.co.uk/volunteer-in-laos 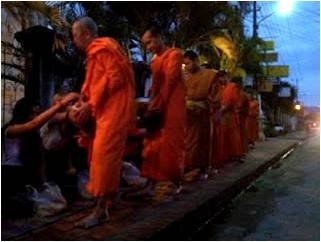 And we’re off and giving….Well, in case you hadn’t heard, GVI Laos is running the most awesome Charitable Trust Challenge ever! 13 volunteers and staff are getting up in the dark at 5am to give alms to the passing parade of some 150 Buddhist monks and novices in the daily ritual known in Lao as Tak Bat. Why would they do it? To inspire their friends, family, colleagues and strangers to donate to the Charitable Trust Challenge, which in Laos raises money to provide educational sponsorships and scholarships to disadvantaged young Lao students.

So, how is it all going you ask? Amazing! Day One saw everyone up really early, dressed resplendently in their sins and scarves (traditional alms-giving attire). Local elder, Chanpheng, had laid out mats along the road and provided ritual silver bowls to aid in the alms giving. Volunteers were loaded up with biscuits to offer – sticky rice being just a little too challenging for the uninitiated! – and participants proceeded to drop the little parcels into the collection bowls of the passing saffron procession. Tak Bat in Luang Prabang is sometimes distorted by tourists who fail to show proper respect (http://landlopers.com/2012/05/27/alms-luang-prabang-laos/ ) for the tradition and instead use it as another tourist attraction to be exploited. GVI are proud to reverse that tendency by ensuring volunteers are dressed in traditional garb, seated properly, follow all protocols under the watchful eye of the village elders, and refrain from the photo circus so common during the ceremony. It’s a delight to see!

So Day Two of a total of 5 mornings has been ticked off, and volunteers were rewarded this morning with a stunning sunrise on the journey home. With merit-making in abundance and £2555 raised by volunteers and staff – representing 50 donations to date and 51% to target – it has been a successful Challenge so far and looks set to be one of Laos’ best yet! 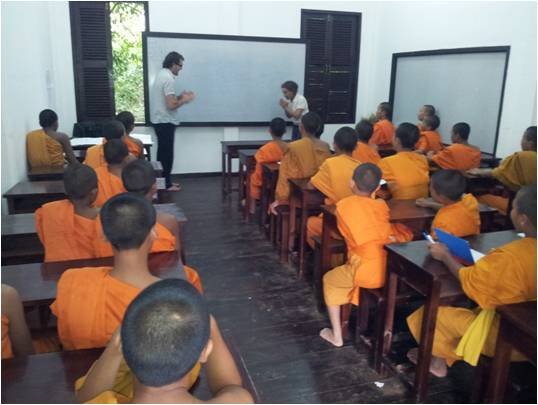 GVI Laos has just completed the first 4 weeks of Term 1 2012 teaching English at Wat Pha-O Buddhist Secondary School - a newly purpose built school in the Pha-O village about 20 minutes north of Luang Prabang. GVI Project Manager was asked personally by the Abbot of Wat Pha-O, Satu Ongeo, to organize the implementation of an English Program in the school. Satu Ongeo has welcomed the GVI volunteers to work there. This invitation is indicative of the good name that GVI has within the Sangha Education Community as Satu Ongeo is one of the High Monks in Luang Prabang. He  holds responsibity for the secondary education of Novices and Monks in all of Luang Prabang.

Satu Ongeo has been the driving force in getting the school built on the property of Wat Pha-O, a beautiful forested large piece of land, bordered on one side by the Mekong River and on the other by dramatic limestone cliffs dense with growth.  From the classroom windows this vista is breathtaking. It was a purposeful intention to build a new school outside of Luang Prabang in a rural environment so Novices would have less distraction in their lives compared to what they experience in living in temples in Luang Prabang with the increased tourism and growth.

Wat Pha-O School is home to over 270 Novices. The vast majority of the Novices living and attending school at Wat Pha-O are from the northern provinces of Laos and typically come from poor farming families.  Whilst doing merit for their families and learning the Dharma by becoming a Novice, there is the added benefit of receiving a better education than would be found in their villages. Wat Pha-O is well known within the Luang Prabang Buddhist community due to hosting a yearly meditation retreat for hundreds of Monks, Novices, Nuns and lay people.

GVI’s teaching has begun at the commencement of the academic year, a wonderful opportunity to measure the growth of the students’ English abilities. Students have been organized into 6 classes of approximately 25 students per class for 5 afternoons per week, 2 hours per day. This is a significant increase in English tuition compared to the Buddhist Secondary School in the heart of Luang Prabang where the students only receive 1.5 hours per week English teaching due to a low capacity of English teachers on staff.

GVI Laos continues to work with awesome local teachers to deliver quality English lessons to our students. Always striving to build strong local relationships and make the Teaching English projects in Luang Prabang sustainable for the long term, it seems our teachers are doing quite well on their own too!

Peng Khamkong, a teacher who has partnered with GVI now for about 2 years, most recently at Xayadeth College and Wat Na Luang temple, is currently awaiting his Bachelor Degree from the Teacher Training College (as reported in this blog post). However, in the interim Peng has received an award from his college as the best student in the class! The accolade comes with an award which was quickly laminated and displayed with pride alongside his GVI certificates for professional development, and the soon to be received Bachelor! 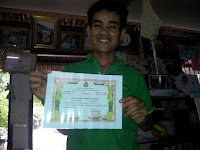