Send 60 Girls in Pakistan to School

By Steve Murchie - Board Chair (acting) and Pakistan project lead 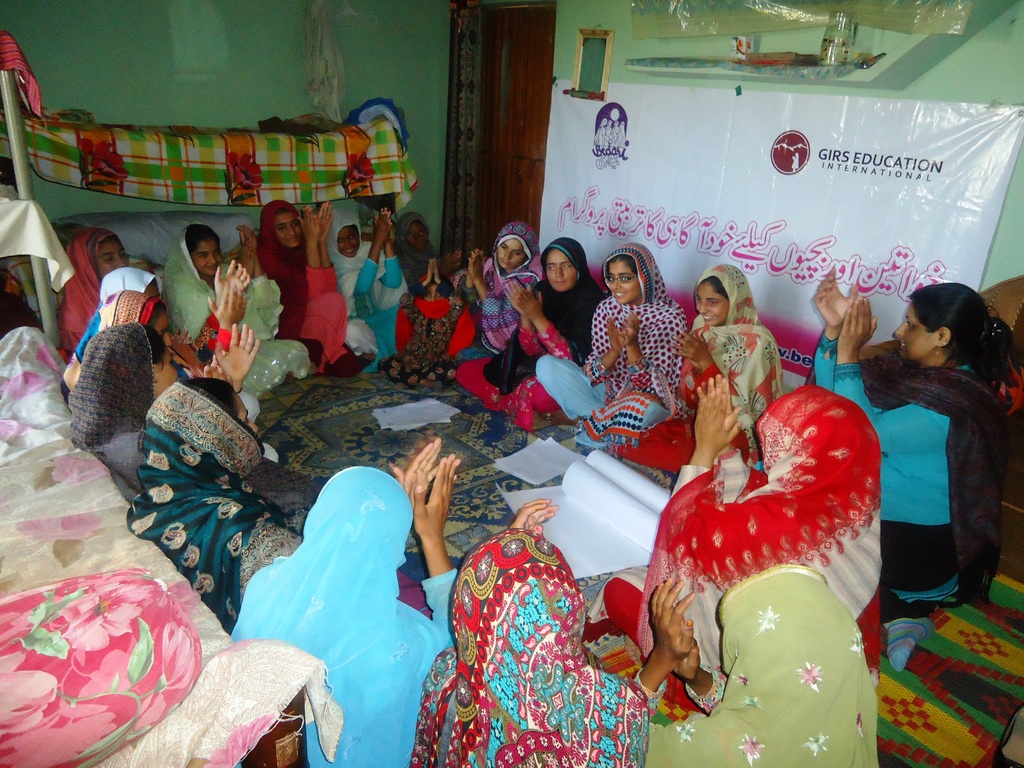 Our program concluded for the 2014-2015 academic year, and progress so far has been excellent. Only 2 of the 101 total girls enrolled at the beginning of the year dropped out, and initial results from academic testing has been good. Bedari, our partner in Pakistan, conducted ongoing monitoring and meetings with parents and teachers.

In addition, and in spite of many logistical challenges during the winter months, Bedari conducted a number of self-growth classes for the students. Because these students come from many age groups, Bedari conducts appropriate sessions on a variety of topics of interest to girls and young women. Highlights from the first year are below:

Number of beneficiaries increased from 71 to 101:
As many parents opted to share the cost of education of their daughters, Bedari was left with surplus funds. It made an analysis of the cost, and after consultation with parents, staff, and Girls Ed, decided to include another 30 girls to the program. The program was extended to another village Dharyala Kahoon.

Results Announced:
Most of the girls went to their respective schools regularly. Annual exams were held for lower classes – from 6th to 10th during initial 6 months. The results for 6th, 7th, and 8th have been announced. All the girls studying under this project have successfully cleared their exams and have been promoted to the next classes. Result for the 9th and 10th is awaited. Exams for classes 11th to 14th would be held later between April and June 2015.

Three girls promoted from 6th to 8th class:
Three girls have been promoted from 6th to 8th class. These girls were studying in 8th class when they dropped out of school, but did not have certificates or any other proof. Initially, the school management did not agree to put them back in 8th class. However, they had promised to promote them to next classes if the girls performed well. This highly motivated the girls to perform well to get back to the class where they had left. They were really happy about this development.

Two girls dropped out:
Two girls have dropped out. They will be replaced as the new academic year begins.

Self-Growth Sessions Held:
Bedari organized 20 self-growth sessions for the girls – 5 in each village. On average, each session was attended by 25 girls. The subjects discussed in these sessions were:

We're very excited about the early success of this expanded program, and are very thankful for your support. If you have any questions, feel free to contact me on smurchie@gmail.com. 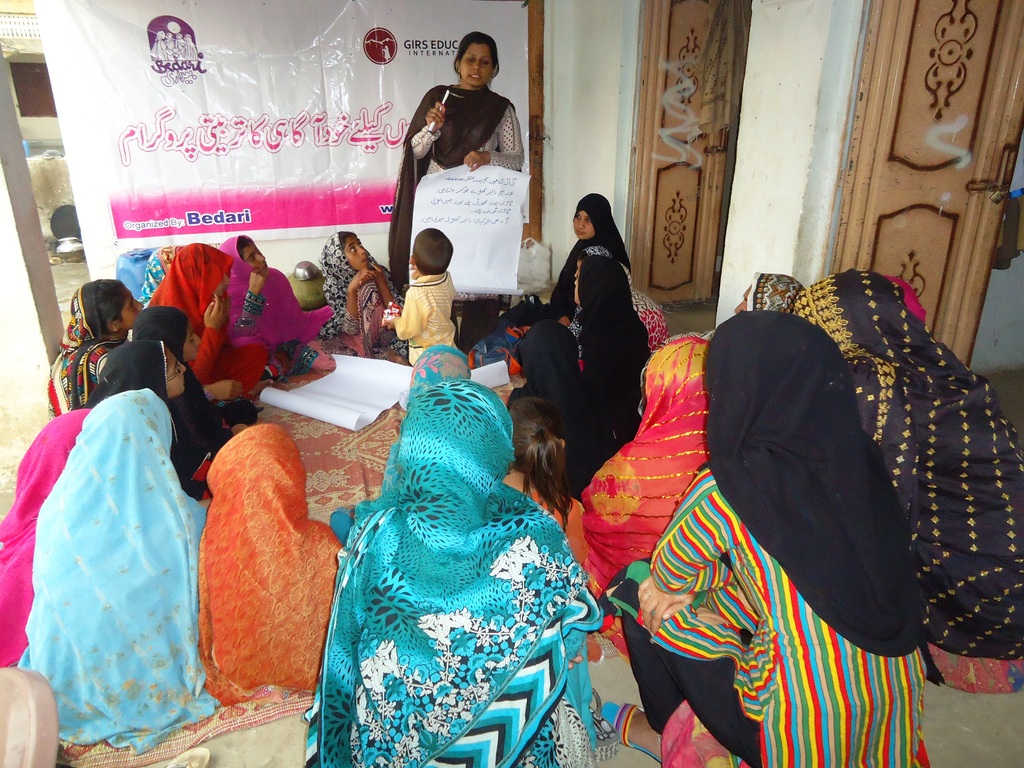 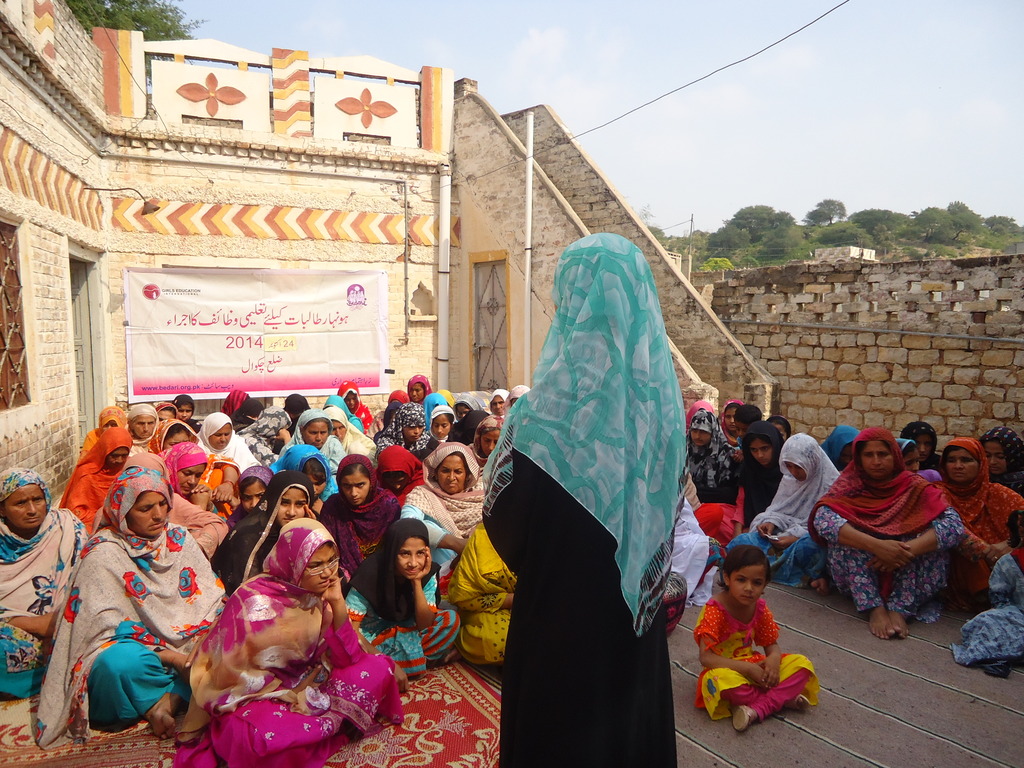 First off, a big apology is due to our donors for delayed reporting. We had a little mixup in communications here at Girls Ed, and we're very sorry not to have been in touch. We shall endeavor to do better in the future.

For those unfamiliar with Girls Education International, we're a tiny, all-volunteer, pass-through organization, that helps raise visibility and funding for established NGOs serving girls' educational missions in regions where young women often don't have equal educational opportunities. This project is our second partnership with Bedari in Pakistan - the first ran for three years in the villages of Laphi and Sar Kalan ending in the Spring of 2014. That program assisted thirty girls and young women through scholarships that primarily helped with logistics of attending secondary school in this remote, rural area. When the program became self-sufficient through the contributions of parents and the community, we agreed to collaborate on a program double the size in the same general region.

Bedari visited the region through the first part of 2014, and settled on three villages that were geographically affiliated: Maira Aemah, Thirchak, and Hattar. A combined cohort of sixty students was identified, and arrangements were made to launch in the Fall. A common thread in the girls' stories is the high cost of transportation to attend school, and we agreed that the scholarships would focus on that need.

After the Fall program began, we had incredible news from Bedari: parents and the community were so enthusiastic about this opportunity, that they were increasing their contribution to the costs. As a result we were able to add another dozen students from the existing villages, as well as add another nearby village called Dharyala Kahoon. In total, we are now supporting 100 students, but at the same expense planned for 60!

We look forward to bringing you continued good news about this program, and sharing stories of the individual students as they progress.

Donating through GlobalGiving is safe, secure, and easy with many payment options to choose from. View other ways to donate
Girls Education International has earned this recognition on GlobalGiving:

GlobalGiving
Guarantee
Donate https://www.globalgiving.org/dy/cart/view/gg.html?cmd=addItem&projid=17979&rf=microdata&frequency=ONCE&amount=25
Please Note
WARNING: Javascript is currently disabled or is not available in your browser. GlobalGiving makes extensive use of Javascript and will not function properly with Javascript disabled. Please enable Javascript and refresh this page.