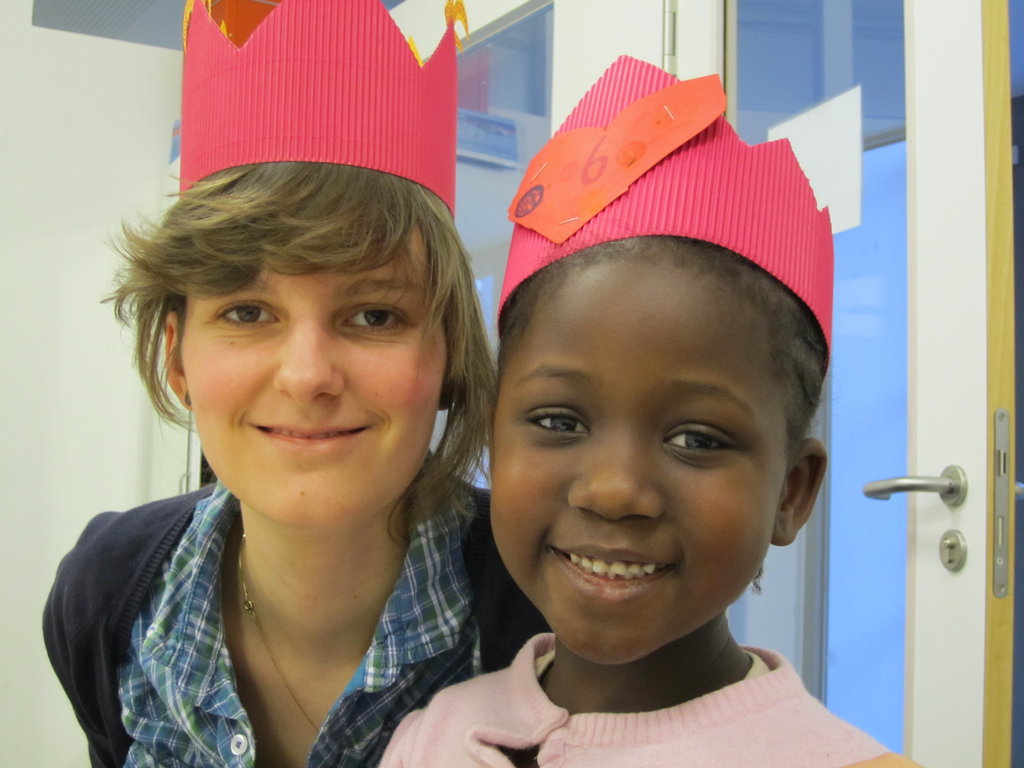 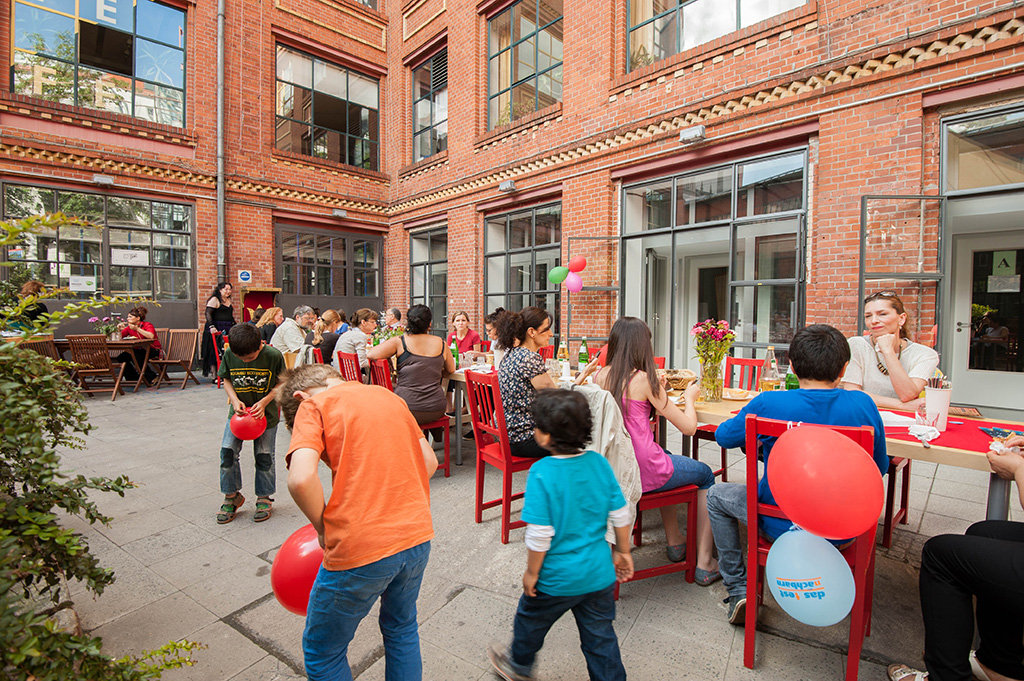 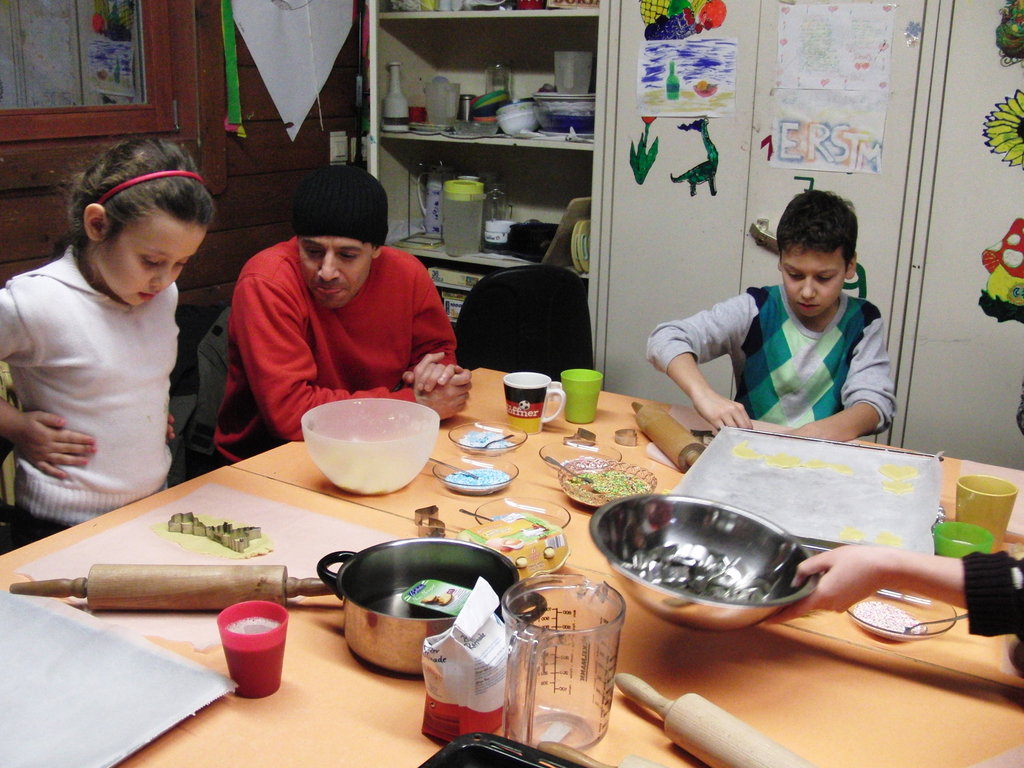 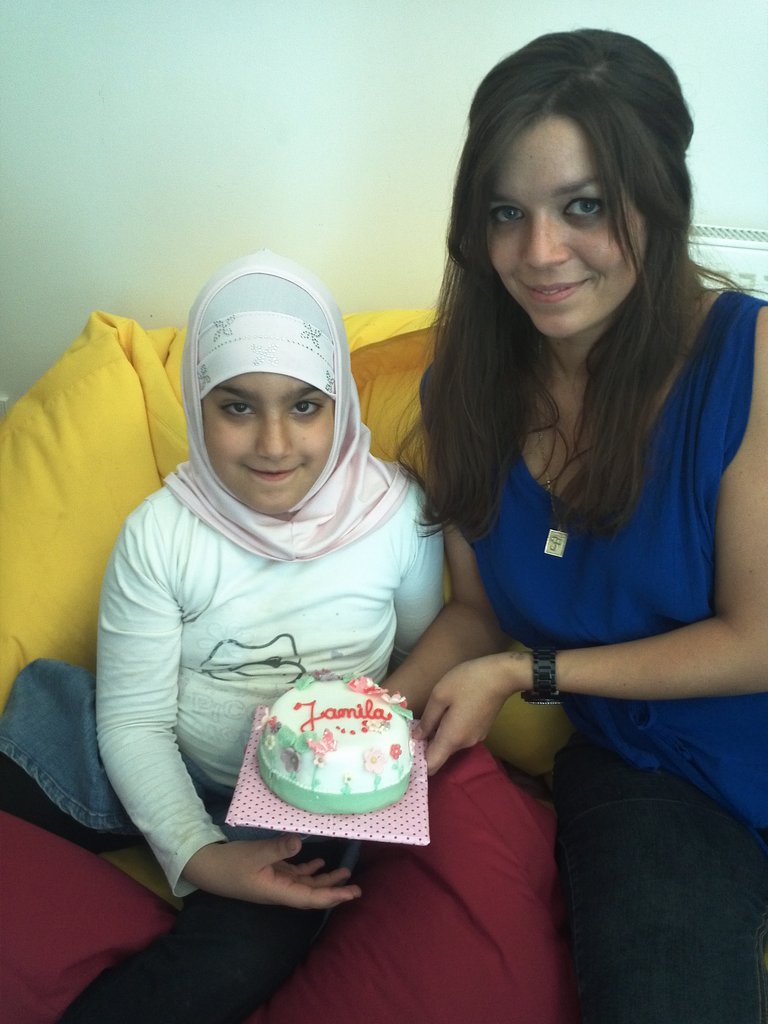 New Tandems get matched & New look is created for PaSch 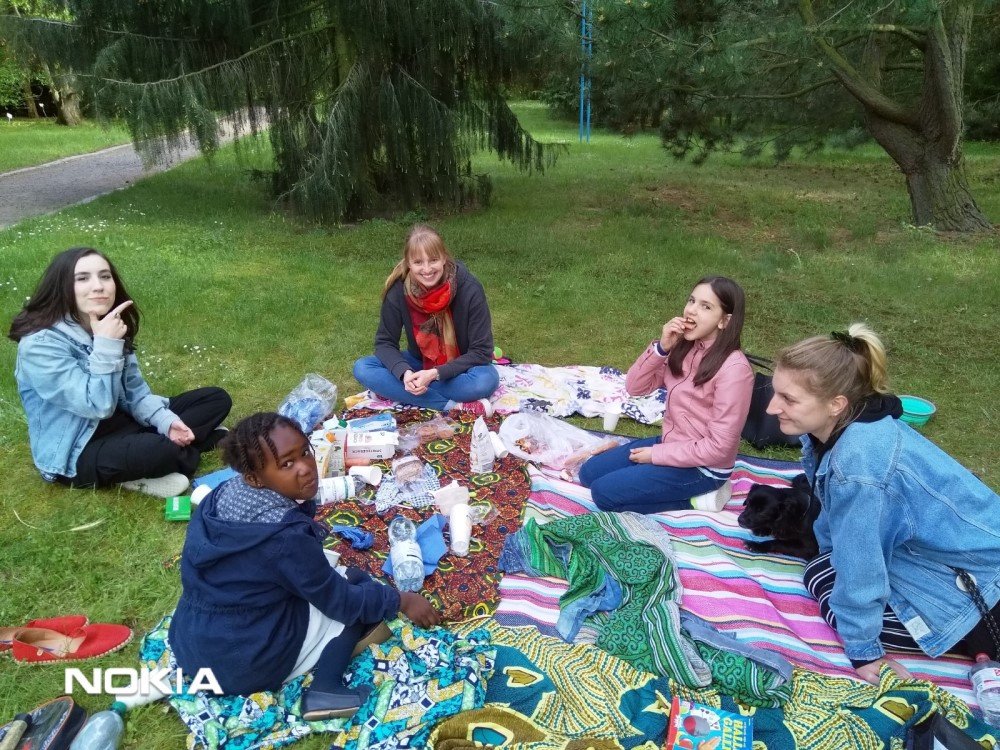 Fieldtrip to the park

What has been going on at PaSch these last months? Well, quite a few things that we want to share with you: As mentioned in the last report there were two major events in may. We celebrated the “Day of neighborhood” and planned a group activity in the parc. The “Day of neighborhood” was a success, a lot of visitors in all ages have been around. Especially children enjoyed the upcycling activities, PaSch offered. This was a good occasion to present PaSch, as a locally acting project, to the neighborhood and to spread the word of mouth within the target group of the project. The next day, when PaSch went to the fieldtrip, it was less busy. Mentors being on holidays, children being sick and the weather being grey and coldish reduced the group to six people. What seemed a bit disappointing in the beginning became an advantage in the end. We went to the park, played outdoor games like badminton and frisbee, had a picnic. The tandems mingled, got to know each other and became closer friends. At the end of the afternoon, the children were smiling brightly and didn’t want to say goodbye.

One of the tandems being part of the group was matched just one week before and the excursion was a good initiation for them: the girl in first grade and the young speech therapist had a great time. In June, PaSch successfully matched another new tandem: a young journalist became the mentor of a six year old Syrian boy who got to Germany a few months ago. Unfortunately in the same time, PaSch had to say goodbye to two tandems. One mentor became pregnant and moved, so she had to end the mentorship. The other mentorship was ended officially, because the mentee is almost 15 by now and their contact got organically.

In the meantime office work went on and the project coordinator fostered public relations and communications in various ways. PaSch designed a new logo and a new information brochure. Both present the project in a comprehensible and appealing way. On top of that, an article presenting the successful story of a PaSch tandem was published in one of Berlin’s major weekly papers. After attending a one day seminar on wordpress the project coordinator revised and reconstructed the PaSch website with a wordpress backend this time. Another article, talking about PaSch was published in a professional journal. This one presented the evaluation project that was described in the last report. Moreover, PaSch was listed in new volunteering platforms, which already show first effects.

Despite all this activity, summer slowed down the daily business and the project coordinator could participate in some advanced trainings. Working within the field of mentoring requires high skills in dealing with diversity, in the matter of age, cultural diversity etc. Enhancing her personal skills comes along with ensuring the quality standards of the project. Therefor over the course of six weeks five days were dedicated to improve diversity skills and intercultural competences.

In July the project coordinator was on holidays and things calmed down a bit. But during her absence five people contacted PaSch wanting to become a mentor. Therefor the project’s dynamic gets lively again and we enjoy good prospects, like a boat trip with the PaSch group in late summer. On top of that, August will be the time to get to know the new volunteers and hopefully September the time to train them for mentoring. With your help, dear donors, all of this work could be done and is going on. Thank you! 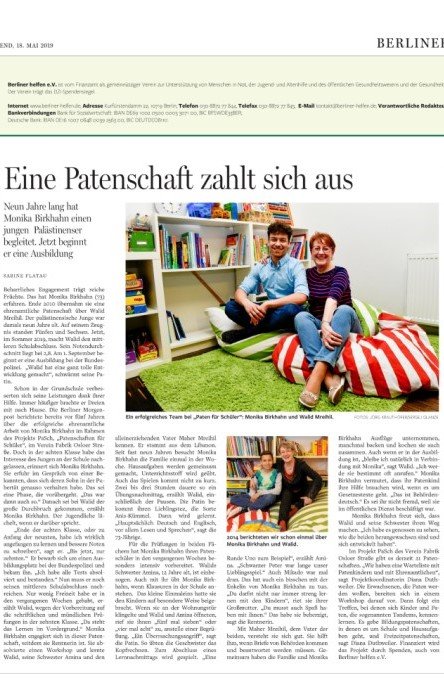 Article in the weekly paper

Day of neighborhood in the courtyard 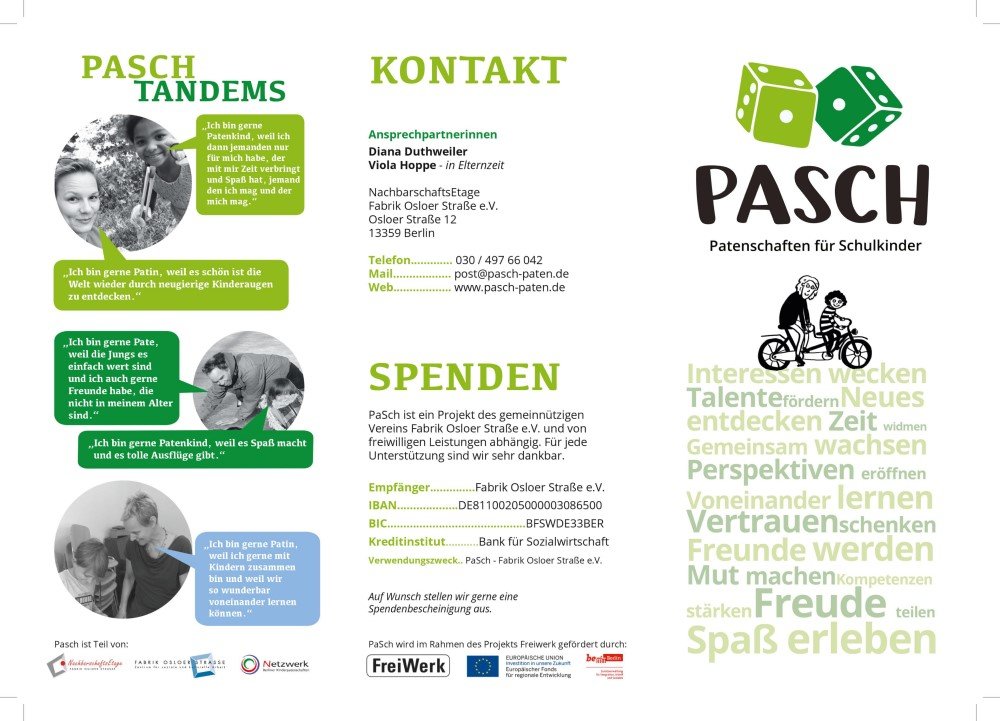 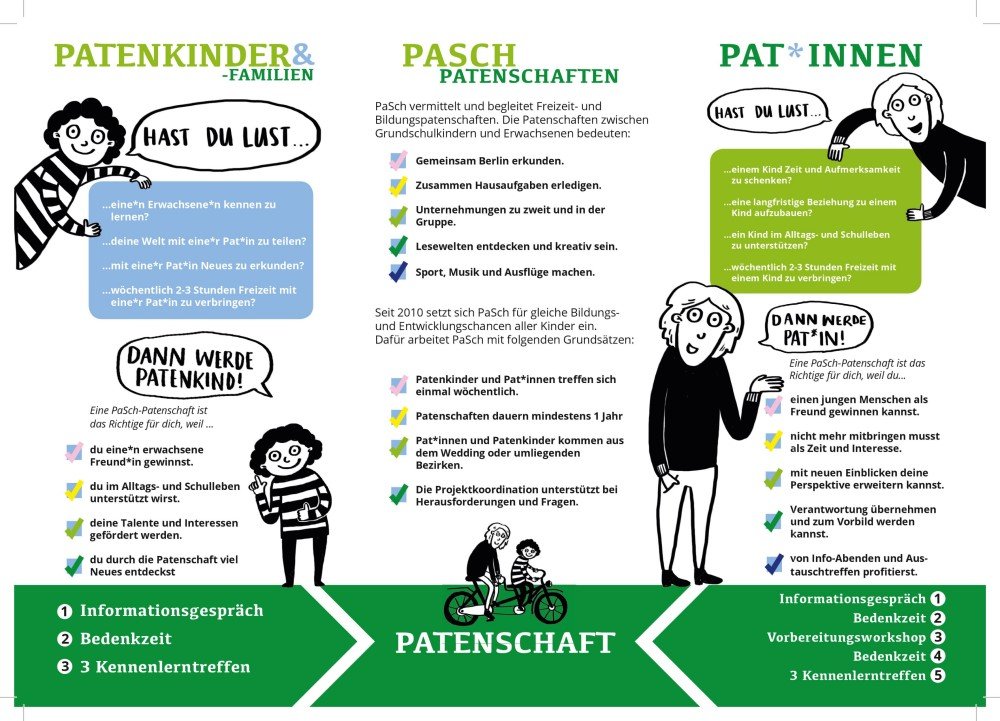 Donating through GlobalGiving is safe, secure, and easy with many payment options to choose from. View other ways to donate
PaSch at NachbarschaftsEtage at Fabrik Osloer Strasse e.V. has earned this recognition on GlobalGiving:

GlobalGiving
Guarantee
Donate https://www.globalgiving.org/dy/cart/view/gg.html?cmd=addItem&projid=19905&rf=microdata&frequency=ONCE&amount=25
Please Note
WARNING: Javascript is currently disabled or is not available in your browser. GlobalGiving makes extensive use of Javascript and will not function properly with Javascript disabled. Please enable Javascript and refresh this page.