Our life after the summer camps you donated for? 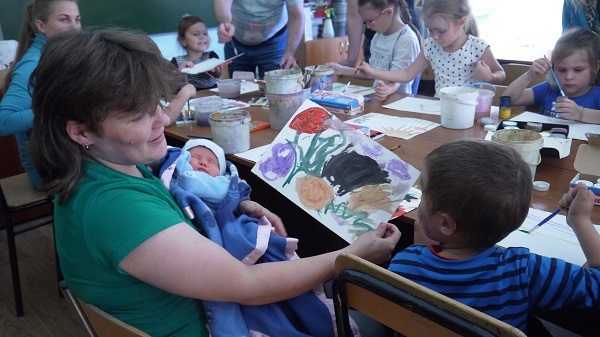 Natasha with her sons

As one of our wonderful group of supporters you have heard about the summer camps we run for parents who grew up in Russian orphanages and their children.  You might not realise that we support these families through the year also with weekly group support sessions for families.  Today I'd like to tell you the story of one of our mothers who has been involved with our organisation since 2007.  Natasha is typical of our mothers in that her needs are complex on both a practical and emotional level, but her powers of compassion and courage are also extraordinary.  Over the last eleven years she has shown great determination to improve life for herself and her children and we will be there for her and her family for as long as she feels she needs us.

Natasha was one of the first orphanage-leavers to come to our support group.  She helped other mothers to come to our parenting classes by waking them up on time, or encouraging them not to drink on the night before.  Many of her friends' children grew up "in her arms" because her friends either had to work long hours or were dependent on alcohol.

Natasha had her own share of problems.  She worked as a seamstress, but her employment was never formalised so she wasn't paid when she got sick.  She also was frequently short of money because she had bought food for her friends' children or had bailed one of her friends out of police custody.

Worst of all, she was given a room in a communal flat, but a fellow tenant forced her out.  We managed to get her back in her accommodation, but the neighbour made her life unbearable, so she was soon back living with friends.

For a while, we lost contact with Natasha, but then she called from the maternity ward.  Natasha was a mother!  Natasha's husband also grew up in a children’s’ home and it as difficult for them to build a family.  Natasha was optimistic and came regularly to our support group and to our summer camps.  She even moved back into her room in the communal flat, but the conflict with the neighbour only got worse.  When the police wouldn't help, Natasha turned to a local parent-child support centre.  They offered to put her on the waiting list for a new home if she divorced her husband.  The arguments were so convincing that, without consulting with her husband, she filed for divorce.

Her husband was confused and angry and moved out.  It took some years to rebuild their relationship, but they are now back together and have two children.  Their second child was born without all his fingers.  When her scan showed problems, Natasha was offered a termination, but she refused.  The other mothers in our group don't understand why she would want to raise a damaged child, but Natasha is very attentive and gentle with both her children.  She says, I'm changing a lot, I'm becoming kinder and more patient."

We are very proud of Natasha and all that she has achieved in the face of incredible adversity.  The summer camps are an important part of her family’s story alongside the year-round support we give her.  They provide an opportunity to learn in a relaxed but intense environment, and a store of bright memories for Natasha and her children to look back on.

Thank you very much for helping make the summer camps possible.  Soon we will be starting to prepare our families for summer 2019.  What a thought!