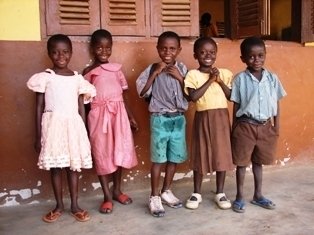 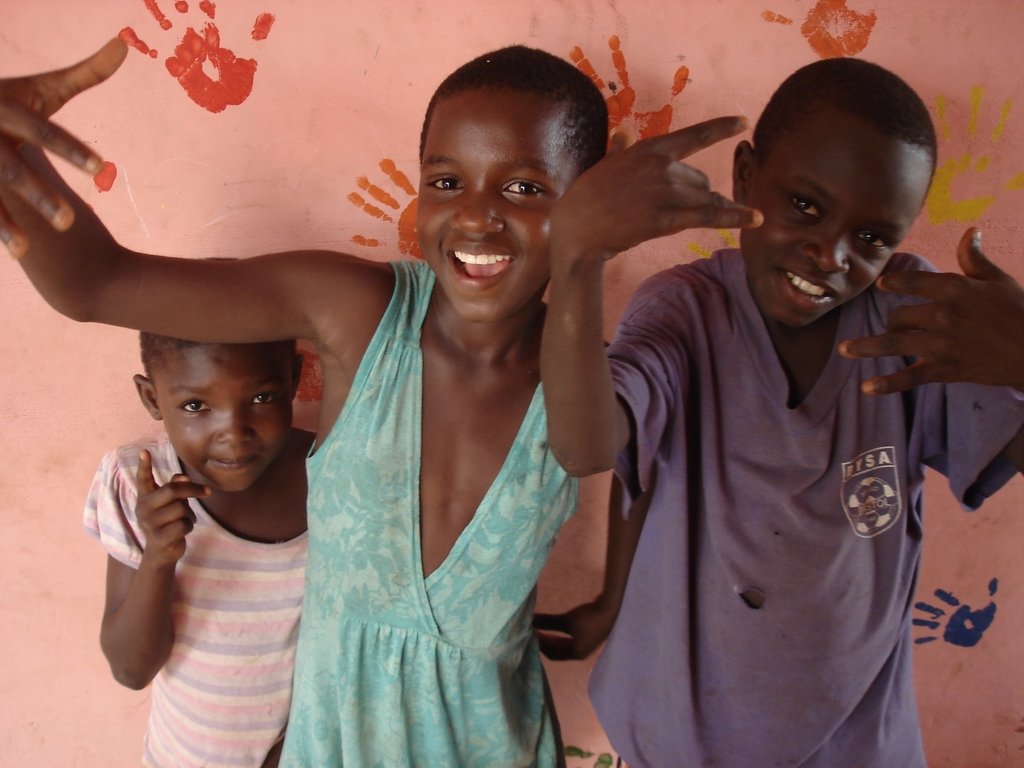 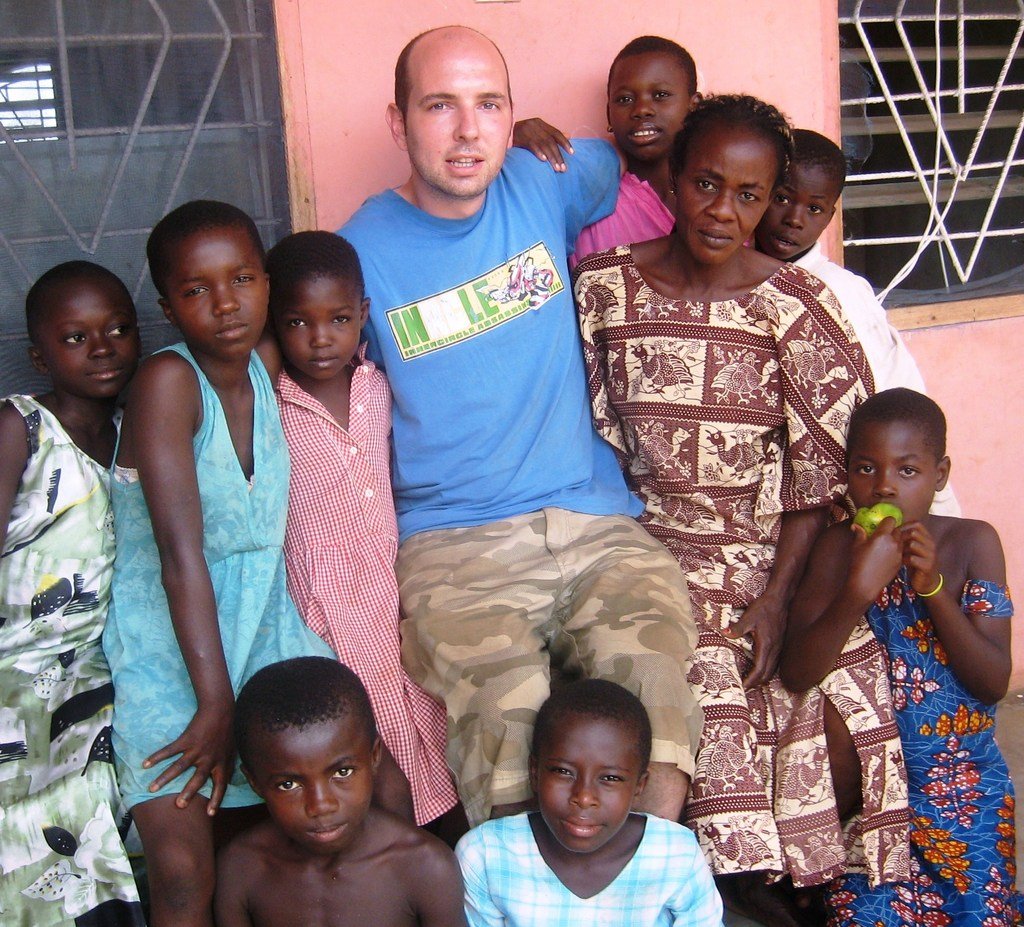 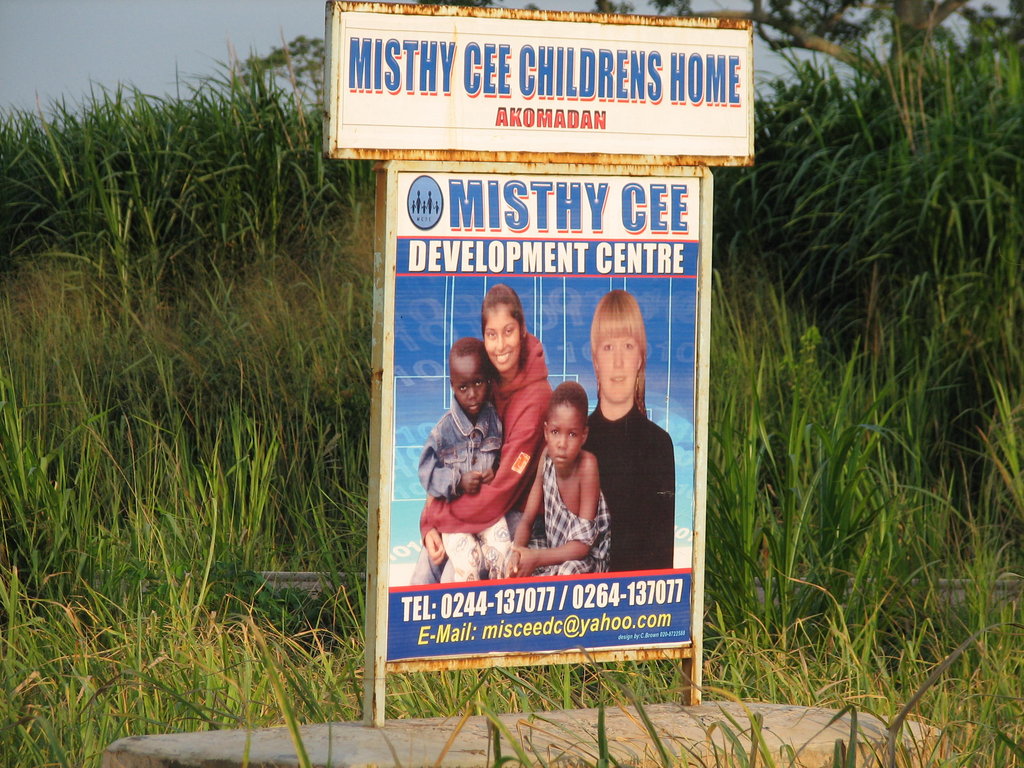 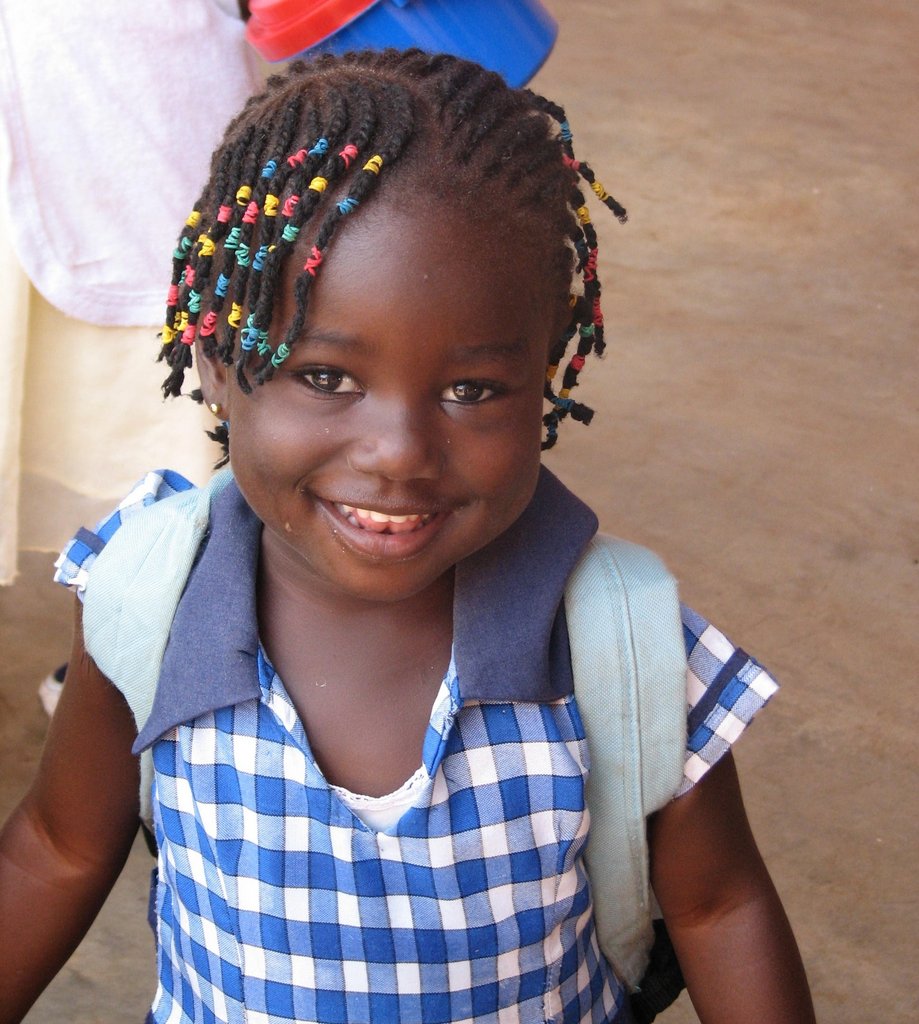 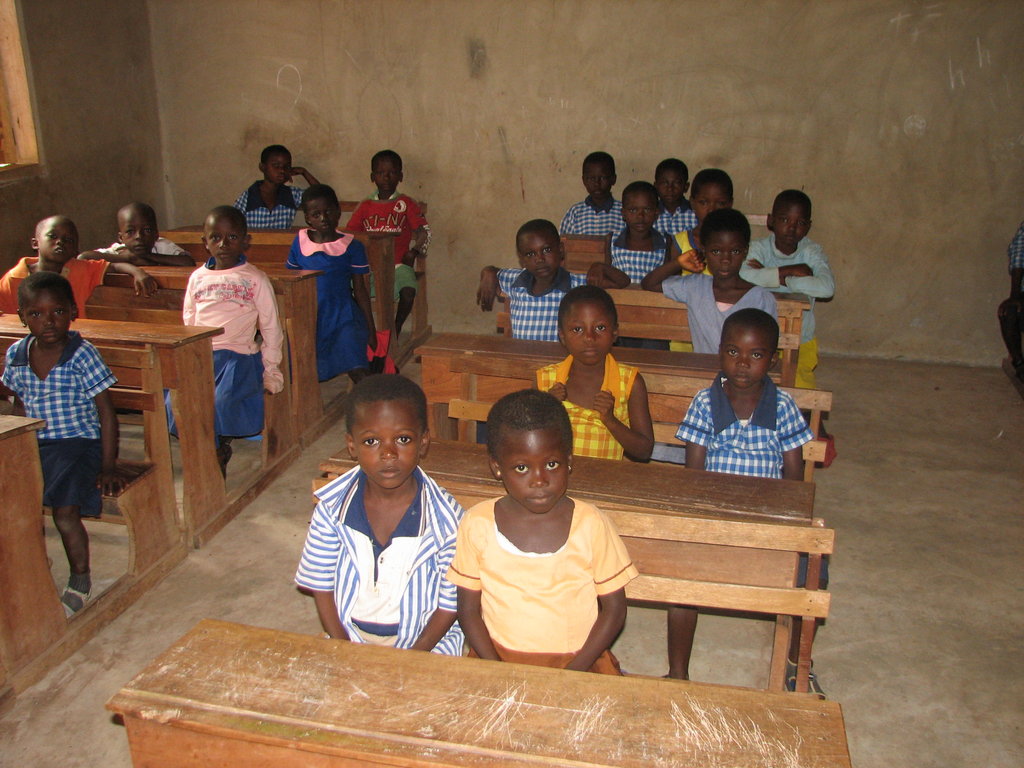 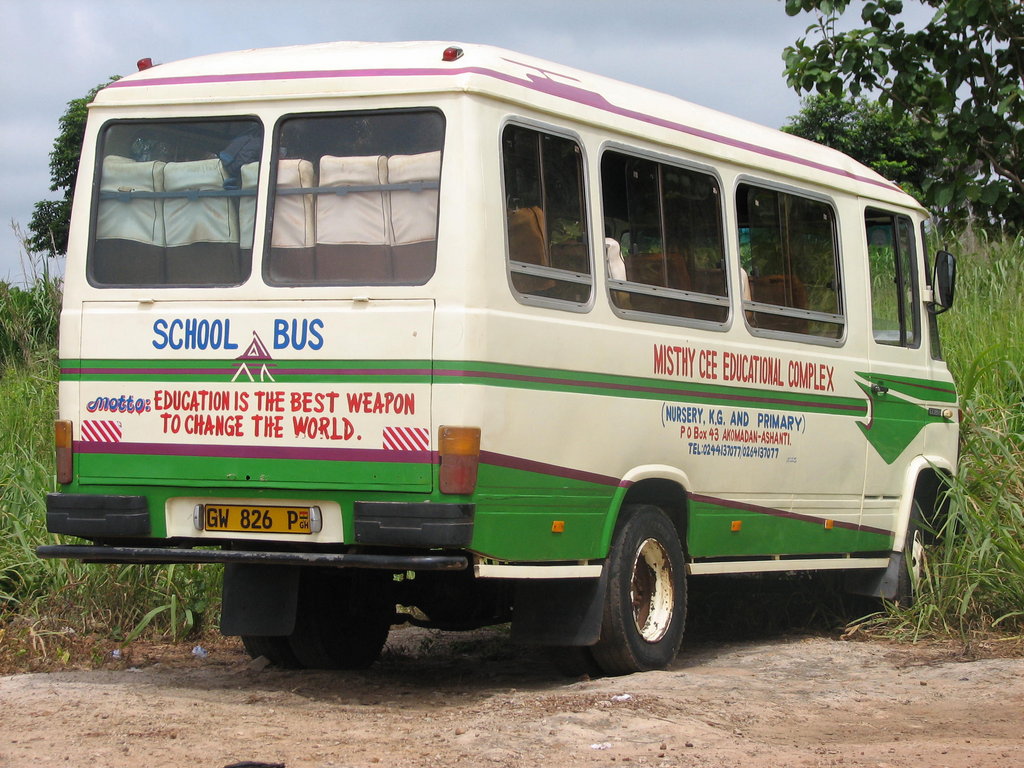 With Dieudonne Kakpo I travelled to Accra on Tuesday 29th March leaving Cotonou in Benin at 7.00am from Place de l’Etoile in a mini-bus run by the company Tunde. Apart from the hassle at the borders of Togo and Ghana the journey went smoothly and we were met by Issa, Misthy’s brother. Issa works at the Accra Polytechnic and he had kindly arranged accommodation for us at a nearby Methodist Guest House.

Next day we were accompanied to the bus station and caught a forty-seat air-conditioned coach to Kumasi. The first hour-and-a-half we covered few kilometres on very poor roads and then stopped at a ‘service station’ for a ten-minute break. After this the road was good and we arrived in Kumasi after a seven-hour journey. Misthy met us and we then went on to Akomadan (aka Akumadan) in a taxi.

We were welcomed very enthusiastically at the Centre by Papa and the children. Our rooms were very comfortable with effective mosi-nets. So, ‘African showers’ over and done, we were provided with a meal of rice and a sauce (a bit too spicy for me), but after a day of only a packet of Hobnobs it was well-received.

The children were now watching TV before going off to bed, so we joined them and found a space to sit on the one bench. Later in the week we were pleased to be invited to play cards with the youngsters and the mat was quite adequate!

The resident children, twenty-four during our stay, used three dormitories and the furniture is pretty basic. There were however quite a number of bunk-beds waiting to be assembled and though we offered our hands we were advised that since there were missing parts the job would have to wait for another day. Relief!

During our four-night stay Misthy drove us in his ‘jalopy’ to the village and to a nearby town to an amazing market. He showed us his family home in the village, the base previously used by HATW volunteers. Everywhere, Misthy was warmly greeted by everyone and he responded with his routine greeting, ‘Peace and Love’!

We walked to the school at MC Centre, met the head teacher and other teachers, including a European wife of a local Ghanaian and the children. The school is well-attended and the finances of the Centre benefit from the fees paid by children from the local community. The Centre has a bus for bringing children to school and for taking the older youngsters from the Centre to other schools.

The children were eating on the walk-ways outside their classrooms and so it was obvious that there is the need for a better dining facility. This facility, when finished, will also be made available for the residents at the Centre. Currently cooking and eating is an outdoors event. The Gaz cylinder was empty!

Currently the only toilet and washing facilities available to the residents are outside the main building. The batteries for use with the solar-powered electricity supply (which was working) are placed in the indoor facility.

Misthy was well on the way in his preparations for one of the large front rooms to be completed as an office. He had bought doors and the walls were newly painted. An older pupil, Robert, was using this room which is adjacent to the TV room, as a base for doing his homework and so Misthy agreed that the office might have this dual purpose when there was supervision. There is a need however to furnish the office/study.

Misthy fully shared information in respect of the Centre funding and we discussed the requirements which Social Services might have in respect of accountability. We visited Mary at her children's Centre in Offinso with Misthy and discussed the book-keeping recommendations she had made following her visit to Misthy Cee. Mary also took us around the Centre and then on to her poultry farm. Misthy would wish to establish a similar facility at his Centre and there is certainly real potential for him to do this given the land available. Misthy accepted books for recording the names of the residents and visitors to the Centre and another for noting all financial transactions.

Currently Misthy is seeking to appoint an additional carer, a mother-figure at the Centre is needed!

We enjoyed our visit enormously and were very grateful for the warmth of the hospitality extended. Support another project run by HANDS AROUND THE WORLD that needs your help, such as: 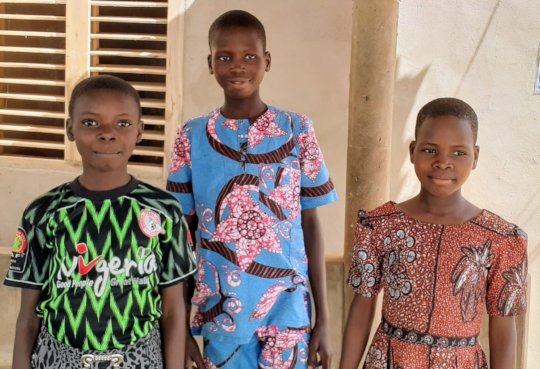 Supporting village children into school in Benin
Find a Project

GlobalGiving
Guarantee
Donate https://www.globalgiving.org/dy/cart/view/gg.html?cmd=addItem&projid=2633&rf=microdata&frequency=ONCE&amount=25
Please Note
WARNING: Javascript is currently disabled or is not available in your browser. GlobalGiving makes extensive use of Javascript and will not function properly with Javascript disabled. Please enable Javascript and refresh this page.