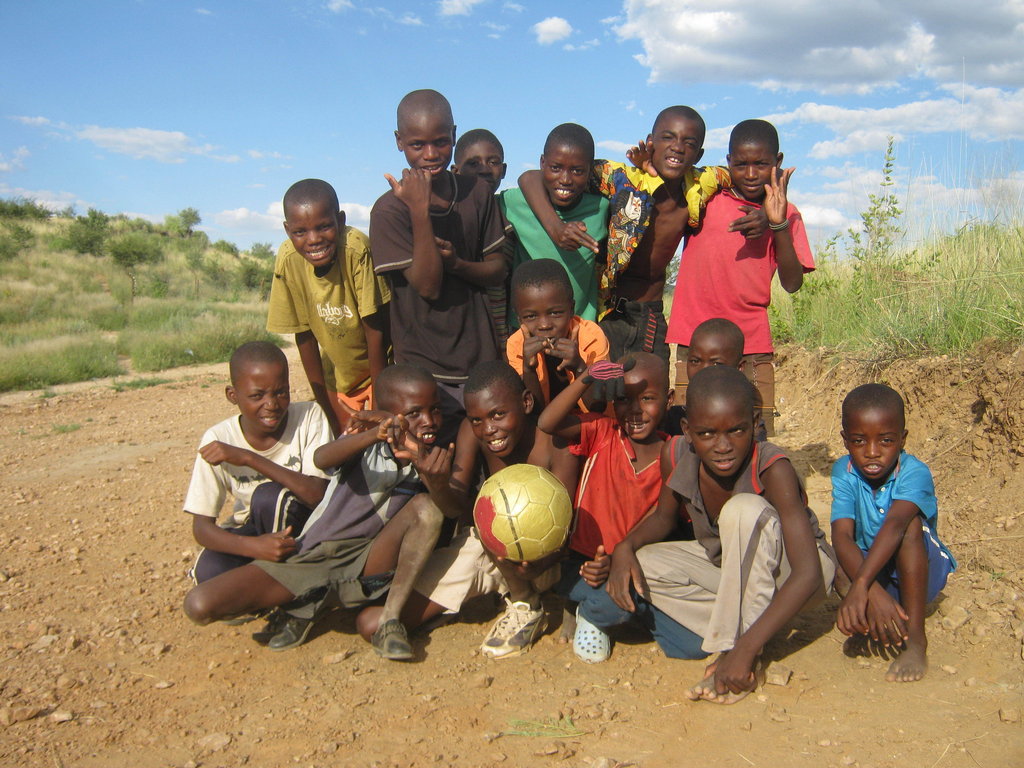 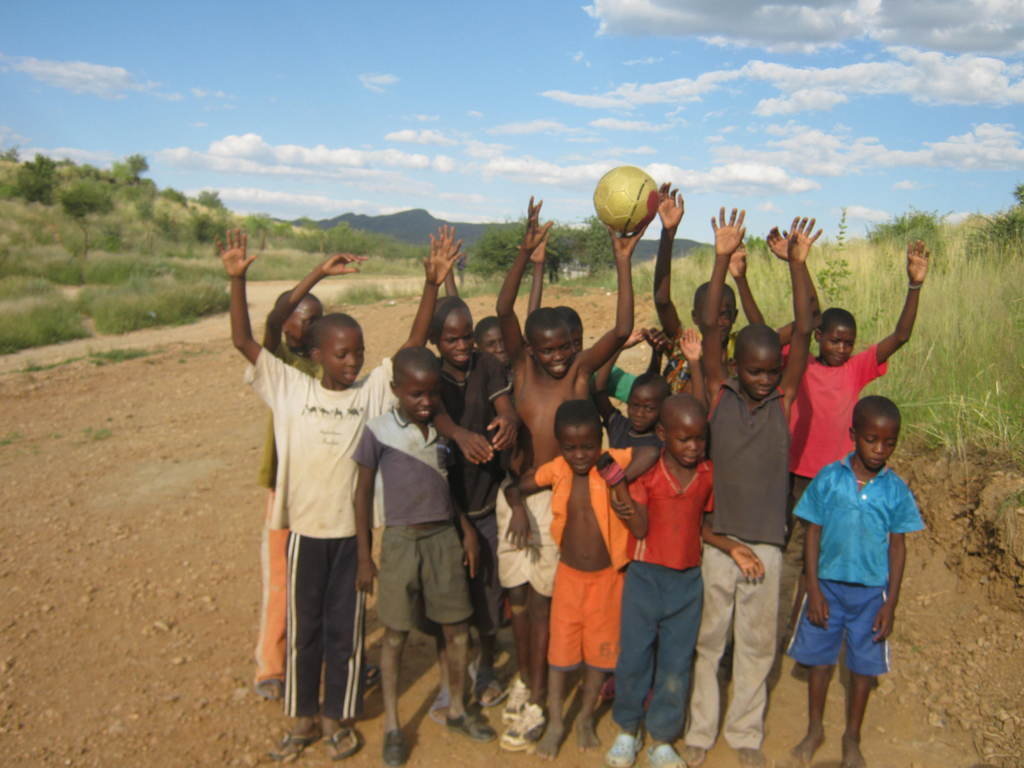 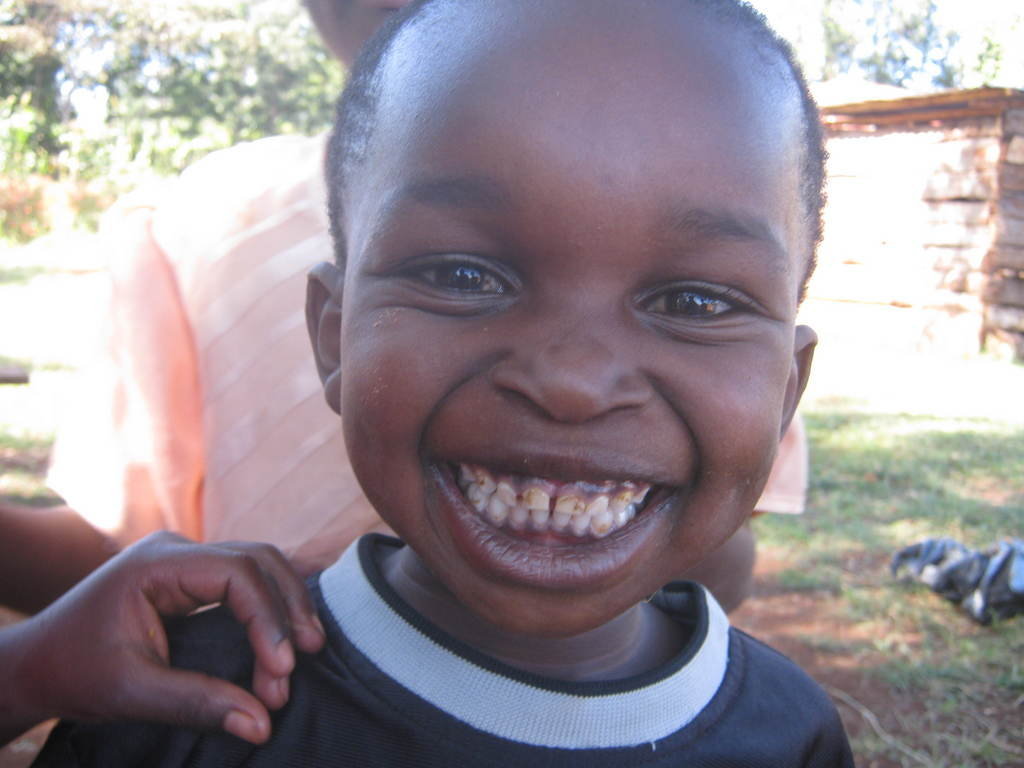 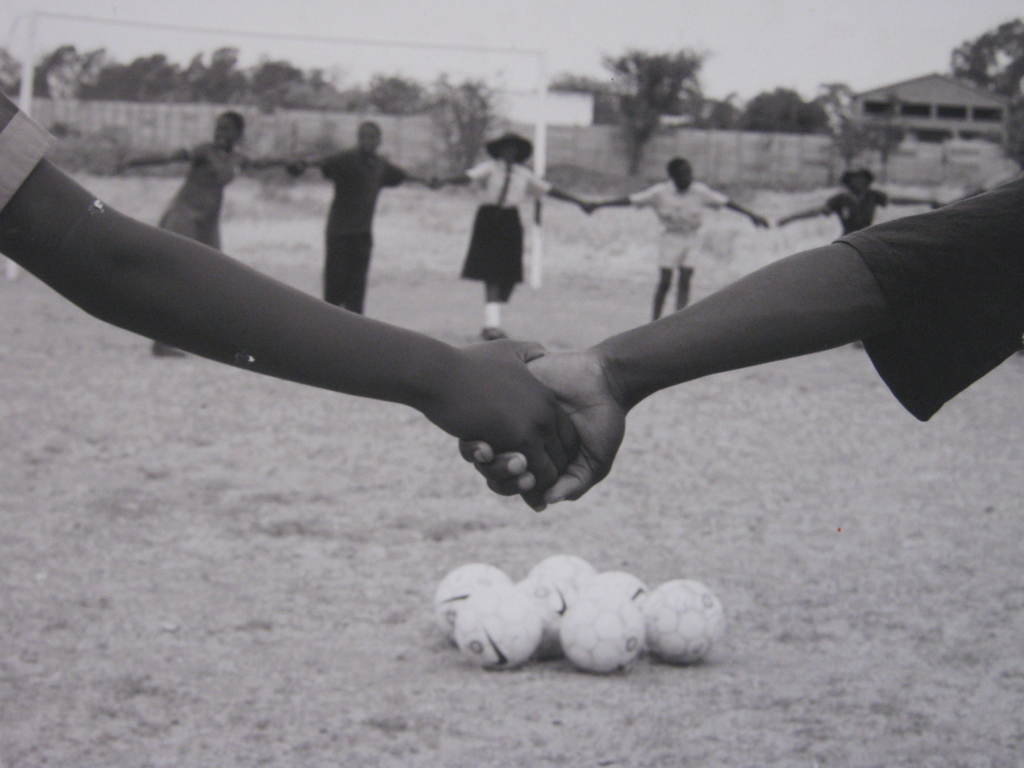 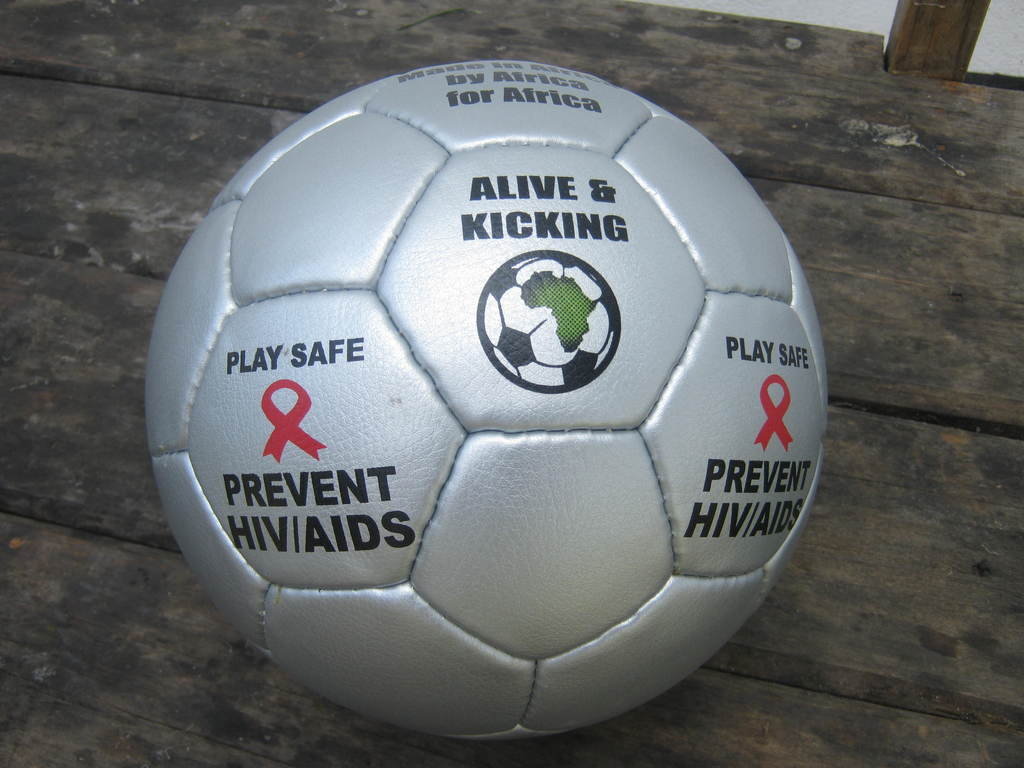 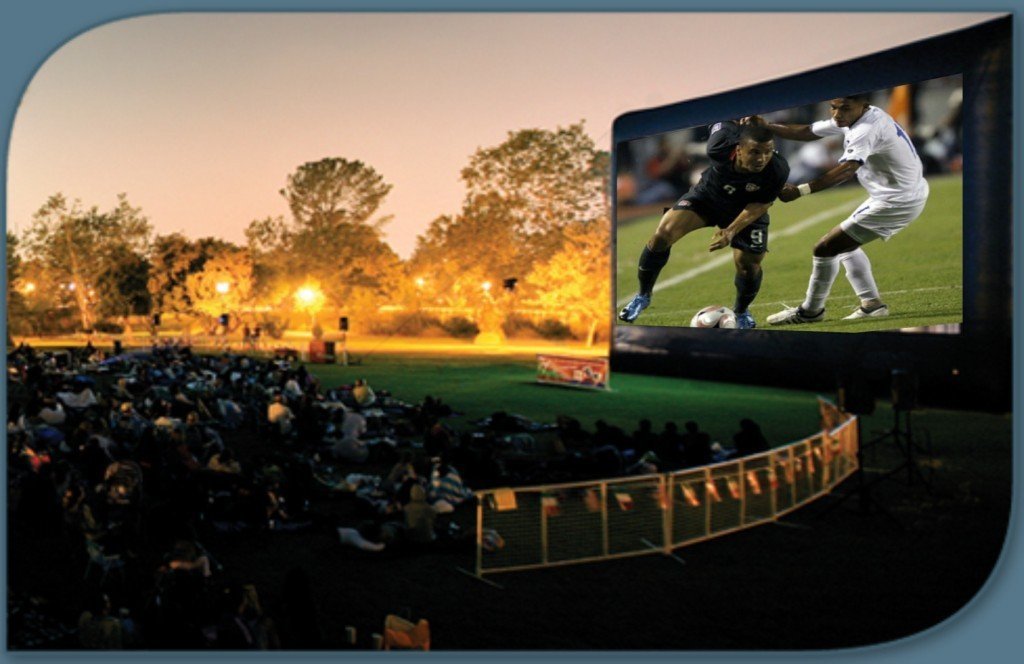 By Joseph Agoada - Chairman of the Board, Two Wheeled Foundation 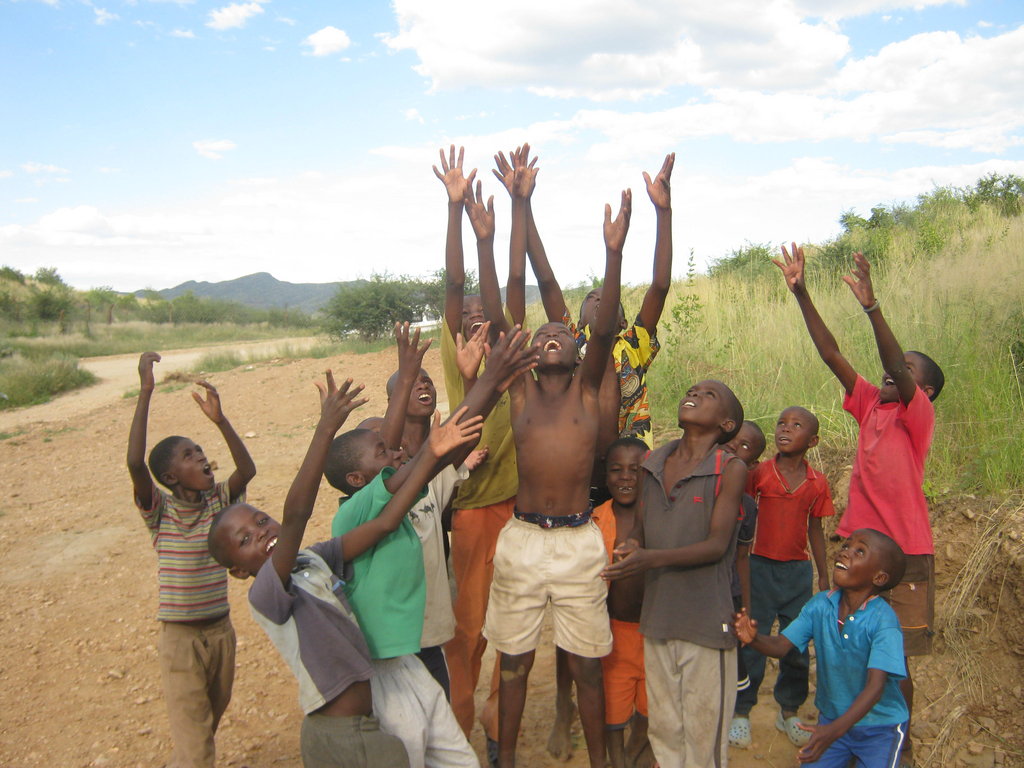 Kids in Namibia enjoying games with their Football

During the 2010 FIFA World Cup, the first ever hosted on African soil, we set out to do something memorable for vulnerable youths in East and South Africa. We hoped to share the global event with hard to reach young people, and create an engaging, educational, and innovative experience around community viewings of the World Cup matches.

Through the Kampala 2 Cape Town project, which later also evolved into World Cup in My Village, we did just that, and more. Over 20,000 children who would have not been able to enjoy the games watched on 20ft tall inflatable screens. Thousands of their elders also took part in the screenings and educational activities. An additional 200 young people received media training in radio and video journalism, their enthusiasm was infectious and they gained life-long skills. The smiles of all the young people who participated in the pilot is something I’ll never forget.

What I personally learned from the initiative and discussions with Two Wheeled Foundation Treasurer, Lucy Wanjiru Njagi of Kenya, is that we can now look to expand the mission of TWF and see beyond the launch a broader scope of our initiatives. I invite you to keep in touch and reach out with feedback and ideas.

Check our our new campaign to empower 500 bicycle innovators in East Africa: 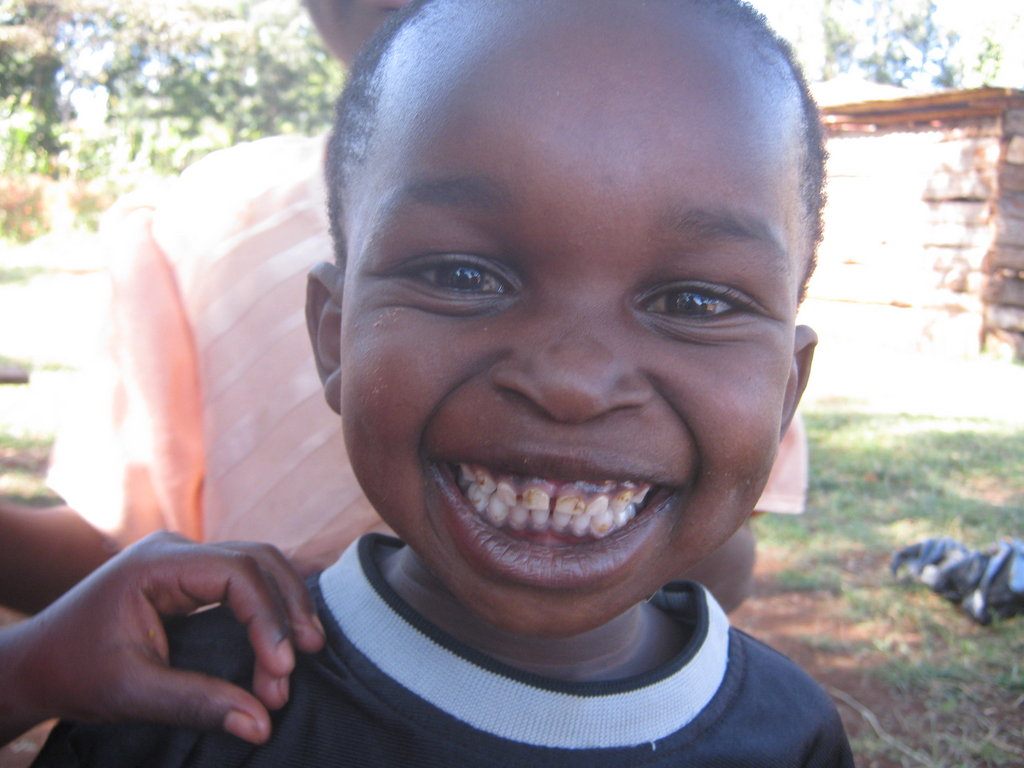 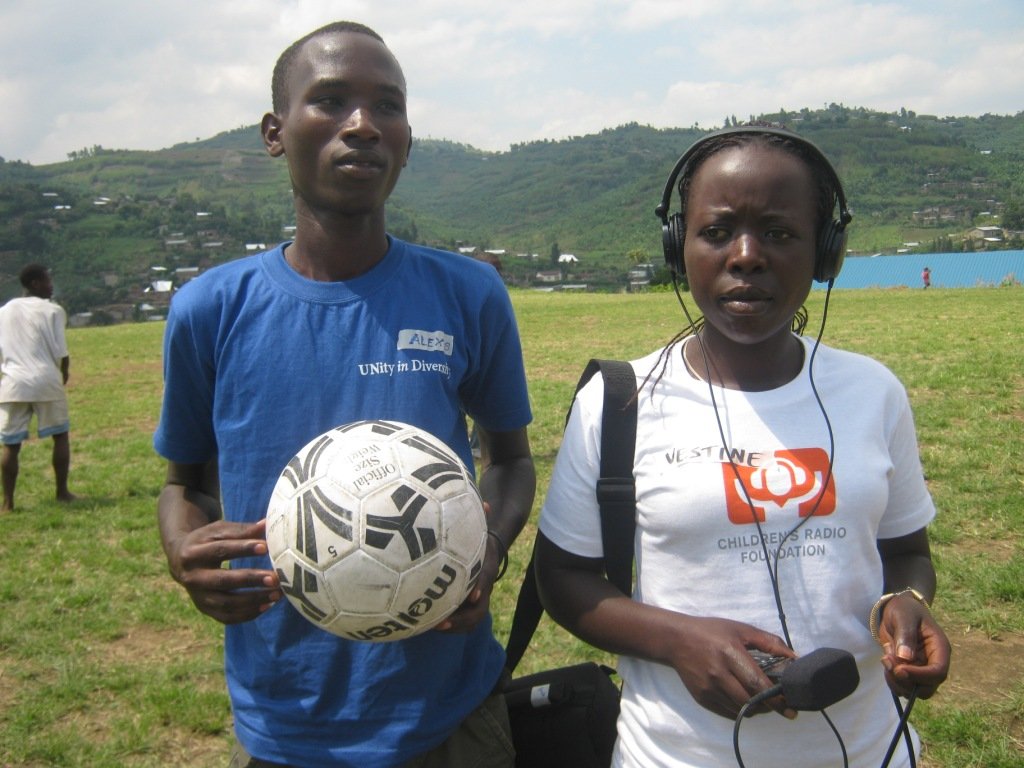 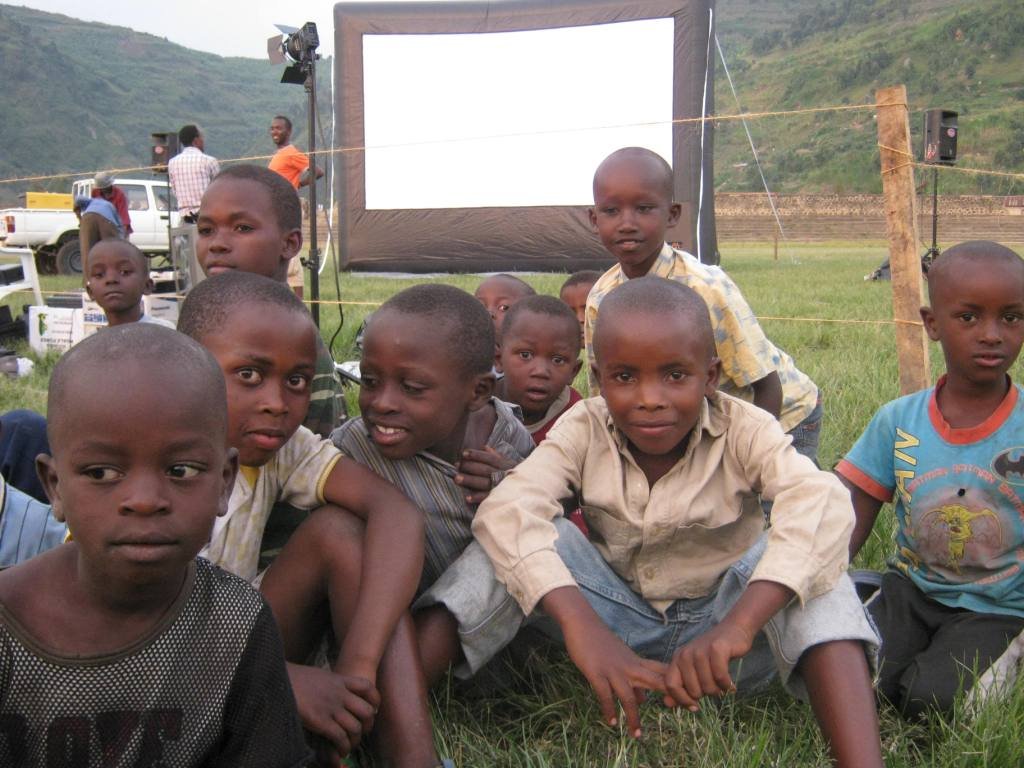 The FIFA World Cup 2010 in South Africa will always be a memorable event for many children of Rubavu district formerly known as Gisenyi in the North West of Rwanda. They watched three quarters of the matches live on a giant inflatable screen courtesy of UNICEF NY and One UN Rwanda.

The majority of children (70%) had no access to any other means of watching the World Cup matches. But there is a good number of others who simply enjoyed the atmosphere of watching the matches and the other video messages that were being screened.

The local community host was very well suited for the challenge of showing a game in the rural area. They had facilities, motivation and passion to entertain the audience between and before the matches. The audience enjoyed dances and contemporary music performances and this added to the entertainment and educational value of the whole occasion. This could have been even better if there was a way of involving national music and comedy stars to perform and pass on the messages live.

Football remains the most popular game here and anything to do with it is sure to draw huge crowds especially of the young. And they are very aware of football news that all international, regional and national tournaments are followed closely. For example the European tournaments that are currently beginning are already generating much excitement with the youth.

Videos are always popular with the youth and all messages will be readily consumed if well packaged and in Kinyarwanda and especially if they have a funny angle to them. People, the youth in Rwanda are so starved of laughter that they cling to anything remotely funny in a video. And for that matter, live stand-up comedy can definitely be used for messaging.

A lot can be done in terms of getting the people’s attention so long as it is well organized and information based. There is always a huge number of curious onlookers who are bored, especially in late afternoons when they are free and have finished work on their land. The total absence of any entertainment in the rural areas guarantees a good audience of both young and old in the rural areas especially if it is based around an inflatable screen and a loudspeaker. People are known to immensely enjoy Western made movies so long as they are dubbed over in Kinyarwanda. The young men who do the dubbing hardly understand English themselves. So they fabricate stories around these movies just to entertain the masses. This is a booming business. They are called “the explained’ movies.

The next World Cup feels distant to most Rwandan kids. But this is only because they know they have enough football in between. There is the CAN, UEFA, the British, Spanish, Italian and other Italian leagues. However all these are only accessible to those young people leaving in townships where there is electricity and satellite tv. On the whole about 1% of the Rwandan population have access to a television set and about 10% have access to electricity.

So a huge number of young people can still benefit from entertainment and education if they are reached.

Across Africa, Education and Enjoyment around WC 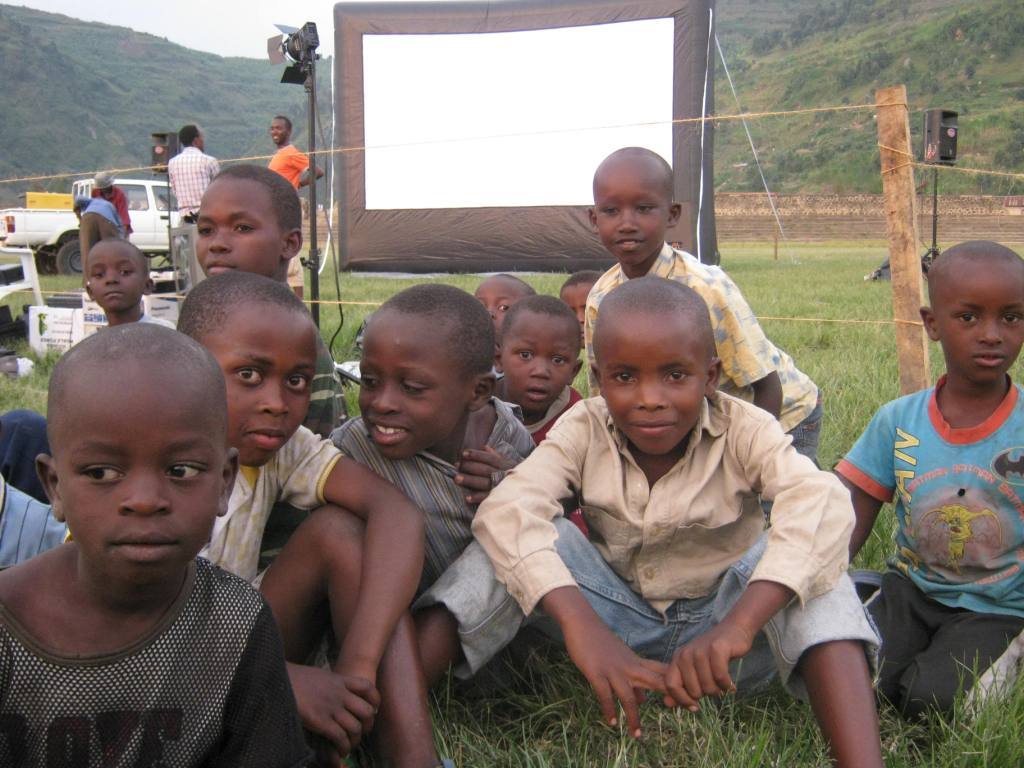 Kids show up hours before matches are shown!

In Rwanda, Kenya, Uganda and Zambia kids who otherwise would not have experienced the first World Cup in Africa are getting the experience of education and enjoyment around large open air cinema screens…and now its all happening simultaneously…

Between World Cup matches we mobilized a massive crowd to go around Kyebando and clean up all the plastic and trash that is everywhere. We had over 150 people including students, community workers, local politicians, street kids, youth elders… everyone. We gathered 30 rice sacks of trash. Things don’t always go according to plan in Africa, but this was such a success. When trying to talk to people about plastic it often feels like they don’t see the big deal, but today with a united force we did an amazing amount of work to clean but even more to raise consciousness. We named the street the center is on, put in signs that say litter free zone, imagine a better future.

On any given day over the last two weeks in June, hundreds and sometimes thousands of kids have gathered at Umaganda Stadium in the village of Gisenyi , Rwanda for something special. Thanks to support from UNIECF New York and One UN in Rwanda, the kids of Gisenyi have been huddled together into the chilly night watching their favorite football stars on the biggest stage, the FIFA World Cup. Before matches they are being entertained and educated be youth theatre and dance performances by Vision Jeunesse Nouvelle, a local youth community development organization. At halftime of matches informational videos, public service announcements and youth radio stories are playing to the crowds.

Tuyisenge Innocent 15, has been to every single game at the stadium. He lives in a tidy old house that belongs to his grand parents. He lives with his older sister who studies accountancy and a brother who rides a moped as a taxi. Both parents have died and Innocent dreams of becoming an electrician. He has started coming extra early to try learn how the big screen system works. He says that he will never forget the matches especially because it lasted a whole month long.

It’s incredible how much the community has taken ownership over the project. Their commitment to get the screen up and running was remarkable. From Friday morning until Saturday evening they were working hard to get the screen going. So many complicated pieces had to be placed in exact order from connecting the satellite dish and specific wires to ensuring that our DSTV subscriber had enabled our subscription from Kisumu, which is 2 hours away.

You should have seen the crowd on Saturday night. The screen was finally working just in time for the England vs. USA match. I was standing there as they were reciting the Star Spangled Banner, observing a crowd of 200 children and adults cheering from the rural village of Oyugis, Kenya. It is moments like this when you see the fruits of community-based work that make international development such an inspiring profession. Of course there are daily challenges to the project; but ones that when overcome, allow for sustainability. The community has jointly been working through the process, which has given them ownership over their work.

The mission of Kampala 2 Cape Town Kenya is: “Female Empowerment Through Football,” with a vision of improving the lives of the girls in Oyugis through the post-world cup network in Africa.

We were at the school at 4.30pm to start setting up. Sports in Action guys came with balls with which they engaged the kids in play with. Both boys and girls played the ball on the same ground and it was amazing to see the crowd of kids run from one goal post to the other and back again as they chased the ball. They even had two goal keepers as there were around 50 kids playing at the same time. At 6.30 when it got dark, we started screening “Sugar” a movie with HIV messages. It was a crowd puller.

The game between Ghana and Germany started at 8.30pm and went on up to 10.15pm. The whole time the game played there was silence apart from when there were attempts on goal or when there was a goal scored. The crowd was really carried away by the game. After the game, the crowd wanted more and we had to shut down everything for them to leave. They also wanted us to go back to the same venue the next day, but we informed them that we have a program we were following and so the next day we would be in Mandanga basic school.

The place was fully packed with kids and adults, the estimated number I can say is 1200 people with 60% of them being kids. The school had informed the kids of the activity the previous day and had invited them to come with their parents. The kids arrived earlier than the adults so they had the privilege of having the front area or front “seats”. Most of them sat down on the sand and you could tell they were having a great time. 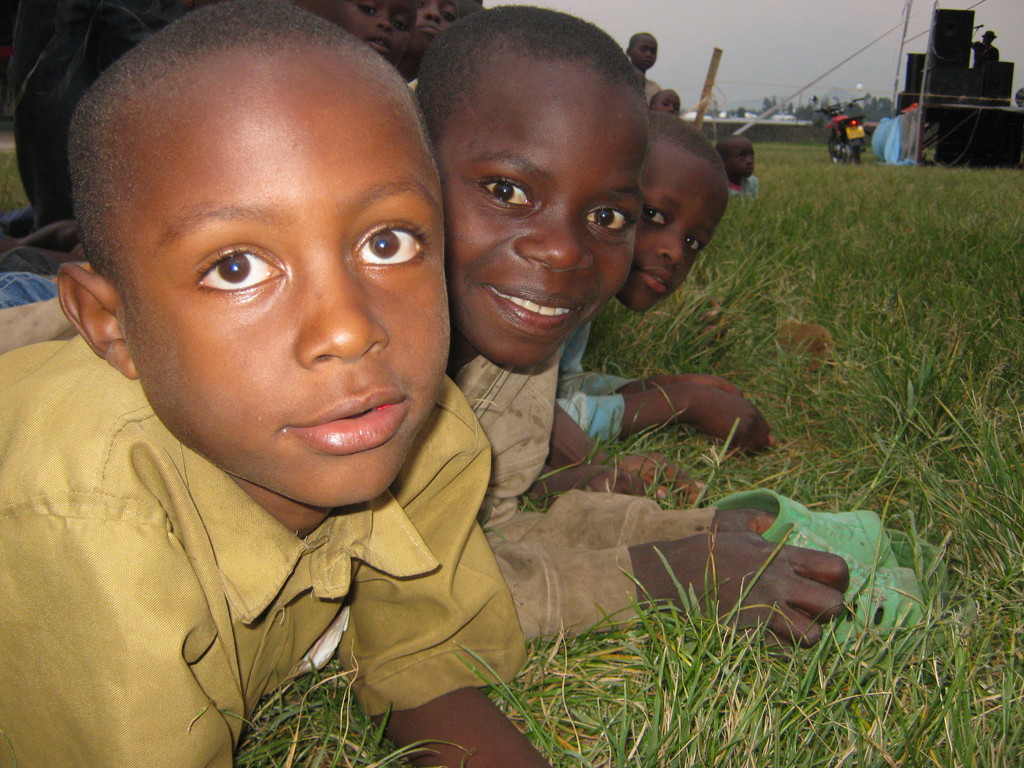 Best seats in the house! 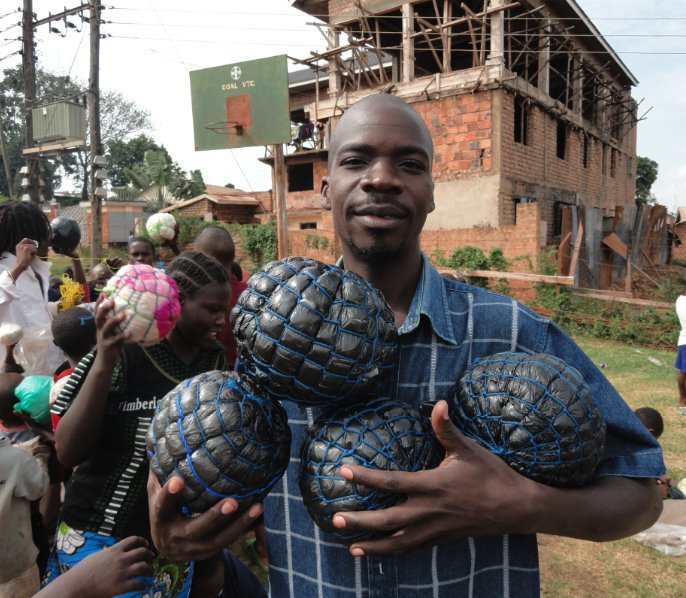 Soccer Balls made from trash collected @ Half Time 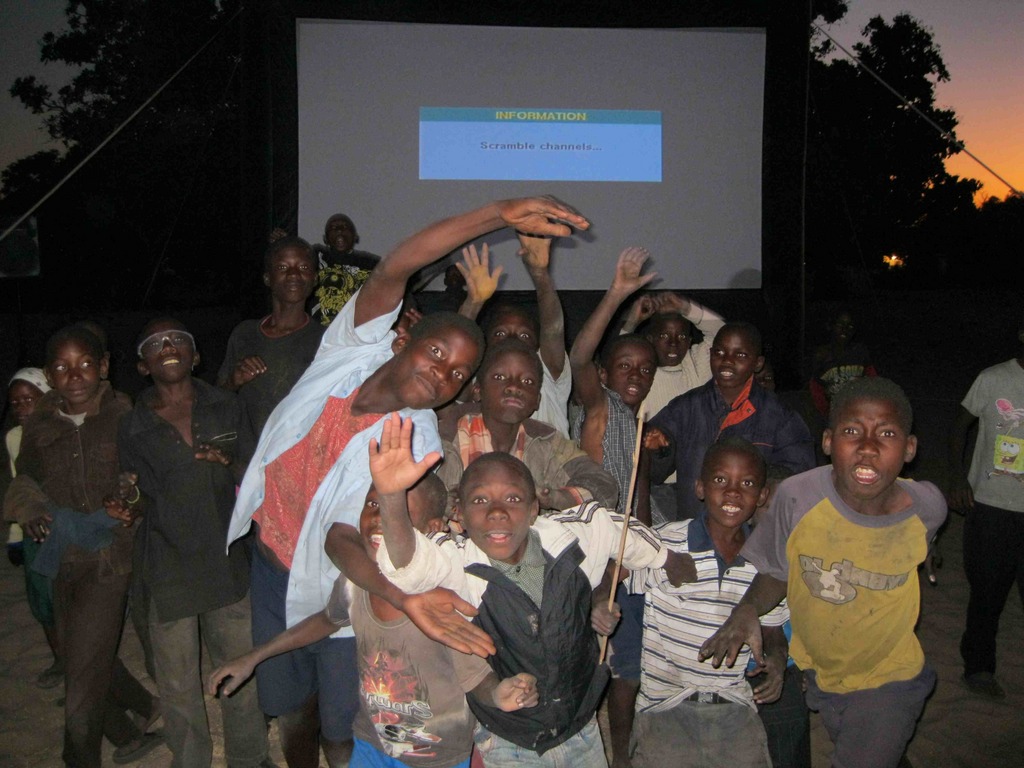 Find another project in Zambia or in Sport that needs your help.
Find a Project

GlobalGiving
Guarantee
Donate https://www.globalgiving.org/dy/cart/view/gg.html?cmd=addItem&projid=4833&rf=microdata&frequency=ONCE&amount=25
Please Note
WARNING: Javascript is currently disabled or is not available in your browser. GlobalGiving makes extensive use of Javascript and will not function properly with Javascript disabled. Please enable Javascript and refresh this page.