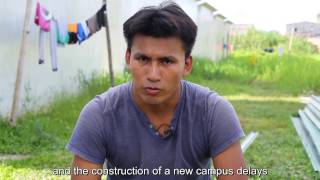 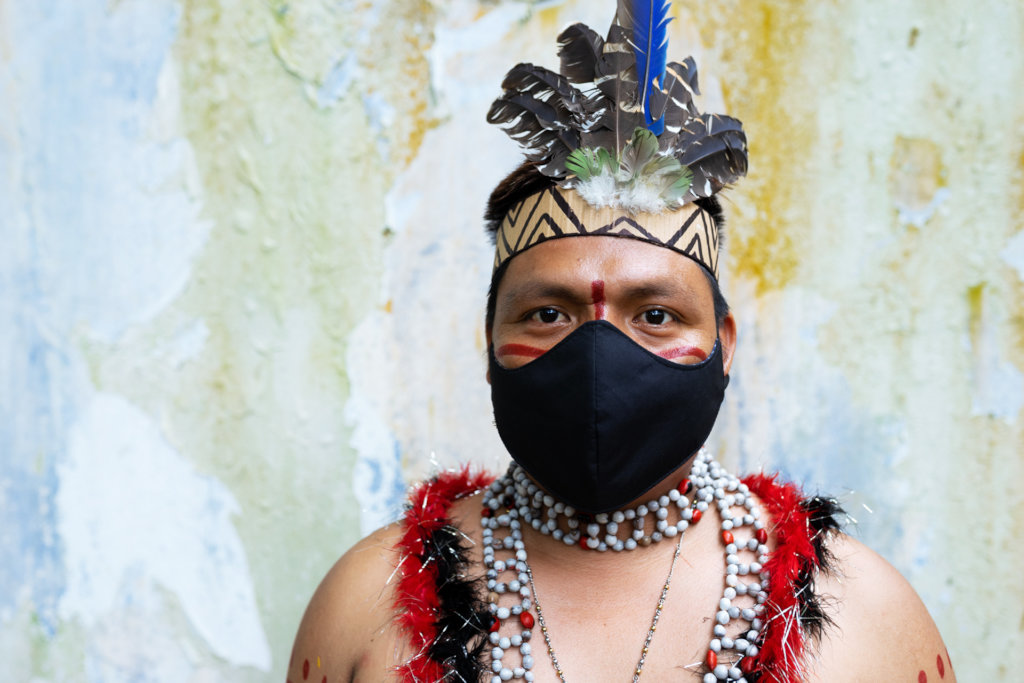 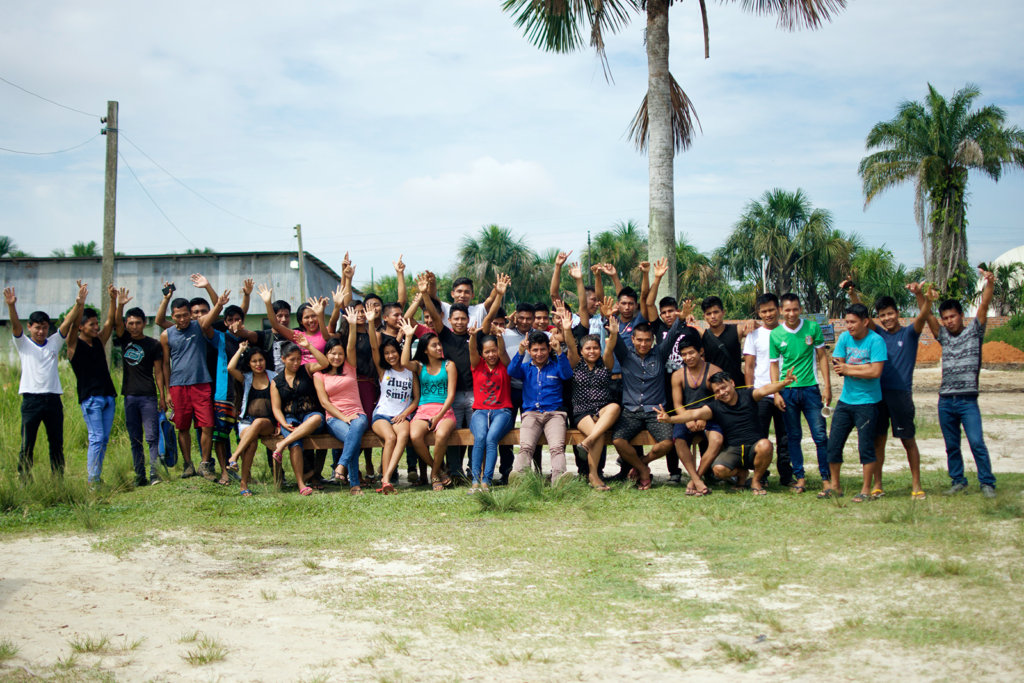 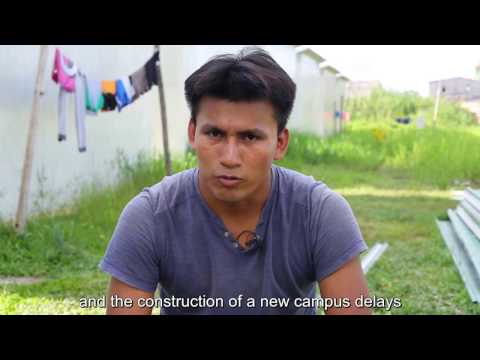 One Step Closer To The Indigenous Student Centre Becoming Reality

Great things are on the horizon for 2018. Last time we wrote to you, we shared with you the indigenous students’ objective to secure the land for the student centre, which local authorities promised many years ago. We are excited to tell you that following the students’ strong organizing and sustained efforts, the land has now officially been handed over! This is a great victory for the Peruvian Amazon’s indigenous youth.

It follows a whirlwind past two months. After months of lobbying and protesting for the land at the regional government, the situation reached a boiling point when students received notification they would be displaced from their temporary base to yet another temporary location in Iquitos. In the 15-year history of OEPIAP, the indigenous student organization representing over 120 indigenous youth from 15 Amazonian peoples, this is sadly nothing new. “Since 2012, we have been fighting for the implementation of a student centre, which will dignify indigenous students”, explains President of OEPIAP, Edgar Peas Garcia, referring to an agreement signed with the regional government and university years ago, in which authorities pledged to respect the youth’s right to adequate living conditions and intercultural education. Time and time again, this indigenous youth has endured repeated relocations and unequal opportunities. Is that the price to pay for having left their remote communities to come to Iquitos in order to pursue their dream of higher education and becoming professionals? It shouldn’t be. But a lack of political will from the part of the authorities continues to impair access to higher education for the indigenous youth.

Nevertheless, the students’ remarkable perseverance has finally resulted in an important advance, with the regional government officially granting land to the organization. “When people organize, things can be achieved. This is our strength”, says OEPIAP´s Vice-President Elisvan Greffa. Although much remains to still be clarified with local and national authorities on the subject of funding, building is set to start up in 2018 using your donations to this campaign and a fund from The Liechtenstein Development Service. We will be accompanying the students in the exciting design and implementation process to build this centre, which will guarantee adequate living and studying conditions for at least 150 indigenous youth. “As indigenous students, our aim is to prepare ourselves academically and thus contribute to our people, to our society, to contribute to the change that we want and that we are all looking for”, explains Elisvan Greffa.

Your contributions and support to this campaign continue to be an invaluable part of this process to improve access to higher education for Peru’s Amazonian indigenous students. Thanks to your donations, we also recently launched the pilot project “Conduce Tus Sueños” (“Drive Your Dreams”), an initiative that seeks to promote the use of bicycles as alternative and ecological transportation for the indigenous youth. Part of building the student centre means finding solutions to the challenges which the youth face while studying in the city: a key difficulty has always been the lack of economic resources to meet their local transportation costs. Many of the students walk several hours daily to reach their educational institutions.

With smiles all around, the launch event saw indigenous youth cycling at the front of the 30-strong convoy joined by three local cycling collectives who regularly gather to cycle around the motorbike-filled streets of Iquitos. The initially procured 10 bicycles are now being stored and managed by the students for their travel. “Everyone enjoys the bicycles and using them as transport”, affirms Orfelinda, an Awajun indigenous student from the Amazonas region. The indigenous students, in alliance with the local cycling collectives, also hope that the project will lead as an example for ecological alternatives and better living in the bustling city of Iquitos. Read more about the initiative here.

The road ahead is never easy. Building strategic alliances, both indigenous and non-indigenous, is crucial for the students’ empowerment and the building of the student centre. Amongst the alliances in motion, an exciting creative collaboration with local indigenous media Radio Ucamara has just been initiated - stay tuned for the fruits of this work in an upcoming new music video featuring 9 indigenous youth from OEPIAP and 7 indigenous languages - a beautiful incarnation of the incredible cultural diversity and richness of indigenous peoples in the Peruvian Amazon.

With Gratitude & Love during this holiday season, 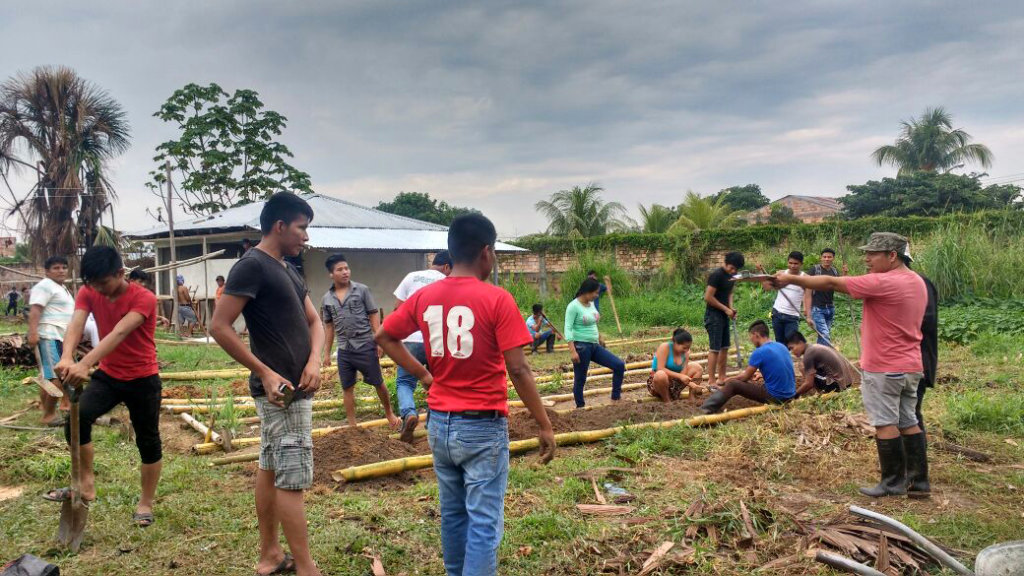 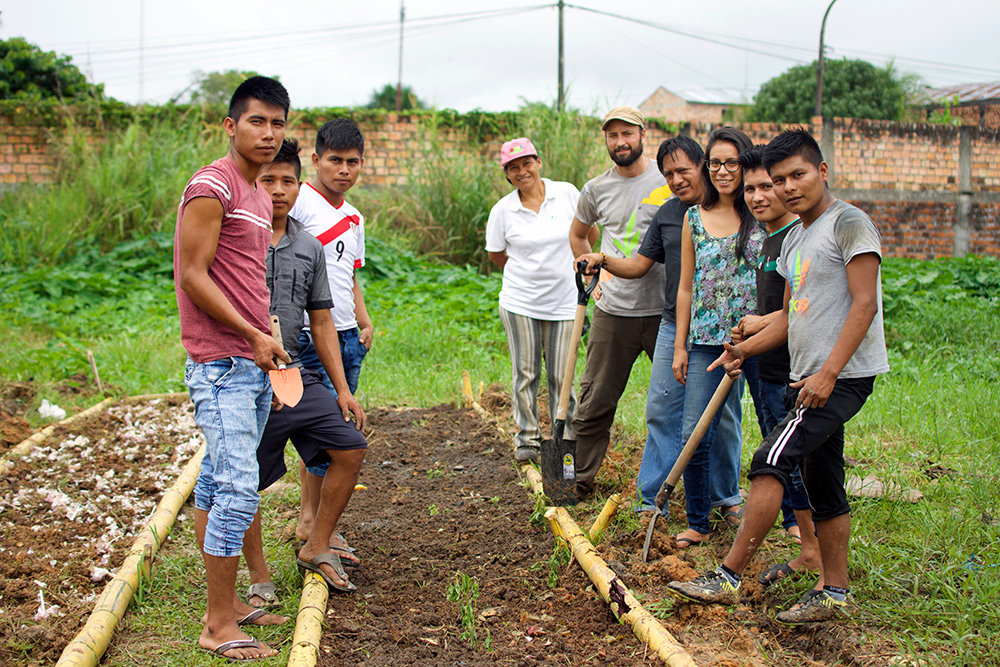 Thanks to the help of each and everyone of you who believe that indigenous students should have equal opportunities, exciting things have been happening on the ground for indigenous student organization OEPIAP, which represents over 120 indigenous youth from 15 Amazonian peoples.

With negotiations with the regional government for land titling to build a permanent student centre still under way, our immediate aim is to improve the students’ living and working conditions in the short and medium term. In the past months, we have been working to strengthen OEPIAP’s leadership through technical support, logistics and accompaniment for political lobbying. These efforts, made possible thanks to your donation, have already contributed to new additions being implemented at the temporary student centre where the students reside under difficult conditions: a new maloca (traditional Amazonian community house) is under construction to serve as a proper study space with access to computers. New temporary bungalows are being built as accommodation. The kitchen and dining maloca are also being improved.

Loreto's Regional Governor has promised that the land for the permanent student centre will soon be handed over, yet it will take time and planning before anything can be built there. We are optimistic about the outcome as we and the students keep on the pressure for this pledge to be fulfilled, developing new strategies and alliances to this end along the way.

Our Chaikuni Institute Permaculture staff also offered its first Permaculture workshop on site for the indigenous students, during which we inaugurated unique urban gardens with edible and medicinal plants such as papaya, ginger, basil and lemongrass to improve their diet and health.

“I like to support and help”, says Tito, one of the five indigenous students working to set up the gardens. “I like to sow plants and make them grow, to see their fruit and from this we will get a good product to consume or to sell.” The next steps for the students’ garden will be to plant more varieties, implement a compost system and to find a better solution for the waste water from the kitchen.

None of this could have been possible without the support of special individuals and foundations who provide the funds to help improve the everyday living and studying conditions of indigenous youth and to build this much needed permanent student centre, which will pave the way towards a truly intercultural education and society in Loreto with Amazonian indigenous youth as key actors. We have made a beautiful start to this project thanks to your confidence in our work.

We'll keep you updated as this project progresses and as we continue to run our campaign for the full goal of $24,000. 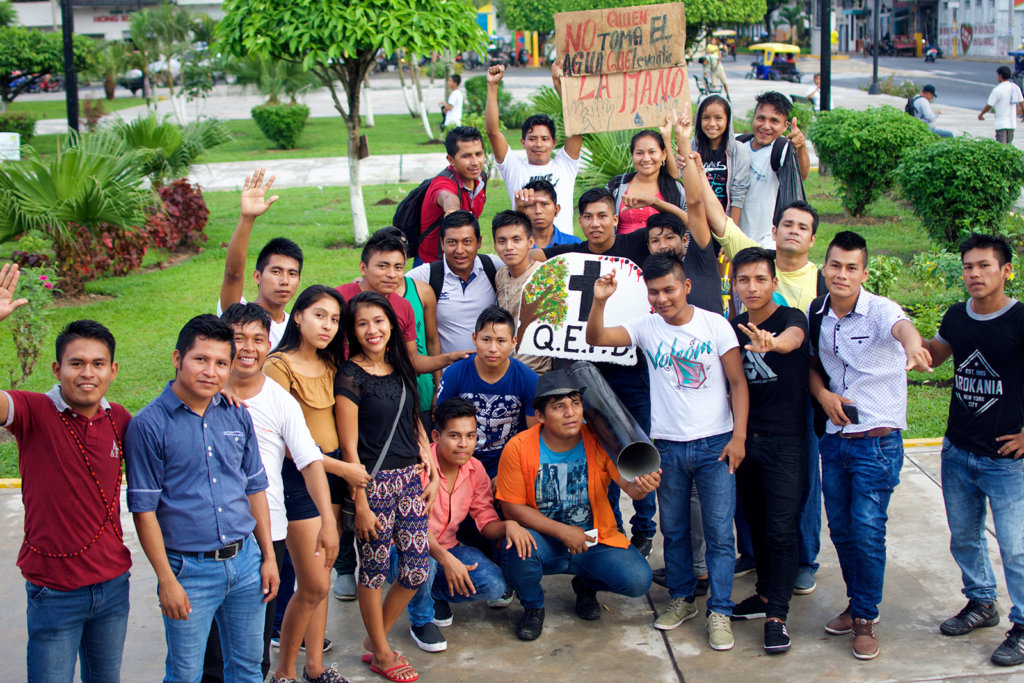 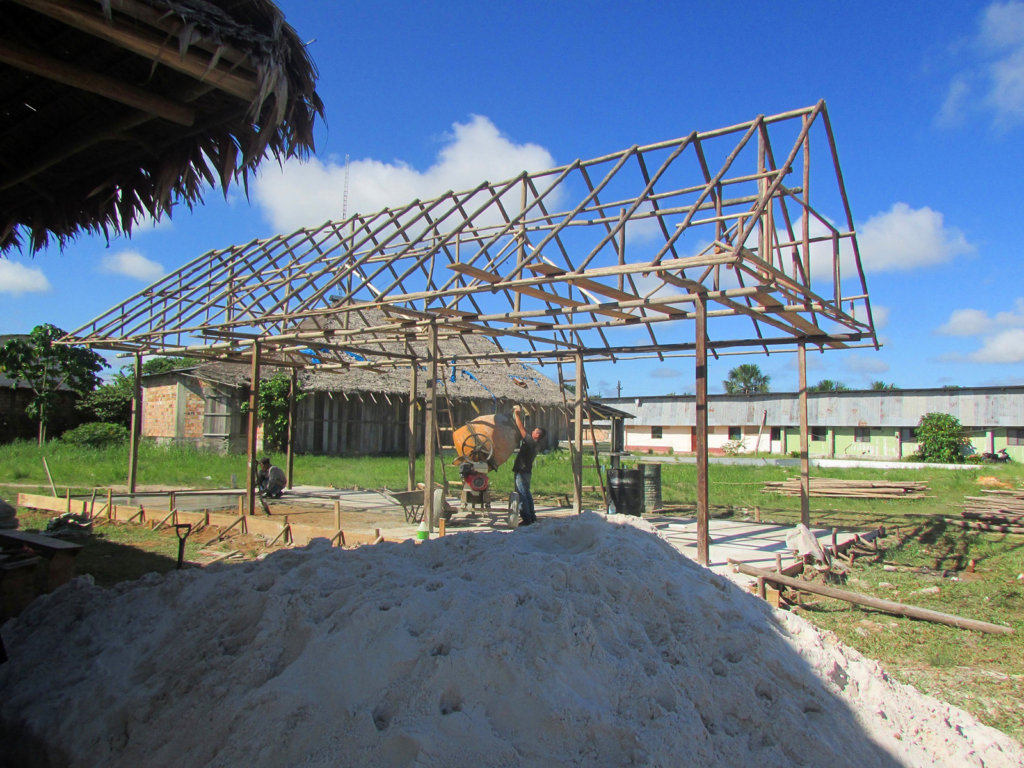 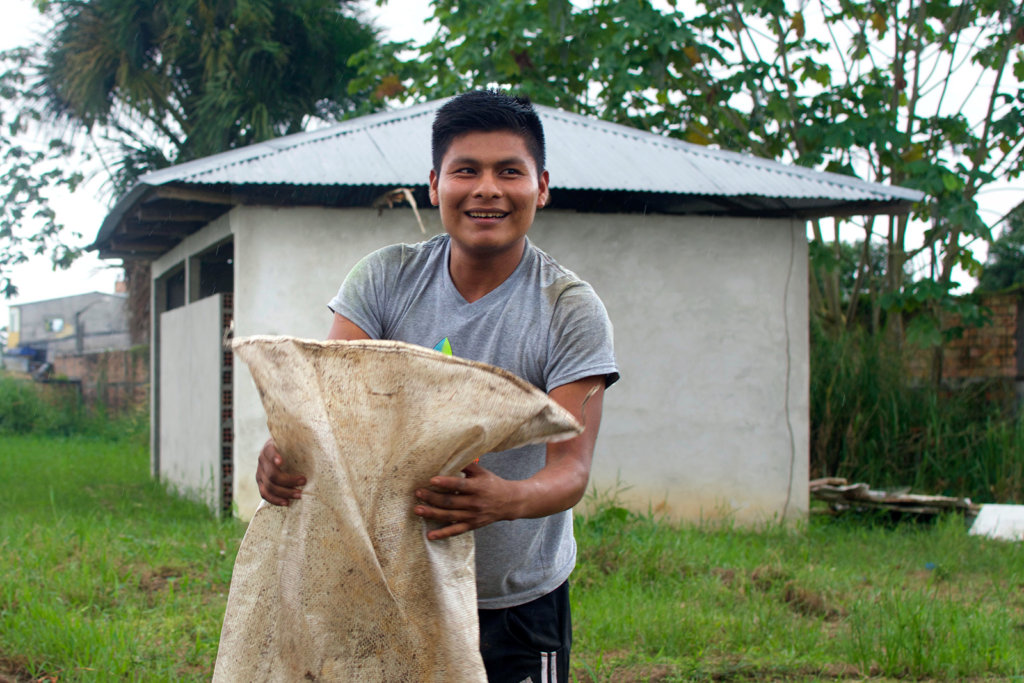 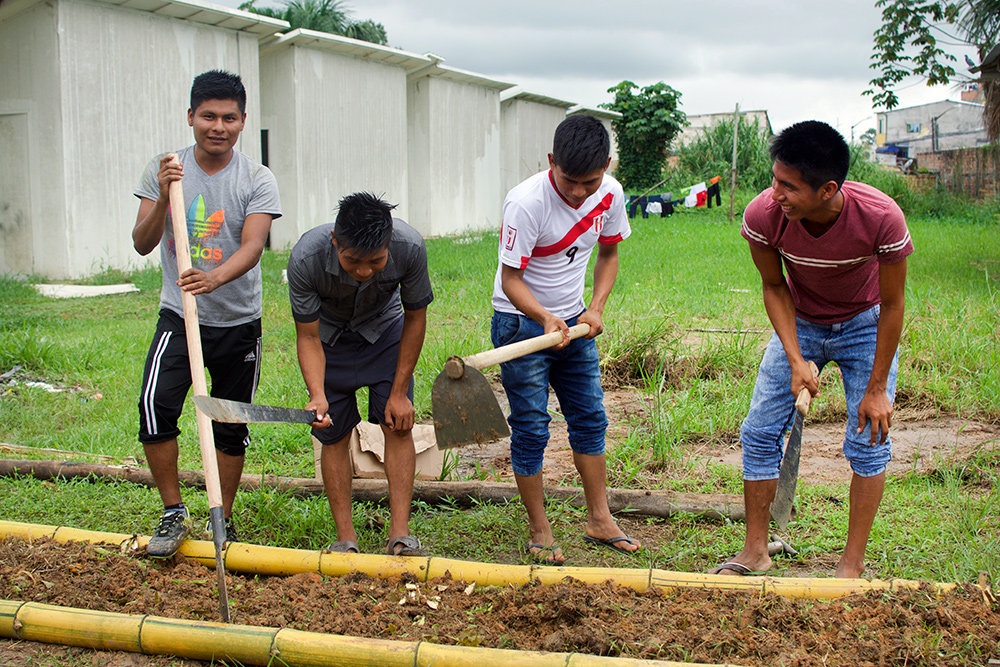