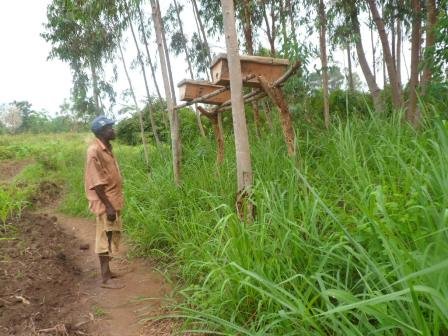 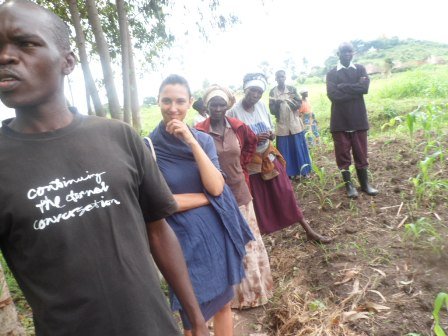 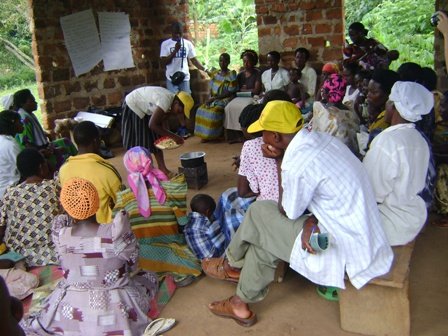 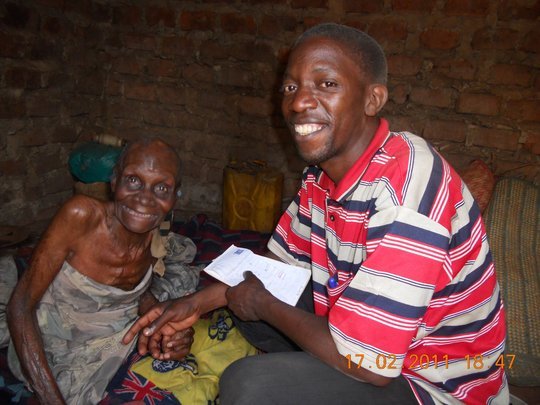 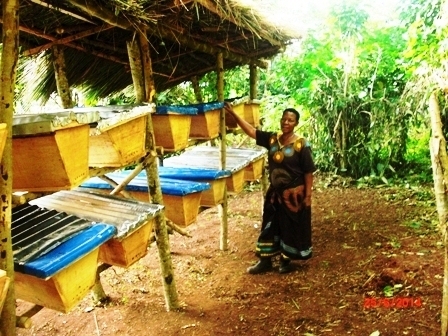 Trainer at a bee farm

Empowerment  And Skills Development In Beekeeping For Vulnerable People of Rural Mukono - to empower rural vulnerable people with knowledge and skills in beekeeping, as a way of addressing rural poverty and general health issues and to provide them with a set of basic tools and support  to help them get off the poverty trap.

The fundamental objectives of this project are threefold:

EACO interventions focus on poverty reduction and address the effects of HIV/AIDS. A majority of vulnerable women, particularly widows and those living with HIV/AIDS, as well as vulnerable children, youth, and the elderly in this area, located at Ggulu A, have limited to no opportunities to participate in decisions concerning their wellbeing because of their vulnerability (usually poverty and gender) or their age. As a result of the lack of sources of income, they are unable to meet their most basic needs.

A lack of professional skills is a leading obstacle to development in rural Mukono Communities and it hinders the population from actively improving their lives sustainably, especially at community levels. The overall agricultural productivity development rate in Mukono District is still very low and varies depending on the Sub-county geographical locations. The average poverty rate in the District is at 40% whereby the discrepancy of poverty rates between the two axes, abject poverty is commonly experienced in the rural areas and relative poverty in urban areas and thus making poverty a Social problem which derives its origin or directly linked to low household productive skills and lack of resources for production.

How People Living With HIV/AIDS (PHA); and/or Orphans and Vulnerable Children (OVC) benefit from our project.

50% of the beneficiaries are HIV+ and some of their children too. These will benefit from this program as they are trained in alternative income generation skills that is not too energy intensive, raising their income source. Their nutrition will also improve as they learn to keep bees, hence improved health for the widows, their children and OVCs in this program. The provision for medical care will ensure opportunistic infections are treated early.

This Project is designed to provide education, leadership training, and sustainable income generating opportunities specifically for vulnerable People and their families who are affected by poverty and HIV/AIDS in rural Mukono County by ensuring self-sustainability of EACO beneficiaries and guaranteeing that they are in a position to meet their basic needs (i.e. food, water, shelter) and support their school dues like school fees and medical treatment.

The project's participants will be selected by EACO Officials, from among current EACO beneficiaries in Mukono district.  Participants will be comprised of vulnerable women, particularly widows and those living with HIV/AIDS, as well as vulnerable children, youth, and the elderly. With little to no income who have been affected by poverty and HIV/AIDS. Participants must also express willingness and demonstrate the ability to work.

The project will not provide much of a financial return in the first year, for EACO. But there are some very promising financial opportunities for producers and for EACO in the long run. Considering that current prices for wax are around UGX 10,000 per kilogram, while prices for processed honey are around UGX 7,000 – UGX 15,000 per kilogram, conservatively one can expect 1/3 to half of those values to revert to the producers,. A KTBH beehive can produce up to 20 kilograms of honey and about 10 kilograms of wax per season. If we assume only one producing season per year, we can arrive at a low figure of UGX 75,000 per season per beehive. On the high side we can arrive at a figure of UGX 250,000 per beehive for two seasons of production per year. These are substantial revenue streams for people with other limited sources of income.

The However, as the women, orphans and other vulnerable children grow their IGAs and form into groups later there will be greater financial returns that will go directly to the beneficiaries. They will keep their own finance record books, with knowledge acquired from the entrepreneurship training. Together with pride micro finance, beneficiaries will have continued support in the second year as they manage their financial records as part of their micro finance group requirement.

Steps been taken so far on the project

Also EACO has designed the proposed project and, as such, a budget and project implementation timetable has been developed (attached).  Additionally, as mentioned above EACO has previously contracted to conduct smaller-scale versions of both the IGA/Entrepreneurship Training Workshop (Activity 1) and IGA Assessment, Startup, and Technical Implementation Assistance (Activity 2).  Thus, EACO has a concrete idea from this initial successful as to how the project will function and how the organization will work.  EACO hopes to build upon this foundation to implement an expanded version of the project, which will include assistance to many more vulnerable widows and their dependents as well as a more robust range of topics covered and start-up supplies provided, increasing the likelihood and expediency of successful income generation.

The overall timetable for the project was:

Please refer to the detailed project timetable provided in the attached documents. .

This Project is designed to provide education, leadership training, and sustainable income generating opportunities specifically for vulnerable People and their families who are affected by poverty and HIV/AIDS in rural Mukono County by ensuring self-sustainability of EACO beneficiaries and guaranteeing that they are in a position to meet their basic needs (i.e. food, water, shelter) and support their school dues like school fees and medical treatment. Thus, by definition, the successful project outcome is that participants are able to carry on the activities without further assistance.

community contribution towards the project

The community has been contributing both the venue for the 5-day IGA and Entrepreneurship Training Workshop and the labor required for construction of necessary IGA structures.

EACO is currently helping to develop an IGA, and  participants have contributed the labor necessary to implement this project. 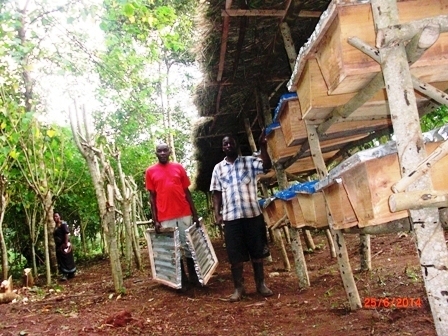 Shadrak and David at the site Find another project in Uganda or in Gender Equality that needs your help.
Find a Project

GlobalGiving
Guarantee
Donate https://www.globalgiving.org/dy/cart/view/gg.html?cmd=addItem&projid=10926&rf=microdata&frequency=ONCE&amount=25
Please Note
WARNING: Javascript is currently disabled or is not available in your browser. GlobalGiving makes extensive use of Javascript and will not function properly with Javascript disabled. Please enable Javascript and refresh this page.