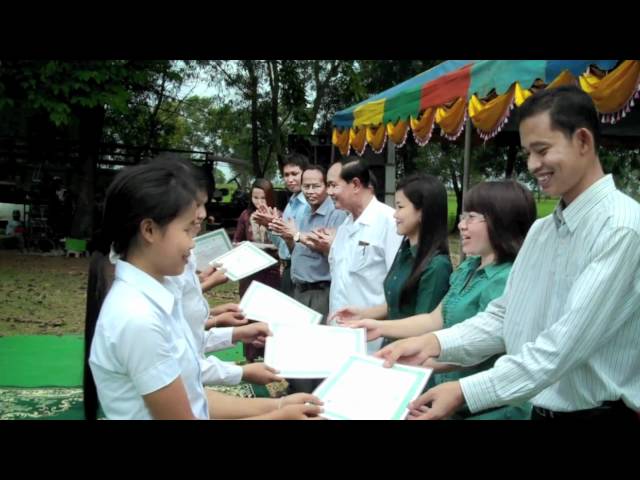 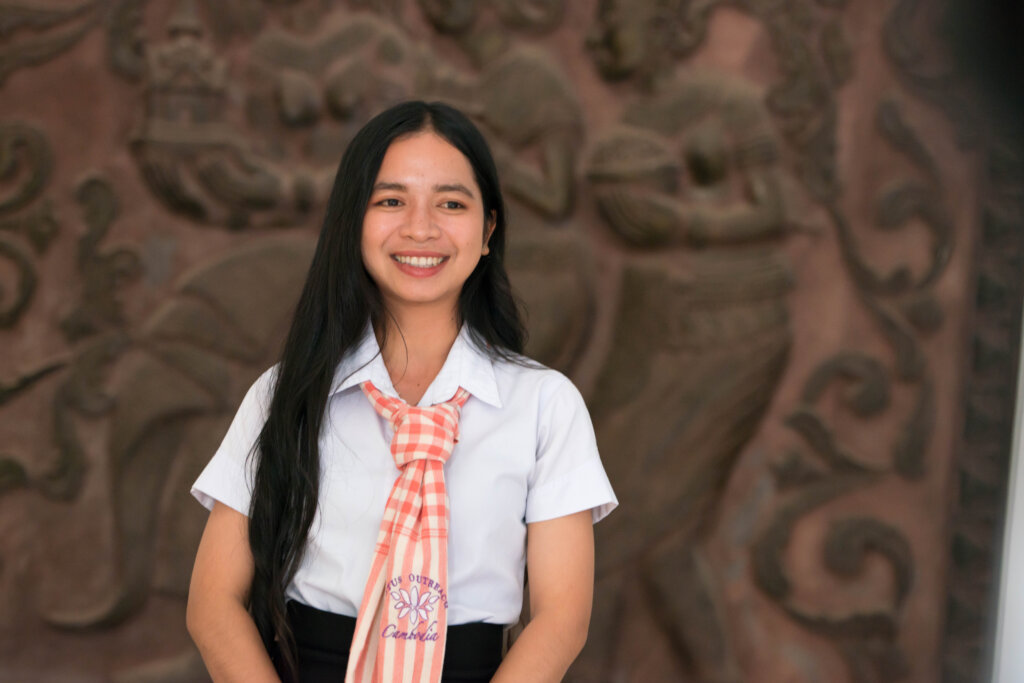 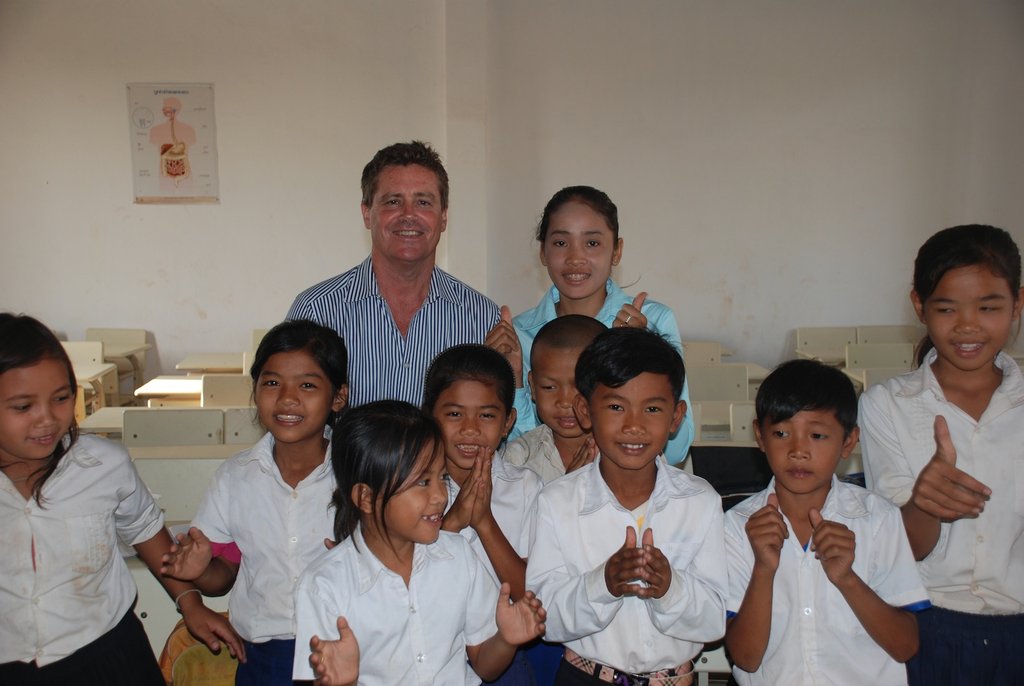 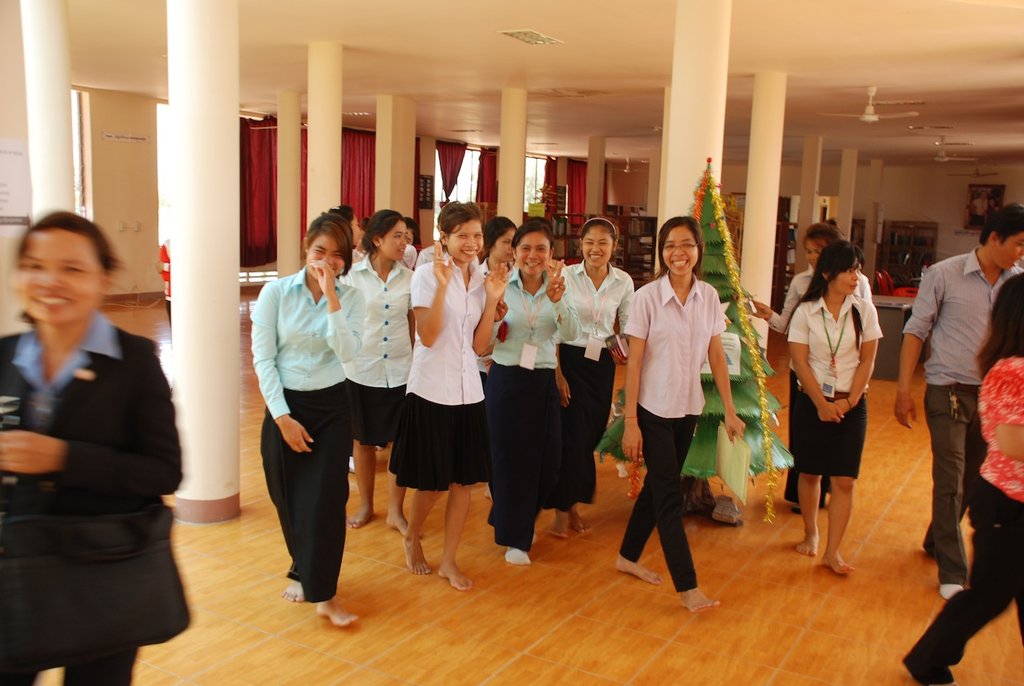 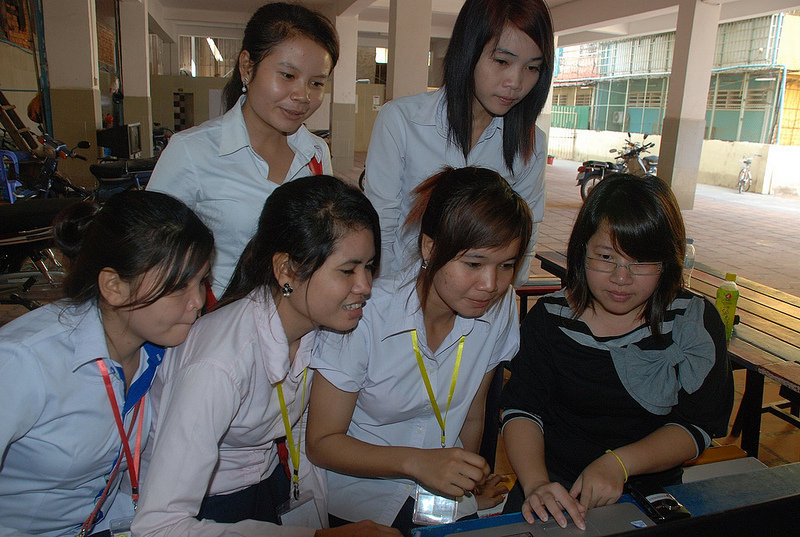 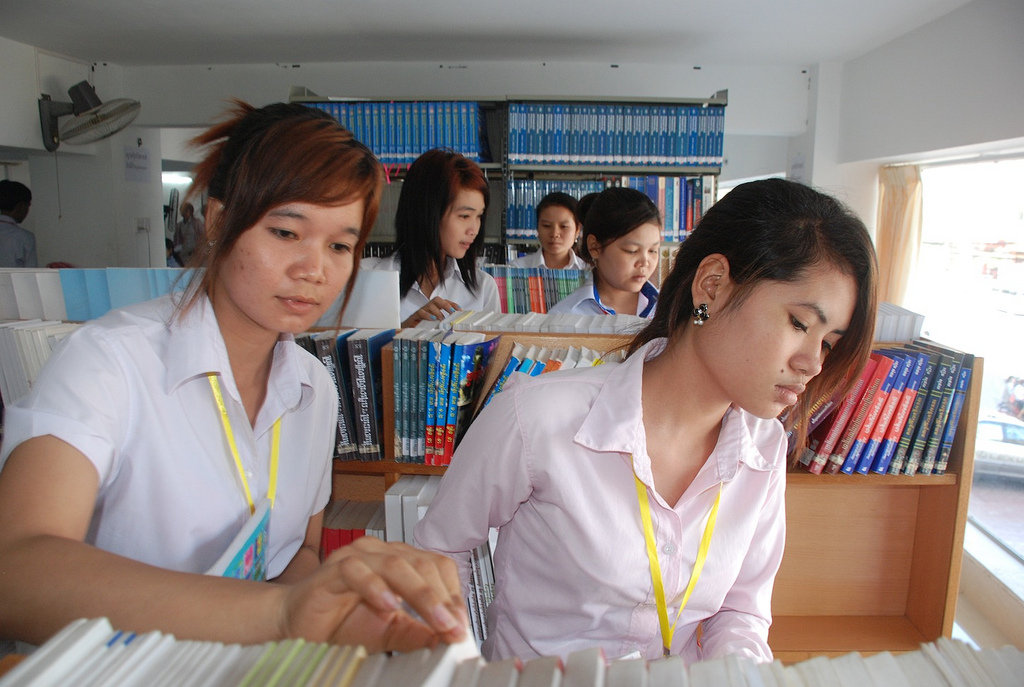 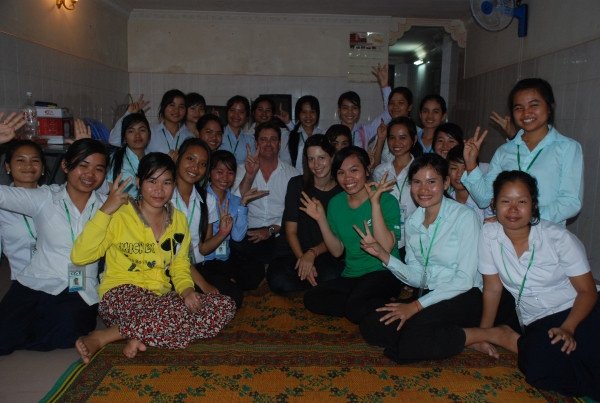 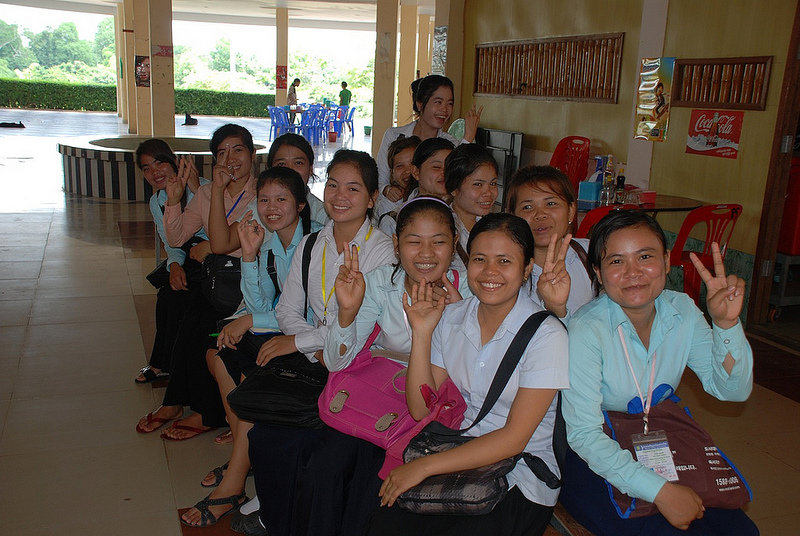 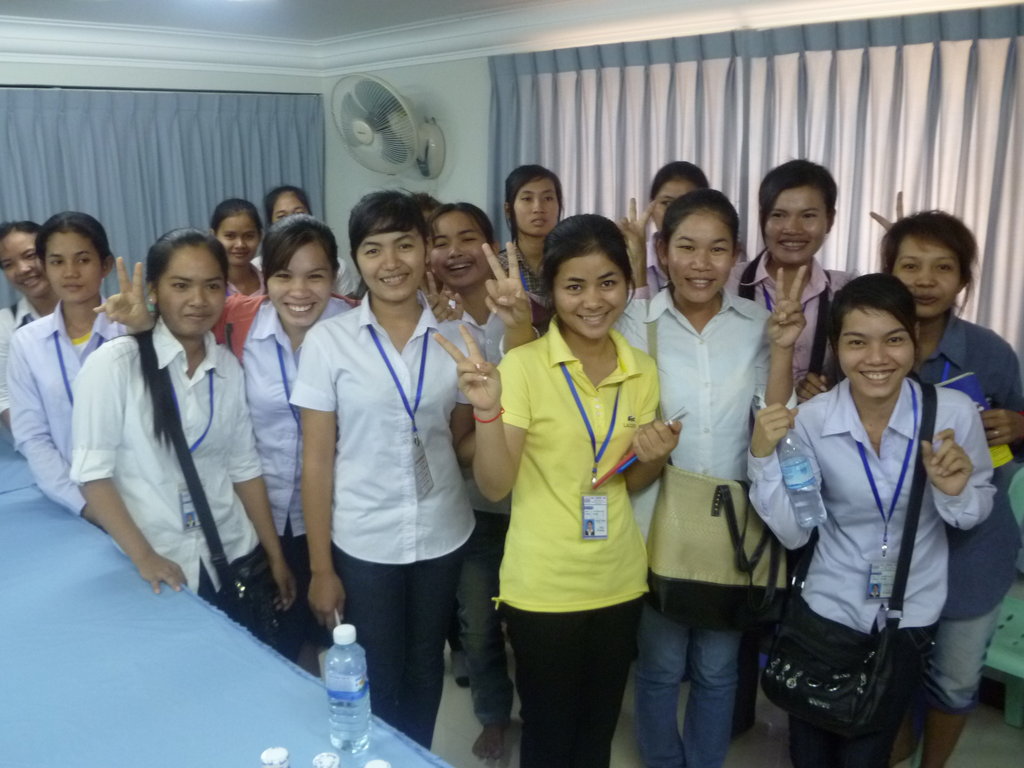 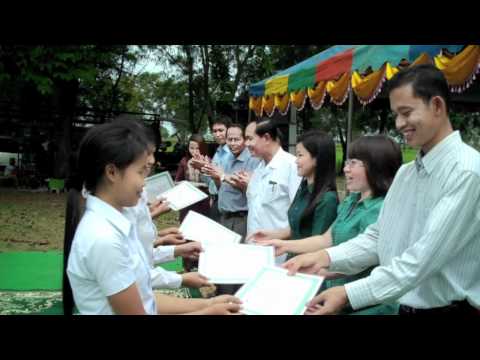 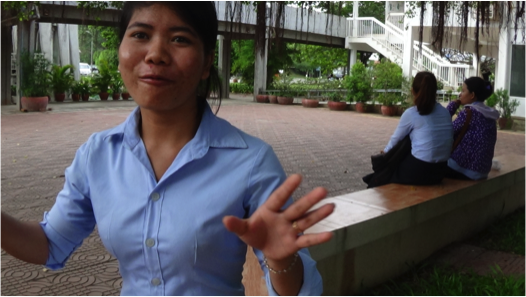 Namthorng at the Royal University of Phnom Penh

The following report is a true testament to the huge success of this program and its sister high school program GATE (Girls’ Access to Education). It demonstrates the strong will these girl scholars have to learn and succeed, if only given the basic support necessary. It is a tragedy that less than 2% of women in Cambodia possess education beyond high school. Help us change this destructive trend!

Twenty-two-year-old Namthorng originally from the Banteay Meanchey Province of Cambodia, entered Lotus Outreach’s program as an extremely poor student. Through her hard work she was able to receive a tertiary scholarship to enter university, and is now a highly sought after computer systems network administrator working in Phnom Penh. We were able to meet with Namthorng and interview her at the Royal University of Phnom Penh, where many GATEways scholars currently study.

The sense of growth in these girls between high school where they’re too shy to speak English and the tertiary level where they know enough English and have the confidence to use what they have, is extremely encouraging. This growth from high school to college is so large as these girls are now picking between multiple job offers, earning really good money and operating with confidence in a 21st century context. It shows the true strength of this program.

We never could have known how successful this program now going into it’s tenth year would be. This is real social development, not only in the girls themselves, but also in the impact on their families and rural communities. These scholars are simply showing that girls can succeed and achieve like boys in school and also in finding well-paid jobs. It is turning social norms on their head and helping erase cultural boundaries for the better.

Namthorng tells us, “I was supported by Lotus Outreach for 2 years in the GATE program before being assisted again by LO to win a position at PNC for a two year education course in IT.”

“After graduating I applied for a job at Cloud Net Cambodia where I work as a Sales Executive selling website design and finding clients to buy their product. I actually applied as a network administrator to set up computer systems, which is what I am trained for, but I decided to do this work as it is giving me experience that I don’t have. Many companies called me to interview so I have a lot of options and while I am now earning an OK salary of $200 a month, I’ve been offered $300 and could easily get $500 after a short time doing this kind of work.”

We asked Namthorng, “Did you ever think while living in Kob this would ever happen for you?”

She replied, “In my dream I always hoped that I could get a high salary but could not imagine that I would ever be able to study in such a good university and get such great qualifications. English is very important for getting a good job and I could not have got that without the PNC training where we focused on English 20 hours per week.

Namthorng continued, “When I go home I always tell my neighbors they should convince their children and grandchildren to try hard to study and get educated and don’t look down on others or listen to those giving negative opinions...When I was studying IT at PNC I lived in a shared house with 20 other girls. I was house leader and set ground rules to ensure we could live together peacefully such as a 10 pm curfew, no walking alone in the street at night, sharing housework and being honest with each other.”

We could never have hoped for such tremendous outcomes ten years earlier when we began supporting girls from poor Cambodian families and advocating for education as a tool to reduce violence against women, which has brought profound and definite change. The success of great young women like Namthorng emerging as leaders and role models in their communities definitely makes it all worthwhile! Help us sponsor more scholars and future leaders like Namthorng! Thank you! 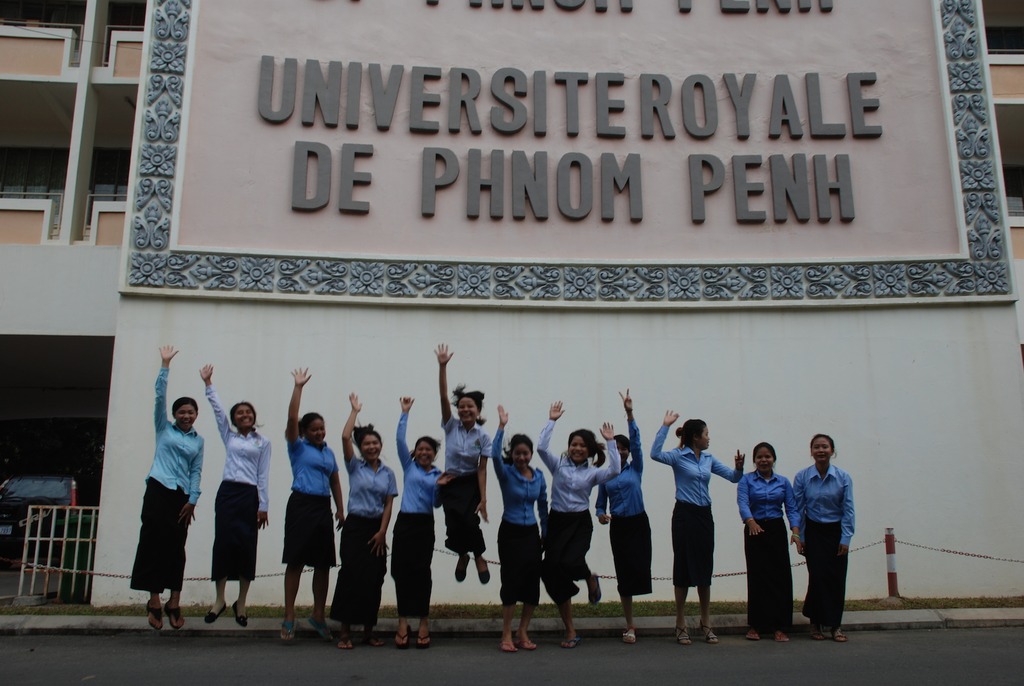