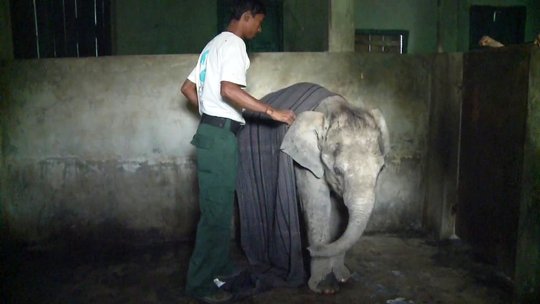 Philip being tucked in for the night

At 10 months of age, our adorable Philip is growing into a strong, happy and extremely naughty calf. He is very bashful around strangers and approaches cautiously, not wanting to miss out on anything yet keeping just a safe distance away. Hairier than the rest, Philip remains the centre of attention.

Let us also introduce you to Philip’s playmates: His days are spent in the company of Rani Deephor (as mentioned in a previous report) and Lilly Nunai. Philip and Rani are quite inseparable and follow each other around. Lilly, much younger than the two, has also now joined their group. She is a little unsure around the older elephant calves and prefers the company of Rani and Philip.

Still on nine milk feeds a day, the calves (both Rani and Philip) are given a mix of Nestogen and rice gruel for their feed – a nutritious combination which is also good for their digestion. The calves have also started consuming some grass and a bit of the seed mix offered to the older calves.

The calves are taken for small walks to their favorite play pond, in Panbari Reserve Forest, which is a short distance away from the centre. The walks, although infrequent due to the presence of wild elephants in the adjacent wildlife corridor, are most pleasurable.

Although the older girls really enjoy splashing about in the water, Philip isn’t very much for it and dislikes getting wet. He runs away at first opportunity, often leading Rani away with him as well. When coaxed into the water, he will scramble out at the earliest and stand across the pond, well out of reach, visibly indignant. Yet, all is forgiven and he comes running back in haste as soon as he is called to return to the Centre. He is a treat for the eyes!

Owing to the intense cold of the North Eastern winter, the calves all have blankets doubled-up and tied around them at night and an extra layer of blankets on their mattresses for warmth. They are also tucked in a little earlier due to shorter daylight hours. 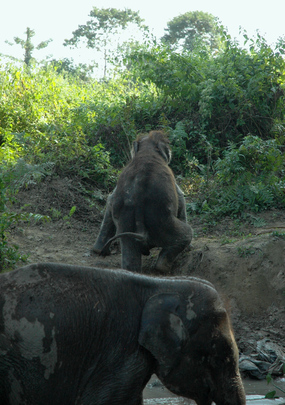 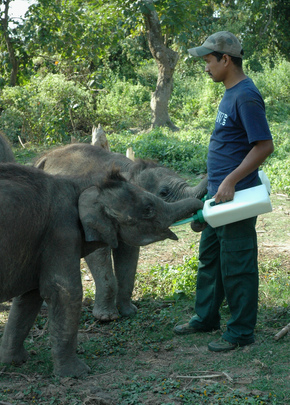 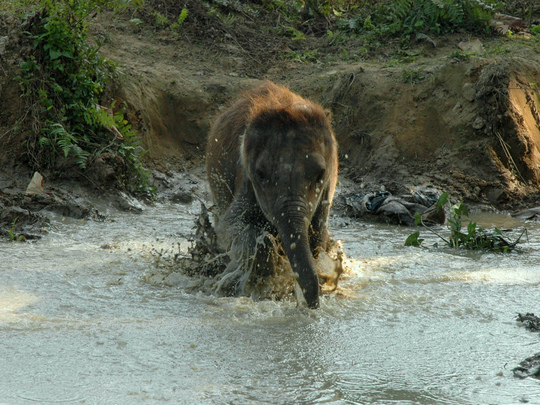 Philip hastily returning to the group when called
Jan 30, 2012

Relief For Family Of Slain Forest Guard in India

By Jose Louies - Head of Department, Guardians of the Wild 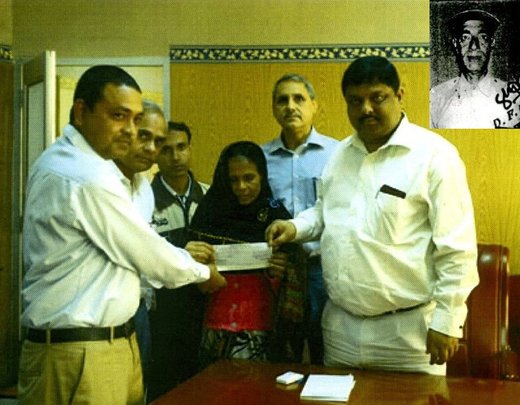 Mohammad Hasen Ali (inset) and his team were patrolling their beat in Rajiv Gandhi Orang National Park in Assam at about 2.30 am in 2010, when they encountered a gang of rhino poachers. Shots were fired and the poachers made good their escape leaving behind a wounded Hasen Ali. Ali’s team rushed him to the nearest medical facility but he was dead on arrival.

Ali is survived by his wife, Rabia Khatun, his aged parents and six children (two daughters and four sons). He was the only earning member in the family. His family received one lakh rupees ($2000) as terminal benefit facilitated through Wildlife Trust of India (WTI)’s Guardians of the Wild (Van Rakshak Project) that runs an umbrella insurance scheme for front-line staff across the country. Ali was among the 18,000 forest guards insured under this scheme.

Handing over the cheque, the Assam State Forest Minister, Mr. Rockybul Hussain, said, “We thank WTI for this help to the family of the deceased. It is definitely a significant support for our staff. We need such organisations to help us and we are thankful that WTI always works in collaboration with the Forest Department.”

“Wildlife in Assam is safe and sound because of dedicated officers like Hasen Ali. They have devoted their whole lives to protect the wildlife heritage, biodiversity and habitats and the supreme sacrifice of these people should be recognized, respected and compensated. This will encourage them to work with the same kind of dedication and commitment, and the future of our wildlife will be safe,” said Suresh Chand, Principal Chief Conservator of Forests (Wildlife).

WTI’s Guardians of the Wild project also trains and equips front-line staff across the country to combat wildlife crime. More than 8,600 front-line staff members from over 100 protected areas and more than 25 other wildlife areas have been trained under this project. 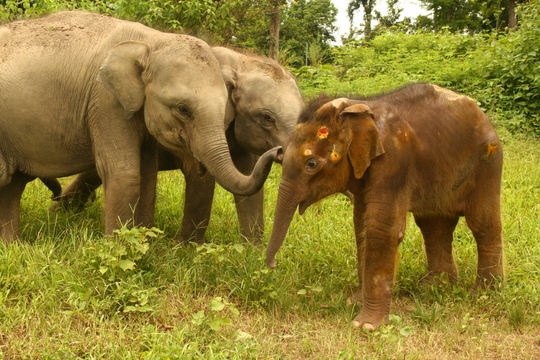 Philip at this first meeting with the older calves

Philip Dev was barely a month old when he was found fallen in a ravine along with his mother in Karbi Anglong, Assam, India. It was suspected that his mother slid into the ravine in an attempt to rescue him but couldn’t find her way out through the narrow opening. With much effort and help from the Forest Department and the local villagers, Philip was pulled out of the ravine but his mother succumbed to her injuries even as efforts to rescue her were underway. Philip was admitted to the Center for Wildlife Rehabilitation and Conservation (CWRC) in May 2011 for hand-raising and will be rehabilitated and reintegrated into the wild when he of the appropriate age.

Philip was admitted to CWRC in a severely weak and dehydrated condition, with lacerations all over his body including a particularly deep one at the base of his spine acquired during his slide down the rocky mountain side into the ravine. Due to his severely weakened condition, the calf could not even stand for the first two days. Intense monitoring and round-the-clock care put him on the road to recovery, but his wounds still took more than a few weeks to heal.

Once he had stabilized and his wounds considerably healed, Philip was introduced to the older calves at the centre, namely, Junmoni, Tara and Dihing, in the last week of June. The calves were allowed to interact for a couple of hours. The other calves, especially Junmoni, approached and stroked him very tenderly. This being his first encounter with other elephants, Philip was quite scared. He has been taken for small walks since the beginning of July. Initially, he was quite reluctant to leave his room but the keepers would regularly coax him out and he soon started enjoying the company of the three calves.

Growing up to be a pampered little fellow, he’s quite inquisitive and playful, and enthusiastically asks for attention. Philip’s first set of teeth erupted by mid-July! Soon he was even given teeny amounts of foliage to browse.

Although he is housed indoors because he is still quite young, he visits the older calves (who are housed in the outdoor nursery) regularly and gets to spend a lot of time in the open with them.

Philip was down with a bit of a tummy upset (a suspected viral infection) in Oct but soon recovered after treatment with antibiotics – just a minor setback. He has been growing naughtier by the day, and has been ever more playful since the time he has been housed with Rani (a new calf admitted in September). The calves have been going for regular walks in Panbari Reserve Forest and are also allowed to play in the shallow stream that runs close to CWRC.

We look forward to keeping you updated on Philip’s growth and progress! 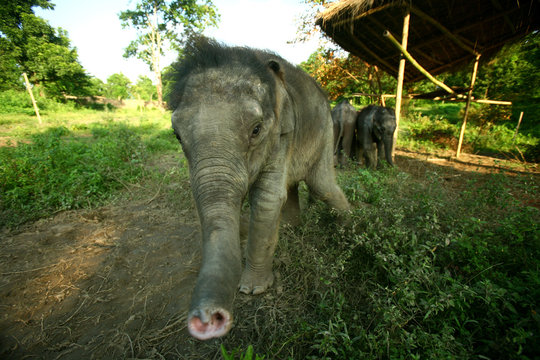 Philip in the outdoor nursery at CWRC Oct 2011 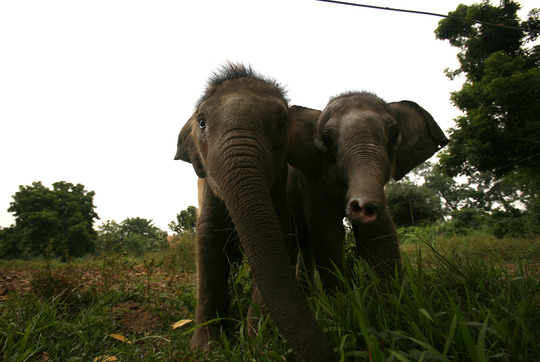 ‹ 1 ... 52 53 54 55 56 57 58 59 60
WARNING: Javascript is currently disabled or is not available in your browser. GlobalGiving makes extensive use of Javascript and will not function properly with Javascript disabled. Please enable Javascript and refresh this page.