Planting seeds for the future 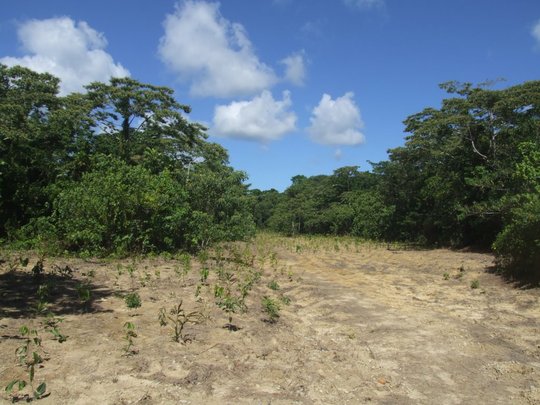 The most recent planting of 2000 trees

The restoration season is in full-swing in the Daintree with the Rainforest Rescue crew busy propagating and caring for rainforest seedlings.

As all trees planted by the Rainforest Rescue crew and volunteers are grown at our nursery, the Nursery Manager must ensure at least 20,000 seedlings are propagated annually. Most will be planted on sites we are restoring and a small quantity will be sold to local land holders restoring their own Daintree rainforest properties.

“Seeds are collected in the later part of the year when trees are fruiting; all are from the Daintree lowlands rainforest ensuring local provenance.

“Before restoring each property, we survey it and record the plant variety – helping us plan the appropriate species mix” said Joe Reichl, Land Manager.

At any given time, there are approximately 6000 potted plants within the nursery shade house, and around 4000 in the sun hardening area. Propagation requires the collection of local seeds which are then sorted and catalogued prior to being sown for the germination process.

The nursery has propagated 204 rainforest species. This is definitely a ‘success story’ as not all rainforest seeds germinate easily, and many seeds are available only intermittently. 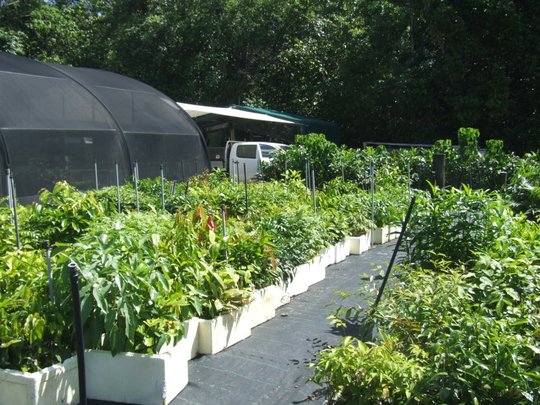 Our rainforest nursery is brimming with seedlings 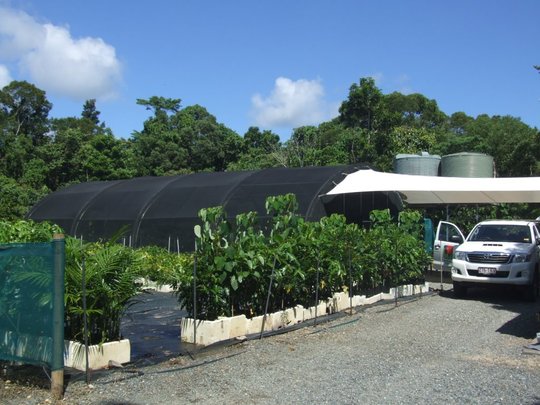 Healthy seedlings will be planted within 2 months
May 26, 2015

Habitat on the mend 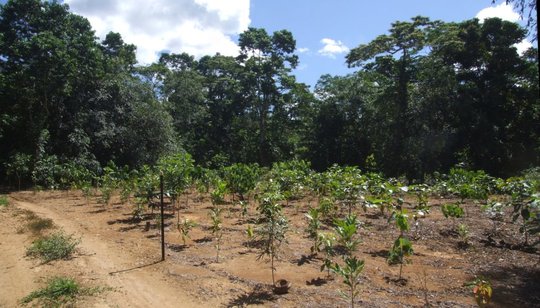 The restoration of Lot 46 Cape Tribulation Road continued with the removal of the final rubbish from the site, extensive tree planting, and ongoing growth monitoring.

Nine semi-trailer loads of rubbish were removed, including 13 car bodies, a shed, tank stand, a 24-foot boat trailer and rotting caravans. An additional five tonnes had to be carted by hand to not interfere with sensitive regeneration areas.

Restoration of the rainforest continued with an additional 16,235 trees planted in the remaining two now cleared areas. A week’s worth of measuring and monitoring previously planted seedling trees confining the success of our planting designs and restoration methods. The four-year-old plantings are eight metres tall and have already formed a closed canopy, and are producing fruits which are an important source of food for the local native fauna. Leaf litter from the young trees is now blanketing the previously bare ground; assisting the essential process of creating a healthy ecosystem. New ‘volunteer’ seedlings are now sprouting throughout the plantings, adding diversity and complexity to the rainforest.

Different planting designs were used to establish the best methods to restore rainforest on the property, with care taken to protect and enhance natural regeneration.

Since restoration began in 2010, Joe and his team of workers and volunteers have eradicated all of the introduced mature oil palms (known to be an environmental and aggressive weed species), and have made significant inroads towards eradicating the hundreds of oil palm seedlings.

Cassowaries have been sighted on the property on numerous occasions, feeding on the available fruits of the new plantings. They are known to nest at the back of the property where it adjoins the National Park.

Making Lot 46 a Cassowary Conservation Reserve
Located in the heart of the Daintree lowlands, Lot 46 was purchased in 2010 to protect it from further destruction. The property was cleared in the 1960s for cattle grazing and agriculture, and later for growing exotic oil palms. Rubbish and impenetrable weeds had taken over much of the property.

Of the 24 properties that Rainforest Rescue has saved, Lot 46 is the only one not purchased through fundraising. The bank currently holds the title of Lot 46 and until the loan is repaid, we are unable to protect the property in perpetuity.

Rainforest Rescue is currently fundraising to ensure Lot 46 is protected forever and turned into the Cassowary Conservation Reserve.

Cassowary chicks are eating us out of house and home 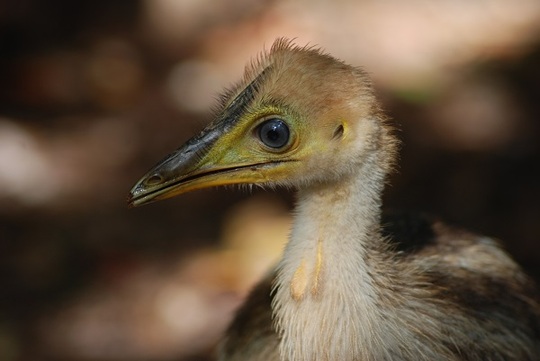 Chicks in care are growing larger by the day

It has now been four months since three cassowary chicks came into our care at the Cassowary Rehabilitation centre.

The chicks are rapidly growing and now eat around the equivalent of a two gallon bucket of fruit twice a day! Their food intact has nearly doubled in three months.

Fortunately your generous donations have enabled us to purchase a fridge which means we can now buy food in bulk – leading to considerable saving. Thank you.

Our carer Emily has said:

“I just wanted to let you know that the fridge is working wonderfully. I am now able to buy the fruit in bulk which is going to save a good deal of money.

I have worked it out and calculated that I am saving roughly $50 - $70 dollars a week so far on fruit, buying it in bulk rather than in loose quantities each day. Imagine how much I’ll save when the chicks are larger!”

Emily’s resourcefulness has also lead to other savings – she has now secured fgive-away not-quite perfect bananas from a local grower.

After a recent vet check-in we are also adding high quality dog biscuits into their food to provide a higher quality protein source.

After his visit Graham the vet, reported “They are all very bright and alert, doing very usual cassowary behaviour.

“One is growing faster than its sibling so we believe it might be a female. I will be able to confirm this at my next check up”.

Thank you for support in helping us care for these chicks. The southern cassowary is endangered in Australia and its distribution is limited to two small pockets of far north Queensland in the Wet Tropics. We are doing everything we can to increase the cassowary’s chance of survival. 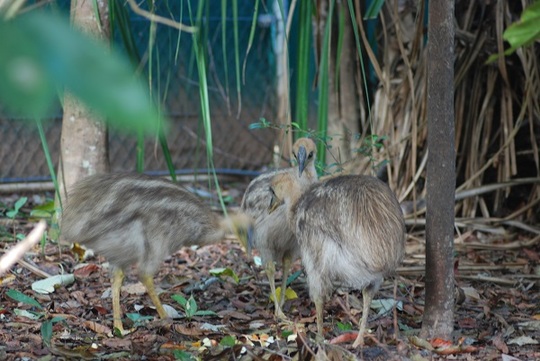 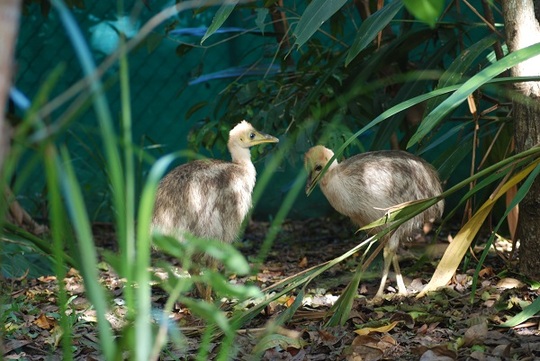 the siblings
‹ 1 ... 23 24 25 26 27 28 29 30 ... 39 ›
WARNING: Javascript is currently disabled or is not available in your browser. GlobalGiving makes extensive use of Javascript and will not function properly with Javascript disabled. Please enable Javascript and refresh this page.