WGEP Senegal reaches out to community

The 2010-11 school year is well underway in Fatick, Senegal, and in addition to providing tutoring, health and mentoring support to our scholars, WGEP Senegal is reaching out to the local community to promote and strengthen support for girls’ education in the area, meeting with local government, health and education officials, including the Regional Council of Fatick, the new Inspector of Education for the region, and the Project of Support for the Education of Girls run by the Senegalese Ministry of Education. WGEP Senegal Project Coordinator Adji Senghor also participated in a community round table hosted by the Regional Council of Fatick last November 11, 2010, to mark the National Day of Education for Girls. Adji raised awareness for the importance of helping girls stay in school amidst all of the issues that can pressure girls into dropping out such as early marriage, overreliance on girls for house and farm chores, and preference on boys for education. Community awareness, support  and buy-in is key to the success of our scholars in school, which is why it constitutes a major part of our work.

73 Girls Say "No!" to genital cutting

Women's Global believes that in order to successfully combat the practice of FGM, solutions must address the cultural and social underpinnings of FGM on multiple levels.

With our partner organization Ntanira Na Mugambo Tharaka Women’s Welfare Project (TWWP), we have developed a community education program aimed at helping communities in Tharaka eradicate this harmful practice by working through these cultural and social issues.

Called Circumcision with Words, our program also seeks to weave together the themes of girls' education, empowerment and the eradication of FGM in our awareness efforts and to offer families and communities alternate ways to celebrate a girl's rite of passage into womanhood without genital cutting.

Peace Corps Volunteer and WGEP Intern Hayley Webster spent 10 days in Tharaka, Kenya in December 2010 with WGEP Kenya, helping to facilitate the 2010 annual “Circumcision With Words” Alternative Rite of Passage ceremony. Hayley has been an intern with WGEP since 2008 and is currently serving as a public health Peace Corps Volunteer in Kakamega, Western Province, which is about 230 miles from the WGEP site in Tharaka. Alternative Rite of Passage Program to combat female genital mutilation (FGM) The 2010 “Circumcision with Words” Alternative Rite of Passage (ARP) ceremony was attended by 73 girls ranging from Class 3 (3rd grade) students to secondary school students. Originally, more than 100 girls had registered for the ARP, but a local Methodist church decided to also host an anti-FGM program, and girls from that church opted to participate in that program instead. The participants in our ARP program became involved in the ARP after being WGEP Kenya scholars and through their participation in activities run by WGEP Kenya partner Tharaka Women’s Welfare Programme. Many of the girls in this year’s ARP also have older sisters who have undergone FGM, but after participating in WGEP Kenya programs, these girls decided not to follow in the tradition of their sisters. Three families pulled out their girls at the last minute because they wanted them to be circumcised; TWWP went to visit and talk with the families and succeeded in persuading them to let their girls opt out of circumcision. These girls will participate in the 2011 ARP program. The 5-day ARP program was designed to mimic a traditional circumcision ceremony in which girls are first secluded for several days with other women and girls for the cutting, capped off by a celebration with family and friends at the end of the seclusion. The girls in the ARP were “secluded” for four days of awareness and empowerment workshops, after which a formal ceremony was celebrated with family, friends and neighbors with songs, dances and speeches. According to TWWP member and WGEP Project Coordinator Aniceta Kiriga, a significant change in attitudes in the community since TWWP was first founded, with children now taking the initiative to refuse FGM and many men publicly supporting ARP programs. The program has seen great success in the immediate area, and TWWP is hoping to replicate the program in the interior of Tharaka, where FGM is still widespread. The Tharaka Women’s Welfare Programme (TWWP) is a local , woman-led community organization that facilitates the WGEP Kenya Sisters-to-School program. TWWP was established in 1995 with the aim of eradicating female genital mutilation in Eastern Province and was the first such program in Kenya. To date, TWWP has helped more than 2,500 girls and their families to say “No!” to female genital mutilation. Drip irrigation, IGAs and sack gardening During her visit to Tharaka, Hayley also worked with TWWP to investigate opportunities within the community for drip irrigation, sack gardening and other income-generating activities (IGA). Drip irrigation can allow farmers to grow crops using a minimal supply of water, which can be especially helpful to families in an area like Tharaka which has been plagued by drought. Sack gardening can help families easily grow additional vegetables to improve nutrition especially during times of drought, famine and failed harvests. Additional income-generating activities, such as developing handmade goods from easily obtainable local materials for tourists/export, can give women an additional source of income for their families. In addition to enhancing the financial stability of local families, these practices can also help keep students, especially girls, in school, since many parents in the area will have their children drop out of school during times of financial hardship or famine so they can assist with providing for the family. The hope is that practices such as drip irrigation, sack gardening and other income-generating activities will help families stay financially stable and allow them to keep their children in school. 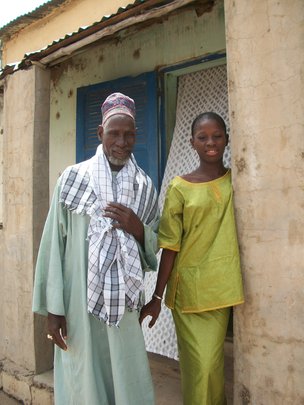 Diama and her father Oussman

﻿Thank you for your support of Women's Global Education Project-Senegal in 2010!

You have helped us touch the lives of girls in remote, rural areas of Senegal and help them have the chance for an education--a chance that they might otherwise never get. Because they are now able to go to school, our scholars can have hope of a changed life and of building a brighter future, and they in turn are also changing the minds and hopes of family, friends and communities around them.

One such girl is Diama Gaye.

Although unusual for their rural community of Diossong, Senegal, Diama was sent to school at a young age. This was because her mother valued education and wanted her daughter to have opportunities in life that she herself never had. But when her mother suddenly died, Diama's father, Oussman, withdrew his daughter from school and kept her at home to take over the house chores.

The young Diama was befriended by Maimona Ndong, a teacher at the local school, who began to mentor her. Maimona saw how much Diama wanted to go back to school and decided to talk to Oussman. At first, Oussman was unwilling to send his daughter back to school, especially because he could no longer afford the school fees.

Maimona, however, wouldn't give up. She told Oussman about Women's Global Education Project and our Sisters-to-School scholarship program and promised to help Diama apply for a scholarship to pay for the school fees.  It took some time, but eventually, Oussman agreed.

Now 12 years old, Diama is doing well in school and is aspiring to become an entrepreneur to help her community. Her father is proud of her success and has now become a strong advocate in the village for girls' education. As a religious leader, Oussman has been key in helping to change minds and in persuading other families to send their own daughters to school.

"School has been very positive for my daughter," Oussman says. "After seeing what it has done for her, I now believe that it is very important for girls to go to school."

‹ 1 ... 28 29 30 31 32 33 34 35 36 ›
WARNING: Javascript is currently disabled or is not available in your browser. GlobalGiving makes extensive use of Javascript and will not function properly with Javascript disabled. Please enable Javascript and refresh this page.