Kids learn to Life Save 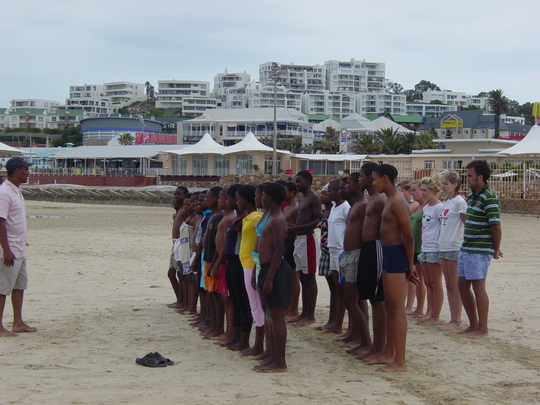 The kids are taught the importance of discipline

A selection of our project beneficiary youngsters have been chosen to partake in a beach lifesaving course which will culminate in them becoming qualified beach life guards. Not only will this course give the learners a very valuable life skill it will also provide them with a potential employment opportunity with a certified qualification that could allow them to work any where in the world. The initiative being run by, Hope Through Sport will take the kids through a three month training program ending with them taking their written and practical tests with the South African Lifesaving Association. Godfrey Afrika, Founder of Hope Through Sport said, “Getting your lifesaving qualification is such a valuable skill, yes it’s a qualification that can create employment for you anywhere in the world, but more important than that, you learn to save lives”. An important message that wrung true for Godfrey when he was part of the South African Global Relief Team, the first South African team to assist retrieving victims from the water after the devastating Tsunami that ripped through Indonesia in 2004. In March the team of children from United Through Sport SA will compete in their first life saving competition, the plan is for them to then take their exams in April. Last year there were 97 drownings in Nelson Mandela Bay, of which 95 were non-white. This is a clear example of the need to develop these skills amongst the kids in our township communities. “I’m so excited about this course, I can’t wait to be able to help people who can’t swim on our beaches…when I finish school I want to go over-seas and get a job somewhere like America or Australia!” – Ntsika Hlekani, 16, Project Beneficiary 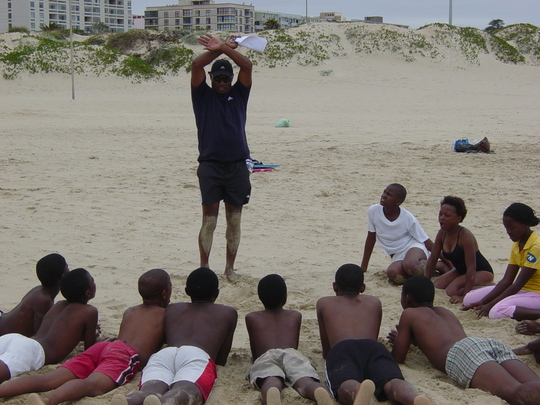 For 14 children and two coaches from our after school program growth points the opportunity of a life time recently arose.

After recent publicity has elevated United Through Sport South Africa's  status (including the Global Giving Campaign), a School and Rugby Club from the UK heard about our programs and made it their mission to make a difference!

The people of Saffron Walden, raised an amazing R250 000 to be able to fund a week long rugby trip and cultural exchange for the group of 12 and 13 year old boys from within the township communities that we are working in. Two of the 14 boys are directly supported through Global Giving donations.

The trip was a huge eye opener for the boys and a once in a life time opportunity. During the week they stayed with host familys from the school and participated in school lessons and got to experience quality facilities that they would never have used before like Astroturf, musical instruments and even a dance studio. The boys also visited London for the day and saw all the main attractions like Buckingham Palace and the London Eye. The team then participated in a local rugby tournament on the Friday, which they won with ease, beating all of the local opposition each by 40 points or more and lifted the Saffron Walden under 13 Rugby Trophy. They rounded off the tour with a trip to Twickenham to watch the Premiership final between London Irish and Leicester amongst an 81 000 capacity crowd.

The main aim of the tour was to give the boys an opportunity they would never normally receive with the aim of broadening their horizons and encouraging them to strive to achieve more than they would have previously perceived possible.

“The boys were so excited to be travelling to the UK that they had already been working over time on their rugby, their language skills and their geography and to me this is one of the keys to this kind of experience; they are already trying to improve themselves and broaden their horizons in preparation, imagine what can happen after they have experienced it!” – Nick Mould, Director, UTS SA

"I'll never forget this experience we saw so much, it was like another planet and we saw new and exciting things everyday. I definitely want to go back". - Athenkosi Mayinje, Player, UTS SA

On behalf of United Through Sport SA we would really like to thank all those donors that are making these amazing experiences possible for the orphaned and vulnerable children of our communities, together we are making them realize they too can achieve! 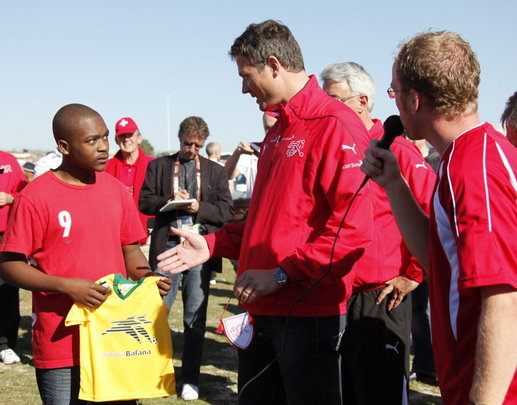 Handing over of gifts

On Monday the 21st June 2010 the city of Port Elizabeth hosted the World Cup match between Switzerland and Chile. The Swiss Embassy had sponsored 60 tickets for our beneficiaries for this match, which meant the world to the kids that got to receive these tickets. This sponsor was made possible through our institutional partner, Imbewu Suisse.

The previous day, it was all red and white at Dan Qeqe Stadium in Zwide, one of the townships we work in. The kids had the pleasure of meeting the Ambassador of Switzerland, Mr Rudolf Baerfuss, they also met Arthur Dubach who is the godfather of Roger Federer and they met one of the players from the Switzerland team, Philippe Senderos. The mayor of the Nelson Mandela Bay, Mr Zanoxolo Wayile was also present to honour this event and there was a lot of media from Switzerland and the wider Europe. The Swiss Football Federation was at the location to make official the partnership between them and Imbewu Suisse, interact with the community and distribute balls.

With the World Cup being hosted in South Africa, Alex Miescher, the secretary general of the Federation, wanted to acknowledge that they were not only about the sport but also wanted to engage on a more social level with the communities of South Africa. Because of his injury, Senderos was able to go meet with the kids, play with them and he also gave a bit of motivational talk. He was very popular with the kids as they knew him from being with Arsenal. By sponsoring the tickets, t-shirts and caps, the Embassy wanted to show a Switzerland that cares. The Ambassador talked to the kids about Switzerland and him and the Mayor gave some motivational words to the kids. Arthur Dubach gave out some Roger Federer caps and t-shirts to the kids, who were all too excited.In the later afternoon, there was a football tournament between the kids where one team was in Swiss t-shirts and the other in South African t-shirts.

Match day was full of excitement carried over from the previous day as the kids went to watch the game at the Nelson Mandela Bay Stadium all geared up in their red supporters t-shirts. Walking around the stadium with the Ambassador made the kids feel extremely important and proud to be part of this group. It was a lot of fun watching the game especially since the kids had been “hanging out” with one of the players just the previous day! They were singing Swiss songs, which caught a lot people’s attention as it was rather unusual to see these South African kids singing Swiss songs with so much passion and excitement. The atmosphere was just beautiful and the kids had a great time watching the match.

"I hope to travel to Switzerland to return the feeling that they gave us here and meet the kids there. I had a great time cheering for the Swiss team!" - Zanyiwe Dukumbana, Project Beneficiary 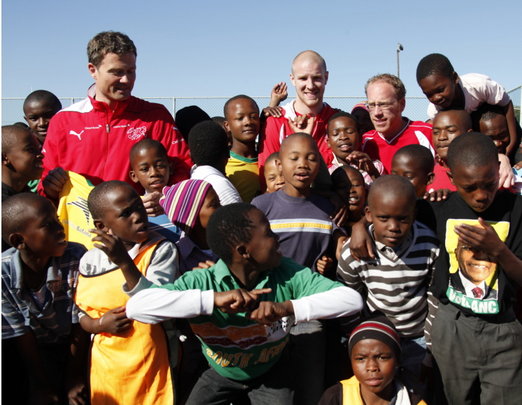 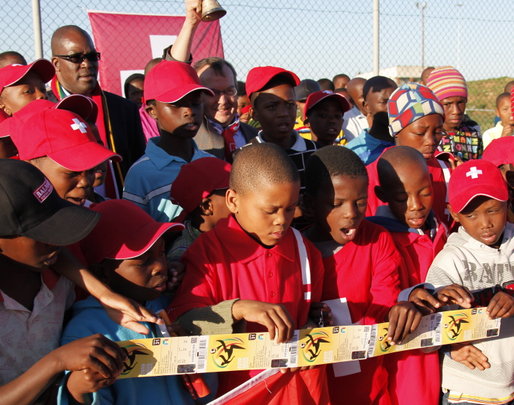 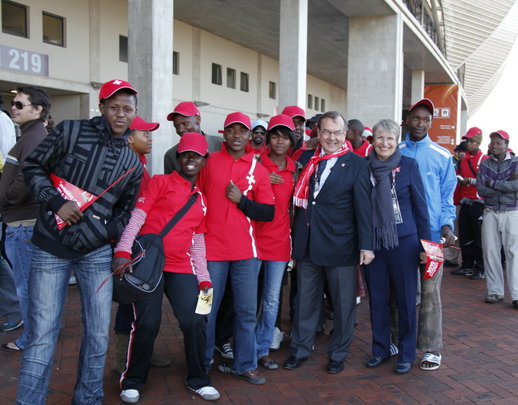 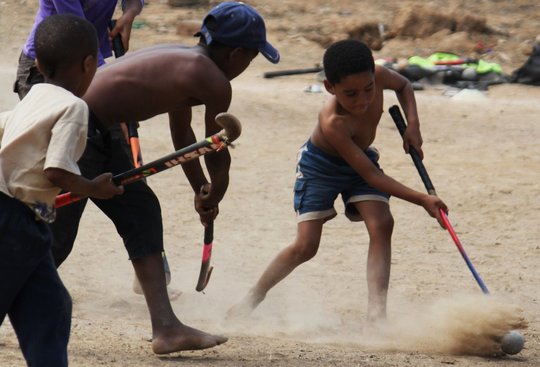 dustball
‹ 1 ... 13 14 15 16 17 18 19 20 21 ›
WARNING: Javascript is currently disabled or is not available in your browser. GlobalGiving makes extensive use of Javascript and will not function properly with Javascript disabled. Please enable Javascript and refresh this page.