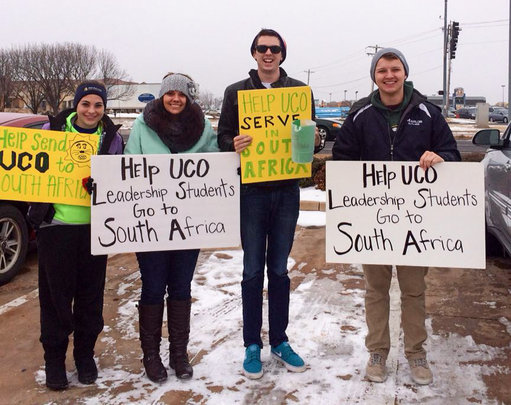 Pre-Departure work put in for the trip

For the past few years, UTS has offered sport tours and cultural trips for School groups,
University / Colleges and Sports teams from around the world, and has facilitated over 14 such trips in the past few years. This year we built a new relationship with an American group from the University of Central Oklahoma (UCO). The 15 students and their teacher had been preparing for this trip for a number of months, taking a leadership course and weekly classes on South Africa.  Their main reason for the tour, other than the cultural aspect, was to get involved with a local community and impart their knowledge and resources to make a positive change in the lives of the people in the community.

After much deliberation, UTS decided that the Langbos Community Centre would be the best project for the UCO group. In a small rural community near Addo, the centre includes the Intsikelelo Daycare (which has about 30 children aged 3-6 years attending daily), a soup kitchen (feeding up to 150 residents of the community) a mobile clinic to administer ARVs for the HIV+ residents and a daily after school club for the older kids from the surrounding area.  The Langbos community is severely deprived, with a high rate of unemployment and HIV and AIDS. Most of the residents are seasonal farm workers and are out of work in the first 5 months of the year. It is in these months that the centre feels the pressure as all parents send their kids to the day-care centre so they can at least receive one meal for the day.

The focus of the trip would be to build some wooden benches for the clinic waiting room, to work with the young children of the day care focusing on basic English and Maths, to support the local teachers with new learning aids and training in how to use them and to provide an after school sports programme for the older kids. After receiving this information, the group went all out in collecting puzzles, display charts and all sorts of useful material for the day-care as well as doing research on DIY  bench designs.

The week saw the students do some teaching of the alphabet and phonics and the five senses to the kids  and a lot of playtime in-between where song and dance were the order of the day! To break the intense learning, the students had a couple of creative sessions with the kids making puppets and other forms of art. To better communicate with the kids, the UCO students really stretched themselves learning basic phrases throughout the week in the local language, Xhosa. Throughout all of this, the DIY project was on track and going very well for the first time bench-makers who (upon completion) felt inspired to start up a little DIY business back home! Once they saw their finished products, the guys were very proud of their achievement.

Of course a week is not complete without any sport in the UTS camp, so in the afternoons- when the older kids arrived from school, the UCO students had fun teaching the kids some American sports like baseball and American Football, with equipment they had brought with them.

A very fulfilling week for the UCO guys, packed with the project work and excursions including wild life viewing, dune boarding and African dancing, ended with an authentic African meal of roast lamb and Kudu Pie, under the stars.

It was hugely successful for both parties and as a result this could be the start of a series of annual trips from Oklahoma. The trip would not have been possible without our partner agent in America, United Planet. Previously, they have sent us individuals for our volunteer program, but we can safely say the pioneer group trip was a huge success and we look forward to having more of these!

“It’s been an inspiring week for us, we had no idea of the impact that we could make in a short space of time, but also feel like we need to come back for longer and build upon the foundations we have laid with this trip, we’ll definitely be back.” – Dr Jarrett Jobe, Leader of  University of Central Oklahoma Group 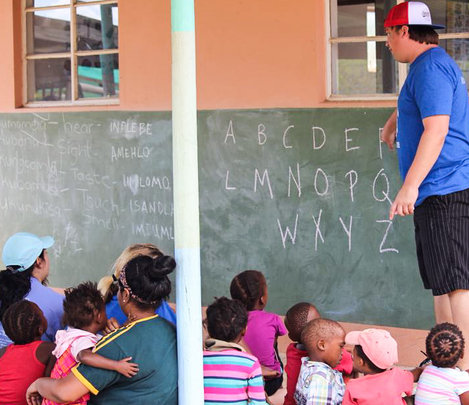 Jarrett taking the lead in this teaching session 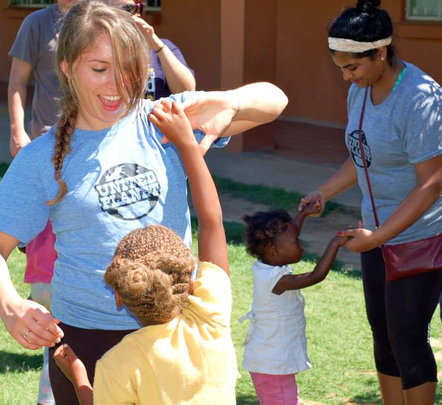 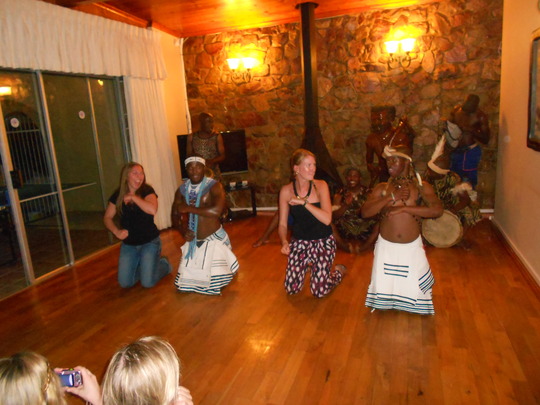 The girls trying out some African Dancing 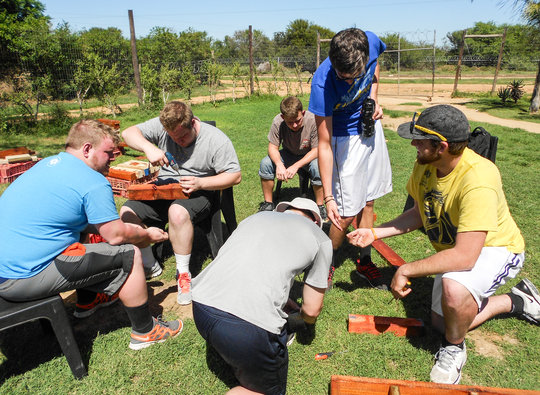 The DIY project- making benches for the centre 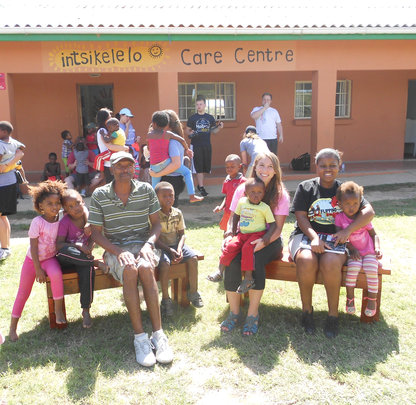 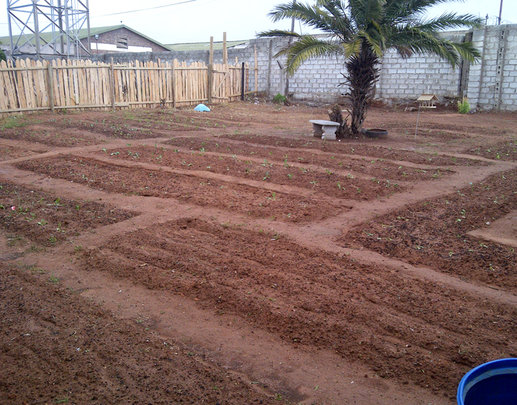 Last October brought around the 4th annual visit from Wellington College’s Social Apprentices. Each year for the past four years has seen Wellington send a group of young socially conscious pupils to work within the United Through Sport programmes, with a focus on creating a legacy from each trip through providing useful facilities and lasting relationships with their South African peers.

Past trips have seen the group build a kitchen, a gym facility and a computer room for the UTS School of Excellence Programme. This group’s focus was creating a vegetable garden that would supply the UTS kitchen with enough vegetables on an on-going basis to feed the 90 Junior School of Excellence (JSE) Programme participants on a daily basis, thus providing further sustainability to the programme.

The 40 Wellington pupils and four teachers along with their 40 JSE buddies worked tirelessly for four days to turn an unused patch of land into a huge vegetable garden capable of producing 10 kg of vegetables per week, including Carrots, Spinach, Broccoli, Cauliflower, Beans and lettuce. The garden was also fitted with four 5000 litre water tanks and irrigation network to use the water collected from the school roof to keep the plants watered.

Apart from the success of the vegetable garden, the Wellington group also formed lasting relationships with their ‘buddies’. This programme saw them spending the week interacting with kids from the JSE programme who have been put forward for Senior School of Excellence (SSE) scholarships for next year, with the aim of improving their communication skills and broadening their horizons. The week’s activities saw them spending time coaching sports at Emzomcane Primary School, visiting Langbos crèche near Addo, visiting Kayalethu Boys Haven and bowling with their buddies, before ending the week with an overnight trip to the Shamwari Conservation Experience.

The 2013 Wellington group were so successful with their fundraising that they far surpassed the total needed for the Vegetable garden and were able to sponsor a further 5 children in the SSE programme for this year. This is added to the two currently being sponsored all the way through high school by Stanley House from the College.

“This year’s group from Wellington added such a valuable contribution through the garden, through the buddy relationships and through the funds raised for scholarships! Their annual trip has become an integral part of our programmes!” – Nosipho ‘Spakes’ Xapile – Program Manager, Junior School of Excellence Programme. 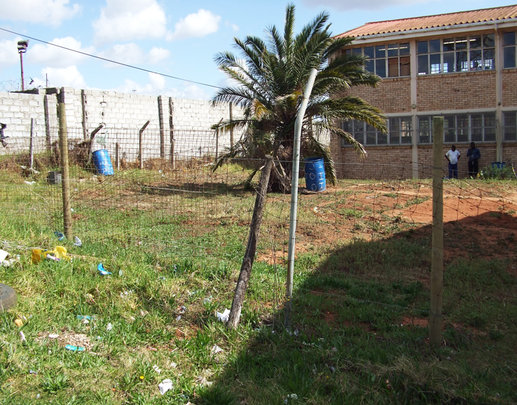 The land before work was done 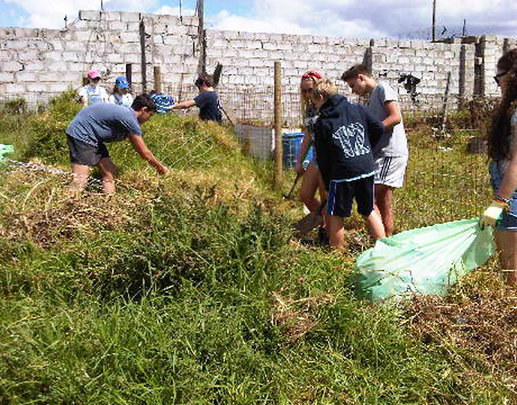 Clearing up before work 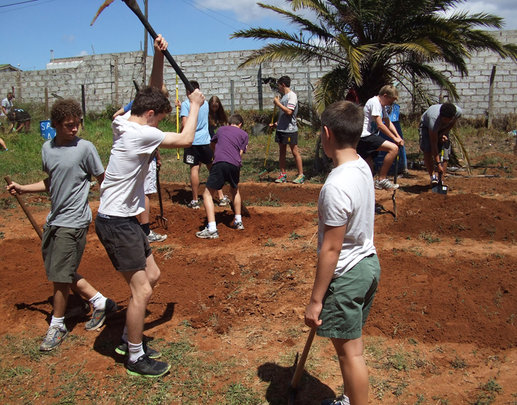 Preparing the beds for planting 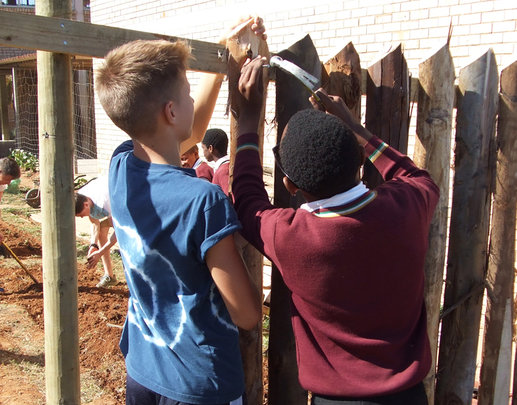 Buddies at work putting up the fence 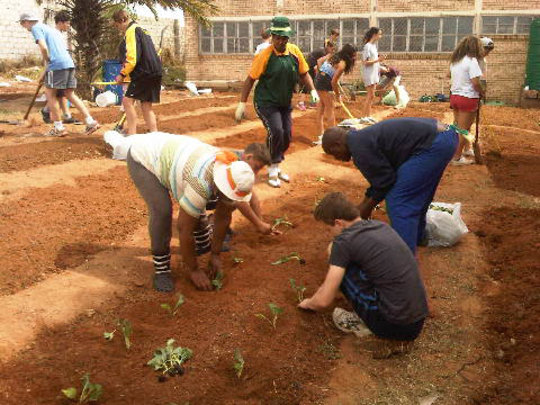 The Happiest 5km on The Planet 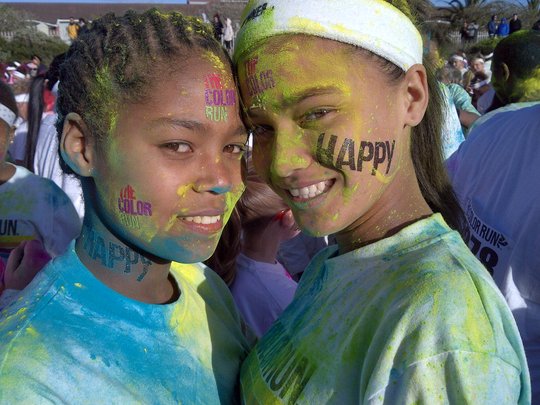 Two of our kids enjoying the race

“The happiest day of my life”!  This is how Tazneem, one of our Junior School of Excellence Netball players described taking part in The Color Run, held in Port Elizabeth yesterday.  Tazneem was one of 25 children and 17 volunteers from UTS lucky enough to take part in the first ever Color Run on the African continent.

The Color Run, billed as “The happiest 5km on the planet”, is a paint race that celebrates health, happiness, individuality and giving back to the community.  So for us it was extremely fitting that we were identified as the Charity partner for the event in Port Elizabeth, as it encompasses many of the values we instill into our sports programmes.

As Charity partner to The Color Run Port Elizabeth we have experienced nothing but fun and happiness since beginning work with the organizers two weeks ago.  The Color Run team from Portugal, encompass the attitude of the race with their warm, kind and cheerful nature which made the experience for over 50 volunteers from UTS working with them in the build up and on the day of the race almost as enjoyable as the race itself.

On race day, it was an early start for all the volunteers and the 25 children from our JSE programme to get to The Nelson Mandela Metropolitan University by 05h30 to prepare for the days events.  Our children enjoyed the race with over 9000 other participants who were all desperate to be a part of this inaugural event in Africa.  The race itself was out of this world for the kids, with bursts of color continually filling the air as they ran around the 5km course.  Each individual had bags of color powder to throw at each other as well as various ‘Color Stations’ of volunteers shooting color at runners as they passed by.  There was more entertainment on the way around with cheerleaders, drummers and fitness instructors all part of the carnival atmosphere willing the runners on.

At the end of the race the festival continued for several hours with music and big screens showing the festivities.  One of the highlights for our kids was being called up on stage in front of thousands of other runners to throw more colored powder packets to the cheering participants.

It was a hugely successful day and one that we, and the lucky 25 children from our JSE will never forget.  It was a real pleasure to work with The Color Run team and be a part of the event all the way through and as part of the legacy, The Color Run have donated funds to ensure that some of those children who took part in the race yesterday will receive a scholarship to go to a top level high school in 2014.  What an amazing day and what an amazing experience!!! 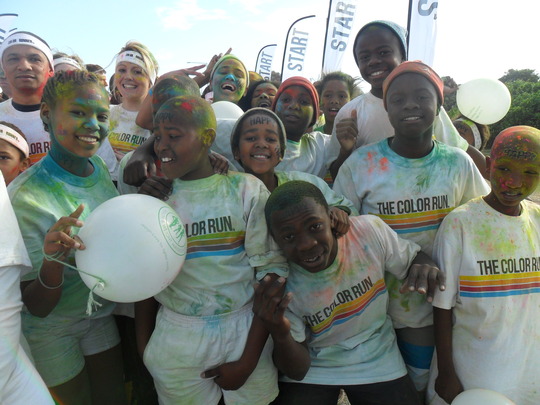 A group of our kids at the start line
‹ 1 ... 12 13 14 15 16 17 18 19 ... 21 ›
WARNING: Javascript is currently disabled or is not available in your browser. GlobalGiving makes extensive use of Javascript and will not function properly with Javascript disabled. Please enable Javascript and refresh this page.