For the months July to December 2016, United Through Sport was working with, amongst others, three schools in the Swartkops community. Each week, UTS would conduct sport coaching sessions and life skills sessions to children aged between 10 and 13 years in grades 4 to 7. The life skills sessions were only conducted with the 13 year olds as the topics covered issues such as HIV/AIDS as well as alcohol and drug abuse.  The younger children were involved in the sport coaching only and developed their skills in netball, rugby, football, hockey, tennis and cricket.

At the end of the year, with the support of a local business in the Swartkops community, United Through Sport bought hygiene packs and school shoes for the boys and girls of the three schools. The packs consisted of bath soaps, toothbrushes, toothpaste, body sprays, deodorant and some sanitary towels for the girls. In total 244 girls and 207 boys received the duo of hygiene packs and school shoes.

At each school, the children were extremely excited to receive their gifts, especially since it was at the beginning of the Christmas break. Their facial expressions and the smiles on their faces showed their appreciation for the gesture, and for some of the children, this was the very first time getting their own toiletry and brand new shoes for school. They promised to walk with pride and confidence in the year 2017. A few of the children expressed how, for once, they will no longer be teased for having torn school shoes or wearing casual shoes to school.

“It is wonderful that The Swartkops Terminal is looking out for the community they operate their business in and shows care for the children of their employees.”  Tandile, Life Skills Trainer, UTS 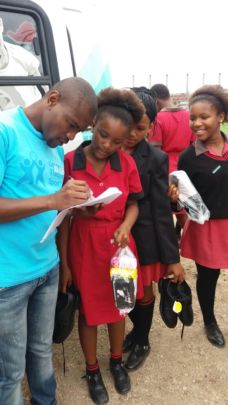 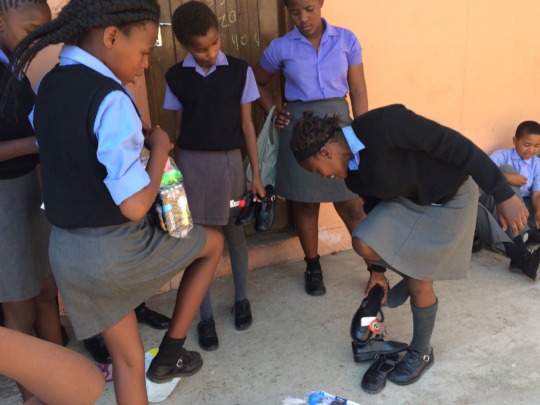 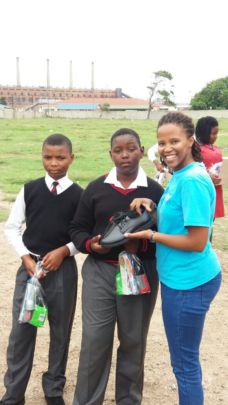 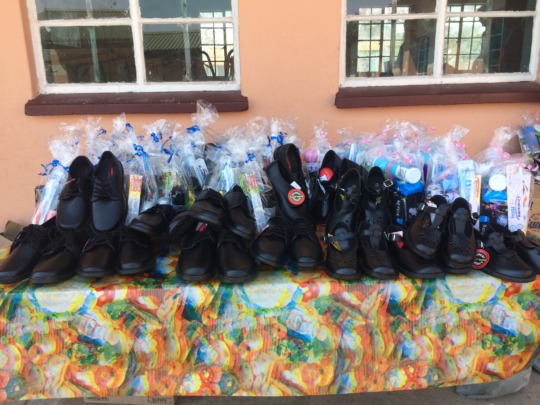 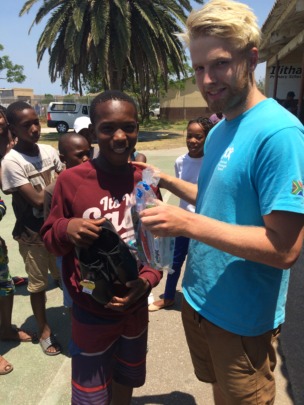 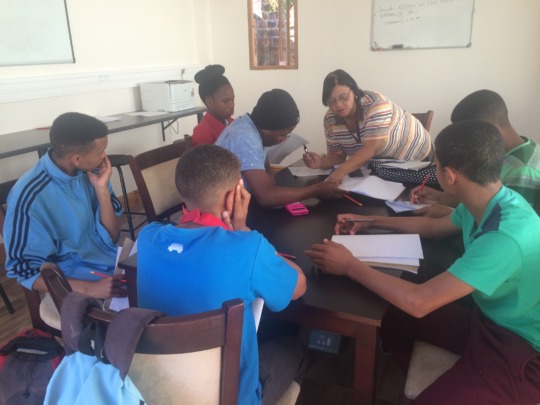 After hours of hard work from the older and stronger Senior School of Excellence (SSE) boys, they are very proud to have assisted in the building of their very own resource centre!

The Betts Resource Centre is a project that came about with funding from a shared funder, terre des hommes Germany, between five organisations in the Nelson Mandela Bay; United Through Sport being one of them. The aim of the project was to build or upgrade a facility where youth in the local communities can benefit from skills development in a safe environment.

The youth of the five partner organisations had to decide on an institute to benefit and also give in time to volunteer the physical labour in achieving this goal. Different options were put forward and put to the vote, and the final decision was to build a resource centre at United Through Sport which would be a study centre that the SSE children can use, as well as youth from the other four partners.

To our convenience, the father of volunteer coordinator at the time (Billy) wanted to come out to South Africa and use his building expertise to benefit our programmes. Kevin Betts couldn’t have chosen a better time to come from the UK. The father and son team had a crew of volunteers, mostly consisting of SSE beneficiaries, assisting them with the project and they got the job done in two weeks.

The Betts Resource Centre acts as a multi-purpose study centre where SSE beneficiaries work on their homework, receive extra tuition as well as research projects for school. They are also free to use it as a mini library and it acts as a source of information for the final year students that need to look into opportunities for their tertiary studies. UTS indirect staff member, a retired English teacher, Mrs Prinsloo is available to work with those children needing extra academics, and our international volunteers and staff members are available for daily homework sessions in the centre.

“Knowing that I will benefit directly from the centre kept me motivated to help Mr Betts with manual labour during the school holiday, plus he was cool to work with. I am extremely proud when I step in the finished product now!”- Ayabonga, SSE Beneficiary. 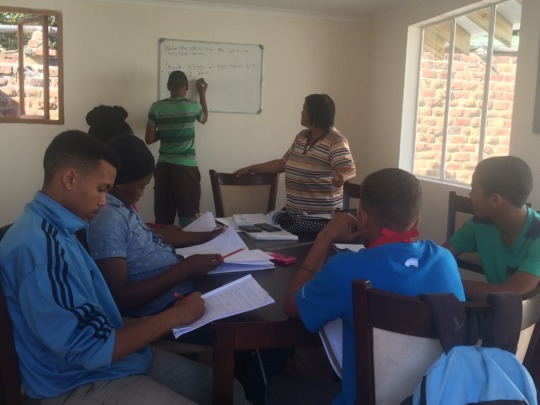 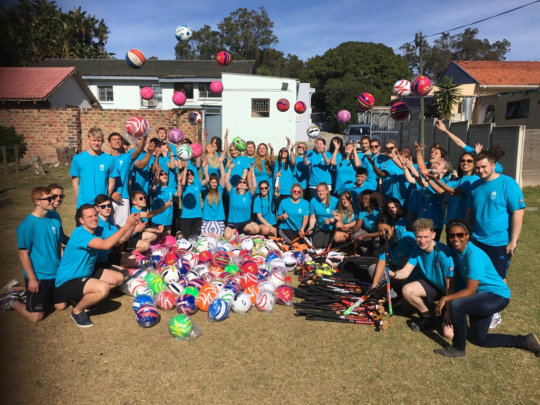 This year, United Through Sport was very fortunate to be a beneficiary of the Nelson Mandela Bay Business Chamber drive for Nelson Mandela Day. In the weeks leading up to July 18th, the Business Chamber called out to businesses in the Bay to donate used or new sports equipment which would be handed over to UTS on this special day. The sports equipment drive was a huge success with the Business Chamber receiving over R35000 worth of equipment through the initiative.  UTS will facilitate the distribution of the equipment and will utilize it in the Mass Participation Programme which is implemented in primary schools around the Bay.

For United Through Sport, July 18th was not only a celebration for Mandela Day and receiving sports equipment, but also the celebration and official launch of a 1200m 4G mini astro-turf at Astra Primary School, one of the Junior School of Excellence centers; a first facility of its kind in the townships of Nelson Mandela Bay.The multi-purpose astro-turf was funded by the local e’Zethu Development Trust, Empower and the Sedbergh School in the UK, through the Bhubesi Pride Foundation. Astra Primary serves as a hub in the Northern Areas, meaning that the turf will be available for structured use by the community at large primarily for Hockey and Soccer training.

By donating sports equipment, the contributors were also securing a spot to show off their football skills in friendly games played on the new turf. The first game saw the heads of the Business Chamber and UTS going head to head against the Astra boys in a very entertaining 15 minutes. Needless to say, the young blood took charge in their territory and showed the businessmen who’s boss on the turf!

With all these festivities amalgamated on Mandela Day, it was only fitting that the event was dignified by the presence of Executive Mayor of the Nelson Mandela Bay and President of the South African Football Association (SAFA), Dr Danny Jordaan. Other dignitaries included the CEOS and Directors of the businesses represented in the Business Chamber, as well as representatives from the South African Football Association (SAFA) and the headmasters of our Senior School of Excellence partner schools. In a warm speech, the honourable Mayor showed appreciation for the work that United Through Sport does to uplift and develop the youth that come from such disadvantaged communities in the Bay, giving these youngsters a much brighter hope for their future.

Mandela Day 2016 was a very special day for United Through Sport, highlighting the importance of concrete partnerships to pursue common goals. It was indeed very powerful to come together with the above mentioned institutions and organisations, holding hands in promoting youth development through sport.

“Facilities like this one and partnerships like these are the key to long term sustainable development.  We are proud to support this initiative and look forward to working with United Through Sport and the other key partners in the future”, Dr Danny Jordaan, Nelson Mandela Bay Executive Mayor. 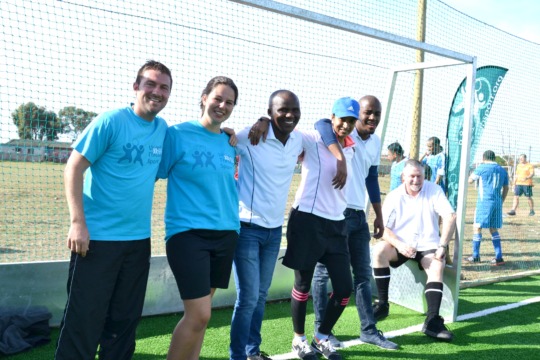 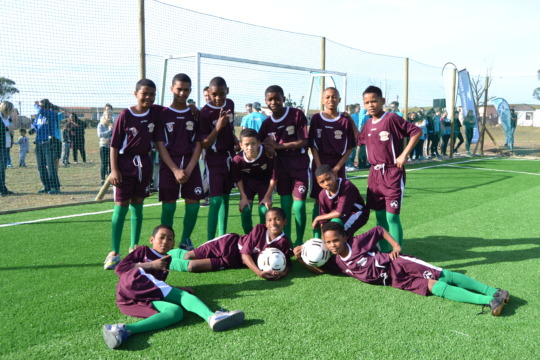 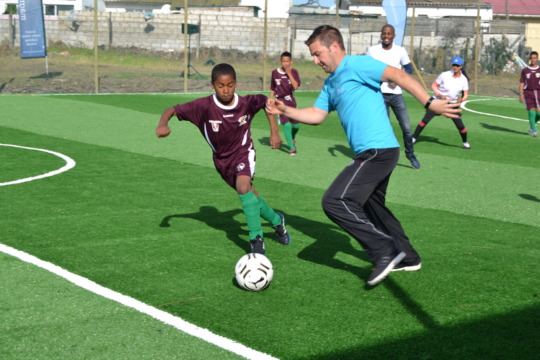 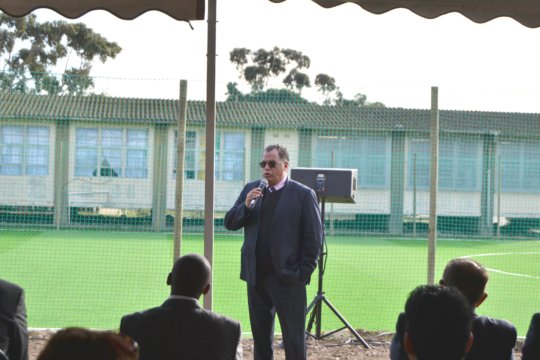 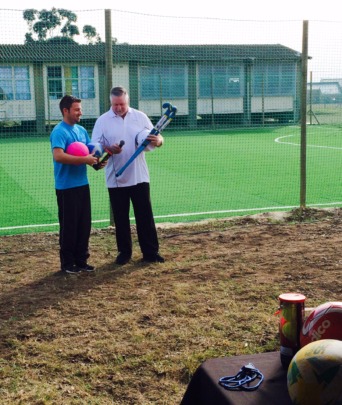 Equipment Hand-Over
‹ 1 ... 8 9 10 11 12 13 14 15 ... 20 ›
WARNING: Javascript is currently disabled or is not available in your browser. GlobalGiving makes extensive use of Javascript and will not function properly with Javascript disabled. Please enable Javascript and refresh this page.