10 Years of Impact in Nicaragua 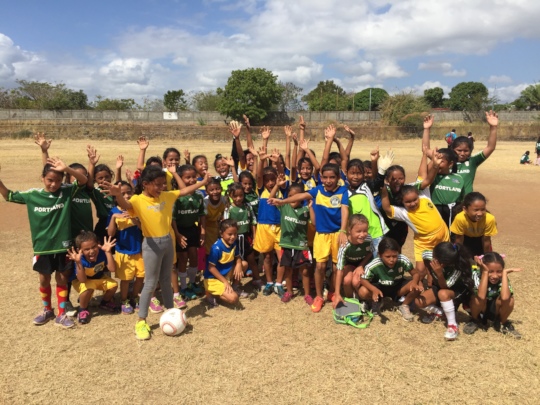 This week, we had the honor of celebrating 10 years of impact at Soccer Without Borders Nicaragua. There are few words to describe a decade, but we hope that the project reports, Facebook posts, stories, blogs, and videos over the years have helped paint the picture of the collective journey to build a unique educational and impactful space for girls in Granada and beyond. Thank you for being a part of this impact.

As we look ahead to new communities in Nicaragua where girls do not yet have these opportunities, we believe that the ripple of impact has only begun. Right now, we are just a handful of donations away from securing our place in the Girl Fund, which would unlock funding that would help us build on the legacy of programming in Granada by expanding our reach to more girls in Nicaragua. If you haven't already supported the campaign (we aren't able to segment this report list), which ends on Thursday, March 15th, please consider voting for Soccer Without Borders with a donation of $10 for 10 years. If you have already voted, THANK YOU! Any help in spreading the word would be much appreciated.

To commemorate this milestone, on International Women's Day over 150 girls from our program headed to Managua to watch our volunteer coaches from Penn State Women's Soccer take on the Nicaraguan Women's National Team. The game was live streamed on Facebook and was live on national public television, making it one of the most watched women's sports events in Nicaragua ever. Accessible female athlete role models are a key factor in retaining girls in sport, which leads to many other mental and physical health, social, and educational benefits for girls.

Following the game, on Saturday March 10th, we celebrated 10 years with a series of friendly matches between our Granada teams, and a citywide celebration in Calle Santa Lucia, including a Zumbathon that had the whole community up on its feet.

Muchisimas gracias for all of your support, for reading this report, and for your part in building the program that today has a 97% academic advancement rate from one grade to the next, 4 university scholarship recipients, 33 secondary school scholarship recipients, and has seen 10 different girls make the national team. Onward we go!

The Soccer Without Borders Team 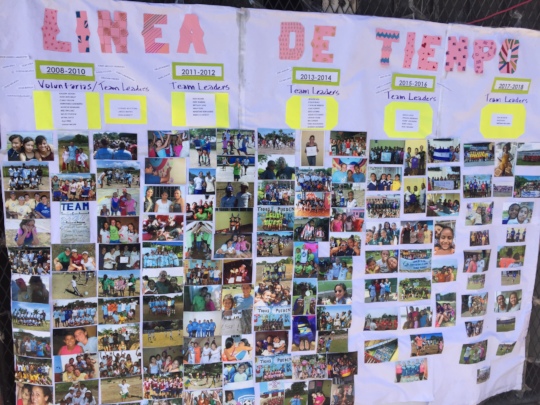 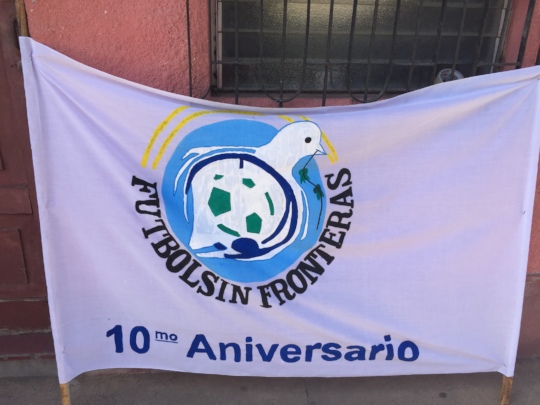 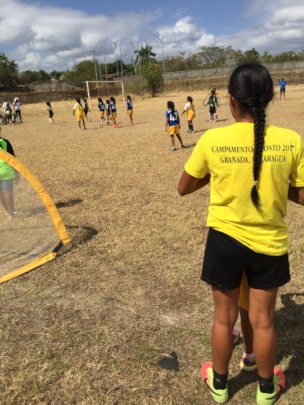 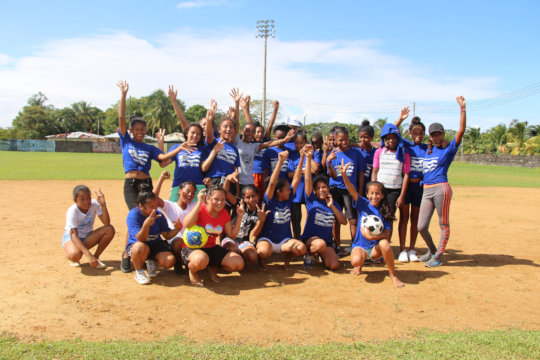 All photos courtesy of FADCANIC

“I had so many moments that made me realize how lucky I was to have grown up playing sports, but more importantly how essential it is to keep sharing sports to all those who feel unreachable. The power sport had to bring 6 different communities together, and empower young girls to be strong and confident leaders was truly inspiring.”

In partnership with Women Win, Soccer Without Borders is thrilled to announce Women's Sports Corps, a unique fellowship opportunity that adapts and expands our existing Team Leader program to focus on women and girls globally. Made possible by the U.S. Embassy, Women's Sports Corps is kicking off with a series of camps and coaching clinics throughout 2018-19 with an aim of increasing girls participation in soccer, building girls' leadership skills, and identifying and supporting the growth of female coach role models in communities across Nicaragua.

On January 29th, a team of 5 FSF coaches & American fellows collaborated with local partner FADCANIC on the first camp. Together, they led a week of soccer programming and leadership workshops with more than 100 girls from Pearl Lagoon and 5 surrounding communities, most of whom were playing for the very first time. The design was inspired by our annual T.E.A.M. Camp in Granada which, for the last 10 years, has begun the New Year with a week of soccer camp and team-building activities with the girls in our core program.

"We had no idea what to expect for our first camp in Pearl Lagoon. We had gotten the chance to help coach week-long camps in Granada and also participated in many camps growing up in the US, but what would it be like in Pearl Lagoon? How old are the girls? Are they accustomed to playing sports? Do they know how to play soccer? What language will they speak? In the end, camp is about forming relationships with players, local coaches, community members, and partner nonprofits, all while highlighting examples of positive female leadership. This could not have been truer for our time in Pearl Lagoon,” reflected Fellow Brittany Williams.

This approach of expanding opportunities through strategic partnerhips marks the beginning of a new strategy to better meet the overwhelming gap and need for girls' sport and leadership programming across the country. Getting to know each context is a new challenge, as each region of the country has its unique culture, identity, logistics, and histories. Local partners are essential.

"Pearl Lagoon was an incredibly welcoming community… Girls participating in the camp came in from six communities: Pearl Lagoon (Laguna de Perlas), Raitipura, Awas, Haulouver, Kukra Hill, and Kahkabila. Some walked in from town. Some traveled an hour by bus. Some rode across by boat. The modes of transportation differed, as did the languages and dialects each community spoke (Spanish, English, Creole English, Miskito...), yet all of the young women arrived with energy, enthusiasm, and a desire to play soccer each day," explained Fellow Katie Petit

As we move further into 2018, we are continuing to lay the foundations for consistent programs beyond Granada through collaborations with organizations like FADCANIC. By providing training, equipment, and female coach role models, we are able to incorporate soccer into their existing community programs, giving girls a unique opportunity to experience the benefit of sports and grow their leadership.

We need your support! Starting TODAY MARCH 1st, we are participating in the Girl Fund Challenge hosted by GlobalGiving. Between March 1-15, each individual person that donates $10 or more to our GlobalGiving project page will count as a vote. The six projects in the Girl Fund Challenge with the most votes between March 1-15 will secure their spot for the year as a Girl Fund project, receiving ongoing funding through the rest of the year!

Please consider casting your vote with a $10 donation to help us continue to build on this progress in Granada and beyond. 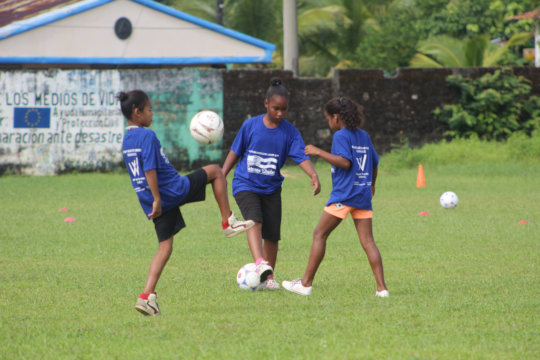 Girls from Raitipura practicing their juggling 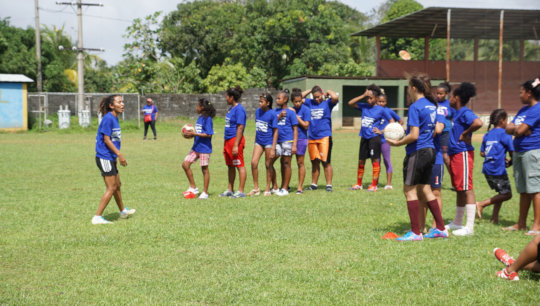 Coach Lisbeth of FSF leads a drill in Pearl Lagoon 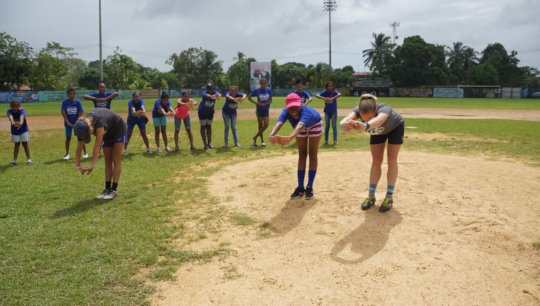 Coach Brittany co-leads a stretch with a player 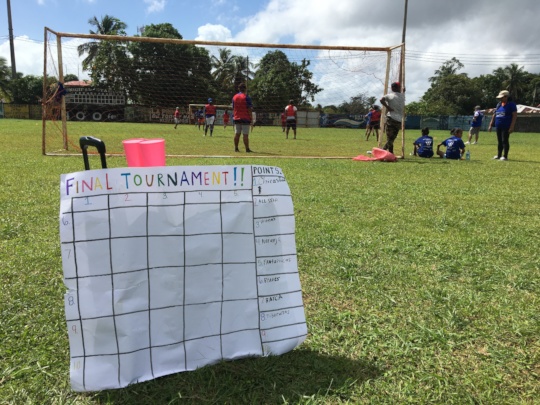 Using the soccer field as our classroom 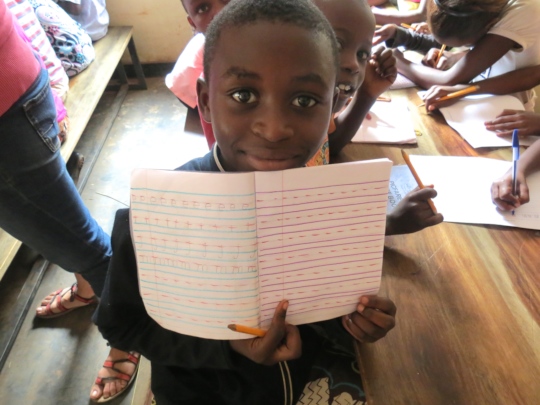 December at SWB Kampala means many things. From squeezing in the last games of the season and competing in year-end tournaments, to taking time to celebrate hard work with teammates, to studying for final exams, our program participants are hard at work both on and off the pitch. And while each of SWB’s six, year-round programs incorporate academic support into their daily activities, the Kampala program stands out in terms of their extensive academic programming which is offered year round to our participants, all of whom are out of school youth.

More than 350 of SWB Kampala’s participants come to Uganda from countries including Democratic Republic of Congo, Burundi, Rwanda, Somalia, and South Sudan. As newcomers to Uganda, many face significant financial, language, and cultural barriers when trying to enroll in formal schools meaning that our program has grown to provide more than soccer practices and games—our staff also facilitate daily academic and life skills classes through our community center, with an emphasis on developing critical English language skills.

What is unique to our classroom however, is that it exists beyond the walls of our community center and continues into a living, field-based classroom—the football pitch! When it comes to supporting the English Language Development (“ELD”) of our participants, we’re able to revisit our classroom curriculum on the field, reviewing key concepts or vocabulary and integrating them into soccer drills and activities that have been adapted for language learning. Students are able to practice their listening and speaking skills as well as try out new words, tenses, or concepts in the safe space created by their team. In taking our learning from the typical classroom and onto the field, we are able to complement traditional classroom studies with opportunities to practice and use those skills in real scenarios.

The warm-up game, “Head, Shoulders, Knees, Cone” is one of our favorite ELD-focused activities that can easily be incorporated into a practice. As coaches shout out parts of the body (“Arm! Foot! Shoulders!”) students must touch that part of the body. When coaches shout, “cone” students then race against their teammates to get a cone. While the drill appears basic, it can also be scaled up for students depending upon their language level. Coaches can integrate new vocabulary (for example: “LEFT arm! RIGHT foot! BOTH shoulders!”) or introduce more complex concepts such as ‘sequence words’ (“FIRST touch your left arm, THEN touch your right foot, LAST touch both of your shoulders!”). Here, Coach Delphine runs “Head, Shoulders, Knees, Cone” for players on our girls soccer team.

As we wrap up the last of our final exams and end-of-season team celebrations, we are already looking forward to the start of a new school year and soccer season. Through individual donations and supporters like you, our program has been able to significantly increase our support for refugee youth in 2017 and to continue to train our mentor-coaches to support our players in developing important English language skills.

With your support, we can continue to provide more than 350 newcomer youth in 2018—5 days per week, 44 weeks per year—with direct access to mentoring, academic and ELD courses, homework help, workshops, and soccer equipment, practices and games, in addition to meaningful opportunities to connect with teammates and coaches. Thank you for Playing it Forward for Soccer Without Borders! 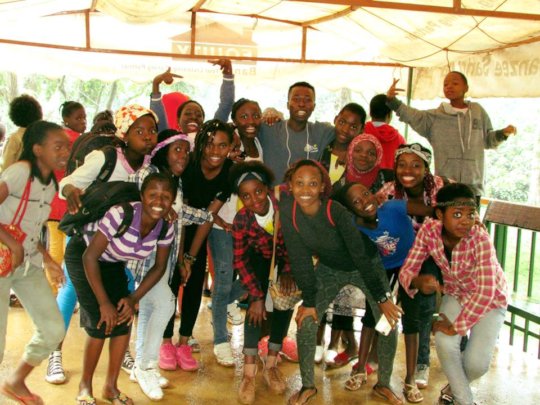 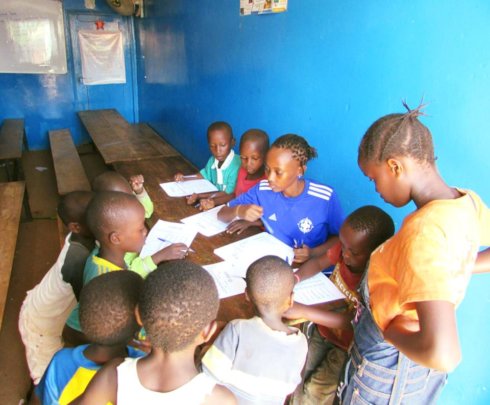 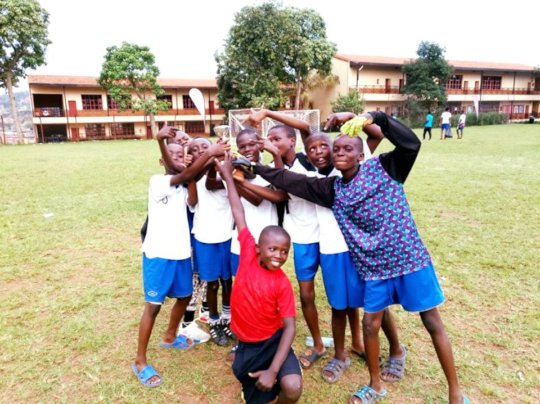 ‹ 1 ... 6 7 8 9 10 11 12 13 ... 22 ›
WARNING: Javascript is currently disabled or is not available in your browser. GlobalGiving makes extensive use of Javascript and will not function properly with Javascript disabled. Please enable Javascript and refresh this page.