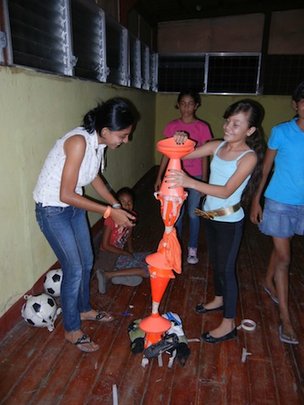 To the dedicated supporters of SWB in Nicaragua,

Since our last update on International Women's Day, the girls of SWB Granada have been enjoying the various activities and events that make up an SWB "season." From team-building activities, to a two part workshop on Entrepreneurship, to a meet and greet with a Nicaraguan National Team player, to iSoccer skills, to as many friendly matches as we could schedule, it has been a very busy few months!

As the season draws to a close, we will welcome back to the US our dedicated Team Leaders, Alex, Alex, and Brittany.  In the last 4 years, more than 150 volunteers from North America and Europe have spent time with SWB Granada. Many have joined the SWB Nicaragua family as a part of our camp program, unique weeks throughout the year where our girls can look forward to an influx of female student-athlete role models, new activities, and exciting team challenges. Others, like these three, have relocated to Granada for a year, dedicating themselves to the program alongside their Nicaraguan peers.

During this time, I have watched these individuals give generously of their time and talents, answer many questions about their lives outside of Granada, and form bonds across cultures, yet it is clear to me that this collaboration is incomplete. For most of these volunteers, this was not their first flight, their first time leaving their country. Many rallied the support of friends and family to make their trip possible via online fundraising or events. Most didn't think twice about having a license to board the plane, a passport to go through customs, or a suitcase to travel.

The challenges of turning the tables, bringing representatives from our Nicaraguan staff to the United States for training and a similar cross-cultural camp experience, are many. The average young adult is just as likely to have an ID card as to not have one. A passport? Even less likely. Once these are secured, the visa process to enter the US as a tourist or on a short business trip is arduous, complicated, and prohibitively expensive (more than a month's pay, for most), requiring several online applications in English (access to computer? to a translator?) and an in-person interview. A far cry from the 30 second interaction and $10 entrance fee going the other direction.

If we seek to truly collaborate on this effort to bring opportunities to girls in Granada, and broaden the lens through which they view their place in the world, we need to break down some of the perceived and real barriers to growth. One such barrier is the feeling of limitation, of being isolated and pre-determined to lead the life prescribed by statistics, averages, and stereotypes.

As such, SWB was determined to deliver a Reversal of Roles: to bring members of our Nicaraguan staff to the US for an intensive Leadership Training in July. Each staff member had the chance to apply, and we proudly extended invitations to two of our female coaches, Veronica and Hassell. Veronica is 24 years old and is arguably the most respected female soccer player and coach in Granada. Aside from her rare perseverance in her soccer career (her team has disbanded more than 5 times for lack of players), Veronica is a college graduate and licensed Psychologist. She divides her time between her clinical work and working as a Team Leader with the SWB Estrellas, girls ages 11-15.

Hassell's transition from participant to Team Leader marks a program milestone. Hassell is 20 years old and discovered her love for soccer late in her teen years but dedicated herself immediately. Upon aging out of the program, it was clear that she was meant to stay a part of it, and has been an invaluable member of the Mariposa coaching staff, working as an assistant Team Leader for girls ages 7-11.

Hassell and Veronica began the lengthy process of acquiring passports, filing a 7 page visa application, securing an interview slot, practicing for the interview, memorizing their itinerary and supporting documents from SWB, and heading to the capital for their interview. Both were denied.

The reasons for this are complicated, and overwhelmingly political. To oversimplify it to unfair or frustrating is to ignore a long and complex relationship between nations who have been intertwined for far longer than SWB has existed. On one hand, the denial is a setback, as this training would have be invaluable to Hassell and Veronica's growth as leaders within the program. That we will seek to overcome with continued in-country trainings and leadership opportunities closer to home.  On the other hand, it is a reminder that there are very real, structural barriers that our girls face if they seek to change norms.  Skills of self-advocacy, mediation, critical thinking, and problem solving will be crucial in that change; it is a challenge to us and our youth-serving counterparts to emphasize and teach these.

Thank you, as always, for your support and commitment to our girls in Granada. As our spring season comes to a close this Saturday, we are anxious for the season that lies ahead. The road isn't always without bumps and turns, but resilience doesn't come any other way!

If you are considering making another contribution to our program, please consider doing so today, a Global Giving Bonus Day! All donations today (June 13th) will be matched by funds from Global Giving. 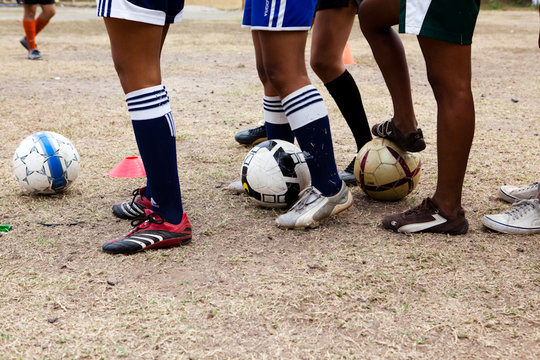 Today marks the United Nations' 101st International Women's Day, and the fifth celebration of it by Soccer Without Borders in Granada, Nicaragua. On March 8th, 2008, forty-eight girls ventured out onto the Granada field, curious as to the intentions of these American and Nicaraguan women challenging them to become athletes. The girls were broken up into groups of six, each with their own coach, to discuss a few simple questions, among which were: Can you name a Nicaraguan female soccer player? A female soccer player from any country? Any female athlete at all?  Of the eight groups, only one could name a single female athlete (tennis player).

The results were unsurprising. A 2011 recent study of Nicaraguan girls and sport revealed:

Today, the girls of SWB Granada have had the chance to build personal relationships with more than 150 female NCAA student-athletes, have been trained by professional players and NCAA coaches, have cheered on their Nicaraguan U-20 women's national team in person, have played on the turf in their national soccer stadium, have competed against girls from the capital, Managua, and beyond, and have witnessed their peers graduate out of the program and be welcomed back as coaches.  Most importantly, they have inspired and supported one another to overcome barriers, break molds, and grow together toward their goals on the field and off.

Thank you to each of you for your past support, and for continuing to invest in us in 2012. We hope that you will join us today in celebrating five years of "sonando en grande" or "dreaming big" with the girls of Granada. 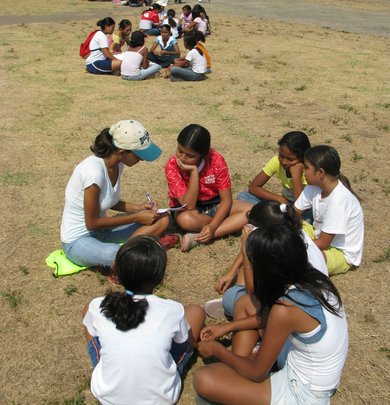 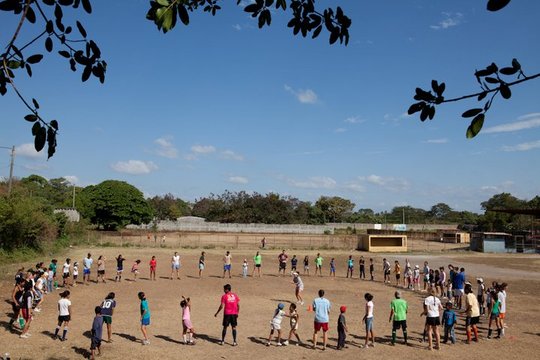 With the holidays approaching, SWB Granada just wrapped up weekly programming for what was truly an incredible year! Before 2012 is upon us, we wanted to share some highlight stories and photos from throughout 2011:

January- 4th Annual TEAM Camp: Current and former NCAA student-athletes came together with SWB Granada for a week of team-building, soccer and cultural exchange.  Program participants and international volunteers spent the week playing soccer in the mornings and taking part in afternoon challenges at our community center that encouraged participants to express their individual and team identities, communicate in creative ways and show their SWB pride.

February- 1st official Fútbol Sin Fronteras matriculation and season kicks off.  Over 100 girls registered for three teams: Las Mariposas (7-10 year olds), Las Estrellas (11-12 year olds), and Las Nicoyas (16 & up) and the three groups spent the first weeks of the season exploring the concepts of team with goal-setting, team-building, and contract signing.  Coaches and leaders also spent the first weeks of the new season making visits to each participants home to meet their families.

March- FSF held a workshop to educate our older participants about HIV/AIDS.  The afternoon included icebreakers, discussions, a presentation and a question and answer session that touched on many topics ranging from the stigma surrounding HIV/AIDS to prevention.  Later in the month, all parents and families were invited to an open house at our community center in which participants and staff played host, giving tours of the building and performing in a talent/culture show.

April- Two FSF teams, Las Nicoyas and Las Estrellas, began competing in la Liga de Amistad, a coed soccer league in Granada that ultimately grew to over 20 teams.  The FSF teams represented two of four girls teams participating in all of the league and meant the first ever official soccer games for many of our participants.

May- The 2nd Annual Spring Infusion brough an influx of energy, ideas, and new faces to Granada to close out the season. Spring Infusion volunteers capped off the week by playing a friendly match against the Nicaraguan Women's National Team in the National Stadium in Managua. Granada program participants, staff, and parents filled the stands, cheering on both sides.

June- SWB Granada Advisor Ann Cook is featured in the State Department's DipNote Blog for a series of coaching and youth clinics she led in various cities around Nicaragua in partnership with the US Embassy of Managua.

August- The program in Granada welcomed three new long-term interns, who would work alongside local staff members for the next 10 months.

September- The fall season kicked off with a new round goal setting and house visits for all three age groups.  Coaches created and implemented a theme for the duration of the season, "Soñando para ser mejor (Dreaming to be better)."

October- Women Win, an organization that uses to sport to advance women's rights throughout the globe, made a site visit to Fútbol Sin Fronteras as part of their larger "Girl Power through Sports" Workshop.  Earlier in the same week three members of the FSF staff were able to travel to Managua and participate in the workshop that discussed girls' access to sports among other pertinent topics for the program.

November- FSF co-hosted its third annual Global Peace Games for Children and Youth along with American Nicaraguan School in Managua.  Following an opening ceremony that aimed to highlight to the over 200 youth participants the pivotal role sports can play in achieving peace, a day-long soccer tournament was enjoyed by all.

December- The lessons and theme of the season culminated in a mural painted on the wall of a local school.  Participants and coaches worked together to design and paint this piece of art that can be enjoyed by the entire community.

Thanks so much for your support, and we look forward to an incredible 2012! 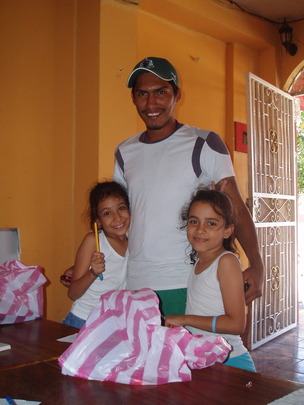 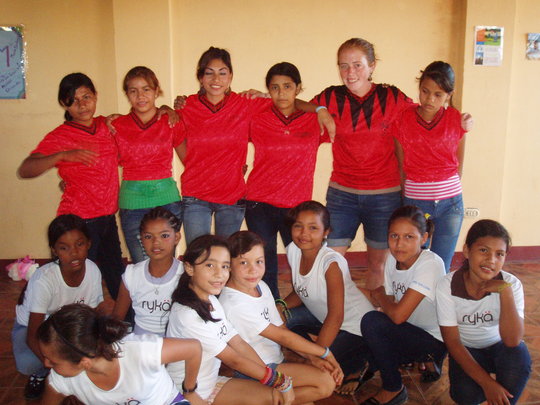 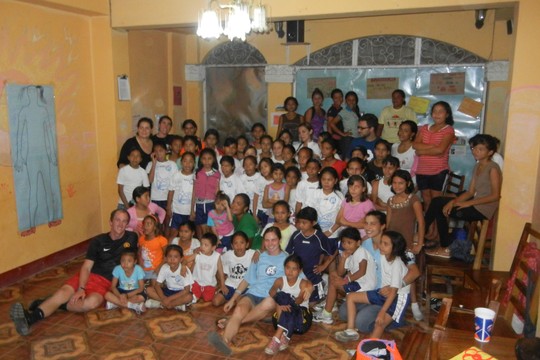 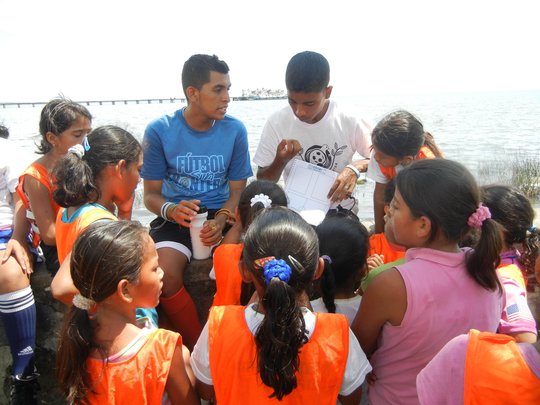