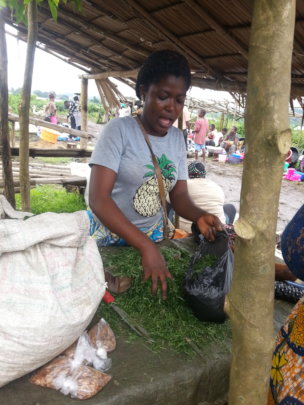 Joy at her business place

Doing business in the middle of a civil war is really challenging. This is the case in the North West and South West Regions of Cameroon in particular. The economy seems dangling, with the numerous “Ghost towns”, curfews and lockdowns. However, monthly site visitats and strict follow-up of book keeping show that over 70% of program participants this month are showing improvement. They are gradually standing on their feet whereever they find themselves. Some have been displaced from Tole to urban centers like Buea and Limbe. They moved out again due to the weak economy of the village and the increasing insecurity.

“I am so grateful to be a beneficiary of this program” says Esua, one of the beneficiaries. “Despite the challenges I faced in Tole such as constant harassment from the Military and non-state armed groups, slow business turnover and lack of education for my children, and the ones I am facing here in Buea as a “refugee” [she is actually an internally displaced person, but they refer to themselves as refugees], I still have something to hold on to. My business for which you gave me the capital. Life is not easy here in Buea. I have left my own house which I had furnished and equipped well thanks to this business. I was able to join hands with my husband and we built our own small house in Tole.  Due to the crisis, we were forced to move to Buea and rent again. Here in Buea, while my husband struggles every day as a taxi man, I move from market to market to do my business. Though it’s so stressful and tiring, I don’t regret it. My children go to school here, unlike in Tole where they had stayed out of school for 2 years because of this crisis.

“This crisis is like a bad joke” said Joy, another beneficiary based in Tole. She has been displaced and came back on several occasions in the past year and a half.  Despite the slowness of economic activities, she stood her grounds in Tole. “People must eat” she said.  For more than a year she has been doing buying and selling of food stuffs with your support. (You can check her out in the project video, which was recorded about a year ago.) She is today one of the major suppliers of Eru in Tole. Though there is no school going on in Tole, Joy is able to send her children to other places like Douala to continue their education. No matter how many times she runs to other areas for safety, she is comfortable coming back to Tole, where she has mastered the market and has a great network of clients and a sure source of income.

Like her, hundreds of thousands of men women in this conflict area have managed to navigate life or death environments with multiple armed actors. They carry out normal business activities that help keep the living standards in their communities.

Thank you for supporting them. This month we will be expanding the program by supporting 40 new displaced women living in Buea and Limbe, and 20 from Ekona, another conflict-affected area where Reach Out carries out humanitarian activities (Food Distribution, Water Hygiene and Sanitation, and provision of services for victims of Gender-Based Violence), the 20 girls have been identified from these different programs. We will keep you posted. 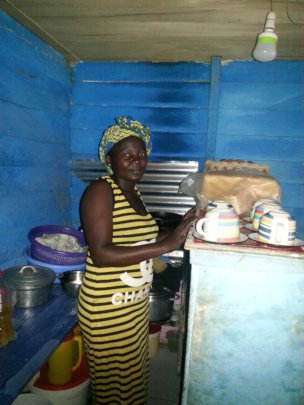 Claudine in her Restaurant 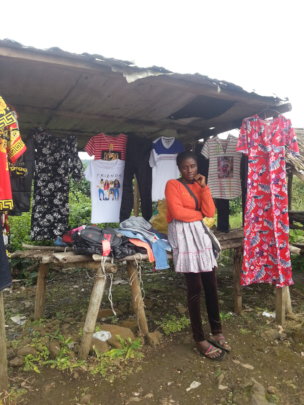 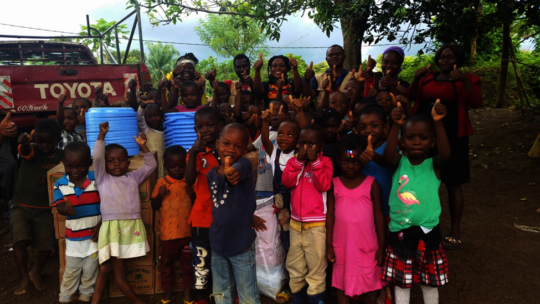 Four staff from Reach Out NGO visited the Mah Di’s orphanage on Friday October 11, 2019. The aim of this visit was to donate basic household items and pay the school fees of some children. The following items were donated:

When we arrived at the orphanage, most of the children were in class studying. The Founder and some of the smaller children and the class on break welcomed us by singing songs and some recited short poems for us. We were given the opportunity to visit the children in class and get to talk to them briefly on our mission to the orphanage and the usage of the items brought. ‘’We feel delighted to receive you today and we are very grateful for these items you have brought’’ said Joy, a 10-year old pupil. The project of the school is expanding with 65 children from the neighborhood enrolling to study there. “Thanks to the enrollment of other children from outside, the orphanage is able to meet its objective to carter for the less priviledged’’ said Mah Diana, the Founder. We then preceded to hand the items to the Founder and some of the younger children who were on a short break.

We were made to understand that the orphanage is now referred to as “Mah Di’s Center for Children in Distress”. Despite the successful running of the school, the orphanage is in need of support to adequately pay the staff monthly and funds to increase the number of staff from one teacher to two teachers per class. They also still need a lot of support to cater for the children in the community as the orphanage now assists a blind lady by name Bih and some vulnerable persons.

We were taken to the project sites and the number of pigs have reduced from 35 to 25 due to an epidemic but the founder said they are hopeful to sell the remaining pigs in December to make up for the lost encountered.

500 birds were bought in the poultry farm and within a short period, they were sold and more birds and feeds were bought. So far, the poultry farm is expanding and Charles, the oldest orphan, has taken complete charge over the farm ensuring that all goes well. The orphanage is one of the biggest suppliers of chicks in the neighbourhood.

Unfortunately, the orphanage had seven cows but some died before it could be sold, just about 4 were sold. According to the founder, they experienced some losses.

The bigger children are in charge of cultivating the vegetable farm which they sell when the market price is high and consume internally when the price is low.

These income generating activities still remain one of their biggest sources of livelihood. Particularly because given that with the on-going civil war visitors who use to donate gifts have reduced their visits. The founder was so happy and extended her gratitude to REO and its partners, and prays God to continue to bless the entire team for the endless support to see that the children are happy. She said thanks to the items donated, she will divert the money she could have used to buy the items to buy other necessities for the children 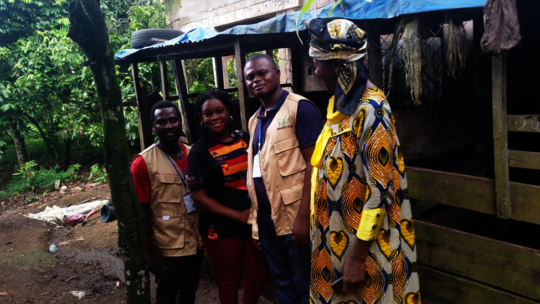 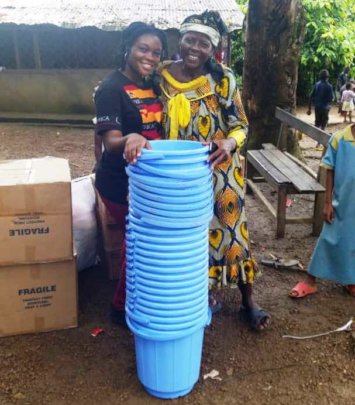 Handing of gifts to Orphanage Founder 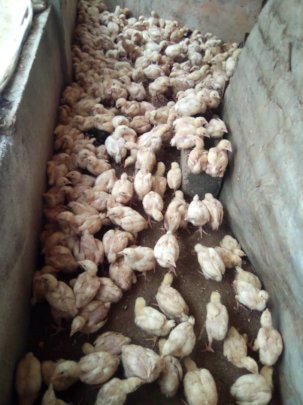 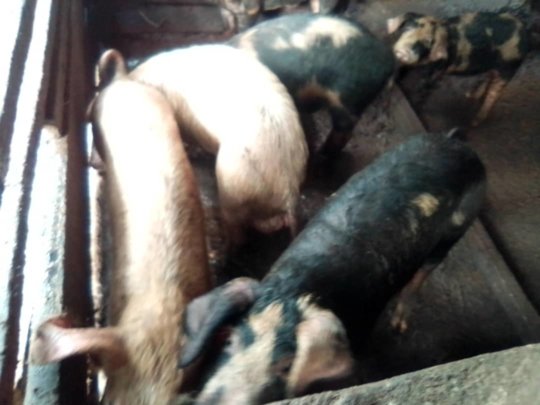 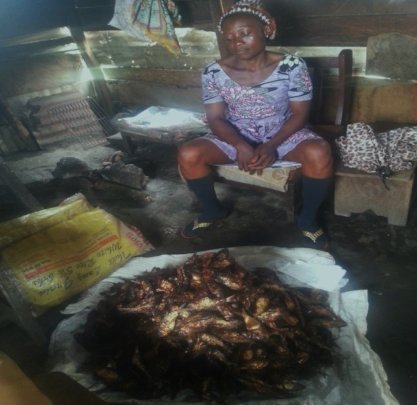 Shirlie with some of the fish she smokes and sells

Due to the ongoing crisis in the North West and South West Regions of Cameroon, many women and girls have become much more vulnerable than before. Hundreds of thousands of women have been internally displaced thereby exposing them to all form of exploitation. It was on this note that Reach Out NGO decided in July 2019 to train 10 vulnerable women who have shown interest in business on how to maintain a successful business, bookkeeping and the advantages of savings. And most importantly, gave them grants to start their businesses.

Among these new beneficiaries is Shirlie who recounts her life in the bush in Munyenge, one of the most affected villages in the South West Region.

"I used to sell cooked food in Munyenge. But things turned sour on the 1st of October 2018. The military stormed our village in search of Non-State Armed Groups. Everything of ours was scattered including the food in the flasks i was selling, and we all ran to the bush without carrying anything.

Life in the bush was frustrating and challenging. We lived in a cocoa oven for this period of time. [Picture of a sample cocoa oven in the gallery]. We were 35 of us living in a cocoa oven. It was like a whole society comprising of babies, adults and the old. There in the bush there was no boundary as to who owns what. Anything that was eatable we took and ate, not minding who owns it. Plantains, plumps, tubers of people we don’t know became ours. We mostly roasted all these because we did not carry pots. Young women like me were mostly the ones looking for food because our young boys were at risk. The military targeted them and killed them claiming they are “Ambas” [members of the insurgency groups]. As for water, you don’t drink because the water is clean but because you are thirsty. Any liquid was drinkable in the bush. We drank it not minding the smell or colour. As for medication, herbs and tree trunks helped us so much. Without any proper diagnosis, our parents and grandparents living with us gathered herbs and tree trunks and boiled for the sick to take. Most at times they just assume is malaria or typhoid that one is sick of.

My family and I stayed in the forest for over 7 months In March 2019. A friend of mine who had ran from Munyenge asked me to come to Buea and start anew. Unfortunately, things did not turn out as planned. Living with my friend’s brother was not really easy. I was not doing anything to contribute to the welfare of the house. One day he told me that he wants me to be his girlfriend which I refused, this resulted to problems in the house. I could not do anything freely and was always uncomfortable. It came to my mind that I should look for another place to stay. So I complained to my aunty who is married to a pastor and have been displaced too from Muyuka to Buea. Though their house too is saturated she begged a neighbor of hers here to lend me this place where I am presently. I have been living here with my son. Unfortunately, the people I stay with say he disturbs a lot and eats a lot. To avoid problems, I sent him to my mother, who has successfully left the bush and is also in Buea. I have longed to have something stable doing since I came to town. Since March 2018, I have been doing manual jobs like tilling the soil, weeding people’s farms for money. Thanks to one of such jobs that I was able to have 5000 francs [8.5 dollars] to bring my son to Buea.

Being one of the beneficiaries of this program gives me hope and joy because with this my new business, I can rent a room of my own, be able to cater for my children and my parents. I also intend re-starting my food business when I have enough capital. "

Thank you for being there for her. 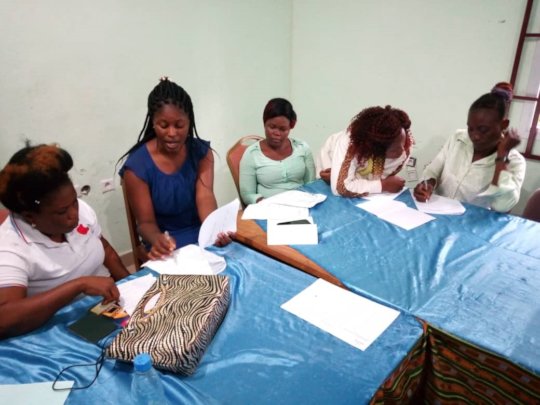 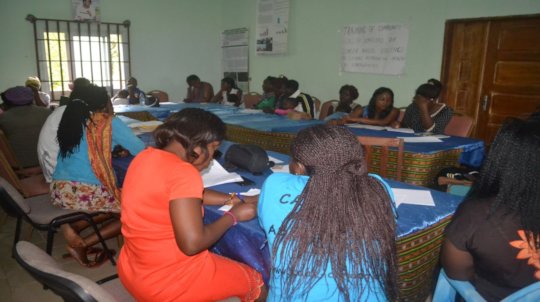 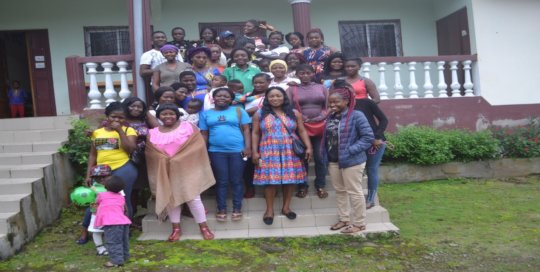 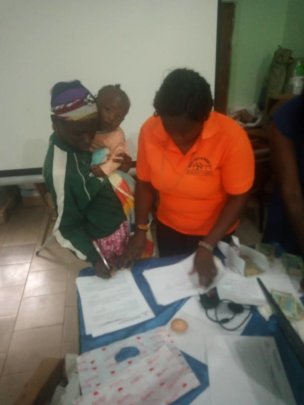 Awat during training with her baby 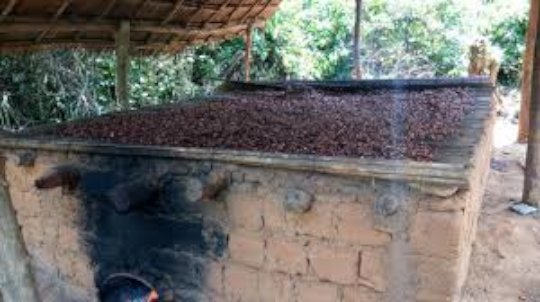 An example picture of a cocoa oven
‹ 1 ... 3 4 5 6 7 8 9 10 ... 43 ›
WARNING: Javascript is currently disabled or is not available in your browser. GlobalGiving makes extensive use of Javascript and will not function properly with Javascript disabled. Please enable Javascript and refresh this page.