THE STREET OR BACK TO MY FAMILY? 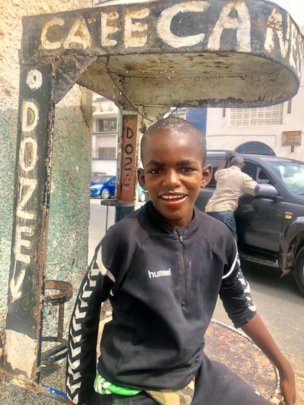 His name is Malick.

Eight (8) years in the street and almost two (2) years at the center Chance for All Senegal, which gathers, directs and serves, as a home for children from disadvantaged backgrounds and talibés, here is the decisive choice: find his parent or stay on the street, which he has always known.
Malick, aged 14, has been on the street since he was four, the day his father left him under the “skirts” of a Daara marabout in the city of Saint-Louis (Pikine).

Malick is a street children like no other. He always takes care of himself with the money he makes in his long days traveling around the city of Saint-Louis. He is a soccer lover, his love for soccer makes him always dressed in the jerseys of the national team. Of his habits, Malick prowls around the hotel next to the post office (Hotel de la poste), the hotel Residence and can earn up to 700 francs the day. With the little French he knows, he sometimes serves as a tour guide. He helps tourists make money change by taking them to the ideal places or by interpreting the local language, shows them the city he knows as the palm of his hand, from the cultural center, to hotel de poste and the walks under the "takussanou"(Evening) Ndar along the bridge.

From this activity, the boy meets "toubabs"called Fred and Nancy that led him to discover warmth and hope at Chance for All Senegal since he set foot there, one day, in March 2017. The change is not about to stop there for Malick. His stride at Chance for All Senegal was the beginning of finding his family. For a child as remarkable as him, to leave him, still, at the mercy of the street was not conceivable for his new friends, family.

In a desire to reunite him with his family, The local staff at the association in collaboration with other association in Saint-Louis lead inquiries and make their way back to his hometown.
After days and days, visiting several concessions, using photos that did not betray paternal traits, they found Malick's father. Actually his father lives in Daara Djolof.
In an interview with that latter, he confides to having left him to a "Serigne" of Daara when he was four (4) years old. Time passes, he loses contact and for not having set foot in the same place for a long time, he loses sight of his boy, who had no memory of where he came from.

The father is happy and eager to be back under the same roof with his son but this is not Malick's enthusiasm. When one learns to live at his own expense soon enough the family cocoon can represent the bird’s fear of the cage: being deprived of freedom, afraid to no longer fly high.
Malick fears that he will no longer be able to make money to support himself and be a burden to his dad.
Thus, the question of gaining his family or remaining in the life he has known since his four (4) years, with the new family he has made, remains unresolved.

What would you do instead of Malick? Compromises ? 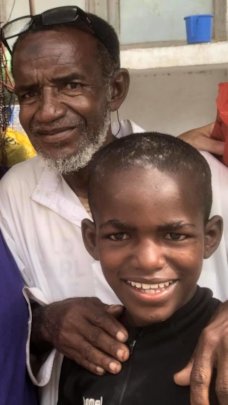 "Struggling for better Nutrition and Education" 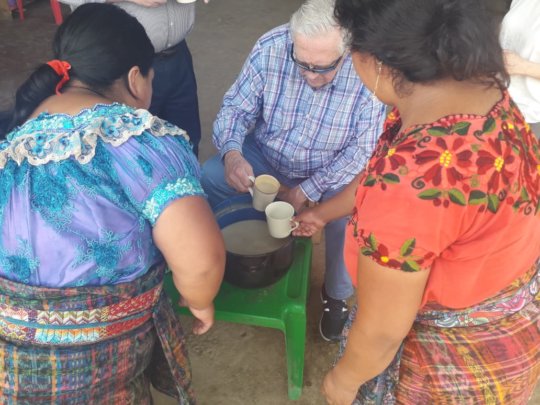 Helping to serve the nutritious drink

As we have already told you in our past reports, the nutrition program is sponsored by the Mathile Foundation, which provides consulting services and a fortified nutritional drink containing proteins and 21 essential vitamins and minerals; better known as CHISPUDITOS for our children.

Last month we had the pleasant visit of two members of the Mathilde Foundation (Clay and Tim), who visited the school of Los Izotes in San Juan Sacatepéquez; the objective of the visit was that the members of the foundation and the team of chispuditos knew how both education and nutrition programs work in that community, and how the mothers support the preparation of the atol, as well as the children consume it daily .

The teachers Lidia and Margarita who work in this community, the children gave them a very good reception. They showed a model class to Clay and Timothy with the theme of Animal Classification, read a story about animals and last they made an animal with recyclable material, which greatly amused the children.

When the meal was over, the mothers prepared the drink, Clay and Tim served the children their atol as well as the supplement, which was a peeled orange with a ground nugget.

In the end the teachers, the children and Fred expressed their gratitude for the donation made by this foundation with the drink Chispuditos.

It was a very encouraging visit both for Lets Be Beady and the program CHISPUDITOS as it was more closely appreciated as the children enjoy their atol and how this helps them in their education.

"As a teacher, I have experienced how this nutritious drink (Chispuditos), during these two years of testing has helped our children to be more ready and prepared to learn and have a better nutrución. I think that in the most rural communities the advances of the children have been more noticeable because the boys are more prepared to be successful and to be healthy "

An image describes more than a thousand words, so in the photos below you will appreciate more about the visit and the activities described above (sorry for the definition of some photos)... 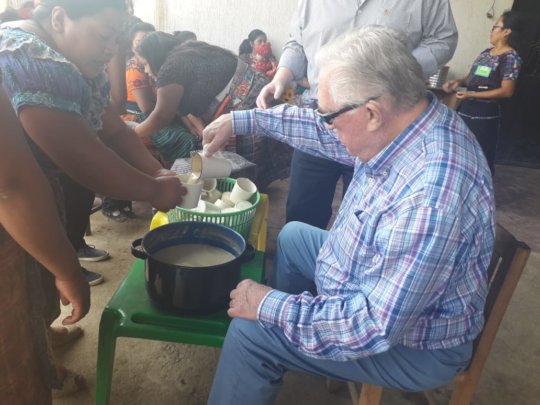 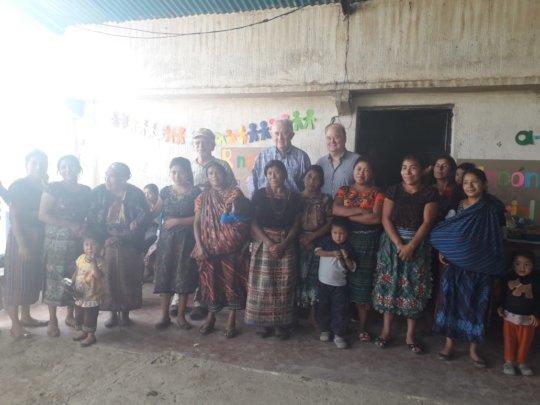 They are the mothers who prepare the atol 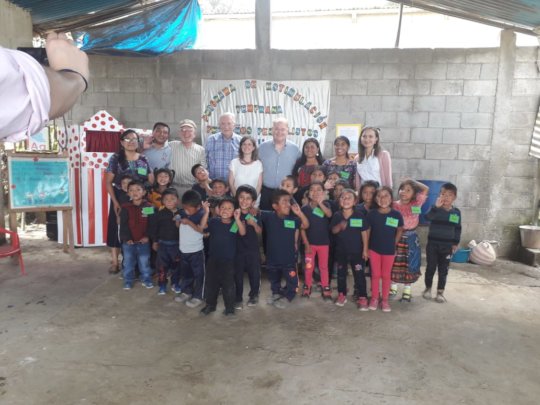 They are the children of the Izotes 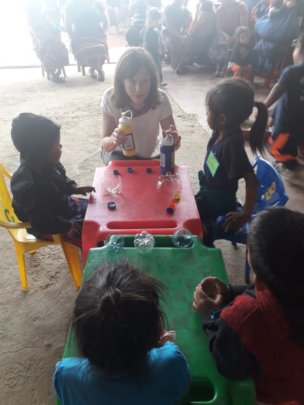 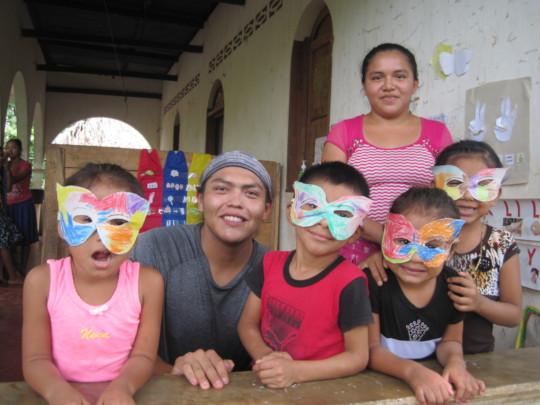 Aula Mágica, New volunteer to the program, May 2019

Hello, my name is Gabryl Sam. I am a volunteer with Aula Mágica (Magical Classrooms). In the fall of 2017 I graduated from Northern Arizona University with a Bachelors of Science in Environmental Sustainability and an emphasis in Global Sustainability. I am a Native American from the Navajo tribe. Growing up on the Navajo Nation as an indigenous person I feel the importance in helping other indigenous communities. After being in Guatemala and visiting classrooms in the rural areas I have seen first hand the importance of these classrooms.

On two separate trips we managed to visit five different classrooms in the department of  Retalhuleu and Quiché. Some classes were held at a formal school and the others were held at a member of the community’s house. The teachers are really making an impact to better their community, they are young, bilingual in both Spanish and their indigenous language, so they can communicate with the children. After seeing the children with their smiling faces eager to learn, I knew at that point that this was something special. In Magical Classrooms, we strive to assist children with fun interactive activities that will stimulate their learning. The classes will last no longer than two hours each day, Monday through Friday. In the classrooms we use different techniques from visual, auditory, and kinesthetic learning. What we focus on with the children, to name a few, is knowing their ABCs, numbers, shapes, and colors. We do this by reading to the class, singing along to music, arts & crafts, and social interactions.

From visiting and traveling far into these rural indigenous communities, I have seen first hand the need for schools in these areas with high levels of poverty. With the lack of government support in these communities it is hard for children ages 4-6 to have a basic education before the 1st grade. Magical Classrooms assists children in the crucial time in their life to build the foundation to succeed further into their education. 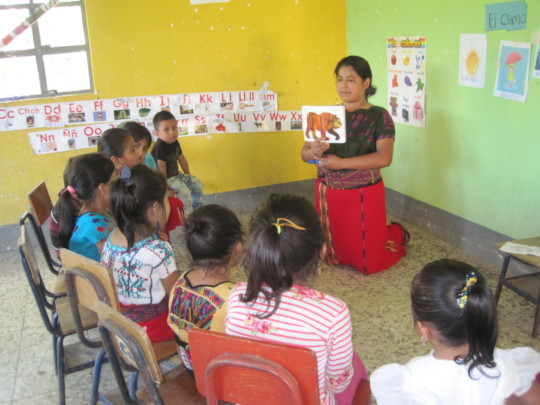 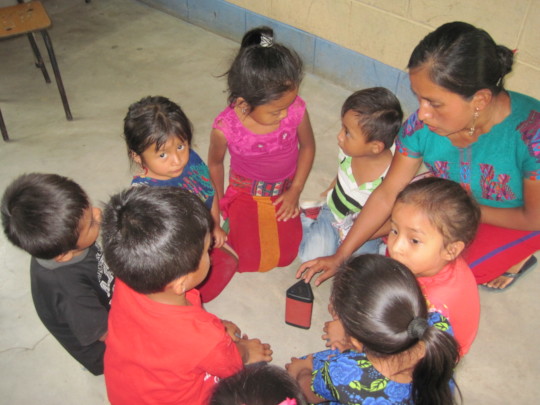 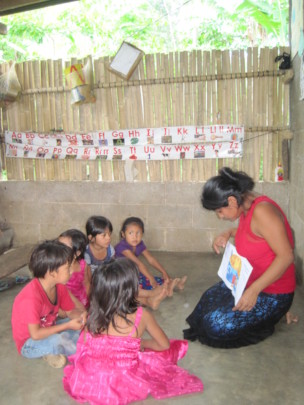