New challenges in our life 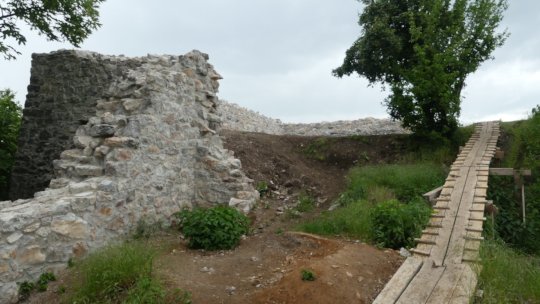 .In the last report, were were looking forward to meeting in March as usual. Unfortunately, Covid-19 overwrote our plans as every event was cancelled to prevent the spreading of the epidemic. During the quarantine, all of us had to get used to the new circumstances and continue the project at home. Let's see what have our members done!

First of all, the saddest moment of the year so far was when we had to cancel the "Save the Castle!" days in March. During this event, there would have been our annual general meeting which was postponed due to Covid-19. As time went by, we decided to organize a digital voting on last year's reports instead of meeting by person. In general, there is a Skype.conversation in the beginning of every month whose role have been enchanced in this new situation. We have used all kind of digital platforms to keep in touch and prepare for a better future.

Our next important project is to design and create new types of T-shirts, baseball caps, fridge magnets and other small objects with the images of our association and Szadvar castle, which can be given to people who decide to donate some amount of money. Also the completion and refreshment of our little publication is due recently, but fortunately, the preparation work can be done on-line.

In February, we informed our Donators that a new article about our activity is set to be finished. We are glad to tell that the article was published also in English language on the page of Hungarian Archaeology, in the issue 1 of 2020. (see the link bottom)

One of our members decided to renew the information board standing near to the castle, so he repainted the wood frame. The board looks like new again!

We are pleased to report on the reconstruction works of the National Castle Programme, which are going really well. As the situation became safer, some of our members visited the castle all alone, and wrote reports and sent photos of the actual state. All of us were truly happy to see our beloved castle awakened.

Now, it looks like that we can organize the excavation week in August, so the preparation process has started. We hope that there will be at least as many enthusiastic participants as in the last few years. Let's see! 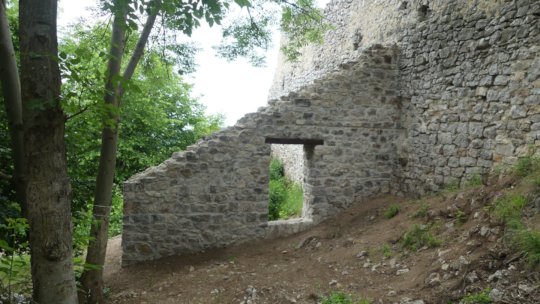 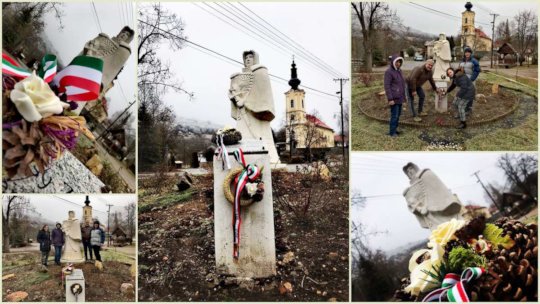 In the last few months, so many little events and programs were organized by the members of Szadvar Castle Association. During the winter months, it is more important to keep in touch on-line, because we can not meet in the castle phisically. Last October, four new members joined our group, who started to take part in organizing programs, searching for new possibilites or writing applications.

We are looking forward to meeting again during the "Save the Castle"-days, but we should wait till 27th of March. Until then, we should make preparations for this event, especially because based on preliminary information, around 25 volunteers will join then. There will be an annual general meeting, where we will discuss and accept last year's working reports. Usually, this event takes place by 15th March, but this year we chose to postpone it to the end of the month in the hope of the better weather.

On 14th January, there was the 453th anniversary of the battle of Szadvar castle. To pay tribute, some of our local members decided to place a wreath on Zsófia Patócsy's statue in Szögliget. She was the heroine commander of the castle during the battle.

Last October, we were glad to welcome Karen, alumna of the Central European University, who wrote her thesis about voluntary works throughout Europe. She decided to involve Szadvar Castle Association in her writing, and kindly chose to meet us last year. This January, she offered us a great possibility: to take part in a podcast made for the Medieval Radio of CEU. She held a brainstorming about her ideas where some of her colleagues and our members discussed the structure of a similar event. Karen will join us in March too, where she starts realizing her idea.

In the last few weeks, our members were asked to make a presentation about our work on a national conference, as well as to write an article about it to the online issue of Hungarian Archaeology. The article has already been sent to proofreading, we are looking forward to seeing it finished.

Our next adventure will take place in Szögliget, where we will meet for the 28th time and make preparations for the National Castle Programme. Let's meet up there!

Saving the Pulley in the nice fall 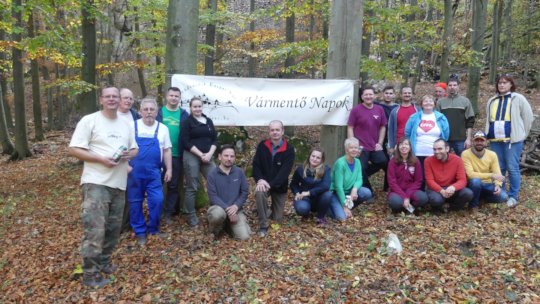 First of all, let me introduce the Pulley of Szadvar. It was mentioned in the castle inventories (inventarium) in the 17th century that the peasants had to serve “…with 2 horses at the Pulley…” as part of their obligation to their lord. It meant that they had to operate the pulley which was used to pull up the water and other contributions, tithes from the village to the upper castle. Thus, the pulley served the inhabitants of the castle for centuries as the lower station of a medieval elevator.

Now, the partial reconstruction of the lower castle will be realized as part of the National Castle program, and it will serve as the main entrance to the castle in the future. Friends of Szadvar offered the help to clean the area and prepare the ground for the construction works.

The team of volunteers gathered in the beautiful village of Szögliget on a Thursday night on 24th October, 2019. Old friends were greeting each other with great pleasure and there were new faces as well. We were happy to have a volunteer from England, who had been working on her thesis on volunteering by the way. Also, our association has become stronger this weekend by joining 4 new members!

Next morning, after the fog had risen, the still energizing autumn sun had found the team in the lower castle. After the mandatory safety training and administration, the work had begun. The goal was to make the ground even and plain next to the walls for the scaffolding which will be built for the construction. Everyone had to wear a helmet, the old walls did not seem to be stable and safe anymore. That is our mission to make it a safe place for children and families who will be visiting the castle in the future.

The work had continued the next day, too. Since it was not a working day, even more people could join the volunteers, it was again more than 20 people working in the nice fall weather, the leaves were gently falling on the dry ground making a tiny noise which made the people calm and somehow feel at home…

It was also part of the task to create easy access to the castle for the construction workers. For that, some of the team were cleaning the path from leaves and rocks, someone was building a spectacular stair out of the rocks. Soon these pathways and roads got funny names after their creators, like “Great Lajos promenade”, “Zoltan's stairway” or “Hairpin curve of the Castle Saviors”. Apparently, you have to have some fun when you have to work hard and physical.

The top of the cake – literally, too – was the lunch served by the “Chef of Szadvar” as a tradition now. Everyone got a piece of the Hungarian specialty “langos” and the local specialty “Szadvar kelgyo” (which is similar to a hot dog in a spiral of a langos). It was then crowned by sweet mignons which is a rare treat in the middle of the forest.

We were really grateful for this nice weather and beautiful weekend for everyone joined, and for everyone contributed just like you. Thank you for your generous help! 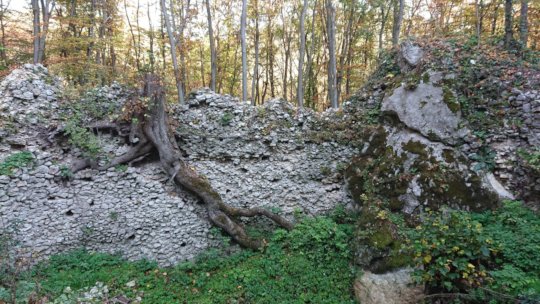 Tree in the wall of the Pulley (will be removed) 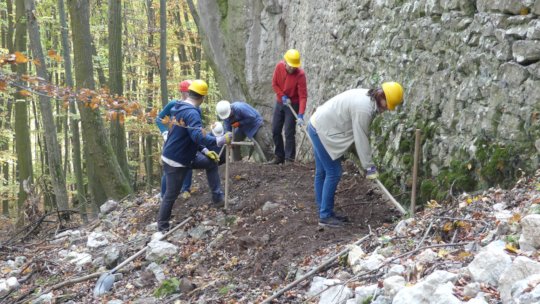 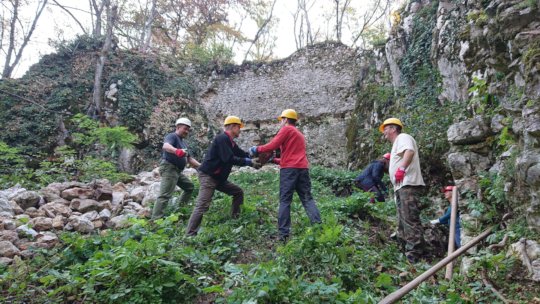 Chain of volunteers "on the rocks" 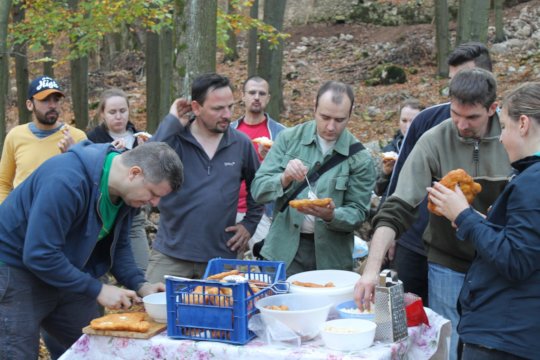 Treats from the Chef of Szadvar 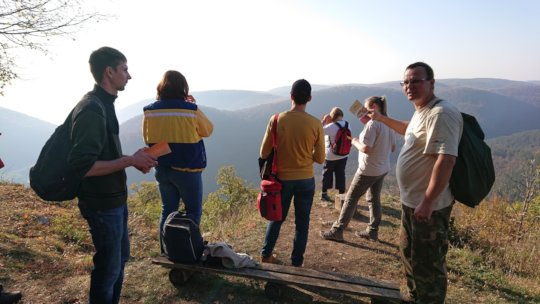 Guided tour for the new friends 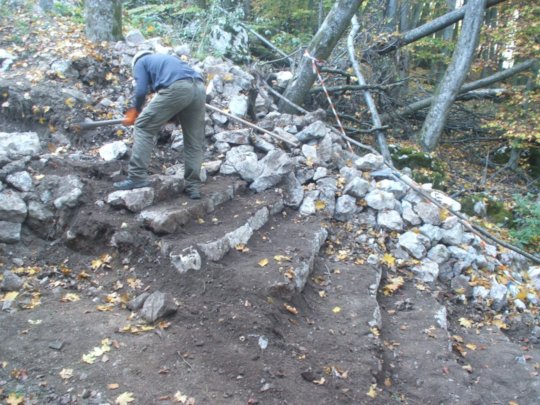 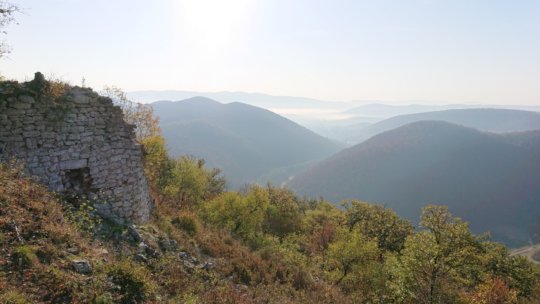 Nice fall in the peaceful Szadvar
1 2 3 4 5 6 7 8 9 ... 14 ›
WARNING: Javascript is currently disabled or is not available in your browser. GlobalGiving makes extensive use of Javascript and will not function properly with Javascript disabled. Please enable Javascript and refresh this page.