In October 2012,  Asia America Intitiative's (AAI) Cancer Treatment Program for women and children in the Philippines began its second year of continued progress. During 2012, fifteen of the thirty original women patients were diagnosed as free of cancer after undergoing chemotherapy provided by AAI with the support of Global Giving donors.

Among the women whose lives were saved include a 51 year-old mother of two high school aged children, Lourdes Bilason. When she found out that she had breast cancer in 2011 she recalls, "I felt so hopeless and afraid that I kept on crying every night. My husband and I don't make enough salary that would allow me to afford medical treatments. There is a history of breast cancer in our family, I could not do anything to stop it."

In desperation, Loudes went to one of the oncology treatment centers that provides service to impoverished persons, which is also a partners of AAI where we provide medicines from inernational donors for no cost to patients. There she received a biopsy which confirmed she had a stage 2 cancer which required surgery and chemotherapy.

"I was crying and felt very hopeless. I was really praying and my only strength came from my family," said Mrs. Bilason

She registered in AAI's program and began to receive Tamoxifen. After one year of treatment and , she said, "I felt better and then I was diagnosed as cancer free."

Her doctors are keeping the monitoring of her condition and AAI is continuously helping her with nutritional care as she recovers from the treatment and its complications. Her advice to other women is "do not be afraid to be checked up on a regular basis because there is a medicine that can help you survive and prayer is also powerful."

"Thank you to AAI, to the kind people from Global Giving and to the wonderful doctors and nurses who helped me."

Although 15 women, including Mrs. Bilason's have overcome cancer through the AAI program. However, there are still fifteen other women in the program who are continuing their treatment. These women still need financial assistance for their treatment and to help AAI cover the cost of shipping medicines to the Philippines from the US and Europe. These women consider AAI and the Global Giving donors as their only source of hope as they are also having financial difficulties to support their families.

For instance, Mrs. Primitiva Sanchez, 53 years old with two children, was also diagnosed to have a breast cancer. She's been in treatment for 13 months. Although she's showing improvement, she's still has not completey overcome the illness.

"The Tamoxifen given by AAI has helped me to feel much better. I am very happy. Before, I was almost crying all the time. I feel so depressed. I thought I would never overcome the illness. But God has sent good people to help me with my medicines which are helping me to recover. "

As we begin the year two of the Art of Hope and Helaing Program, it is our intention tat Asia America initiative to do our best to provide the medicine to the doctors and nurses who continue to assist patients like Mrs. Sanchez to become fully healed. But we cannot do that without our donor partners from Global Giving. Pharmaceutical companies have responded by contributing close to 1 milllion dollars worth of medicines for women and children who are suffering from the life threatening illnesses. We are very grateful to them.  And we humbly ask Global Giving donors to continue your generosity. 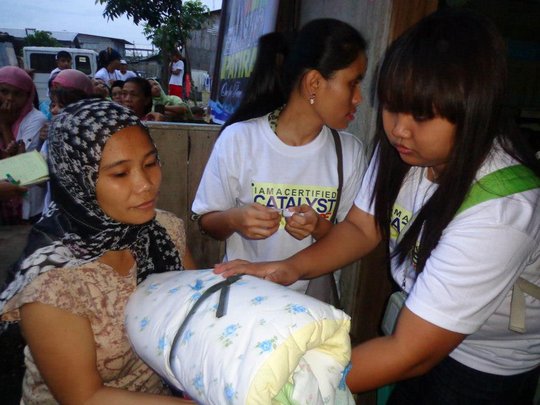 As of October 15, 2012 the typhoon floods of August 2012 in Manila, Philippines and surrounding communities continued to be a source of misery and suffering for thousands of families.  With assistance from GlobalGiving's disaster relief fund for the Philippines, Asia America Initiative has continued to partner with emergency relief teams from the Philippine military and collegial NGOs to provide protective clothing, medicines and blankets for epidemic prevention.

Communities sustained by AAI and our donor partners include Quezon City, Taquig, Marakina and Laguna.  Water from overflowing dams and river beds in many areas remains ankle deep.  This enhances the possibilities for epidemics of waterborne tropical diseases such as dengue fever and leptospirtosis [mideivil plague caused by rats breeding in garbage and stagnant water].  AAI continues to care for children who are  "out of sight, out of mind" due to lack of media coverage.  Current efforts include feeding programs of rice porridge, donations of vitamins, efforts to acquire clean water filtering systems and fever reducing medicines.  We are seeking assistance though many modest donations to continua our flood relief programs into the Christmas Season.  We thank Global Giving and all of our generous donors for their kindness and care. 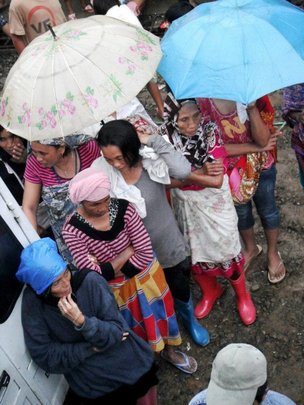 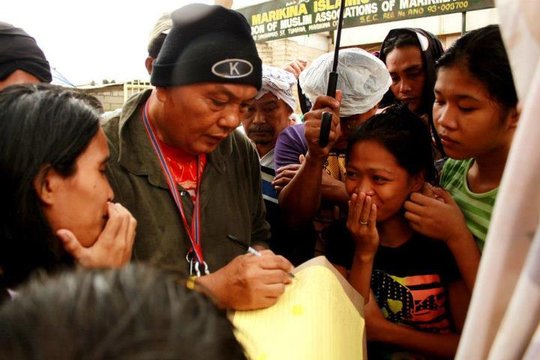 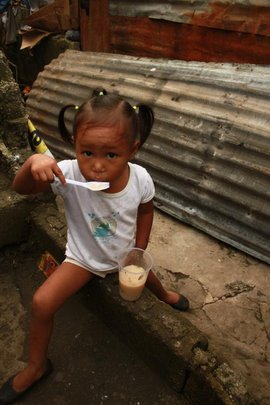 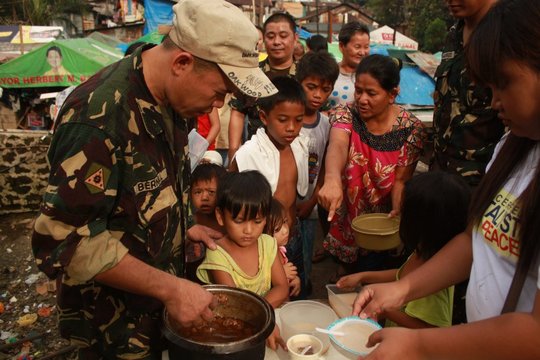 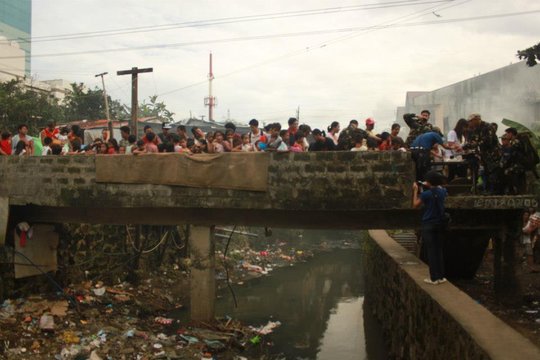 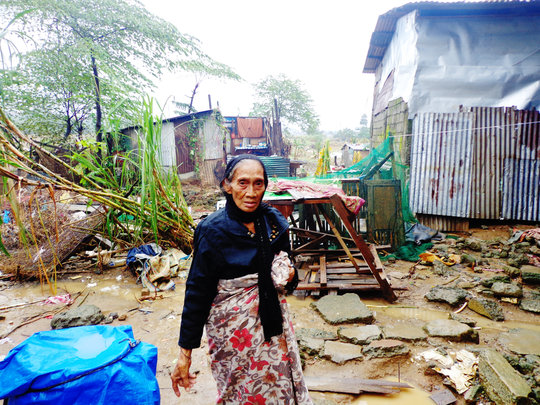 In early August 2012, the Philippines was devastated by the unanticipated ferocity of monsoon rains. Flood damage displaced more than 1.5 million people in the capitol region and other areas of the northern islands.   Massive destruction created by overflowing rivers and dams swept away many homes and entire communities of makeshift shanties.  Numerous municipalities and towns in the capitol region were affected, particularly areas such as Markina, Quezon City, Bulacan, Cavite and rural areas such as Baggio and Pagasinan.  The extent of the calamity overwhelmed the Red Cross and government agencies.

With donor support from Global Giving in Washington, Asia America Initiative [AAI] staff members partnered with mobile relief teams from the Philippine Armed Forces 7th Civil Relations unit and volunteers from local non-governmental agencies to bring food and other humanitarian necessities into some of the hardest to reach and underserved communities in the city and countryside. These areas have both Christian and Muslim populations.  They are being especially threatened now with epidemics of lethal viral diseases such as leptospirosis, cholera and dengue fever..  To address these needs, AAI is proving clean water tablets, antibiotics, blankets and rubber boots for children to prevent their contact with disease-infected water and mud.

The number of people served  by the AAI coordinated program in Manila and Mindanao is close to 10,000. Flood victims of all ages received help by the collaborative private-public sector effort covering at least five crowded communities.  Bags of staple foods for families of five to six people were enough for at least 5 days of sustenance.  In addition, AAI shared resources to purchase food with NGO partners working in the war-torn area of Mindanao where 60,000 people – including at least 30,000 babies and children -- are currently being sheltered and lack the basic necessities.

The displaced population includes many widows and female heads of household.  Among them:

Mrs. Erlinda Paguinto, 37 years old, mother of three small children, lives in Tumana village, Marikina City. Their community is one of the most damaged by flood water and the inside of her house is covered with mud.  She is currently working as a factory laborer. Her small pay of less than $5US per day is their only source of sustenance which makes it hard for her to provide for their everyday needs. Their house is small but they treasure it as the place where they build their dreams and memories together as a family. Sadly, their house was destroyed in a flash by flood waters higher than the second floor of their home. Their clothes, furniture and appliances were all buried in mud after the flood subsided.

“We went to the high school for shelter when the flood hit our community”, she says. “After the flooding was over I tried to clean the mud from our home.  But a heavy rain came again, causing another flood.  May of us are getting sick… we must get our water from a pump.  We are in dire need of assistance.  It is really hard.  We appreciate the food you brought, but we will need more… and also blankets and used clothes.”

Life was hard for them before the flood, but now life will be harder as they face the aftermath. They are in dire need of assistance in rebuilding their lives. Their health is also at stake as viruses, cold, coughs and skin infections are rampant. Outbreaks of deadly cholera, malaria, dengue fever and leptospirosis are a constant threat.  Despite these hardships, Mrs. Erlinda is moving forward for her children’s sake.  Although losing their home is depressing, she still has reasons to be thankful because her family survived the flood. As we talked with her, we saw the hope in her eyes and after our discussion; she managed to give us a warm smile but could not hide the pain and fear of the hardship to come.

Andang Sarif, a 72-year old woman, is living alone in Marikina. She was born in Marawi City, Lanao del Sur but chose move to Marikina to avoid the armed conflict between Christians and Muslims in her home province. Unfortunately, her search for a safe and peaceful place to live in has been destroyed again. Her house was also one of those houses swept away by the flood, forcing her to stay in the Mosque during the heavy rains. “My house is not there anymore,” she said with the look of shock and despair.  “I am now sleeping outside in the mud because I have nothing left.” This was not the first time that this happened to her. Three years ago, her house was also destroyed by the Typhoon Ondoy. While still recovering from the damages caused by Ondoy, she would need to start all over again after the recent tragedy. Starting a life after an unexpected disaster is hard, but what makes it harder for Andang Sarif is that she would have to face these challenges alone.  She and her neighbors can maintain a glimmer of hope because of the presence of AAI staf and volunteers and the support we have received from our GlobalGiving partners from around the world.  We deeply  thank you for your kindness and generosity. 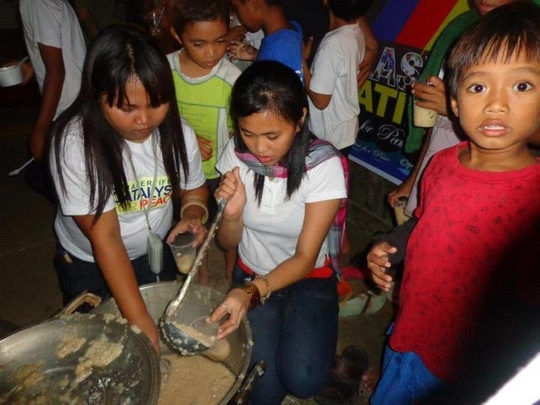 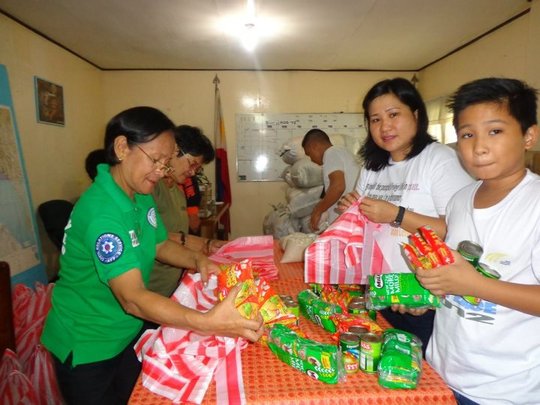 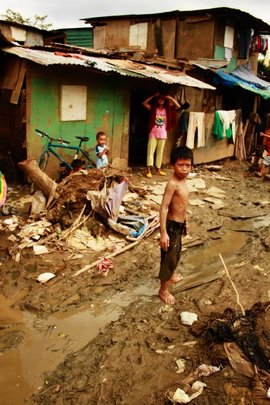 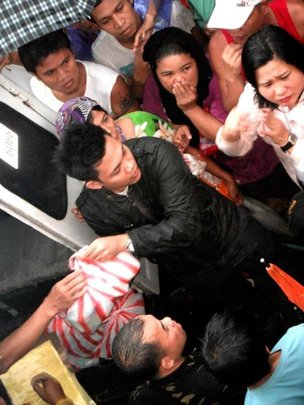 ‹ 1 ... 55 56 57 58 59 60 61 62 63 ›
WARNING: Javascript is currently disabled or is not available in your browser. GlobalGiving makes extensive use of Javascript and will not function properly with Javascript disabled. Please enable Javascript and refresh this page.