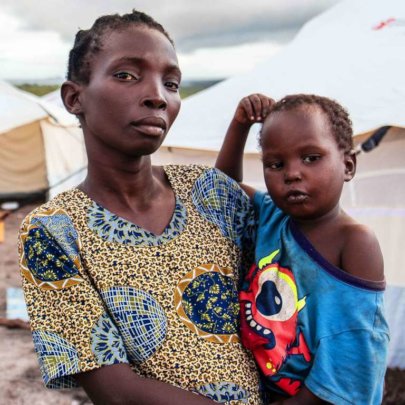 A mother and daughter at a temporary camp

When Cyclone Idai struck northern Mozambique four of the country’s 10 providences were already flooded due to heavy rainfall. Hundreds of thousands of people that had previously been evacuated, including some 60,000 children, were living in shelters not equipped to handle the impending cyclone. Moving inland into Zimbabwe and Malawi, Cyclone Idai left a trail of destroyed homes, schools, hospitals and infrastructure in its wake. A 30-mile-wide area in Mozambique’s Sofala province had been completely submerged.

An estimated 1.85 million people, including close to one million children, have been affected by Cyclone Idai. The disaster is one of the worst in southern Africa in decades. The double impact of Cyclone Idai and Cyclone Kenneth, which struck Mozambique just six weeks later, will affect children for years to come.

Many families have neither a home nor a village to return to, as entire villages were wiped out. As valuable agricultural land disappeared under water, so too the region’s food security. With crops destroyed and thousands of children already on the brink of hunger, the number of malnourished children under the age of five in cyclone-hit areas of Mozambique is expected to nearly double.

The contamination of water sources has created perfect conditions for diseases to spread rapidly. More than 6,500 cases of cholera have  been reported in Mozambique. A drastic spike in malaria has led to nearly 20,680 reported cases.

More than 3,500 classrooms have been destroyed in Mozambique alone, with hundreds more in Zimbabwe and Malawi impacted.

Before Cyclone Idai made landfall, our Emergency Health Unit deployed to Mozambique and stood ready to respond to the needs of children in affected communities. In the immediate aftermath of Cyclone Idai, Save the Children delivered 112,400 pounds of critical supplies like tarps, hygiene kits, water jugs and tents to Mozambique via a cargo plane.

Our teams continue to deliver much-needed support to affected communities. Blankets, mosquito nets, buckets to store clean water and solar lights are being distributed to families. We’re also providing seeds and farming tools so that families can plant a new crop – just in time for the growing season.

We continue to expand the range of our mobile health clinics and we’re finding ways to provide health care in hard-to-reach areas that are still accessible only by air. As malaria is becoming a health concern, we continue to distribute mosquito nets to protect children and their families.

To ensure children don’t miss out on months of learning, our education team has been assessing damaged schools for repairs, constructing temporary learning spaces and replacing school supplies to get classes underway.

Thank you so much for your support of children in need. Your donation is helping provide this lifesaving relief to children and families impacted by these storms. 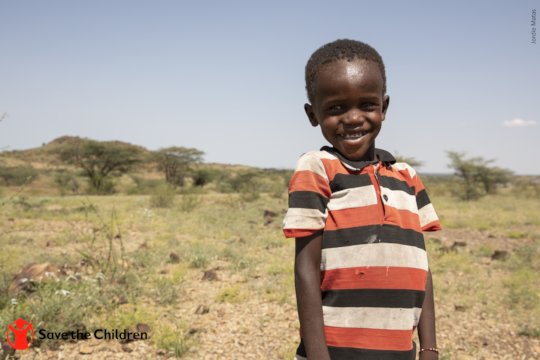 In many ways, four-year-old Jacob is just like any other little boy his age. He likes playing with his friends, enjoys stories from his mother and is never happier than when eating!

Yet Jacob has more reason than most to look forward to his next meal. In rural Kenya where he lives, there’s very little food to go round.

His mother, Alice, told us more. “It is because of the drought that we are hungry,” she explained, “Because our livestock has died.” Losing their three goats was a bitter blow to the family and left them struggling desperately for survival.

With no milk or meat to live on, it’s no wonder that little Jacob grew sick – painfully thin, weak and wracked with diarrhea. But thankfully, Save the Children has set up an outreach health center not far from his home. And there, he was diagnosed with malnutrition and given a nutrient-rich peanut paste to save his life. It took eight long months to nurse Jacob back to health, but he was lucky enough to make a full recovery.

“His condition is now better,” says his relieved mother. “I can’t see any problems with him any more.” Now expecting another baby, she too has received help from our health center – including bags of special flour that she can turn into nutritious porridge. She’s also been taught about the importance of hygiene and given a bucket, bars of soap and a towel to encourage regular hand-washing.

“I am grateful, having the Save the Children center close at hand has changed everything for the family – and given everyone hope for the future for children’s in this area,” she says, as she watches Jacob play with his brother. Having our health.

In Jacob’s mother Alice’s own words: “During the drought Save the Children provided a lot of support, especially to my family. An outreach site had been established about 4km from here, and I was able to receive Corn Soya Bean, which is flour used to make porridge, medical care, a lot of check-ups just to find out if am okay. At the same outreach site they screened my son and provided him with Plumpy’Nut for 8 consecutive months. He is now healthier than before. They educated us on the importance of hygiene to reduce cases of diseases. Save the Children team provided us with a bucket which had bars of soap, and a towel for use after thorough hand washing. I am grateful for Save the Children’s work in this area.”

Story of the Month: Sara, a girl from Syria 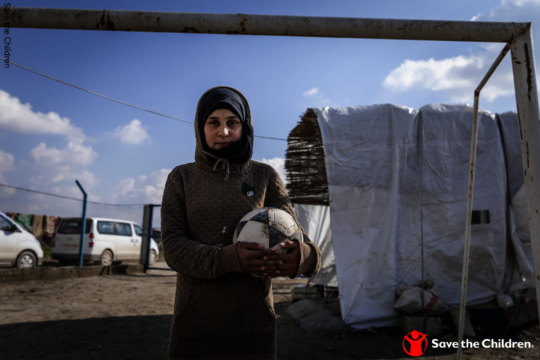 Sara’s story in her own words:

“I am fourteen years old and from Deir Ezzor. I now live in the camp with my parents, four brothers and baby sister.

One evening two years ago, I was watching television with my family when my street was bombed and parts of my house collapsed around us. When we went outside to see the damage, I got chemical dust in my eyes and was in great pain. My eyes were burning and I couldn’t see anything. I didn’t know how I could get out safely when I couldn’t see, but my older brother led me out by holding my hands. I thought the blast had hurt my brother too but thankfully he was unharmed.

After we escaped our house, we sheltered in the alley way just behind it. We could hear that the airplanes were still flying around so we waited until it was quiet. When we returned to our home, my family told me that the whole house had been flattened. I was so sad when I knew that our home was destroyed.

We fled in the car in the night and had to make a river crossing, which was really scary. We couldn’t take much with us, so I had to leave most of my belongings behind. I miss many things from my home - my toys, my family photos. After we arrived at this camp, I had to close my eyes for a whole month. I couldn’t see an eye doctor to get specialist care, and I still can’t see very far in the distance two years later.

Before the war, my life was very, very beautiful. I was happy with my family and my friends. I am not so happy anymore. My life and the war are one now. I hear warplanes and missiles falling all the time. Whenever I hear a plane in the sky I still get so scared.

But I love coming to the Child Friendly Space so much and I love that my parents let me come. It makes me feel less scared and alone. When I first came to this camp, I felt very lonely and like I didn’t have any friends. I thought there wouldn’t be anyone to play with. But now I have lots of friends and a football team! I love football so much, not just a little bit! I play goalkeeper and my team always beats the boys’ team because I save all the goals. It makes me so happy to play with my friends here. I think the Child Friendly Space is important as it makes me feel like I have a future and I have friends. In the future I want to be a teacher.

I loved taking part in the survey and I think it’s important to ask children about our lives. It’s hard to imagine the future of my country at the moment – how can we rebuild Syria when we don’t even have a house? In the future, I want to help my family and rebuild our home. I would tell the world’s children not to go too far from your families and don’t play with anything dangerous.”

Save the Children supports displaced children and their families living in camps across northeast Syria, as well as host communities, with Child Protection, Nutrition, Health, Education and emergency relief. We run Child Friendly Spaces, provide psychosocial support and carry out Case Management for the most vulnerable children. We screen young children for acute malnutrition, and support pregnant and breastfeeding women through group and one-to-one counselling sessions. We also help children continue their education by setting up temporary learning spaces and distributing essential school supplies.

‹ 1 ... 3 4 5 6 7 8 9 10 ... 105 ›
WARNING: Javascript is currently disabled or is not available in your browser. GlobalGiving makes extensive use of Javascript and will not function properly with Javascript disabled. Please enable Javascript and refresh this page.