The cruel act of separation can cause severe negative social and emotional consequences for the children and their families in the days, months and years ahead. Our global evidence shows that children living in institutions away from their families are highly vulnerable to emotional, physical and psychological abuse, which can lead to lasting developmental problems, injuries and trauma.

In response to recent news reports of court-appointed lawyers being unable to find the parents of 545 children who were separated at the U.S. southern border under a 2017 pilot program, Save the Children and Save the Children Action Network (SCAN) have urged the administration, in the strongest terms possible, to fix this man-made crisis and stop putting children at risk.

Children should not have to experience the trauma that comes from daily threats, a terrifying journey, forcefully being removed from their parents, facing danger at the border or being held indefinitely by the U.S. government.

“Children arriving at the U.S. southern border are escaping extreme violence, poverty and unrest, and our government has a responsibility to treat them humanely and with dignity,” said Mark Shriver, Senior Vice President of U.S. Programs & Advocacy. “We are working to make sure children’s rights are realized, protected and upheld, and they are healthy and safe.”

Thanks to the generosity of donors like you, Save the Children is continuing our support to girls and boys caught up in the Border Crisis, delivering much-needed aid to those whose already dangerous situation has been exacerbated by COVID-19.

Success story in Yemen: Thanks to you 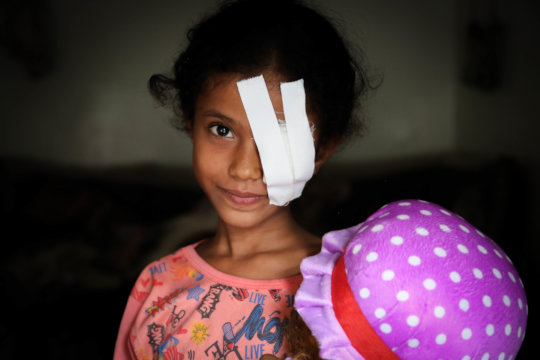 Razan, 8 years old after an airstrike in Yemen

Eight-year-old Razan* (name changed for her safety) seriously injured her eye while fleeing violence in Hodeidah, Yemen in July 2018.  She was riding with her father, Samir,  on a motorcycle when an airstrike hit another vehicle on the same street. A piece of shrapnel from the blast hit Razan in her eye, and immediately caused heavy bleeding and intense pain. As the heavy shelling continued, Samir was forced to continue their journey for safety, and only had time to wrap a shawl around her head.

After an hour they arrived in Almrawah district and Razan’s eye was still bleeding heavily. Samir took her to a nearby hospital to try and stop the bleeding and treat her eye, but the hospital wasn’t specialized enough to help. They advised Samir to take her to a specialist eye hospital, but the family couldn’t afford the bus-fare.

Razan spent five days at home in intense pain, while her eye became more inflamed. Her condition kept deteriorating and she could no longer see through her injured eye. Finally, Samir found someone who could lend him enough money for the transport costs to hospital, and he rushed her there immediately. When they arrived, they met a member of Save the Children Team, who referred Razan for emergency surgery. After her surgery, Save the Children then referred Razan to a hospital in Sana’a for surgery and later for specialist treatment.

After two long surgeries, Razan’s eyesight was saved.  About a year after her operation Razan started getting constant headaches, so she was referred again to a specialist who recommended she get special glasses. Save the Children paid for the glasses and psychosocial support to help Razan recover from what she has been through. In 2020 during a check in Razan reported that she was feeling much better, and the glasses were very helpful. Her headaches has stopped ad she has started going to school again.

Thanks to supporters like you, Save the Children is able to support the recovery of children like Razan, caught in conflicts they had no part in starting.  Thank you for your support! 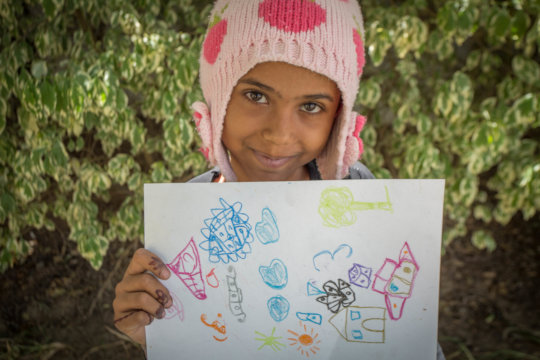 What would our pioneering founder, Eglantyne Jebb, think of our world today and Save the Children’s place in it?

With the relentlessly alarming news headlines, she might fear the world is falling apart. But she would never back down from a challenge. She would know our 100-year history of responding to emergencies and innovating new ways to help children have given us the expertise and the global presence to deliver what’s needed now for children.

Eglantyne’s words are as inspiring and relevant today as they were when she said them in 1919: “Humanity owes the child the very best it has to give.”

As this report is published, the coronavirus pandemic has spread to almost every country in the world, bringing grief, suffering and economic chaos in its wake. Across the world and here at home, the poorest and most disadvantaged families are hurt the hardest. Save the Children is working around the clock to ensure that the health and well-being of children are protected. We invite you to review our results from 2019 and to be assured our work is going full force in 2020, adapting as needed to new realities, and committed to doing whatever it takes to give children the childhoods and future they deserve.

Thanks to supporters like you, we achieved tremendous results for children last year. Together, we changed the lives of more than 144 million children, including 328,000 here in America. In these difficult times, we thank you more than ever for your compassion, generosity and determination to ensure children everywhere survive, learn and are protected. They need us now more than ever – and they deserve the best we have to give.

On behalf of the world’s children,

Janti Soeripto President & CEO Brad Irwin Chair, Save the Children Board of Trustees

Attachments:
1 2 3 4 5 6 7 8 9 ... 107 ›
WARNING: Javascript is currently disabled or is not available in your browser. GlobalGiving makes extensive use of Javascript and will not function properly with Javascript disabled. Please enable Javascript and refresh this page.