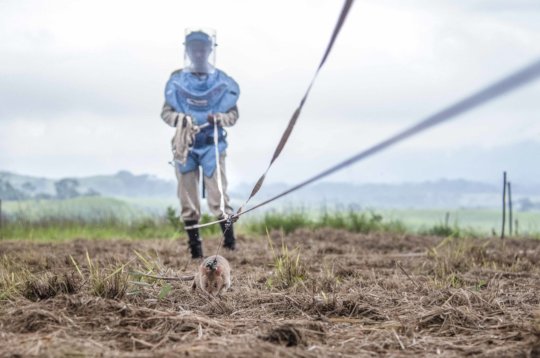 Jumanne the Landmine Detection Rat and her trainer

The start to the 2019 year has been a successful one for us here at APOPO as we continue in our fight against landmines and tuberculosis (TB), with your incredible support. With World TB Day already under our belt and International Landmine Awareness Day still to come this April 4th, we have been able to take time out to review the successes of 2018 and 2019, so far.

In 2018 APOPO Cambodia began working in two provinces concurrently, signing a Memorandum of Understanding (MoU) with the Cambodia Mine Action Centre (CMAC) to commence an additional mine clearance project in Preah Vihear province, running in parallel with our Siem Reap operations. Our work was further boosted in late 2018 through a renewed MoU for the continuation of our landmine detection rat and Cambodia Mine Action Centre (CMAC) clearance operations in Siem Reap for 2019.

About half of Cambodia’s minefields have been cleared and yet it still remains one of the most heavily impacted countries in the world. Leftover landmines and explosives from conflict are still a major hindrance to the social and economic development of the country. They block access to fertile land for agriculture, water sources, and travel routes, and isolate communities from health services. With among the highest number of landmine victims across the globe, the remaining threat imposes financial and emotional burdens on families needing to care for a landmine survivor.

Our renewed MoU with CMAC means we will be able to continue to work to clear land for local communities. CMAC has been integrating our Landmine Detection Rats into its programs since 2015 and we have achieved remarkable results; there is hope that this continuing partnership will enable the clearance of over 1,500,000 square metres in 2019.

Since beginning our work in Angola in 2012 APOPO has helped our partner, Norwegian People’s Aid, to find and destroy landmines and other explosive remnants of war, releasing over 1.1 million m2 of safe area and helping thousands of people back on their land.

In 2018 our work continued as we welcomed a further 16 Landmine Detection Rats to our Angola operations to further bolster capacity. All 16 rats took the long journey from Dar Es Salaam in Tanzania, arriving successfully in Uíge province, Angola having undertaken, and passed, independent testing by our partner, the National Intersectoral Commission for Demining and Humanitarian Assistance (CNIDAH).

Further good news came in the form of a continuation of support from the Stanley Thomas Johnson Foundation, an important partner of our work in Angola since 2017. With their continued support, and the increased capacity from 16 new Landmine Detection Rats, we were able to continue our work to provide a landmine-free Angola to its people by 2025 in accordance with Article 5 of the Anti-Personnel Mine Ban Convention (APMBC).

Despite the work already carried out, Angola remains blighted by large swathes of land contaminated by landmines and other explosive remnants of war with an estimated one-fifth of the population being affected. Our work must continue to make an impact to ensure local communities are provided with security, opening up opportunities for development, farming, and recreation without fear.

In February 2019, APOPO was delighted to be invited by the Organization for Economic Co-operation and Development (OECD) to share a case study on our TB detection program in the companion volume of the new SDG-themed “Leaving No One Behind” OECD Development Cooperation Report. We live in the era of the Sustainable Development Goals (SDGs). These 17 global goals were set by the United Nations General Assembly in 2015, succeeding the Millennium Development Goals, to collectively work towards “the future we want”.

APOPO clearly identifies with the SDG. With our tuberculosis (TB) detection program, we strive for Goal 3: ensuring good health and promoting well-being, and for making our contribution to target 3.3, to end the epidemics of tuberculosis (amongst other diseases) by 2030. APOPO researches TB detection rats which are incredibly fast: one rat can screen 100 samples in just 20 minutes. We use our rapid rats as a “failsafe” – re-evaluating human sputum samples delivered from partner clinics. A sample indicated positive by a rat undergoes confirmation testing with internationally approved tests before the result is returned to the clinic. This approach helps to increase TB case detection by about 40%.

By now, we have tested over half a million samples for TB, found more than 14,700 additional TB cases, and have joined forces with community partners to make sure that ‘Test’ also means ‘Treat’. In the last couple of years, partnering with community-based organizations have helped APOPO track down newly diagnosed TB patients in Tanzania and Mozambique and enable 80% of them to promptly start their TB treatment which usually involves the patient taking a combination of different TB drugs. If the correct drugs are taken for the entire duration of treatment, then for most patients this will cure the TB.

Our other activities in the field are also very much centred around speeding things up: our motorbike sample referral systems in Dar es Salaam, Maputo and Addis Ababa, our rapid testing and result turnaround within 24 hours and prompt action to make sure newly diagnosed patients get on with their TB treatment immediately. Beyond that, a new study has started to find out whether our TB detection rats can identify TB earlier than conventional methods.

In spite of our successes, much work remains to realise a world free of mines and TB. We are forging ahead through the course of 2019 with a renewed focus on the continuation of our efforts to bring good health, security, peace and the chance of development to the communities within which we work. With your continued support, we will be able to do so.

On that note, GlobalGiving's Little x Little campaign is fast approaching. Between 00:00hrs on April 8th through 23:59hrs on April 12th all eligible donations up to $50 will be matched at 50% at no extra cost to you. There will be $50,000 in matching funds available and we'd love you to help us by making your donation go further! Keep your eyes peeled for our further project appeal email on April 8th.

Thank you for your incredible support for our work. 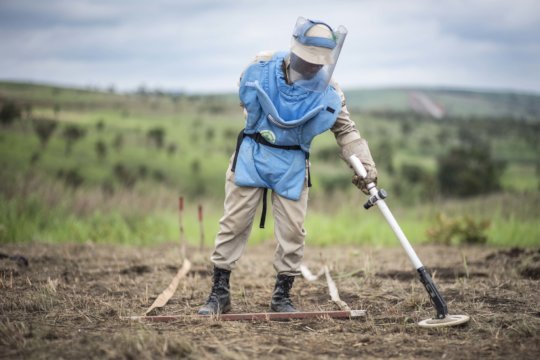 A deminer searches the field in Angola 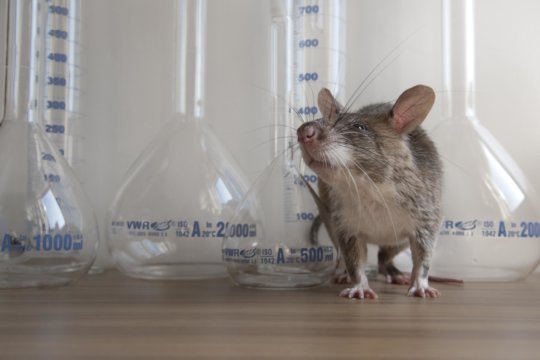 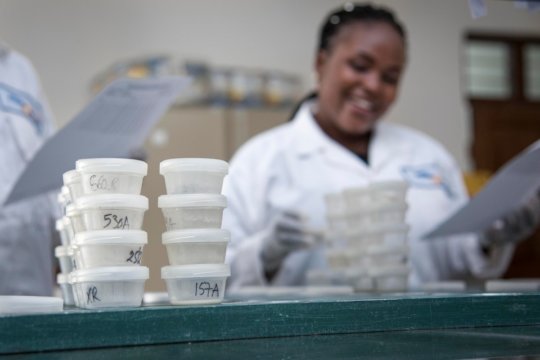 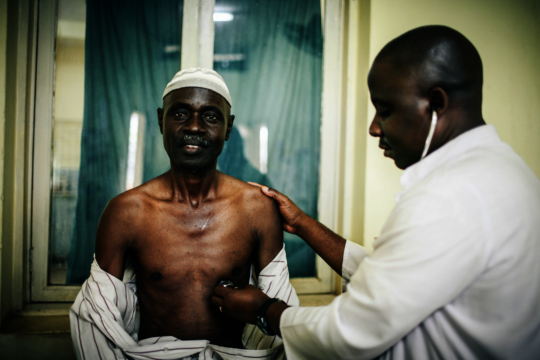 It's thanks to your incredible support that we were able to continue our fight against landmines and tuberculosis in late 2018 and early 2019 - we've certainly been kept busy and great progress has been made.

From the 24th to 27th of October 2018, we attend the 49th World Conference on Lung Health of International Union Against Tuberculosis and Lung Health (The Union) in The Hague, The Netherlands. The Hague Union conference welcomed more than 4,000 delegates from around the world, and united researchers and health professionals committed to Lung Health and to the fight against tuberculosis (TB). It was inspired by emerging science as well as the recent political commitments made at the UN High-Level Meeting on TB.

Our contribution showed that in 2017, after opening the new Dar es Salaam lab and introducing same-day TB testing of the samples, 81% of the newly diagnosed TB patients started TB treatment, compared to 71% in the year before. These results support that the combination of our faster diagnostic service and patient tracking are key in achieving higher treatment initiation rates among TB patients in Tanzania.

This month, we reached the landmark of having re-tested over a quarter of a million patients with signs and symptoms of tuberculosis (TB), across sites, since the APOPO TB-detection research program began in 2007.

Our programs work within government health systems to support over 100 partner clinics in Tanzania, Mozambique and Ethiopia in their fight against TB. According to estimates of the World Health Organization (WHO), about half of the TB patients in these countries are ‘missed’. Some remain untested or unreported because of social or economic barriers that prevent them from accessing healthcare at their local clinics. Yet even when patients are able to overcome these barriers, the quality of health systems varies and there are limitations to the available diagnostic tools at clinics, resulting in some patients being sent home undiagnosed and without treatment.

Globally, the WHO estimates that just over a third of the 10 million TB patients were “missed”, which translates to 3.6 million people each year who have not received a diagnosis or appropriate treatment. To improve detection, diagnosis and treatment rates, WHO, the Stop TB Partnership and the Global Fund launched a new initiative in 2018 which set the target of providing quality care to 40 million people with TB from 2018 to 2022.

On 17th December 2018, we met with the Cambodia Mine Action Center's (CMAC) Director-General and His Excellency Heng Ratana in Phnom Penh to sign a memorandum of understanding for the continuation of APOPO’s Mine Detection Rat and CMAC mine clearance operations in Siem Reap province in 2019.

His Excellency Heng Ratana explained that CMAC has been integrating mine detection rats into its programs since 2015 and has achieved remarkable results. He hopes this partnership will enable clearing over 1,500,000 m2 in 2019.

As part of an integrated capacity, mine detection animals will significantly increase productivity and allow the return of much-needed land back to affected communities more quickly and cost-effectively.

On 16th January 2019 we, along with our partner CMAC, were thrilled to announce the completion of a minefield in Dai Ao village of the Sre Noi Commune in Varin District. A handover ceremony was held to release 520,257 square meters of land back to the community that was cleared in the second half of 2018.

The land was officially handed back to the villagers of Dai Ao who were living in and around the large minefield, until APOPO arrived and started clearing the land, metre by metre. In a country where poverty is widespread, cultivating land is an important source of income. When the ground is contaminated with landmines this can create an impossible choice. All too often, the urgent need to support growing families means using dangerous ground is necessary.

The clearance was carried out using 3 different teams that worked tirelessly together for 6 months – a vegetation cutting machine team to prepare the land before the rat teams go on, a landmine detection rat (MDR) team of 8 handlers and 12 rats, a manual demining team using metal detectors to confirm rat findings and prepare boxes for the rats. They found and safely destroyed 187 landmines and 120 unexploded remnants of war (UXO).

Thank you for your incredible support through 2018 and into 2019. With your continued support we'll be able to bring safety and good health to the people we serve. 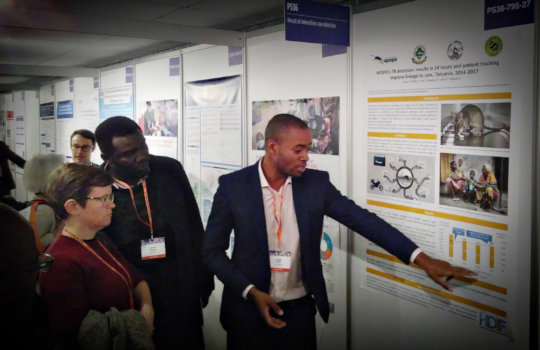 APOPO at the World Conference on Lung Health 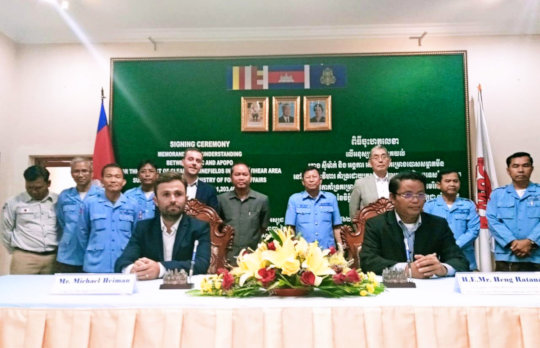 APOPO renews partnership with CMAC for 2019 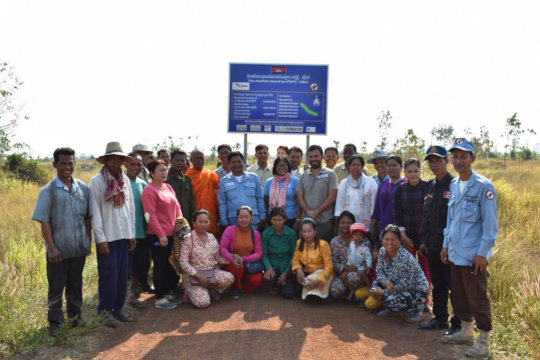 New Trees for a New Year 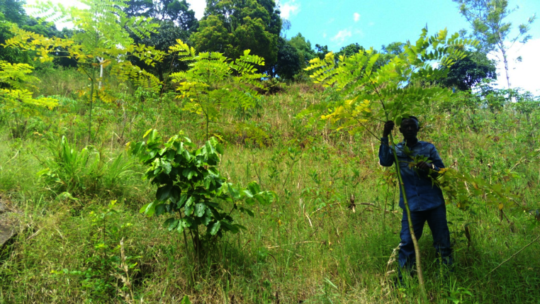 From October to December 2018, our HeroTREEs colleagues and farmers worked hard to ensure a successful close to the year planting a whopping 3,718 new trees. These new trees will directly contribute to reduced greenhouse gases, increased water quality, and an increase in the carbon content of the soil.

In addition to new trees being planted, Choma Street nursery prepared and nurtured 2,200 new seedlings ready to be planted in 2019. Of those seedlings, there were:

A significant amount of training was also undertaken in the last quarter of 2018 with 90 farmers from Ruvuma, Mgambazi, Tulo, Choma and Kisosa in attendance. The training covered a number of topics including the collection and storage of seeds, their plantation in polythene bags, nursery establishment and the care of new seedlings.

A new year brings new goals for both APOPO and Sustainable Agriculture Tanzania, and with your help we'll be working to find more indigenous species in both seed and seedling form to establish a brand new nursery. We'll also be working hard to transplant the seedlings which have reached maturity and are ready for planting.

Both APOPO and Sustainable Agriculture Tanzania thank you for your continued support of this important project and we hope you'll continue to support us into 2019. 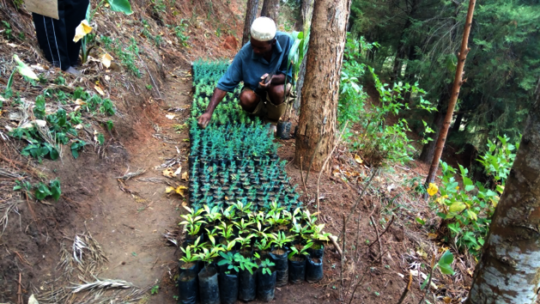 HeroFARMER: Abdallah managing his nursery
‹ 1 2 3 4 5 6 7 8 9 ... 40 ›
WARNING: Javascript is currently disabled or is not available in your browser. GlobalGiving makes extensive use of Javascript and will not function properly with Javascript disabled. Please enable Javascript and refresh this page.