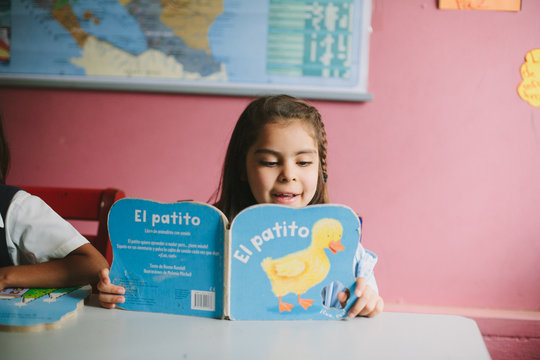 In 2014, Fabretto's Primary Education Enrichment program has continued to bring quality education and nutrition to children in vulnerable communities. A key component of this program is improving teacher preparation. In Nicaragua, one quarter of public school teachers are not formally trained. In rural and historically underserved communities, where children are often struggling or behind, this percentage is even higher.

Fabretto responds to this need with comprehensive teacher training that develops effective educators who create a positive classroom environment. Most teachers in Nicaragua rely on traditional blackboard lessons where the teacher talks and students copy into their notebooks. In contrast, Fabretto training sessions helps teachers use updated teaching methods and facilitate activities that encourage student participation. Teacher training can have an enormous impact on student performance and attendance; we have seen that good teachers keep children in school and help them truly learn, which is especially crucial in the communities where we work.

This year, Fabretto has selected primary school teachers who show leadership potential to attend training sessions that cover teaching reading and mathematics, fostering creative and critical thinking skills, and promoting positive values (respect, responsibility, etc.). To multiply the impact, Fabretto has designed training sessions to prepare participants to replicate the training sessions at their schools for their fellow teachers as “teacher-trainers” (see infographic). Fabretto staff also follows up with regular classroom visits to support teachers as they implement the new methodology.

Teachers and students alike are benefiting from excellent teacher preparation. Sindy, a first grade teacher in Somoto, has worked with Fabretto's primary enrichment program for four years. The day we visited her classroom, her students were working independently on an interactive literacy lesson, creating words by matching slips of paper with syllables. Jean Luis, age six, told us proudly that he was able to write "hard words" now. For Sindy, Fabretto's training helped her design creative lessons to teach the basics of reading, the most fundamental academic skill. She explained, "The children are motivated... I've visited their homes to motivate their parents too." With improved teaching techniques, Sindy and her fellow Fabretto teachers are awakening children's interest in learning and building a strong foundation for their futures. 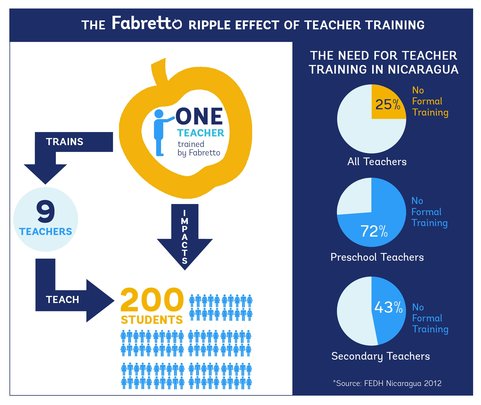 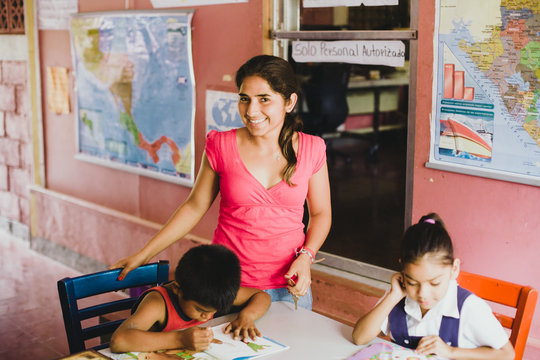 Sindy, Somoto teacher, with her students 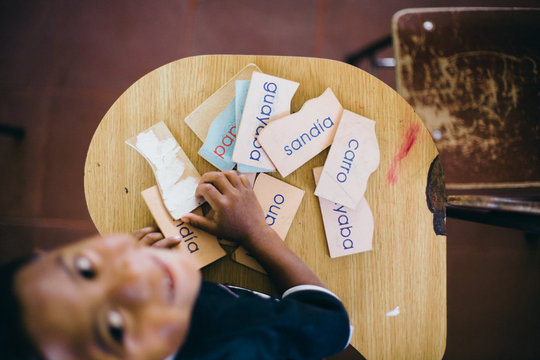 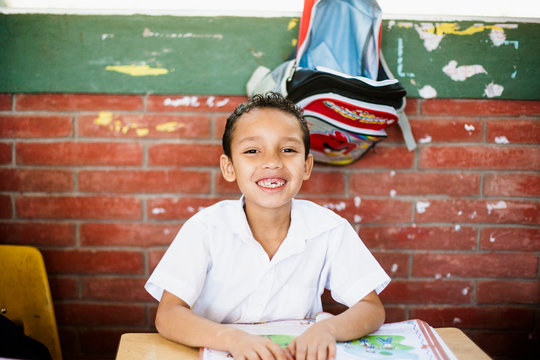 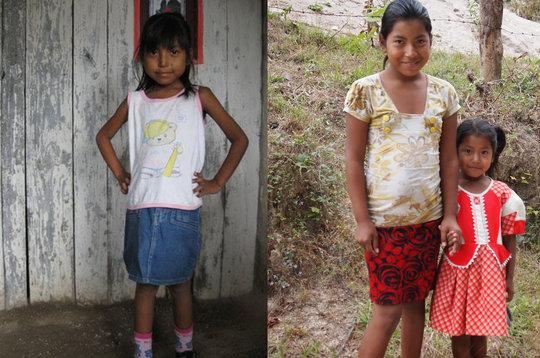 For children living in poverty in Nicaragua, joining Fabretto’s primary education program can literally change their lives. One inspirational story of the transformative power of Fabretto programs is the story of Fatima, a young girl from in the tiny community Imires in rural northern Nicaragua. With Fabretto, Fatima found the resources and support that she needed to overcome a life-threatening illness and continue her education.

In 2009, Mike, a volunteer at Fabretto’s education center in nearby San José de Cusmapa, noticed that Fatima, then seven years old, was suffering from health problems. At the time, her body was malnourished and swollen due to a kidney disease. After speaking with her family, Fabretto’s staff found out that Fatima’s mother had passed away several years earlier from a similar disease. Her father and stepmother were very concerned about her health but lacked the resources to take her to the hospital.

Fabretto helped transfer Fatima to a children’s hospital in Managua, over six hours away by car, where she received treatment for her kidneys. With just three injections, her swelling slowly reduced. After her treatment, Fatima was able to walk again and return to class as a second grader in 2010. With help from Fabretto teachers and afterschool enrichment classes, she caught up with her school work and passed the grade level.

Today, at twelve years old, Fatima is a healthy sixth grader. Each morning, she goes to Fabretto’s education center for enrichment classes, which reinforce basic academic skills in addition to teaching new skills such as English, music, and art. In the afternoon, she receives a daily meal through the nutrition program and attends the local primary school, where teachers are trained by Fabretto to provide excellent primary education. Fatima’s younger sister attends the same school, and both girls are looking forward to a new addition to the family—a little brother or sister—very soon.

Fatima’s father, Felipe, is her biggest supporter. “My father motivates me to study hard,” she said. “I want to continue my studies in the future.” With support from Fabretto’s primary education program, Fatima is well on her way to achieving her dreams. 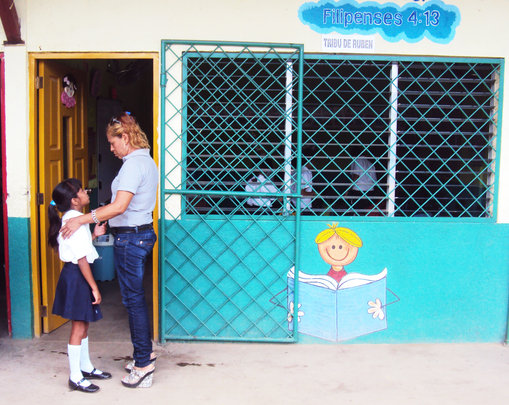 Fabretto teachers are supportive and dedicated 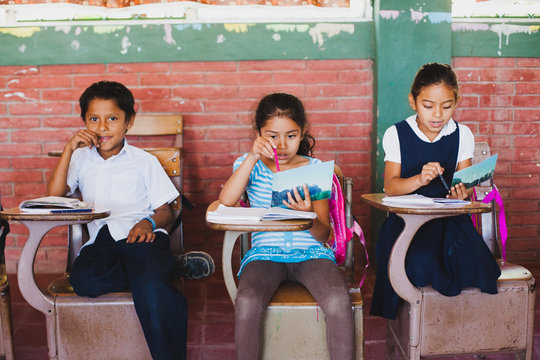 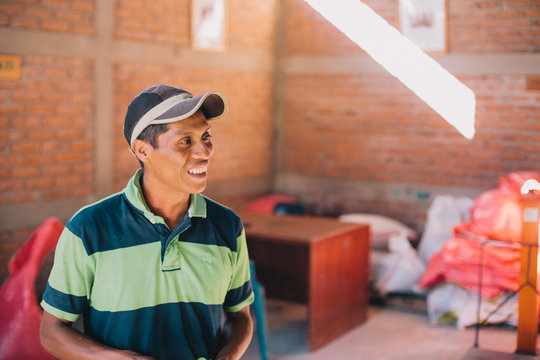 The 2014 school year began in February, including new programs in two communities outside of the town Somoto, Soní and Cacaulí. This year, SAT continues to prepare students for economic success. SAT tutors engage students in business activities to develop entreprenuerial spirit, in addition to providing excellent preparation for university studies and formal employment. In rural Nicaragua, lack of economic opportunity forces young people to migrate to urban centers to seek low wage employment. With quality education that teaches skills relevant to the rural environment, SAT helps talented youth succeed at home and develop their own communities. The two SAT student cooperatives also allow students to apply for loans and start small businesses. SAT promotes gender equity in all activities, and in 2013, 60% of the students involved in business initiatives were female.

Olvin, from the tiny rural community El Castillito, is one exemplary student who has benefitted from SAT's focus on relevant skills, particularly in agriculture. The SAT program has given Olvin a chance he never had before: access to education beyond 6th grade. Olvin had worked for seven years after finishing sixth grade, but when his mother attended a community meeting and found out about SAT, he enrolled immediately. This year, he will completed the program and receive his high school diploma in December.

In 2013, Fabretto selected Olvin for a scholarship to study a technical course in Administration of Coffee Farms in Jinotega, Nicaragua. Although the scholarship was originally intended for a Fabretto staff member, the staff nominated Olvin for his great potential. He completed the course and since then has provided technical advice as a consultant to the 5 de Junio Coffee Cooperative, originally created with Fabretto's support. Olvin's knowledge has helped the cooperative with crop diversification and the development of a new initiative to grow and export organic chia.

Olvin plans to continue working in agriculture, and SAT has opened up many opportunities to continue learning and progressing. This year, he will apply for a scholarship to study agricultural engineering at a university in the closest city. He currently is involved with a business initiative to grow strawberries and make strawberry jam with his fellow SAT students. Further in the future, he hopes to manage his own coffee farm in El Castillito using the skills he learned in the course in Jinotega and join the 5 de Junio Cooperative. In our interview, Olvin reflected, "All of us in SAT are young, but we have a vision: moving forward." With the SAT program, Olvin and his fellow classmates are driving economic and social development in their rural communities. 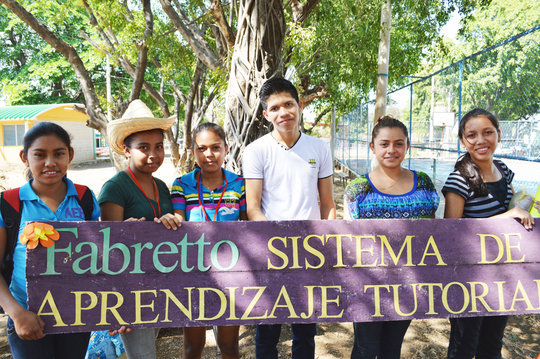