Matias enjoys his life despite his amputation

By Julian Martinez - Leader of Communications 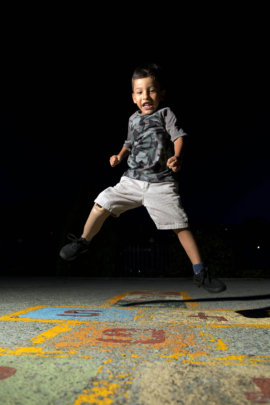 We are happy to tell you that Mahavir Kmina is celebrating 10 years of work for the benefit of lower limb amputees. In this decade, the Corporation has benefited more than 3.400 human beings with completely free leg prostheses. Although most of them are Colombian, our cause has impacted eight other countries in Latin America.

As part of the activities we planned to celebrate this historic milestone, we decided to visit some of our beneficiaries at their homes to have a conversation and prepare some stories to make the public knowledge. One of the most impressive was that of Matias, a four-year-old boy who lives as cheerful and energetic as any other child, despite the fact that he was amputated from one of his legs when he was not yet aware of himself.

Matias enjoys doing many of the things that other children do in Colombia: he likes to go to the playground with his friends, play soccer and swim. Besides, he just started going to school and we know that, for now, he will have no problem.

“We are immensely grateful with Mahavir Kmina and its donors because they are allowing us to give another horizon to Matias' life. With the prosthetics they donate us, our son has a normal and happy life. Matias not only walks, he also runs, jumps, plays and does all kinds of physical activities that we never imagined he could perform”, said Joanna, Matia’s mom.

Mahavir Kmina has donated prostheses to Matias since he was two years old, so it is especially pleasing for us to witness his great evolution. On the other hand, the prosthesis he is using today will be short in some months, but Mahavir Kmina will be present to donate him a new one.

With your support, Matias has a dignified and happy life. But if we want to continue impacting the lives of more amputee children in Colombia, we must work much more. Therefore, please consider the possibility of being a recurring donor to our cause and contribute even more to improve the lives of children with the same condition of Matthias. 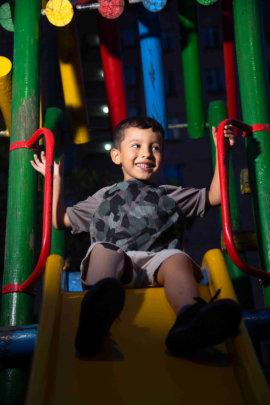 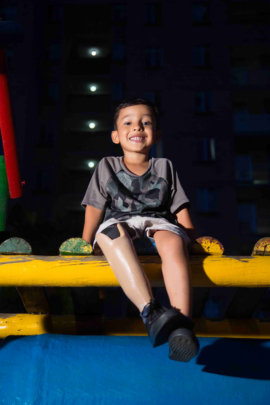 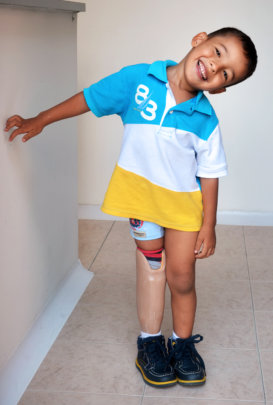 A tower of cups replaced her leg, but not anymore 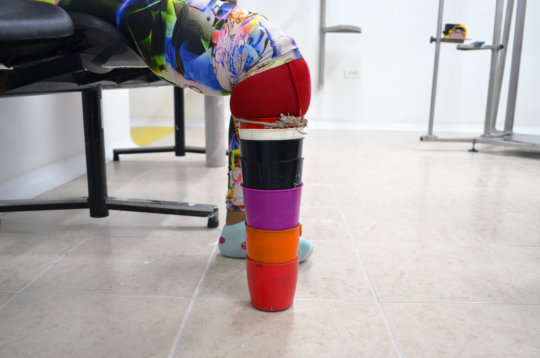 Evis was born without her right leg. At her mother’s pregnancy, the little girl was not able to develop her low limb. Her mother, Ledys, tell us her story:

“When I gave birth, I did not know Evis was not normal. The doctor told me that she had a special situation: she was born without one of her legs. At first, I cried every night, because she was my little girl and I asked myself how she was going to walk. How was she going to live? I filled my head with all sorts of complexes, but then I realized that she had just been born, that I had a miracle in my hands” says Ledys holding back her tears.

During his first years, Evis was not able to live without the permanent support of her family. But at the age of six, she began to walk on her own. “Evis wanted to go outside the house and play, she wanted to be like the other kids. So we crafted her a prosthetic with a bottle of soda, which she used until it did not fit anymore”, explains Ledys.

Therefore, her grandma fabricated another “prosthesis” with plastic cups. She picked many of them, each one of a different color, and put them one inside the other to make a tower on which the stump rested. While she grew, more cups were added to the tower. Evis walked in that way for almost nine years, until she got a real prosthetic from Mahavir Kmina.

Evis did not want to speak with us, she is a very shy girl. Even so, she is a great example of strength and perseverance. Her colorful tower was not the exactly what she needed, but it certainly helped her to have an almost normal lifestyle. She even used to play soccer and volleyball with her friends, but now she has the appropiate leg to play as a champion.

In the present days, Evis is going back to school, enjoying her youth and dreaming with being a great doctor. All of this is possible thanks to Mahavir Kmina, but even more to you, who gave a donation to cover the crafting expenses of her prosthetic.

Our prostheses are donated free of charge to our beneficiaries, that is why we need your support to continue helping Colombian amputee children to walk again. Please consider the idea of being a recurring donor of this project.

From Kmina’s family, thank you very much for believing that there still are opportunities to star over. 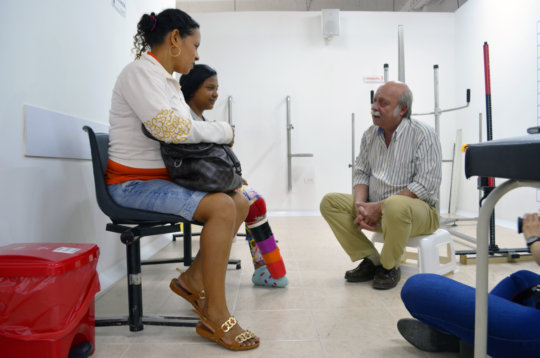 Evis and her mother in the measurement room 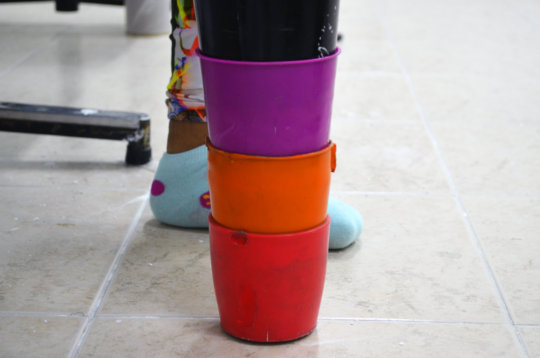 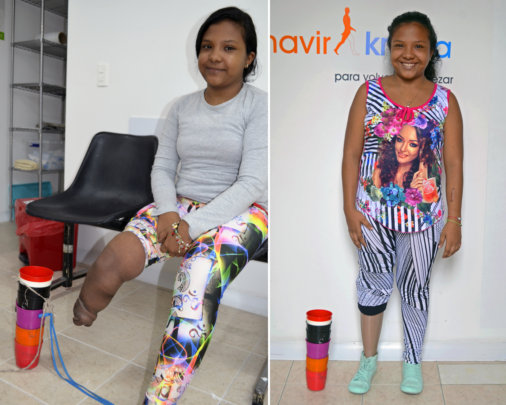 Together we can build new begginings 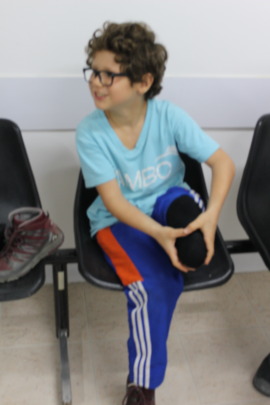 We love to see our kids smile because their dream to walk again became a reality. Mahavir Kmina Artifitial Limb Center works side by side with our donors. You are our most important combustible, the reason why we can be life changers. We are constantly making new micro projects so more children can receive our help. These four cases below are the most recent little ones that need all of our help, we appreciate you take a minute and take a look to our future, our kids:

A prosthesis to see Karen`s smile

Karen lives in a rural zone that demands her to pass through unstable surfaces. She was born without one of her legs, because of this Mahavir Kmina and our donors, will help her to receive a lower artificial limb. This way Karen will walk as long as she wants, she could be able to run and the sadness from her face will probably go away.

Enter into the link below if you want to change Karen`s life https://www.globalgiving.org/microprojects/a-prosthesis-for-a-smile-from-karen/

Camilo wants to swim again, you can help him!

With this project we will make and donate a prosthesis for Camilo’s leg. He is a boy from the department of Choco, a place surrounded by the ocean. He loves to swim in the sea but he is to shy when people don't see his leg. Additionally, he can’t swim very well with one leg missing. Help us build his dream.

Enter into the link below and make as many donations from the amount you want if you want to change Camilo´s life https://www.globalgiving.org/microprojects/camilo-wants-to-swim-again-you-can-help-him/

With your thoughtful help you will help Sebastian once again. On the past vacations he grew up and noticed that his prosthesis did not fit anymore. Therefore, we ask for your help so we can give this playful kid, a new leg.

Enter into the link below and make as many donations from the amount you want if you want to change Sebastian´s life https://www.globalgiving.org/microprojects/sebastian-grew-up-and-needs-new-prosthesis/

Help baby Samuel to learn how to walk

This micro project will specifically help us set up a prosthesis to a baby called Samuel. This little boy was born with a problem in his heart that complicated his health and when he was 10 months old, a very strong medicine produced the amputation of his four extremities. With your donations we could begin the process of construction and donate Samuel his prosthesis.

Enter into the link below and make as many donations from the amount you want if you want to change Samuel´s life https://www.globalgiving.org/microprojects/give-prosthetic-legs-for-100-children-in-colombia/ 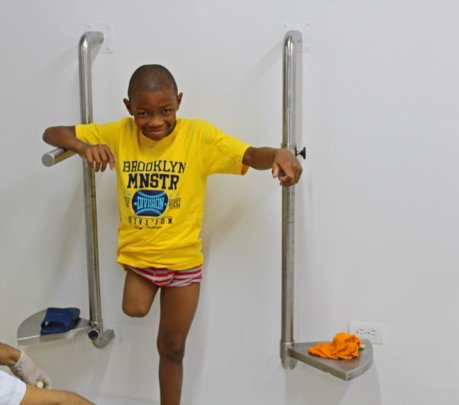 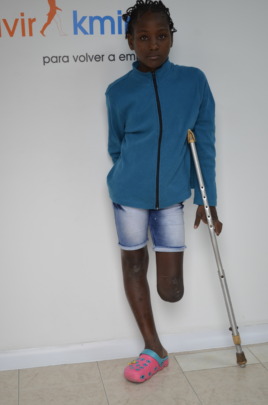 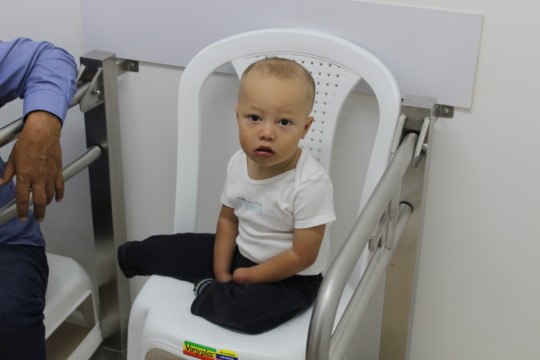