A prosthetic low limb for a sixth month baby 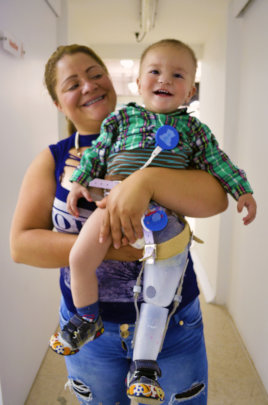 Gerome is happy with his first prosthetic leg

Gerome is a six months old baby with a special condition. When he was just two months old, he lost his leg due to an act of medical negligence, at least that is what Adiela, the child's mother, affirms. “It has been very difficult for us to adapt to this situation, there is no returning point, my baby will never get back his leg and it hurts me a lot that this happened due to an error of a professional who did not take the proper precautions”, she says.

Even so, Adiela kept a thin thread of hope. A few weeks ago, she called us asking for our support and we, of course, gave it to her. In that moment she confirmed that all was not lost, because Gerome would have the opportunity to walk, as is typical for a child of his age, and later on he could have a completely normal, happy and healthy childhood.

Francisco, one of our technicians, took measurements of Gerome’s stump to make what would be his first prosthesis. That same week, Adiela received a call from us informing her that the prosthetic was ready and she could come with her child to our attention center.

One month later, Adiela has noticed important changes in Gerome’s life. He is already taking his first steps and will soon walk without help. “My baby looks happier and healthier, he does not want me to take off his prosthetic, I think he feels it like part of himself. He is now learning to walk, his record is four steps without help and we (his family) are sure that Gerome will be rehabilitated very soon”, she says.

But Gerome’s story is just beginning. He will need more prosthetics as he grows but, fortunately, Mahavir Kmina and its donors will be there to give him as many as he needsthroughout his life.

We love to share this kind of stories with you because your help is one of the engines that allows us to continue working for the benefit of thousands of children with disabilities. Please consider to become a recurrent donor to helps us change more lives like Gerome’s. You can also share this story with all your friends and family members and follow us in our Facebook page and Youtube channel.

See you soon with another amazing story. 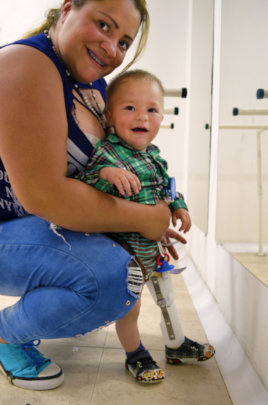 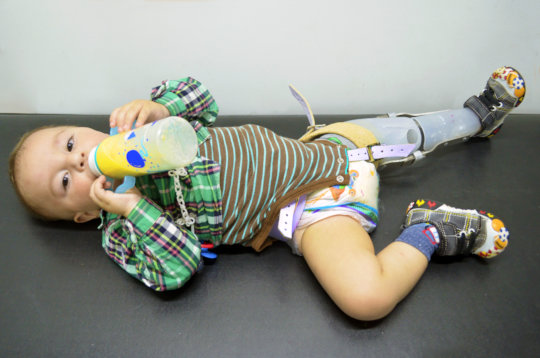 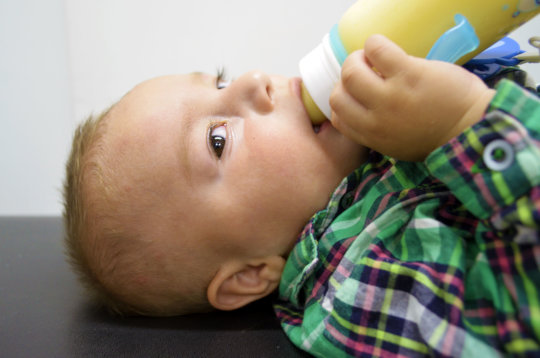 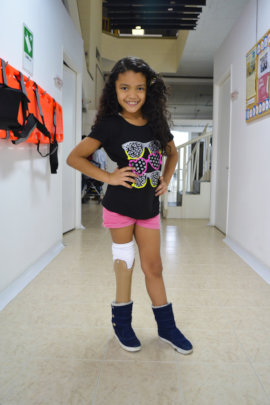 When it comes to breaking the ice, few things are as effective as a smile; some of them, which have an honest naturalness, are so powerful that they can soften even the hardest heart. Darlys smile is one of those.

The little girl is one of the 900,000 Venezuelans who have migrated to Colombia in the last 20 years because of the increasingly deplorable political situation of the neighboring country, which makes her part of the largest Exodus ever seen in the northernmost state of South America (2017, March 30. Venezolanos, la migración más grande en la historia del país. EL TIEMPO. Recovered from https://goo.gl/9HVV2h).

"We cannot live in Venezuela anymore, we came here looking for an opportunity to give our children a future," says Deilys, Darlys' mother, when we asked her about the reasons that brought her and her family to Colombia . However, beyond the search for a stable job or a more peaceful environment to live, the primal motive that led them to leave behind Caracas, their home, was Darlys.

Little Darlys, who has already turned eight years old, was born with a strange malformation in her right leg; reason why she had to undergo surgery, when she was two years old, which ended in the partial amputation of her leg.

"There are no drugs in Venezuela, much less prosthetic legs," says Deilys. However, the desire to give Darlys an opportunity to have a normal childhood was not enough reason to leave the country, because prosthetics are very expensive and the girl's family never believed they had the means to give one to the child:

"She has used prosthetics since she was two years old, but our health insurance used to give them to us before the new government; now, with Maduro in the presidency, the Venezuelan health system is in chaos. When the prosthesis that she had began to deteriorate, we became frightened, we had no idea what we were going to do, that's when we heard about Mahavir Kmina, "says Deilys.

With great difficulties, international calls are restricted in Venezuela, Darlys' family was able to get in touch with the Mahavir Kmina Corporation, a non-profit organization that manufactures prosthetic legs and provides them free of charge to anyone who needs them, and whose facilities are located in Medellin, Colombia. It was then that Deilys discovered that all was not lost.

As soon as it was confirmed that the sweet little Darlys would be benefited by Mahavir Kmina, Deilys and her husband did not think twice and began preparations to leave behind the world they knew. The family arrived shortly afterwards to Medellin and settled down in Villanueva, one of the busiest neighborhoods of the active and noisy downtown. However, the plans were not as they imagined and the lack of opportunities forced Darlys' father to leave his family and travel to Barranquilla, where he got a job as a farm keeper.

For Deilys, the situation has not been very different. "I worked as a manicurist in Caracas; We've been here for two months now and I have not been able to find a job opportunity”, she says. Also, now that her husband is absent, the entire responsibility for raising her children falls entirely on her.

At least, now she has one less reason to worry, because thanks to Mahavir Kmina, Darlys not only got a prosthesis that will replace her leg, she also gained an opportunity to have a more autonomous and happy childhood. "I am very grateful to the Corporation and its benefactors because they have given my daughter the opportunity to be a special girl with a normal life", she says with great joy.

For her part, Darlys is happy to be able to return to school, she is already in her third year of elementary school, and to play soccer again, her favorite sport. When we ask her what she wants to be when she grows up, she replied: "I want to be a doctor, to help others as this institution has helped me."

Like Darlys, the Mahavir Kmina Corporation has given more than 3,500 people an opportunity to regain their mobility, self-esteem and independence. This work, however, would not be possible without the support of all our benefactors and, therefore, we are deeply grateful. 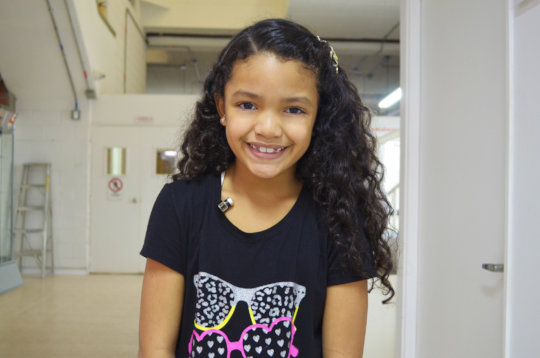 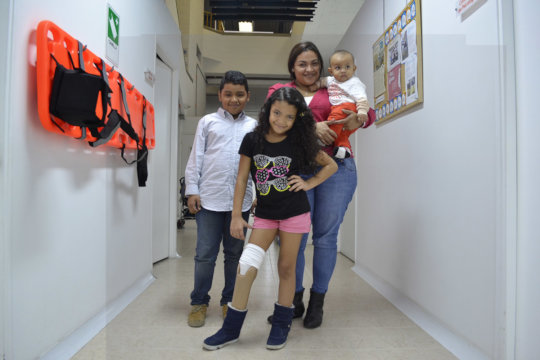 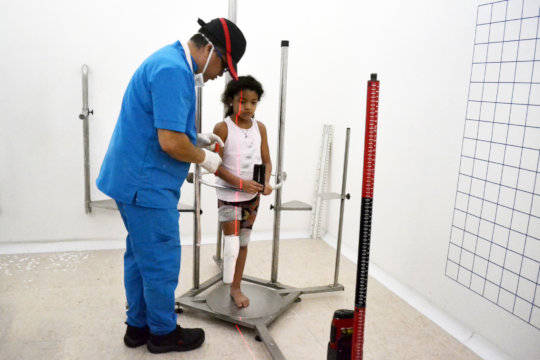 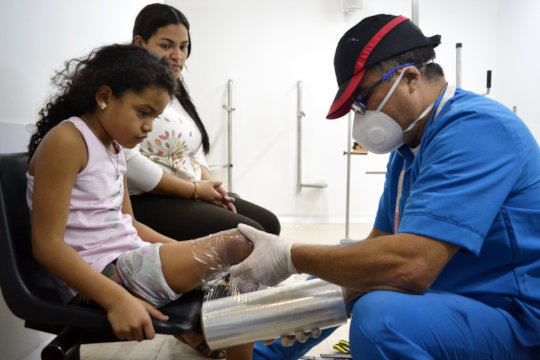 Jesus learned to walk with a free prosthetic leg 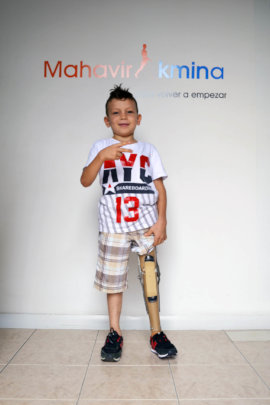 Mahavir Kmina continues its work for the benefit of amputees of lower limbs in Colombia and Latin America. We have benefited now more than 3.500 human beings with completely free leg prostheses.

Jesus is a very special one among them. The six year old kid is a native of the beautiful San Juan de Urabá, a small port city on the edge of the Caribbean Sea. One morning, when the boy was only a year old, Jesus crawled out of the farm where he lives with his family. Without noticing his presence, a man cut the lawn of the grounds around the house with a scythe. That's when one of the blades of the device crossed with the right leg of the baby, amputating it in the blink of an eye.

The boy has no memories of the tragic accident; for him, the possibility of walking is a diffuse and improbable dream. Or it was before knowing Mahavir Kmina, because the Corporation has donated him a free prosthetic with which he will walk for the first time in his life.

Now that he learned how to walk, the next step for him is to learn how to be a coastal child. “We live near the sea, but we rarely go to the coast, Jesus gets really sad when he sees other children running and playing in the low waters of the ocean, but we are very grateful to Mahavir Kmina and his donors, because now he can live the joy of every coastal child”, said Yolanda, his mother, before leaving our facilities.

In addition, Jesus has just started his school years and has already learned the route he must take on foot, day by day, to learn and shape his future. "The other children see him with curiosity and ask him many questions, but his interaction with Jesus is very important because they become sensitive to these diverse reality from an early age and learn to respect it as a valuable life experience”, expressed Gloria, his teacher.

The prosthesis Jesus is using today will be short in some months, but Mahavir Kmina will be present to donate him a new one. With your support, this amazing kid has a dignified and happy life. But if we want to continue changing lives of more amputee children in Colombia, we must work much more. Therefore, please consider the possibility of being a recurring donor to our cause and contribute even more to improve the lives of children with the same condition of Jesus.

I hope you enjoyed this story, you can find more information about us and our impact at www.mahavir-kmina.org or at Facebook, Instagram and Youtube. You can also send a message to subscribe to our newsletter by clicking here.

Thank you for your amazing support and I wish you good luck. 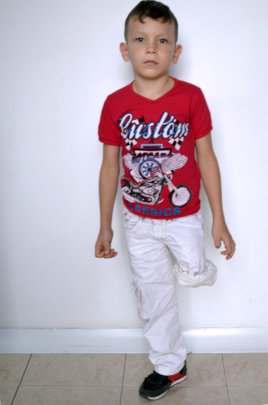 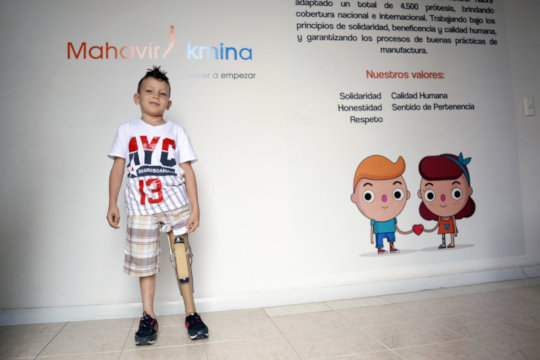 With the prosthesis, he started his school years.