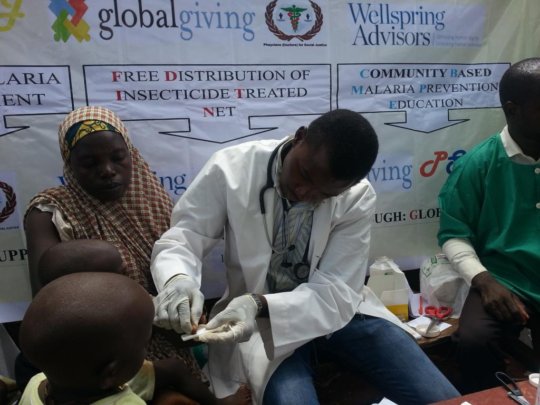 For this reporting period (Q1 2017), our malaria outreach team revisited Kwati village, a small village in rural Mashegu, which lacks modern health infrastructure and health personnel. The only village health volunteers in the community are those training by Physicians for Social Justice, PSJ, to provide essential first aid services to vulnerable children and families affected by HIV under the REACH project (Rapid and Effective Action Combatting HIV, which PSJ implemented in the community between 2011 and 2014).

As is the usual practice, our team paid courtesy visit to the village head and his council of elders on arrival. The village head and elders welcomed the malaria outreach team and expressed their gratitude to all the donors who made financial donations that enabled their people to benefit from the project. Thereafter, the outreach team proceeded to the village square where the community members and patients were already gathered and anxiously waiting. In order to provide maximal health benefit to the community members, the outreach was synchronized with other health promotion packages including distribution of multivitamins to pregnant women and lactating mothers; Albendazole (deworming treatment) and vitamin A supplementation for children under-five (made possible thru donations from Vitamin Angels) ; as well as HIV Counselling and Testing (HTC) offered to all community members.

Our outreach medical team comprised a consulting physician, two nurses, laboratory technician, and one pharmacy technician, provided both preventive and curative malaria services to both children and pregnant mothers free of charge. All cases of fever among children and pregnant women that presented to the consulting physician during the outreach were subjected Rapid Diagnostic Test (RDT) to diagnose malaria. Those who tested positive were immediately provided with the full course of Artemisinin Combination Therapy (ACT), made possible by you, our donors.

Immediate results of the outreach include;

At the end of the malaria outreach, community members expressed their deep grateful to all those who made the malaria outreach possible, most especially all our global giving donors. A 26 year old mother testified as follows- "During your last visit to our community some months ago, my two-year old son was having persistent fever for four days. We treated him with local herbs but the fever had persisted. I did not know what to do, and was already losing hope until the malaria team visited our village that fateful day. The doctor tested my son and said that he is suffering from malaria. The doctor gave him some medicines, and asked that I give him the rest at home for three days. The medicines worked like magic, the fever disappeared by the second day. My son has now fully recovered. They taught us that people who sleep under ITN are less likely to suffer malaria attack, and I make sure he sleeps under and ITN now, which was also given to us by the malaria team. They did not collect any money from me or the other women. Everything was given to us free of charge. They said some good people have already paid for the medicines and the ITNs. May God bless those who donated the medicines and the sleeping nets to us".

Once more, the testimonies of beneficiaries such as the 26 year old mother goes to show the depth of the impact of your donations in the lives of people in these communities we serve. Your donations made it possible for us to procure medical supplies such as the Insecticide treated Nets, malaria medicines including ACTs as well as pay for transport costs for the malaria team to reach these remote rural villages. Those five, ten dollars, and 200 dollars recurring donations, have added up to make such a huge difference in the lives of dozens of these poor rural dwellers. Your donations will save the lives of dozens of infants and young children as this year’s rainy season beckons; the period when malaria attack and deaths are highest.

Thank you very much for your generosity even in this hard economic period. Remain blessed! 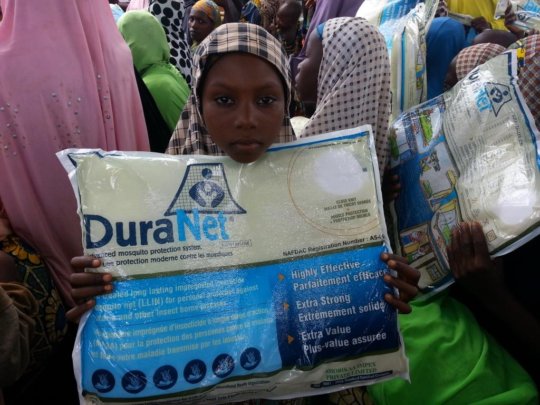 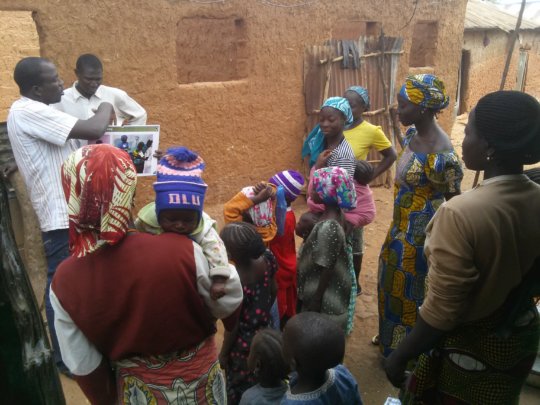 During this Q4 harmattan season, our malaria prevention and treatment outreach activities continued in six rural villages in rural Mashegu including Babanrami, Mulo, Sabon-rijia, Sahon-rami, Kaboji and Kawomulo. Our teams of IPC facilitators deployed to these villages continued their house-to-house visits to educate and sensitize community household members on malaria prevention practices (environmental sanitation), and encourage every caregiver and community member to seek appropriate malaria diagnosis especially for their children and pregnant women, as well as providing treatment for sick children down with malaria.

Because of your donations, between November and December 2016, we were able to reach 1911 households and 5315 caregivers with lifesaving messages including how infected mosquitoes cause of malaria, danger symptoms of the disease in children U5, need for early diagnosis, where they can access malaria treatment, as well as malaria prevention strategies including the use Long Lasting Insecticidal Nets (LLINS) and environmental hygiene.

Because of your support we procured and distributed 423 LLINS free-of-charge to households with vulnerable children under-five. Because of your generous donations, we acquired the tools and medicines that our team of clinicians administered on 7month old Rukkaya that saved her life. She had battled malaria for three days; her parents were losing hope of her recovering, before our team arrived their Sabon-rijia village. On presentation, she tested positive for malaria (using Rapid Diagnostic Test, RDT), and was immediately commenced on parenteral anti-malaria therapy. Three days later, she made full recovery. Children like Rukkaya owe their future to your generosity, for making it possible for them to live beyond their fifth birthday. The team also treated 207 other children U5 who presented with symptoms of malaria (after RDT confirmation) with free Artesunate Combination Therapy (ACT) in line with WHO recommended treatment guideline for malaria treatment.

Like Rukkaya’s parents, we at Physicians for Social Justice, are also grateful for all your support, and for making it possible for us to reach these vulnerable children. END. 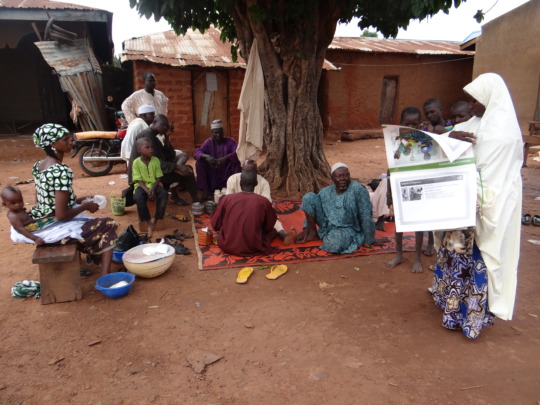 During this reporting period the Preventing Childhood Malaria team implemented a month-long malaria prevention and treatment outreach activities in Sahon-rami and Kaboji villages in rural Mashegu.  Among other strategies, the outreach interventions focused on house-to-house mobilization of caregivers, households and communities members to build and sustain community support for appropriate malaria prevention, diagnosis and treatment behaviours, including mobilizing communities to prioritize the health and wellbeing of their children, and to set malaria-free health goals. In this regard, PSJ’s team of trained IPC community-based facilitators conducted series of Inter-Personal Communication (IPC) sessions to create demand for available malaria services, educating community members about malaria prevention and promoting health-seeking behaviour among care givers, which is key to tackling the scourge of malaria deaths in our environment where at least 30% of all hospitalizations among children-5 is due to malaria.

In this regard, PSJ deployed six teams of trained Interpersonal communication facilitators to the two villages to encourage every caregiver and community member to seek appropriate malaria diagnosis and treatment for their children. This becomes even more pertinent considering the fact that Nigeria loses about 2,300 children under-five every day, and at least 25 percent of these deaths are due to malaria.

At the end of the month-long campaign, over five hundred households was visited, and one thousand three hundred and seventy three caregivers were reached with key messages including cause of malaria, symptoms, adverse economic impact of malaria, and effective malaria treatment, need for early diagnosis, as well as malaria prevention strategies including the use Long Lasting Insecticidal Nets (LLINS) and environmental hygiene.

Also, two hundred and nine LLINS were given free to households with children under-five, thanks to the donations we received from donors like you. Also one hundred and nine sick community members mostly children who presented with symptoms of malaria had Rapid Diagnostic Test (RDT) for malaria diagnosis and the sixty two children who tested positive to malaria received free Artesunate Combination Therapy (ACT), which is the WHO recommended treatment for malaria in Nigeria. A case in point is that of a sick two-year old boy named Tahir, who presented with high fever, tested malaria positive and instantly received full doses of ACT in addition to LLIN to prevent future illness due to malaria. Without this malaria outreach intervention, Tahir’s parents could not have been able to afford the $2 worth of ACT and $5 worth of LLIN that Tahir received. Every day, parents like Tahir’s who live on less than $1 a day are full of gratitude to you our donors for restoring the health, wellbeing and dignity of their children through your contributions, that is making the 'right to health' a reality, in the life of poor rural villagers in rural Mashegu. Like Tahir, we at Physicians for Social Justice, also say thank you for all your support, and for donating over and over again to our project; Preventing Childhood malaria Deaths in rural Mashegu. END.