Another harmattan outreach in Kawo village 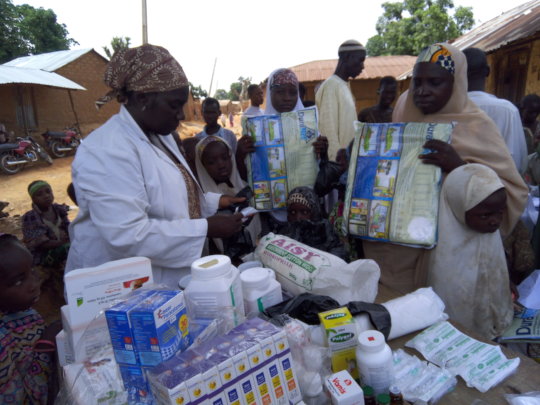 Within this reporting period, in December 2017, PSJ’s mobile health team revisited Kawo-Kontagora community and their vulnerable households with targeted malaria prevention education, prophylaxis, testing & treatment services, and insecticide treated nets distribution.  The outreach visit provided another opportunity for the malaria team to reinforce already delivered messages to families about ways of malaria prevention. Our health team continued to emphasize and educate families especially nursing mothers on how to recognize early symptoms and signs of malaria and on the need for sick children especially the under-five children to be taken to health facilities to receive prompt medical attention. This is particularly important because most of the deaths due to malaria among under- five children in the communities we serve are due to delays in instituting treatment for such children. Thousands of young children who suffer acute attacks of malaria frequently develop complications such as anaemia and convulsions, because they do not receive prompt treatment, and such complications are usually the cause of their death.

Our health team delivered health talk to the villagers on the importance of sleeping inside insecticide treated nets, which our team had already provided free of charge to most of the households during our previous visits. Pregnant women were educated on the dangers of malaria for themselves and their unborn babies, and had the opportunity to be tested for malaria using the rapid diagnostic test kit for malaria.  A total of 375 community members received health education, 62 nursing mothers and pregnant women had RDT tests and 50 ITNs were given out to nursing mothers and pregnant women. 42 sick children who tested positive to malaria were treated with artesunate combination therapy (ACT), while 34 pregnant women received antimalarial drug prophylaxis, administered by the  primary care physician who accompanied the mobile health team.

Community members were very grateful to the team and our donors for remembering them once again, even as they expressed delight at the ITNs given to them free of charge. On behalf of these communities we serve, Physicians for Social Justice expresses our deep and profound gratitude to all our donors who have contributed to this project.  We know some of you have donated over and over again to this project. Your donations have saved thousands of lives, and just imagine how many more children would have died of malaria without your donation last year. Your donations added up to raise over $9000USD in support of our work in 2017.  May the year 2018 bring fulfilment and prosperity to all of you. 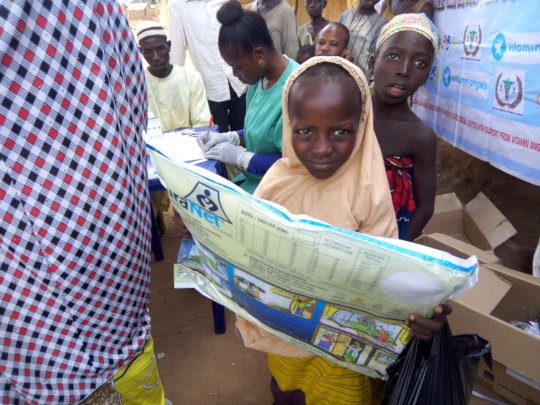 As we approach the end of the rainy season, we can only be grateful to all our donors for your generosity these past months in supporting our malaria team with the required medicines, diagnostic tools and medical supplies that enabled us effectively serve the communities that form part of our catchment areas for were malaria control efforts during the peak rainy season, when malaria transmission and deaths are usually highest. Through your generous donations and support, we reached 2400 families and households in eight rural villages with targeted malaria interventions including free distribution of insecticide treated nets, malaria prevention education and chemoprophylaxis. Our service delivery efforts were focused mainly on pregnant women and under-five children who are among the most vulnerable groups to malaria attacks and deaths in this region. We also boosted malaria prevention health behaviours among vulnerable families residing in remote rural villages that we have prioritized in our work. Nigeria’s malaria statistics shows that more than 50percent of pregnant women will have at least one episode of malaria during pregnancy which in some cases progresses to severe anemia-in-pregnancy (low blood levels in the body, resulting in increased risk of maternal and child deaths.

During our last outreach in rural Kontagora, our team treated 154 children for malaria attack using artesunate combination therapy (ACT), and also provided 42 pregnant women with Intermittent Prophylactic Treatment (IPT), as recommended by World Health Organization. The malaria team also educated caregivers about the importance of environmental sanitation (clearing bushes around their houses and not leaving any standing objects that could collect stagnant water), early clinical signs and symptoms, the role of mosquitoes, the need for early diagnosis and treatment and using insecticide treated nets, as well as the importance of seeking early treatment at the earliest suspicion of malaria (fever and or generalized body weakness), from the two trained community-oriented resource health volunteers resident in their communities.

On behalf of the children and communities we serve, Physicians for Social Justice is immensely grateful to all our donors for donating generously to our malaria project through GlobalGiving platform. We thank you very much for your generosity. We thank you in a special way for donating over and over again to this project. Indeed, this Preventing Childhood Malaria Deaths Project has come a long way. In the coming months, we shall be telling you the extent of the impact you have made in the lives of children and people in the communities we serve over these past years. We are indeed very grateful. The children, women and the entire villagers are very grateful as well. Because of you, we have beautiful testimonies from the likes of Salamatu, a 22 year old - "Thank you for visiting our village with your health workers and free medicines for our children. Now that I have been given a mosquito net ( ITN), I will have less to worry about malaria for my 1-year old son again. Thank you for treating diagnosing and treating her for malaria free of charge.  We thank all who paid for the nets on our behalf". 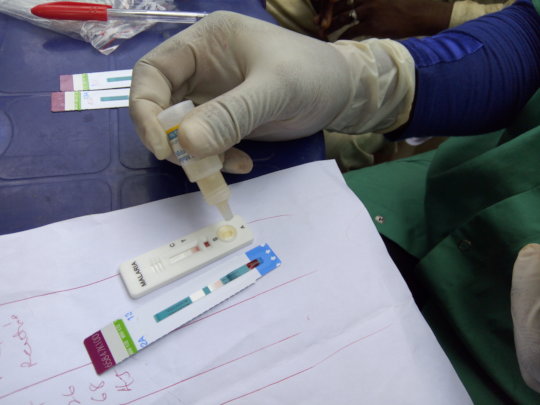 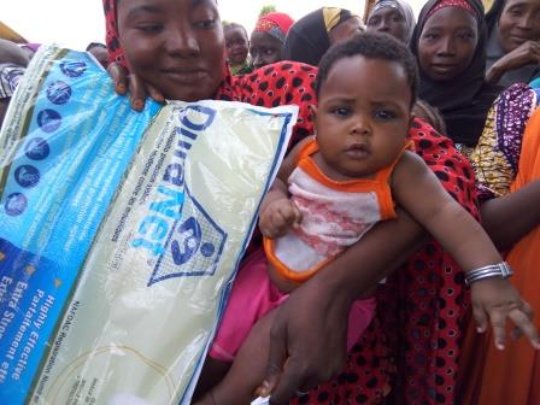 “With this Long Lasting Insecticidal Net (LLIN), my infant daughter now has a chance to live through her first and fifth birthday and beyond. I have witnessed the deaths of other young children in our village, who developed high fever and convulsions and succumbed to their illness, which was most likely malaria. Thank you Likita (Doctor) for giving us this mosquito net (LLIN), help us to thank all those who provided the resources for you and your health team to visit our community. We cannot thank them enough”. The above statements were the elated remarks of the mother of eight (8) month old baby Hannatu, who was among the beneficiaries of our LLIN distribution and malaria treatment outreach under the ‘Preventing Childhood Malaria Deaths in rural Mashegu’ project of Physicians for Social Justice, PSJ. In early July 2017, our mobile health team conducted an integrated malaria outreach visit to Hannatu’s community, Kawo, a rural village inhabited mainly by poor peasant farmers who are daily confronted with poor health and sanitation facilities, that often results in preventable deaths among infants.

Having witnessed firsthand the devastating impact of malaria in the lives of infants and young children, Hannatu’s mother fully appreciates what difference just one Long Lasting Insecticidal Net (LLIN) can make in the life of her infant daughter. So, when she heard the village announcer going round the village to announce the arrival of PSJ's outreach health team, she hurried to the village square to stand in the LLIN distribution queue and waited patiently until she received one. She was extremely elated, and could not hide her joy. Like Hannatu’s mother, hundreds of mothers in rural Mashegu recognize that receiving an LLIN or timely malaria treatment for their sick children, is often what makes the difference between life and death for their infants and young children.

The outreach to Kawo village offered both preventive and clinical health services that included the use of Rapid Diagnostic Test Kit (RDT) to confirm malaria case, distribution of Long Lasting Insecticidal Nets to children and pregnant women, treatment of malaria confirmed cases with Artemisinin Combination Therapy (ACT), as well as health talk on environmental hygiene targeted at malaria prevention.

A total of 104 sick children and 52 adults including pregnant women tested for malaria using RDT kit. Of this number, 56 children (30 males and 26 females) tested positive for malaria, and were treated with Artemisinin Combination Therapy (ACT). Also, 120 LLINs was distributed to households having under-five children, pregnant women and nursing mothers.

For some of the project beneficiaries in Kawo and other villages we recently visited, including pregnant women and children, it was the first time they had an LLIN either of their own or for their infants/ young children. Because of this project, tens of hundreds of children in rural Mashegu and surrounding villages achieved the milestone of witnessing their fifth birthday alive.  Because of this project, thousands of nursing mothers were saved the nightmare of sleepless nights due to high fevers, convulsions and associated complications attributable to malaria.

This malaria health outreach to Kawo community was sponsored chiefly from the massive donation we received via the Ford Foundation Matching Gift Program which was made possible by our staunchest supporter; Bess Rothenberg, PhD, who also continues to make recurring personal donations to this project. We also acknowledge the immeasurable contributions of all our other donors whose donations have made it possible for us to procure medical supplies including Long-Lasting Insecticidal Nets, malaria medicines (Artesunate Combination Therapy, ACTs), Rapid Diagnostic Test Kits as well as to pay for transport costs for health workers (community physicians, nurses and midwives, pharmacy & laboratory technicians) to reach these remote rural villages to provide life-saving clinical and preventive health services. On behalf of the communities we serve, we thank you immensely for all your donations and support to this project. The testimonies of project beneficiaries such as the mother of 8 month-old Hannatu demonstrates beyond doubt, the positive health outcome and impact of your donations to the health and wellbeing of children in these rural communities. Thank you very much! 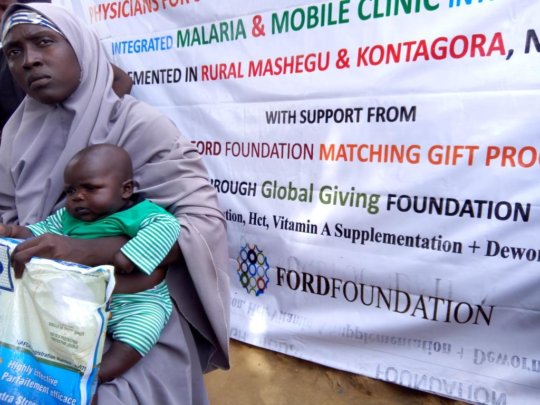 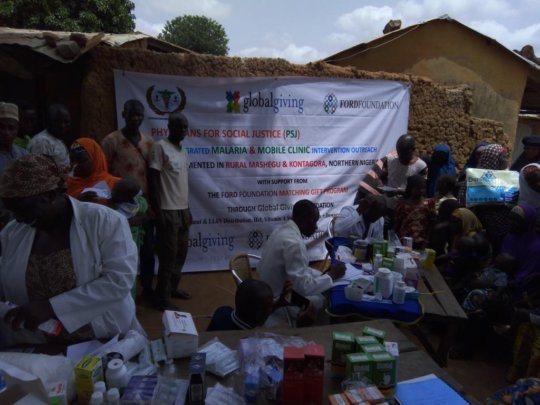 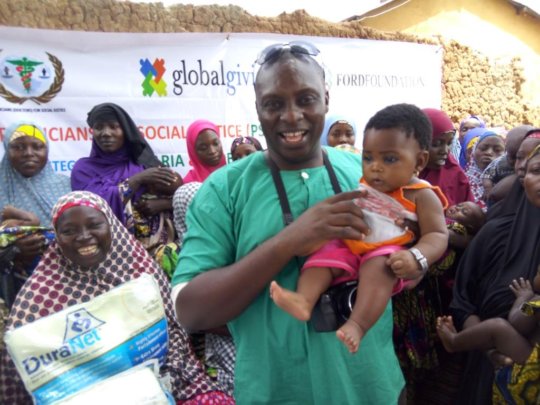 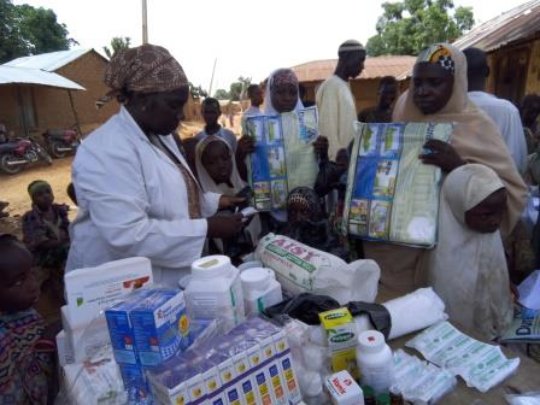 HW providing mProphylaxis & LLIN to pregnant women
‹ 1 2 3 4 5 6 7 8 9 ... 13 ›
WARNING: Javascript is currently disabled or is not available in your browser. GlobalGiving makes extensive use of Javascript and will not function properly with Javascript disabled. Please enable Javascript and refresh this page.