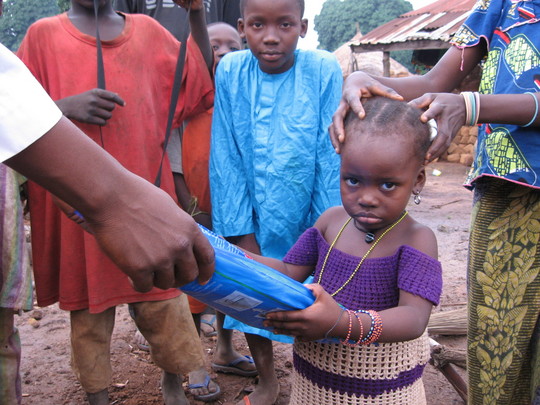 An OVC recieving ITN from PSJ malaria in sabonriji

In the past 9 weeks, we have been focusing on orphans and vulnerable children (OVCs) in rural Mashegu. More than any other factor, HIV/AIDS is the single highest contributor of OVCs in Mashegu.

As part of our general health and well-being support, Physicians for Social Justice has been distributing Insecticide Treated Nets (ITNs) to OVCs and their households as part of the comprehensive care and support services to improve their quality of life.

Until date, 187 OVCs and their households in four rural villages with targeted malaria interventions including free distribution of insecticide treated nets, malaria prevention education and chemoprophylaxis and treatment for malaria cases. The ITNs are especially important for the OVCs as we are in the peak of rainy season, the period when malaria transmission and deaths among children is highest.

The project team is very grateful for all those who made donations to our Malaria project. We thank you very much for donating over and over again to this project. We are indeed very grateful. Your donations through the Global Giving Foundation Website have no doubt saved hundreds of vulnerable children from repeated deadly malaria attacks. 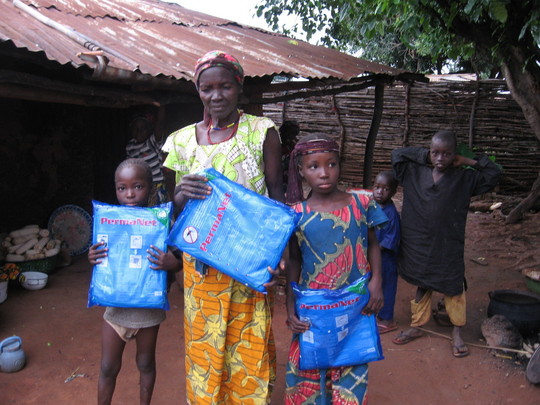 OVCs and their grandmother recieving ITNs 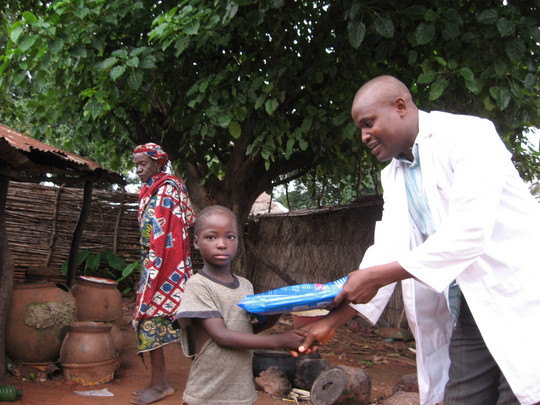 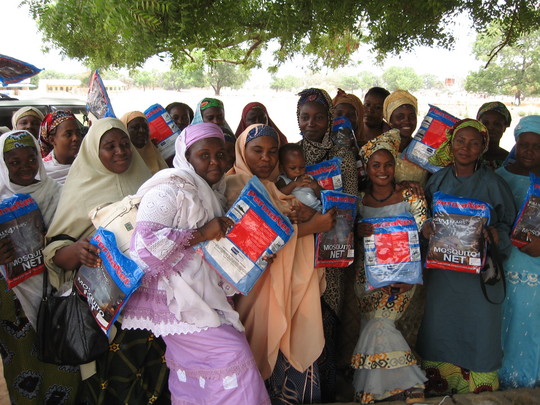 Based on the emerging evidence that our behaviour change communication strategy is creating positive attitudes and behaviours for better malaria control outcome in the communities we serve, PSJ’s malaria team continued to focused our efforts to educate families about malaria prevention through environmental sanitation and consistent use of insecticide treated nets during the past three months.

For this reporting period, we focused our efforts on pregnant mothers who are among the most vulnerable groups to malaria attacks and deaths in this region. Our aim is to boost malaria prevention health behaviours among this group. National statistics shows that more than 50percent of pregnant women from the communities we serve will have at least one episode of malaria during pregnancy. And this often contributes to severe anaemia (shortage of blood in the body) in the pregnant mother, resulting in increased risk of maternal and child deaths.

Our malaria prevention team visited villages in and around Kontagora community. The team educated women about intermittent preventive treatment, the importance of using insecticide treated nets, and the absolute need to seek early treatment from health workers at the earliest suspicion of malaria (whenever they develop fever or generalized body weakness or feel generally unwell as these are often the first symptoms of malaria). In addition, we distributed 75 long lasting insecticide treated nets (ITNs) to pregnant mothers.

Our efforts in these past three months would not have been possible without the support of our donors whose financial donations made it possible for us to procure medical supplies such as the ITNs and malaria medicines and pay for transport costs to visit these communities. Those one, five,ten, twenty, fifty dollar donations have added up to make such a huge difference in the lives of dozens of these poor rural mothers. Your donations will save the lives of 75 pregnant mother and their babies this rainy season, the period when malaria attack is at its peak. Once more, on behalf of the communities we serve, we say thank you for all your financial support. We are really very grateful for your support!

Consolidating on our new strategy of targeted house to house malaria prevention campaign, our malaria project continues to make positive impact in the life of people in poor communities in rural Mashegu. The new strategy is much more effective as it provides us the opportunity to offer customized recommendations to individual families on simple environmental engineering and behaviour modifications that will eliminate malaria vector breeding sites. Within this reporting period, we conducted outreaches in four villages, namely Bokwai, Kaboji, Sabon-rijia and Mulo. The project reached 1300 vulnerable households with targeted malaria prevention education, prophylaxis, treatment and insecticide treated nets. The house to house visits provided a unique opportunity for the malaria team to educate families about malaria prevention through environmental sanitation. In particular, elimination of mosquito breeding sites was emphasized as we approach the onset of rainy season when malaria transmission is highest.

We continued to emphasize and educate families especially mothers on how to recognize early symptoms and signs of malaria and on the need for sick children to receive prompt medical attention. This is particularly important because most of the deaths due to malaria among under five children is due to delays in instituting treatment for such children. Thousands of young children who suffer acute attacks of malaria frequently develop complications such as anaemia and convulsions, because they do not receive prompt treatment, and such complications are usually the cause of their death.

Our malaria team also continued to focus on school-based malaria education sessions for 450 children in the four community primary schools in these villages. Children who participate in these educational sessions now serve as messengers, taking what they have learnt to their various homes. There is the case of Abdullahi, an 8 year old primary 3 pupil, who after participating in our malaria education session went home and convinced his father to embark on environmental sanitation; to clear the vegetations in their house and remove all stagnant water in their surroundings in order to eliminate mosquito (malaria vector) breeding grounds.