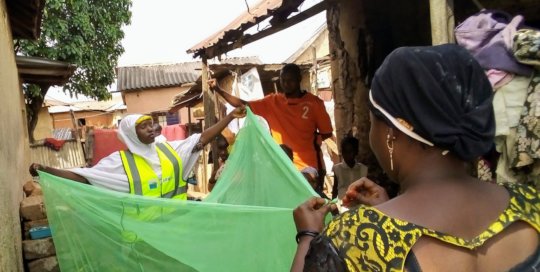 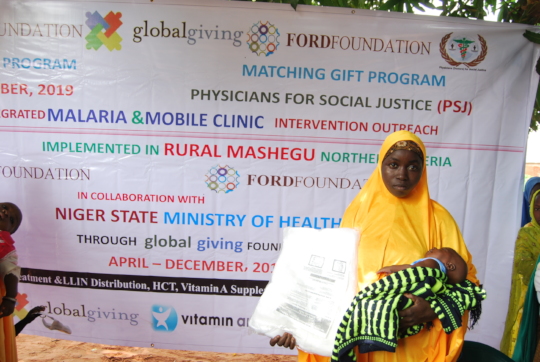 Nursing mother shows off her LLIN at Adogo village

On behalf of the communities we serve in rural Mashegu, we start this update report with an expression of our profound gratitude and sincere appreciation to our donors for their generous donations towards supporting our malaria prevention project. We are especially most thankful to Ford FoundationMatching Gift Program (via GlobalGiving) for generously supporting the mobile health camps and malaria prevention outreach activities in Adogo and Kaboji communities and surrounding villages.

This reporting period (Quarter 2 of 2019) Physicians for Social Justice, PSJ, team of clinicians, community health workers and mobilizers conducted back-to-back Integrated Malaria outreach and Mobile health camps in Kaboji and Adogo communities in rural Mashegu. To reach underserved villages in and around Adogo community, the team drove for over two hours in a four-wheel drive truck loaded with lifesaving anti-malaria medications and other medical supplies. Adogo and its surrounding villages are hard-to-reach with most of its inhabitants engaged in peasant farming. For these communities, one of their biggest concerns include the poor state of maternal, newborn and child health in their community, malaria being a major contributor.

The mobile health camp in Kaboji and Adogo communities successfully reached 1,578 women mostly pregnant women, breastfeeding mothers and under-5 children were tested for malaria using rapid diagnostic test (RDT). 1444 community members who tested positive to malaria were treated with Artesunate Combination Therapy (ACT) including 607 children and 807 women. Also 150 pregnant and nursing mothers were provided with Long-Lasting Insecticide Treated Nets (LLINs). For mothers like 21year old Ramatu, the visit of the mobile health team to her village in Adogo was a life saver for her 9months old baby boy, Hassan, who had been running high fever. With no money to travel to the neighbouring town to visit the health centre, she had arrived the venue of the mobile outreach at around 7 am and waited patiently for over two hours for the mobile health team to arrive. Using RDT, baby Hassan was diagnosed malaria positive and was promptly treated with ACT and antipyretics. Two days later, the baby Hassan made a full recovery which her mother, Ramatu, described as ‘miraculous’. She was full of gratitude to all our donors who made Hassan’s access to free treatment possible through their donations.

In addition, community members were sensitized on malaria signs and symptoms, as well as prevention measures, which include sleeping under LLINs and draining away stagnant water in their homes and surroundings. In addition to malaria. The mobile clinic and health campaign also provided medical consultations and treatment for villagers on other ailments, such as body aches, ulcer, diarrhea, typhoid, skin lesions, and worms. 664 Children received Vitamin A capsules (200,000UI and 100,000UI) and Albendazole for de-worming, while 562 pregnant and breastfeeding mothers received multivitamins..

The two mobile health camps were conducted timely during a period when the incidence of malaria cases spike in this region as the SW monsoon winds usher-in heavy rains which provides a fertile breeding environment for malaria vector, female anopheles mosquitoes,  For the predominantly farming population in Kaboji and Adogo communities, the situation is exacerbated by the lack of proper drainages as well as widespread shortages of long-lasting insecticide treated nets (LLINs). Additionally, owing to poor healthcare infrastructure, access to Maternal and Newborn Child Health services are very limited in rural communities like Adogo.

Once again, the entire PSJ team are grateful to you our donors for all your generous donations in support of this project. Thank you. 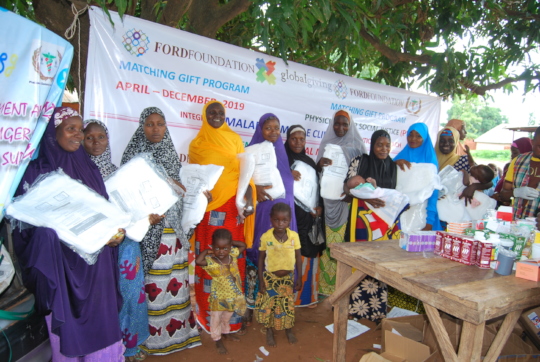 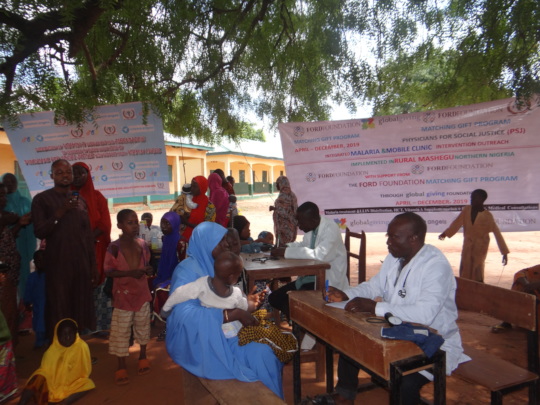 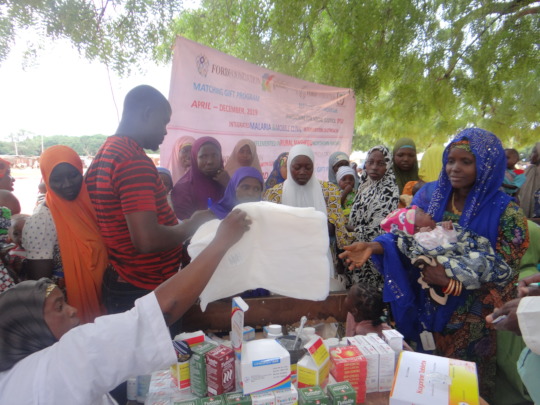 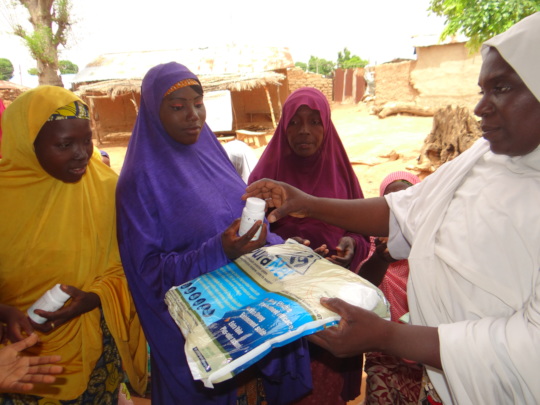 For this reporting period, in early May 2019, our malaria outreach team led by a community health clinician revisited Kawo village, a rural community in Kontagora. Kawo is a memorable community for our team, because of the extreme hospitality of its people; the first time we visited Kawo village, its women, children, young and old beamed with contagious smiles. They were practically ecstatic and extremely happy to receive our mobile clinic team. On arrival this time, the mobile health team paid courtesy visit to the village head and his council of elders. The community leaders welcomed our team, and thanked us for remembering their community once more.

Once we finished with the initial community entry formalities with the community elders, the mobile health team proceeded to the village square where pregnant women and nursing mother were already eagerly awaiting the arrival of the mobile team. The team quickly settled down and provided both preventive and curative malaria services to infants as well as nursing and pregnant mothers using medicines provided with donations received from our globalgiving donors. All cases of fever among children and pregnant women were screened for malaria using the malaria Rapid Diagnostic Test (RDT) while those who tested positive were given full course of Artemisinin Combination Therapy (ACT).

Nigeria currently accounts for 19percents of the global burden of malrai (WHO). To bridge the treatment gap among children in rural communities such as Kawo, Physicians for Social Justice is fully adopting and implementing World Health Organizations, WHO’s, recommended uptake of integrated community case management (iCCM), as strategy to  promote integrated management of common life-threatening conditions in children – malaria, pneumonia and diarrhoea especially at the community levels

Community leaders, caregivers and women were full of gratitude to the team for once more showing solidarity and coming to their aid in their battle with malaria. The pregnant women were particularly joyful for the ITNs distributed to them, knowing fully well that the rainy season has arrived; and that is the period when malaria transmission is highest. This gratitude was examplified by Maimuna, a young pregnant woman who beamed with smile, bowed in deep appreciation, and uttered the word 'mungode, mungode, mungode gaskia', in local diaect (translated ' thank you so so so much') when she was handed a piece of ITN.At the end of the malaria outreach, community members expressed their deep grateful to all those who made the malaria outreach possible, most especially all our global giving donors. Community leaders were also full of thanksgiving to the team and you, our donors for once more remembering their village in health care service delivery.

The entire mobile clinic team, on behalf of the communities we serve, once more express our profound gratitude to all our donors who have donated generously to make these malaria mobile clinic outreach activities possible; for us to procure the malaria medicines, the insecticide treated nets, as well as being able to pay for transport costs for the malaria team to reach rural communities like Kawo. Sleeping under ITNs alone dramatically reduces the chance of contracting malaria for infants and pregnant women. Be assured that your donations have made really huge difference in saving lives.