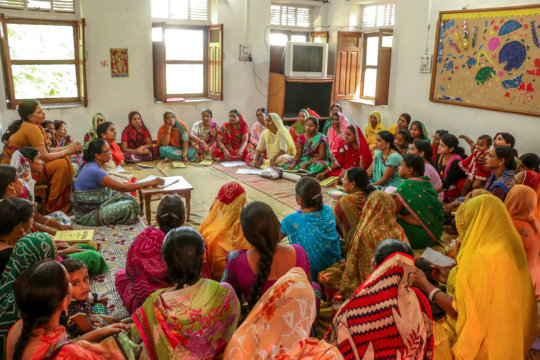 With your precious support last year we provided support to 109 women and 2 men through shelter and counselling. Shelter was provided to 94 women along with their 75 children. Thank you so much for all your help and support.

Rashmi (name changed) is from a rural area close to Udaipur city in southern Rajasthan. In 2003 she got married and after some time two beautiful children enriched and completed her family. Around eight years after marriage, problems started, as her husband started drinking and beating her regularly. Rashmi endured domestic assault for several months.

In 2013 Rashmi arrived for the first time at Seva Mandir's Short Stay Home. Since then, she has resided in there three times, during which she was given full assistance, she was counselled and joint meetings with her husband were held to help the couple to get over the difficulties. The husband tried to take her back for several times, but his promises of not beating her and not drinking anymore failed as the violence took place again.

She came back for the fourth time in 2015, and she has been living there for almost a year. During her last staying she had also found a job in a nearby Mall. Rashmi has been supported and counselled, legally adviced and guided, in order to help her making the best decision and start a new life. Many efforts have been taken to deal with the plight and Seva Mandir helped her during her staying to find a job and to become financially and emotionally independent.

This is just one of the stories of cruelty and abuse affecting women living at the Short Stay Home. Many of them have happily gone back home, re-establishing old bonds with their husbands. However, as Rashmi's case shows, the reality is more often difficult to face, especially when violence becomes endemic and it's fuelled by social diseases such as alcoholism.

Thank you, as always, for your continued support. 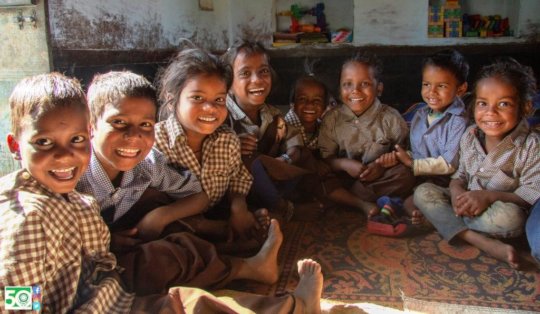 Wishing you and your family a very Happy New Year!! May this New Year brings with it an abundance of joys and infinite happiness to you!

Thank you for your support to our project ‘Fighting Malnutrition Through Child Care in India’. Your support is bringing real changes in the lives of small children.

Seva Mandir, which was initiated in 1968, works in more than 1300 tribal villages of Rajasthan with the mission of ensuring that the poorest members of the society have access to quality education, health care and stable livelihoods by empowering every individual to create a true democracy.

One of the most vulnerable groups with which Seva Mandir works are young children. Huge poverty faces parents to work to make ends meet and so often mothers of young children are unable to look after their children properly. Either the mothers have to carry young children to agriculture field, forests or labor sites or leave them in the care of elder siblings who themselves are quite young. As a result, children suffer from lack of security, care, health and full development. Seva Mandir runs Balwadis, day care cum pre-school centers which provide care, health and pre-school education to such children.

Ghanashyam attends a Balwadi located in Kotra block, one of the poorest areas of India. The instructor of the Balwadi was told by a Balsakhi (woman trained by Seva Mandir to provide care to children) that the child was malnourished and the mother was leaving him at home while she worked in the fields. The Balsakhi told the instructor that the child was not being looked after properly and was in desperate need of the day-care service which the Balwadi provides. The instructor went to Ghanashyam’s house to talk to his mother, Bhuri, who was at first sceptical about leaving her child in the care of another person not from their family.

She gave excuses and avoided the Instructor, but he was determined that the child required appropriate care. After some persuasion, Ghanashyam was enrolled in the Balwadi in July, 2018. He was given fresh porridge with hot oil poured over it for extra nutrition and he receives a daily spoonful of iron supplement and six-monthly doses of Vitamin A.

When Ghanashyam enrolled in the Balwadi, he weighed 6.5 kg. In September 2018, after two months of regular care and nourishment, he weighed 7.5 kg. He is now in the ‘well-nourished’ category and his mother Bhuri is grateful that she decided to send her son to the Balwadi regularly so that he could become healthy and beat malnutrition.

It is due to generous support from friends like you Seva Mandir has been able to run these Balwadis. Currently 178 Balwadis are operational in tribal areas of southern Rajasthan reaching out to 5000 underprivileged children. A donation of $10 from you will help us in providing life saving nutritious meals to 1 child for 3 months. We look forward to your continued support.

Seva Mandir is delighted to congratulate long-time academic collaborators and supporters of its work, Professors Abhijit Banerjee, Esther Duflo and Michael Kremer, who have been awarded the 2019 Nobel Memorial Prize in Economic Science ‘for their experimental approach to alleviating global poverty.'

Thank you again for your generosity in choosing to support our project.

New Year Greetings and Wishes to You! 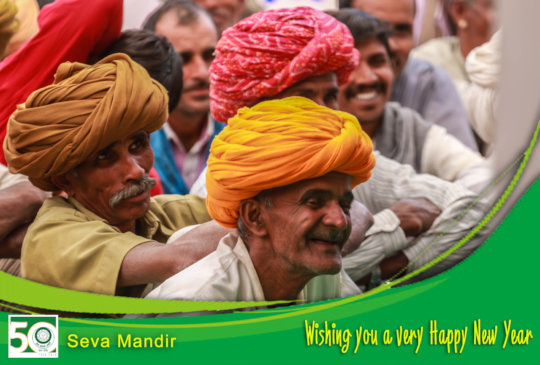 Wishing you and your family a very Happy New Year!! May this New Year brings with it an abundance of joys and infinite happiness to you!

Thank you for your support to our project ‘Empowering Villages in Rural India’. Your support is bringing real changes in the lives of our villagers.

Seva Mandir has always believed and worked towards empowering communities to take accountability of social transformation as the most sustainable way of moving ahead. Seva Mandir has nurtured its village development groups into spaces where people are able to actively participate in the decisions which directly affect their lives.

To further empower these village groups, the groups have been amalgamated into federations. These are multilayered, self-governing community institutions created by Seva Mandir to resolve larger-scale issues. The federations work on the social as well as financial issues of the region and liaise with various government as well as non-government agencies.

Jhadol is 50 kms away from Udaipur and is inhabited by mostly tribal population. Seva Mandir has been working very closely with village communities in Jhadol and that has resulted in strong village groups and federations in the region. The federation meets every month to discuss issues pertaining to their zones (each zone comprising 10-15 villages).

In May 2019 , Ogna zone in Jhadol proactively worked on an issue that helped not only the daily wage laborers of their zone, but for the entire region.

In order to ensure employment in village, government had launched a programme called Mahatama Gandhi Employee Guarantee Act (MNREGA) under which 100 days of guaranteed employment is ensured in villages. However, along with labor, the act also ensures other conditions like availability of a shady area for rest, toilet, crèche for children and first aid kit should also be ensured at the work site.

While working on one of the construction sites for a road, a woman got severely injured on her head. There was neither a first aid kit available nor a resting place on the work site and she had to be immediately rushed to a hospital. Despite terrible blood loss, the woman could be saved but the incident was an alarming situation for the federation. The federation collectively wrote a letter to the Chief Medical Officer (CMO) appraising him about the situation and demanding a medical kit at each work site for the region. The CMO also responded immediately to it and within a month, medical kits were made available at all MNREGA work sites in Jhadol.

In another effort by Phalasiya and Madri zone federations, a very old and regressive social ritual was collective discarded. During the festival of Holi, every year for a period of 15-20 days vehicles on highway used to be stopped by women and children to demand money from passengers. It was very risky and exploitative for people to travel during these areas. The federation members launched a campaign against this practice and discussed it with every village group. This year the number of cases reported dropped by 80% and the federation have committed to uproot this tradition completely by next year.

The federations are slowly transforming to highly active and responsible action groups which are challenging social norms and demanding quality in government services. They will be very instrumental in ensuring development remains ‘by the people’ and ‘for the people’ in the region. The localized understanding of these federations about grass root challenges is multi faceted and empowering them to take collective action can bring profound changes in the lives of people.

We would like to thank you for letting us meet our commitments in the field. All this has been possible due to your consistent support and trust in us.

Seva Mandir is delighted to congratulate long-time academic collaborators and supporters of its work, Professors Abhijit Banerjee, Esther Duflo and Michael Kremer, who have been awarded the 2019 Nobel Memorial Prize in Economic Science ‘for their experimental approach to alleviating global poverty.'

Thank you again for your generosity in choosing to support our project.

‹ 1 2 3 4 5 6 7 8 9 ... 139 ›
WARNING: Javascript is currently disabled or is not available in your browser. GlobalGiving makes extensive use of Javascript and will not function properly with Javascript disabled. Please enable Javascript and refresh this page.