What we are doing in the time of Covid 19 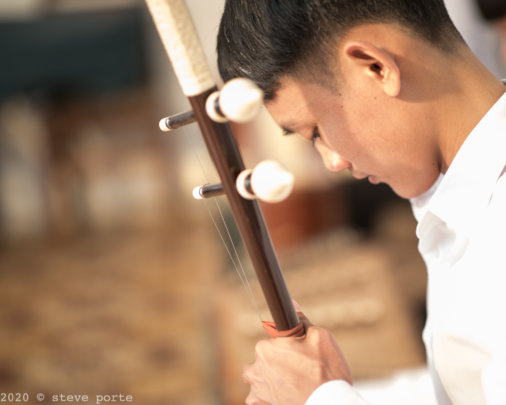 One of our blind students studying the Tro

Thank you all so much for your donations and kind help these last few months. We deeply appreciate your care towards our school.

Our school has two main programs. The first is our Residential Program where children who have lost their parents, or who have been abandoned and abused can live at our school full-time in peace and safety. Additionally we also have blind children and youth resident at our school. All our children resident have state school lessons, receive complete care, study traditional Cambodian arts and older children have vocational training. For our blind youth their academic lessons are accompanied by a Braille teacher and they use Braille materials. They also study physiotherapy and have computer lessons as well as music lessons, in order to increase their knowledge and skills to equip them for adulthood.

Our second main program (this very project that you are sponsoring) which is free Traditional Cambodian Arts tuition for impoverished children and youth. Some of our programs are cyclic, so for example we taught 450 children from Di Pok school, we also trained musicians from local pagoda schools before them. We taught disabled children and youth in coordination with Epic Arts and we have helped extremely poor children by providing their basic needs as well as giving scholastic education and arts training. Our new programs to train college students in Cambodian arts, as they prepare to become primary and secondary school teachers and high level training in the arts as vocational training for poor state school students, has had to be postponed due to the Coronavirus (Covid-19).

Our school is now in isolation, with some external staff now staying at their homes and receiving their salaries, whilst other residential staff observe strict rules to avoid contamination. Some of our resident children have serious health issues like HIV, epilepsy, asthma etc; and we must protect them and our staff.

Some of our blind youth with underlying health issues are now with their families in their remote villages and we stay in touch with them by telephone. They will return after the Khmer New Year. The rest of our resident children have nowhere else to go and we are their home and we will always take care of them at our school for as long as they need. In fact most of them come as young children and then graduate as young adults.

We will inform all donors on GlobalGiving through a new report when our Second Program activities commence again.

Thank you so much for your understanding.

Our school wishes everyone well and we wish you all good health and safety.

With love from us all

How our School is Coping with Covid-19 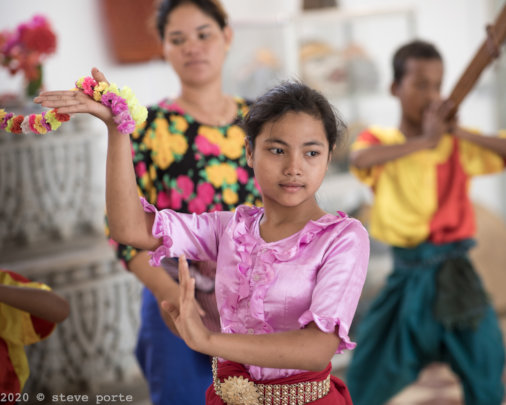 Thank you all again for your marvelleous support. It's so wonderful for us to know that you are there, some of you have been helping us for years.

We were recently asked by the local authorities to urgently help six young children originally from three families. Four of the children from two families had been abandoned by their parents and had no adequate family care-giver, no home or support. The parents of the fourth little girl had died and she had not received proper care since and was severely emaciated.

Last month we also took into our school a young boy of twelve, who had lost both his parents and after extensive background research, it was found he had been wandering the streets for six years! All our new children are doing well and have lots of happy moments of playtime with our other children.

At the end of April a blind youth will come to join us too and so add to our group of blind children and youth on our vocational training and rehabilitation program. Our older blind students have been doing a phsyiotherapy course, on top of their music and education classes. Their physiotherapy lessons which were held in a therapy centre have had to be stopped due to Covid-19. We will continue when all is well again.

In mid-January after noting news from Wuhan, China, I requested our school to observe the hygiene measures recommended by the World Health Organisation, to ensure that the Covid-19 virus was not spread to our school. Recently there have been signs that Covid-19 is picking up speed in Cambodia and so I have requested our school to follow the protocol for Lockdown. Resident staff and children won't leave our school and only our cook is able to go in and out, together with our director and accountant, but they observe rigorous hygiene practices and safety measures to safeguard their own health and ensure that they don't spread the virus.

Some of our external staff are now taking leave, especially those with pregnancies or older staff with health issues. They will continue to receive a stipend. All our external staff have been asked to observe lockdown with their own families. Our director Mr Sothy has stocked our school with rice, cooking oil and canned fish. We grow some of our own fruit and vegetables and have our own fish in our fishponds.This is because there are no clear trading laws in Cambodia and speculation during war or disaster is rife and we would risk not being able to feed our children.

The Cambodian Government has shut-down all schools and universities to stem the tide of infection. Our own children no longer go to state school in the mornings, but they will follow a scholastic learning program in the morning inside our school and then in the afternoon they will continue their arts classes. There will also be lots of playtime and drawing...but all within our school. Thank goodness we have a lovely big garden with lots of trees! We are not only a school but also their home.

As  you know, most of our children have nowhere else to go and so we are dedicated to providing full-time care for them, whatever happens in the world outside.

Please join us for the Little by Little GlobalGiving Campaign from Monday the 23rd March to Friday 27th March. All donations up to $50 will be matched by GlobalGiving 50%.

To Donate Please go to our link is www.globalgiving.org/projects/education-arts-orphan-disabled-children-cambodia/

Every donation makes a difference.

Please may I take this opportunity to wish you all well and hope for healing in our world.

Students from 1994 Celebrate our 25th Anniversary 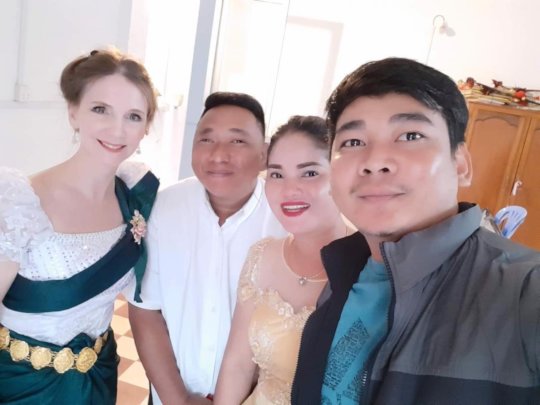 Former students from 1995 onwards with the founder

Dear Kind Friends and Supporters of our school,

Thank you so very much for your extraordinary generosity during our End of Year Campaign and Giving Tuesday, as well as all those who gave each month last year. In December we raised over $9,000 which is an amazing sum and such a big help to our school.

In December we celebrated 25 years since our school began. Our school was built during the civil war when the Khmer Rouge had their stronghold in Phnom Vor in Kampot. Some of our colleagues working in the countryside were killed by Khmer Rouge. There was shelling, a hostage crisis and a lot of the countryside was littered with anti-personnel mines.

Many of our students at the time had been badly affected by the war. Either they had lost parents because of crossfire or Khmer Rouge attacks, or they themselves were injured by mines. Some were affected by Polio when the disease was not yet eradicated.

This December we gave a big concert and many of our students from 1994 and onwards came and joined in. Some, who are professional musicians performed alongside our current students. Others brought their spouses and children. His Excellency Hab Touch, Secretary of State for Culture also attended and at the end we had a buffet underrneath the trees by our fish-ponds and then a big birthday cake. We also had an exhibition of archive photographs from 1992 when the founder was first given the land by the Governor of Kampot and what it looked like then, to actually building the school and the first students. At the beginning, the land was wasteland and had originally housed a Pagoda which had been moved by the french Protecterate. There remains today a Stupa with a Boddhi tree growing around it. The land of our school is considered sacred and for this reason, permission was given to build a Music School, because Traditional Cambodian Arts are considered sacred.

Many people attended the concert and could enjoy our performance and the exhibition in the main hall afterwards. Former students from 1994 also laughed at photos of themselves and the changes after a quarter of a century.

We are incredibly grateful and moved to have this opportunity and we would like to express our profound thanks to you all and to all those who have donated throughout the years, making it possible to keep our school open and running. 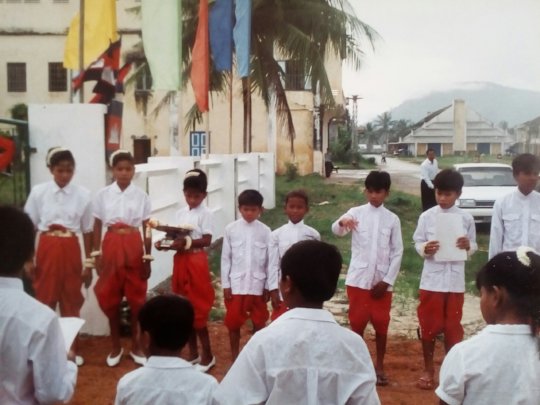 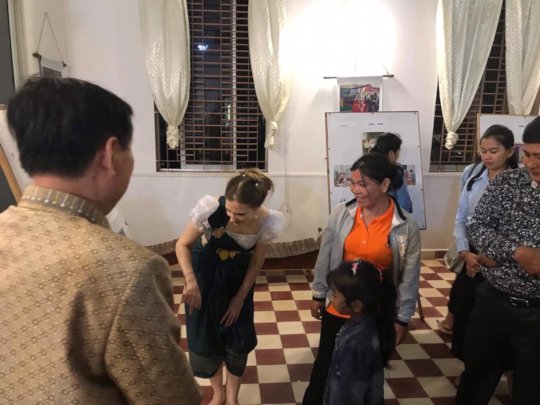 Khorn looking at her own photo from 1994 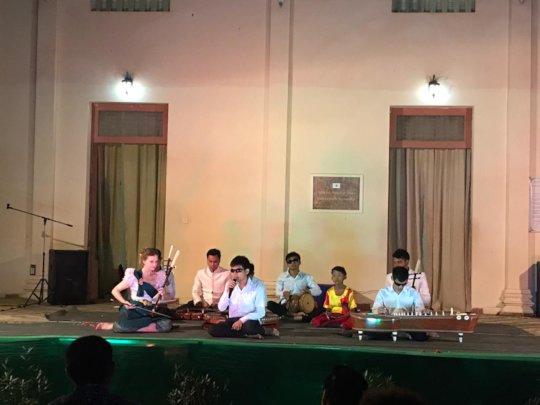